Clearing out someone's garage, I came across several sadly neglected rusty old planes. Any tips on how to identify them would be much appreciated.

Pic 1 shows two planes which are in the same style. The larger one has a Stanley lever cap, but nothing else about it looks like a Stanley. The sole plate appears to be pressed rather than cast. Pic 2 shows a second layer of metal underneath the front knob, and there is a similar arrangement at the back. No manufacturer's name visible anywhere.

Pic 3 shows two Stanley block planes. On the upper one the name is just visible on the knob at the back, but there is no number anywhere. I think it's a 9 1/2 but I'm not sure.

The lower one has a fragment of the Stanley name on its top, but again I don't know its number.

The 9 1/2 and the bullnose are keepers but the bench planes are something I have not seen before. Looks like they are made from steel channel. Budget end of budget. That said if the soles are reasonably flat then they may be made to work. Going by the thickness of the metal I would not be keen on lapping them any more than rust removal but it only takes seconds to check with a strait edge. The woodwork and hardware on them looks ok. I would be inclined to dust one down sharpen a blade and try it out just for the hell of it.
Regards
John
J

The other is Stanley 75 Bullnose Plane.


JohnPW said:
...The other is Stanley 75 Bullnose Plane.
Click to expand... 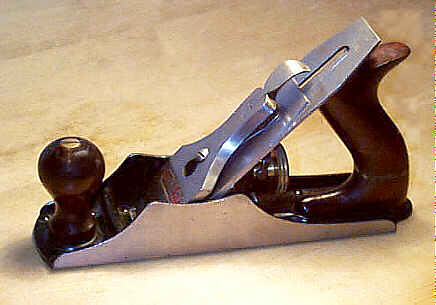 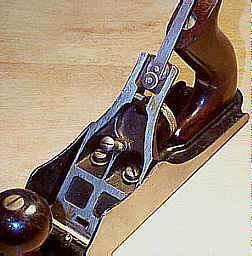 Patrick's Blood & Gore said:
...These planes beg abuse, and have a pressed or forged steel bottom. The steel is bent to form a U-shape. A piece forward of the mouth and rear of the mouth are riveted to the steel bottom. The lever cap and frog are made of malleable iron (the normal bench planes have their bottom casting made of gray iron), with the frog's casting having a noticeably coarser texture than those provided on the Bailey line.

The frog design is unique to this plane, and is not interchangable with other bench planes. The upper portion of the frog has concave sides, and resembles a glass long-neck beer bottle. The frog is adjustable with the same patent arrangement that was provided on the Bailey bench planes. I have seen some examples that have a spacer piece placed behind the fork that engages the frog adjusting screw...
Click to expand...

Thank you everyone for the replies, and thank you particularly to Vann for identifying the Stanley steel planes. I didn't believe they were really Stanley products when I first saw them. I thought the construction must have been just to make a cheap copy, but having read about them on "Patrick's blood and gore", I see that they were intended to be indestructible and people say they work well. There's a nice video on Youtube of someone restoring three of them.

I am in the UK and I have never seen one of these before, and I can't see any examples on Ebay. Does anyone know if they were made only in the USA?

RichardHants said:
...I am in the UK and I have never seen one of these before, and I can't see any examples on Ebay. Does anyone know if they were made only in the USA?
Click to expand...

I feel sure they were never made at the English Stanley works*, and certainly not at the Australian Stanley works. That leaves the USA and Canada. I have no idea if the Canadian works ever made them but I suspect it was a significantly smaller operation than the USA works, and therefore probably only made more mainstream planes.

* Stanley bought JA Chapman in December, 1936. I imagine they spent most of the pre-war years converting to producing Stanley's bigger selling planes. They never made No.1, No.2, nor No.8 cast-iron planes in the UK, and I don't think the No.5 1/4 either. So I doubt they would have set up to make the S4 or S5 as both lines were discontinued in 1942 (in the States at least). It's possible, but unlikely.

I've never come across one of these steel-bodied 4s or 5s in the flesh metal either, but they sound interesting. Patrick Leach doesn't denigrate them in any way & he's normally pretty quick to slam anything he thinks is a bit off the pace. In fact, he sounds borderline enthusiastic about them, which implies to me they are just as functional as the everyday cast variety, and certainly preferable if you are in the habit of throwing your tools on the floor to relieve temper tantrums...

I don't envy you the job of cleaning these two up, but if you do, it would seem you not only have a couple of potentially decent users, but some rather unusual (outside of the USA anyway) talking points for your shed/workshop.

Given that steel bodies are possibly more stable than cast-iron (I'm citing Bill Carter here), it's a wonder the must-have-soles-flat-to-Angstrom-units brigade haven't seized on them as the only planes to have........

PS> The woodwork looks in remarkably good condition, so the previous owner must've been more of the even-tempered type than the owners described by PL. Pity no-one thought to give 'em a good coat of vaseline or something before sitting them in the garage for 40 years!
Last edited: 11 Oct 2021
R

I'm not going to restore them myself, but I'm sure there are collectors out there who will jump at the chance. There's a Youtube video of someone in the USA restoring three of them, and at the end he tries them out and thinks highly of them.

I wonder why they stopped making them. Possibly because they look cheap, even if they aren't.
I

RichardHants said:
....I wonder why they stopped making them. Possibly because they look cheap, even if they aren't. ....
Click to expand...

I suspect it was simply a matter of demand. I can't find what they cost new compared with the ordinary 4s & 5s, but they probably cost more being a specialty line, so only those who needed/wanted the ruggedness would have sought them out. The average punter would have been unlikely to either know or care what the S line had to offer over the common garden variety 4s & 5s so they would not have been clamouring for them. The 'bedrocks' at least had their supposedly superior frog to justify extra cost, but they don't really perform any better & they too went the way of the dodo as industrial-scale handwork slipped into near-oblivion after WW2.