Runner beans. We have now exceeded last years crop (37lbs 10ozs.) and still about another 10 days cropping to go.

Cucumbers some but way down on last year.

strawberries, cropped for aound three weeks although ripened indoors after picking, they were nice tasting.

How have you done?

PS everything above was grown in pots. (no digging for me)

My strawberries in the raised beds at home did well as did raspberries. The same in the allotment didnt do well at all. Potatoes in the allotment were awful, but i planted some very late in the rased beds back home and they have done well. Birds got all of the broad bean plants and slugs have been rampant, particlarly at home. I wonder about trying some of the nemotode things to see if I can get rid next year. I have also built a hedgehog house to try and encourage a little spiney slug eater to ome and stay!

A couple of pigeon pies should help the birds situation.

Runner's french beans and peas total failure usually give away 2-3 black bags of beans. Corn only produced 2 viable cobs, potatoes could have been better. Tomatoes left too late neighbours have blight so wouldn't have been good. Onions are on the small side. Strawberrys and rasberrys in good supply for dessert, redcurrant and blackcurrant just a few handfulls.Vines are stating to produce a few grapes this year and my little pear tree has some fruit nothing on the little bramley yet.
Not the best year for grow yer own but theres always next year.

garden is 600ft ASL, everything failed this year apart from Raspberries, gooseberries and Black currents. 36 bean plants eithr eaten by slugs of just failed to grow. Beetroot, parsnip rotted in the ground before germination Apple pear, cherry and plum trees had early flowers and set fruit which then just dropped and windward side of the tree died. onions not much bigger than when the sets were put in the ground, basically ground temp never rose and was too wet so disaster, what am I going to drink next year now???????

What? You normally drink something made from onions?
D

Overwintered broad beans and shallots did well. As did the gooseberries. Rasberries/Loganberries did well enough.

Tomatoes were a disaster (blight). Potatoes were moderate (lifted when the blight started, so reduced crop). Beetroot moderate crop - still using them slowly. Parsnips look fine for the autumn/winter.

Best ever onions this year - Balaton, grown from seed in modules. Large onions, high success rate (compared to the number the modules planted out). Will repeat strategy next year. Leeks are looking ok - but I think there is a problem with a boring beetle round here.....

Runner beans are sparse - but still more than we really want. Early peas worked well, but we were too slow to start using them (too many broad beans) so most went into the dried pea stash.

Squashes doing well. The ones for seed (Godiva) are too successful. The normal eating ones ae doing well and promise many tasty roasts theis winter.

Kale (three sorts) looking good for the winter, and the brussels plants look promising too.

So, some good, some bad. Like most years, really.
G

Over here in France it has been a very strange year indeed.

Normally, we have so much fruit we end up giving away more than we keep. We had enough jam from last year to last this. This year everything flowered early but then it rained and rained. The bees stayed at home. No fruit on the trees apart from a few late flowering apples.

On the other hand, the toms were astounding. The cherry toms had fantastic flavour and the cookers were never ending. Enough cooked and jars for all of next years CCC and pasta sauces. So many dried beans we have run out of storage jars. (my fingers ache from the shelling) Peas by the bucket load.

So all in all, a mixed year. I really miss the raspberries and cherries but we had a few pounds for plum jam and thats it.

Lets hope the bees get out next year.
F

Had a good crop of runners and courgettes. Loads of tomatoes with zero blight! Potatoes were a poor return really. Birds ate all the gooseberries, our pear tree that normally yields bucket loads of fruit has not had a single pear on it this year, neither has our plum tree and the two apple trees had a poor return as well.
W

Runner beans are absolute rubbish this year. They were started in pots in the greenhouse and planted out at the right time. They shot up the sticks with loads of flowers and then the weather changed and they failed to set. I had my first decent picking last Sunday.
Similarly, my apple trees were covered with flowers but cold weather meant they weren't pollinated and this year's crop is about a 10th of last year's.
As for my onions, they grew OK but are suffering from downy mildew so probably won't keep for very long.

whiskywill":yynooqia said:
As for my onions, they grew OK but are suffering from downy mildew .....
Click to expand...

You can probably get some ointment for that :wink:

Runner beans - only planted four sticks worth this year as we're only just finishing last years! and apart from some tiny spuds, a few peas and one carrot they're the only thing that did well this year!
I've tried my best when chucking the dogs ball and frisbee, even encouraged the chooks in for snack when the missus wasnt looking, but its no good , i just cant kill 'em :evil: persistent little devils!

and guess what? beans for tea
D

Final garden crop of the year. Cold weather forecast for last evening so we stripped the garden.

Apple cucumbers (the white ones) also to pickle.

So the tomato crop was a complete disaster, three red toms earlier and these are the remainder. 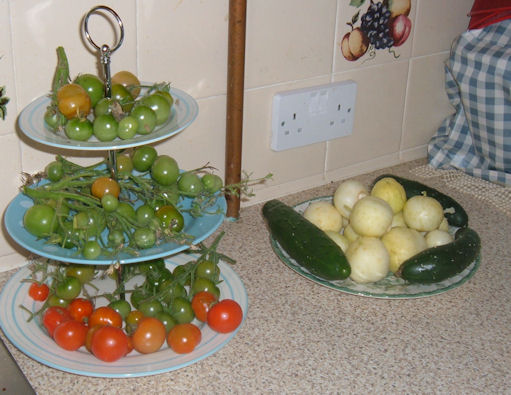 40 pots so far of Blackberry jam and only one of Plum Lime and Ginger (is a big one)
Got lots of Blackberrys in the frezer and need to pick some more.
My cooking apple tree is loaded with apples.

Swings and round-abouts kind of summer.