MDF is the friend we love to hate. It's horrible to use, but it is stable, readily available and affordable, and it saves hours of time gluing boards together to make a wide panel.

I'm making a wardrobe at the moment, and the carcase is made of oak-flavoured MDF. The veneer is OK (B/BB), but of course, the edges are as ugly as sin.

In industry, a thin veneer of oak would be applied with an edgebander. The veneer comes in rolls, it is self-adhesive and the edgebander applies just enough heat to melt the glue and press it into place. The excess is then trimmed off with blade designed for the job.

I don't have an edgebander, and I want my lippings to be a bit more robust than just a layer of veneer, so I've made a run of lippings that are 2mm plus a 3mm tongue, to fit into a 1/4” groove. This should be a much better job (I certainly hope so as it was a lot of work).

I have the same problem of trimming it though, and although I could use a block plane, there is always the risk of tearout if the grain changes direction, or of nicking the veneer if I get too carried away.

This little jig is the answer.

There are a number of small routers on the market. Generally known as trimmers, they can be held in one hand, they are inexpensive, and I now have three, which means I can afford to set one up for a job and leave it for the whole project.

This trimmer base replaces the plastic base that comes with the router. This one had a weird thread size and I needed longer screws, so I re-tapped the holes at M4.

The base is in two parts. A rectangular piece of 12mm MDF is attached to the router and a 6mm piece with a 90 degree point on it is screwed to that. There is some plastic laminate glued to it to provide a low-friction surface. 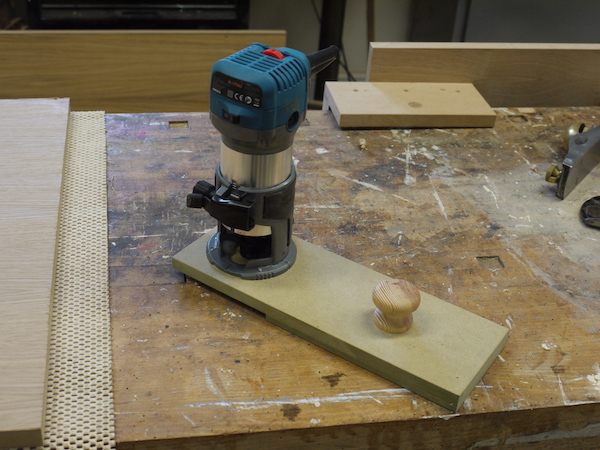 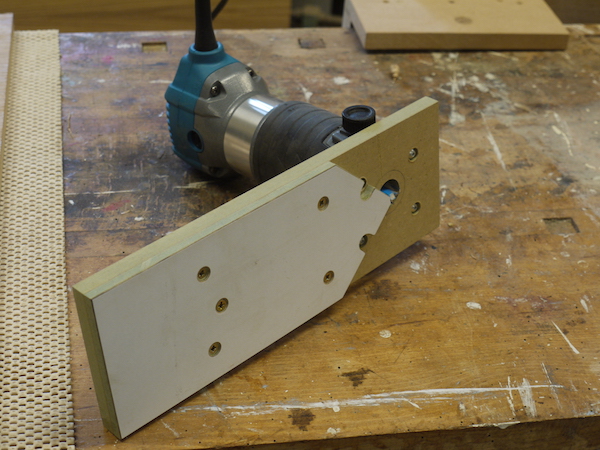 It sounds simple, and it is, but that doesn't mean that there is nothing that can go wrong! I needed two attempts...

The first thing to ensure is that the point is somewhere under the cutter itself. That is easy to arrange, just put the original plastic base onto your rectangular base and mark out the fixing holes from that.

However, it may well matter which way round you orientate the base. My first attempt had the cable of my router coming out over my hand and it was very awkward, as the switch was right round the far side. I couldn't just unbolt the router and turn it through 90 degrees, as the hole layout is not symmetrical, so I had to make a second one. Much better. 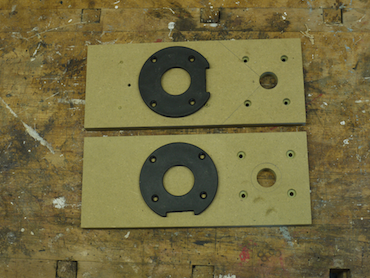 I also had to cut away a bit of the laminate base so that I had access to the screw-holes for the router.

If you make this, I suggest that you drill the holes from the underside. That way you can drill a 10mm hole for the counterbore (big enough to take a washer) and still have material on which to centre the 5mm drill for the through-holes. And by using round-head machine screws, you will now have a bit of wriggle-room for lining them up so that you don't strain the casting of the router base.

To set it up, mount a 1/2” bit with good bottom cut into the body of the router. Fold a piece of A4 into three and put it onto a hard, flat surface, such as your tablesaw. Put the trimming base up against the paper, but not over it, and lower the cutter until it is touching the paper. Lock it off. The base should be in contact with the table; the bit, and only the bit, should be over the paper. The bit is now a few thou above the surface. 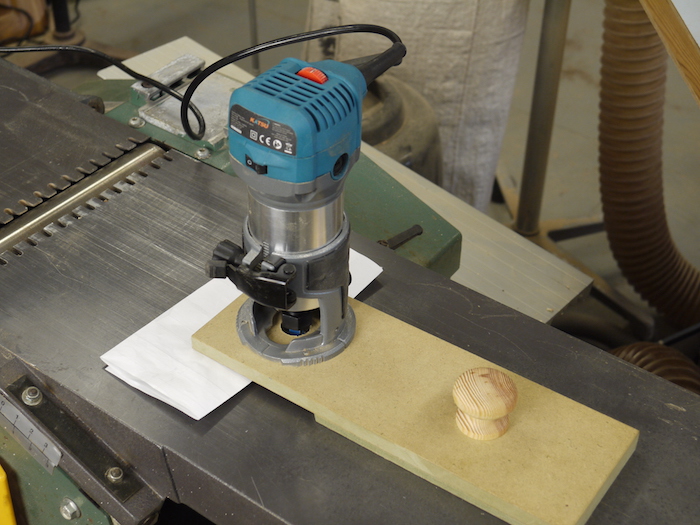 Test it by dragging the router sideways over a secondary face of the board. If you see a scratch you are too low, so have another go.

In use, the point of the base, or one of its diagonal sides, runs against the raised lipping and the cutter removes the excess flush with the surface of the veneer. A quick sand completes the job. 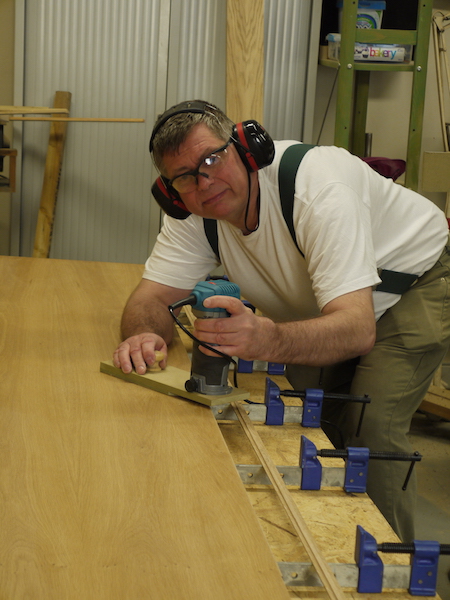 I've now got a 2mm lipping which I can chamfer, either with a 45 degree router bit, or, as I prefer, a few passes with a quiet block plane. The result is a very neat, robust, board edge. 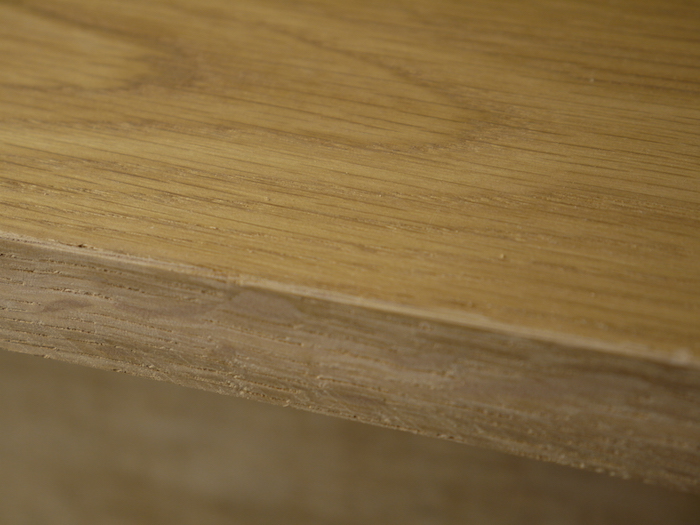 I take no credit whatsoever for this, I suspect it's been around for as long as routers have, all I'm doing here is documenting my build of it.