It all started when we decided of limiting part of our garden for avoiding access to Johnny.
Who is Johnny? Our incomparable Beagle!

So I thought of installing a wooden fence, 175 cm long, very simple: two side pieces with a central gate.

The project is quite simple but I showed its realization for a particular reason: the build was done without nails, screws or glue.
For me is a new way of working wood. I must say I was satisfied of result: the fence is rock solid and time will tell me if the technical solutions were right.
Stiles and rails are jointed by mortice and tenon and reinforced by pins inserted through the joints; staves fit rails by a dovetail joint.
For building the fence I used pallet wood (silver fir) without eliminate defects as nail holes, deep scratches or dead knots, all covered by a coulored paint.

Realization of mortices on the stiles.

After preparing pieces by band saw and hand planes I realized the mortices on the stiles and the housings for insert staves on the rails.

Trace on both the head of staves the wished angle.

The first step was to create the right angle on both edges of staves, with a 1:6 ratio (9,5° circa), as generally prescribed for dovetail joints on soft woods.

The pencil marks drive for a correct bevel.

With angles traced on both stave heads, I utilized a jack plane for crating the bevel on both edges.
The next step was to excavate the recesses on rails, realized with saw, chisel and router plane.

Cut just to the inner side of waste by a dozuki saw.

The router plane levels the bottom of stave recess.

At this point I created a double bevel on the top of rails, so the rain can slide easily.

The top edge of rails is bevelled in order to avoid the stagnation of rain water.

Then realize the tenons, cut slightly wider of final dimensions. A rabbet block plane (Sargent 507) is used for the job.

The block rebate plane is useful for giving the right dimensions to tenons.

Because the work is glue free I preferred making tight joints, so that they was held by some mallet shot. The same was for stave insertion, apart the gate joints , held with drawbored pins.
The holes are flared on top from both parts by a screwdriver of proper size. Pins, properly cut to the extremities, are held from both sides by wedges.

The tip shape of a screwdriver helps to flare the hole extremities.

Pins show one or two cuts to the extremities for wedge insertion.

When inserted, the pin is held by wedges on both sides.

As said, rail tenons are fixed in their mortices by slightly unmatched holes. Drawboring was applied to fixed part of door lock, placed on one of the stiles: in this case a double mortice was made on the stile and the stop and two floating tenons are drawbored in both pieces.
I haven’t pics of this step, but I drew a sketch for illustrate the concept:

Drawboring is used to fix the lock stop to the stile.

The fence is assembled in the shop before finishing.


Finish was two coats of cementite and two of acrylic paint

How high can a Beagle jump? 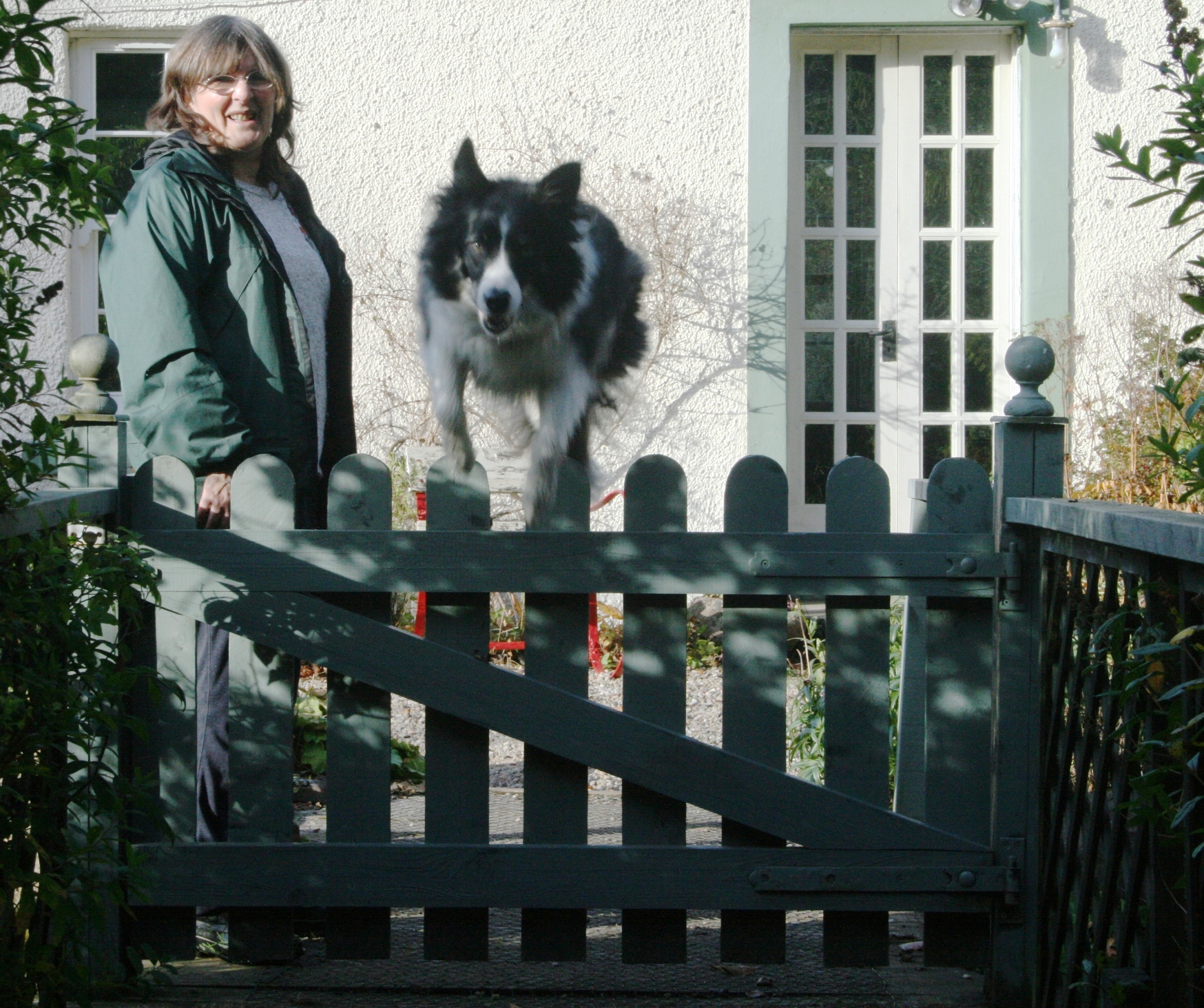 Not as high as a Collie I hope.

I love the idea of using proper joints instead of metal fixings. Does anyone know if this was ever a common technique for fencing?

Not as high as a Collie I hope.

Nice pic Bod. Johnny is a agil dog but not so tall for jumping that fence.

None of the pictures open for me including your avatar. There may be others in the same boat. If they are linked to off site hosting rather than the pictures loaded to the site that might be the problem.

Inspector":9114vili said:
None of the pictures open for me including your avatar. There may be others in the same boat. If they are linked to off site hosting rather than the pictures loaded to the site that might be the problem.

I can see them.

Inspector":2v7uc3i9 said:
None of the pictures open for me including your avatar. There may be others in the same boat. If they are linked to off site hosting rather than the pictures loaded to the site that might be the problem.

Same here. Looking at the site where they were all hosted, tinypic.com, I found this message:

TinyPic is shutting down in 2019
TinyPic is shutting down its image hosting service because we can no longer support a free service that derives 100% of its revenue from ever declining on-site ad revenues.
While you may continue to host images from our site until further notice, we encourage you to consider selecting one of the premium plans offered by our sister site, Photobucket.
Thanks for using TinyPic for your hosting needs over the years. We apologize that we can no longer continue providing this service, but Photobucket is a great option going forward.
Close message

So another free hosting service disappears.

If you want your pictures to be seen, choose another host, pay for your own, or upload them to the forum.

Enjoyed that read, thanks Giuliano for taking the time to post.

Thanks for fixing the pictures - a great project which looks like it was a lot of fun to build!

AndyT":11o3ymd7 said:
Thanks for fixing the pictures - a great project which looks like it was a lot of fun to build!
Click to expand...

Thanks both.
Andy, I have not done anything with pictures. I always could see them. May be a temporary technical problem?

Now I can see the them. Great work.