I thought I might as well document a couple of projects, so lets kick off with a desk build.

I picked up a full length stave beech worktop from my local timber merchants a couple of months ago with the intention of using it as a desk top. I'd been umm-ing and ahh-ing about how to make the legs or whether to just get some welded box section jobbies from ebay. Having rewatched a few Ishitani videos I fancied having a go at making something along the lines of his Walnut Trestle/Kigumi style base [without a fraction of his talent or accuracy (link to videos below)]


Decided against going for the full sliding dovetail substructure shown in the video, but really wanted to try having a go at the bridle(?) joint connecting the horizontal and upright pieces. I had a big old chunk of sapele/utile about 40mm thick, 400mm wide and 1.8m long. I'd planned to make some guitar bodies from it, but reallised that was probably not going to happen, so it was the first thing to get hacked up (leaving enough to sit waiting, unrequited, to become a couple of riff sticks). 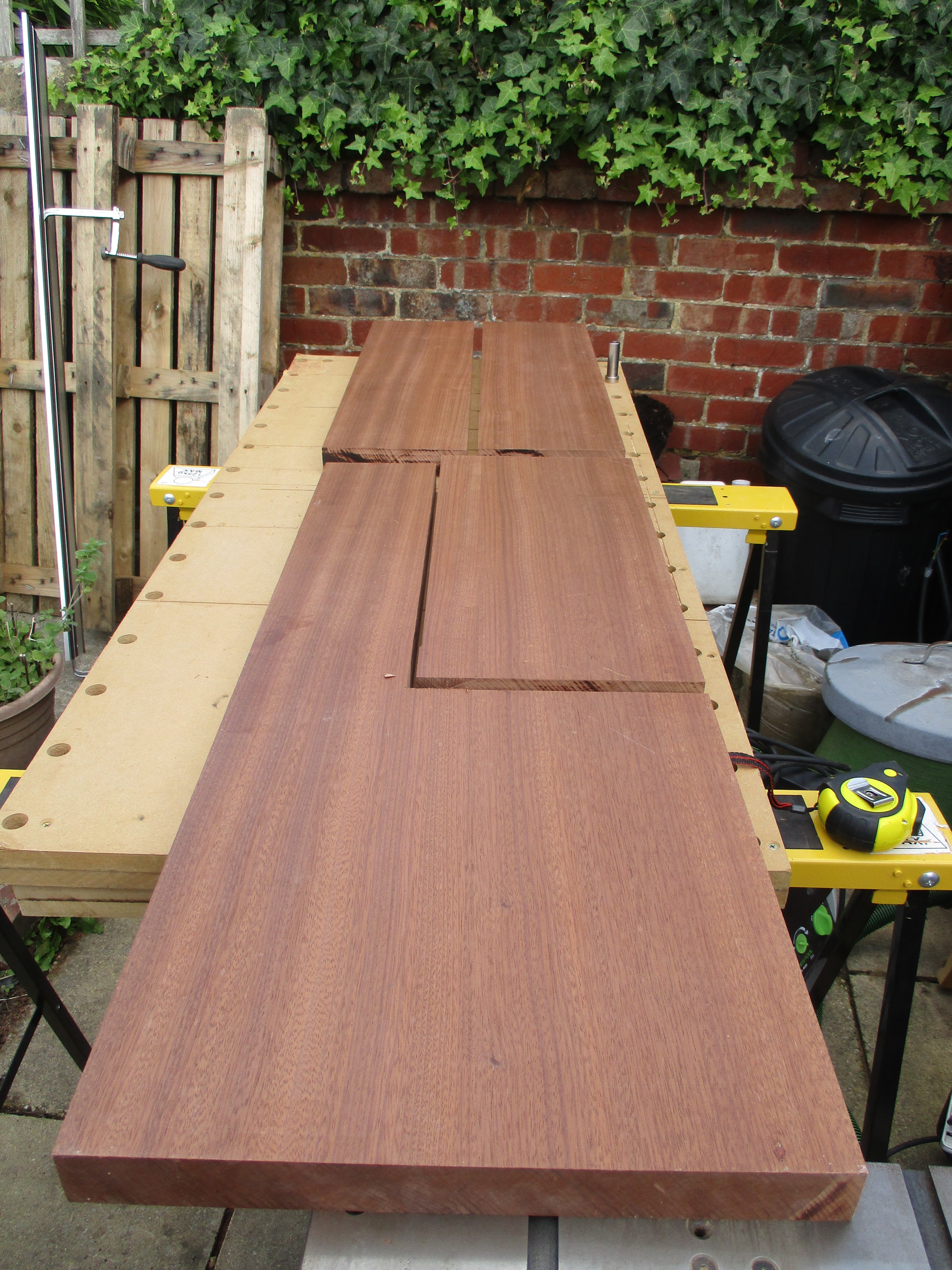 Yes, I need to buy all new blades for my various saws. 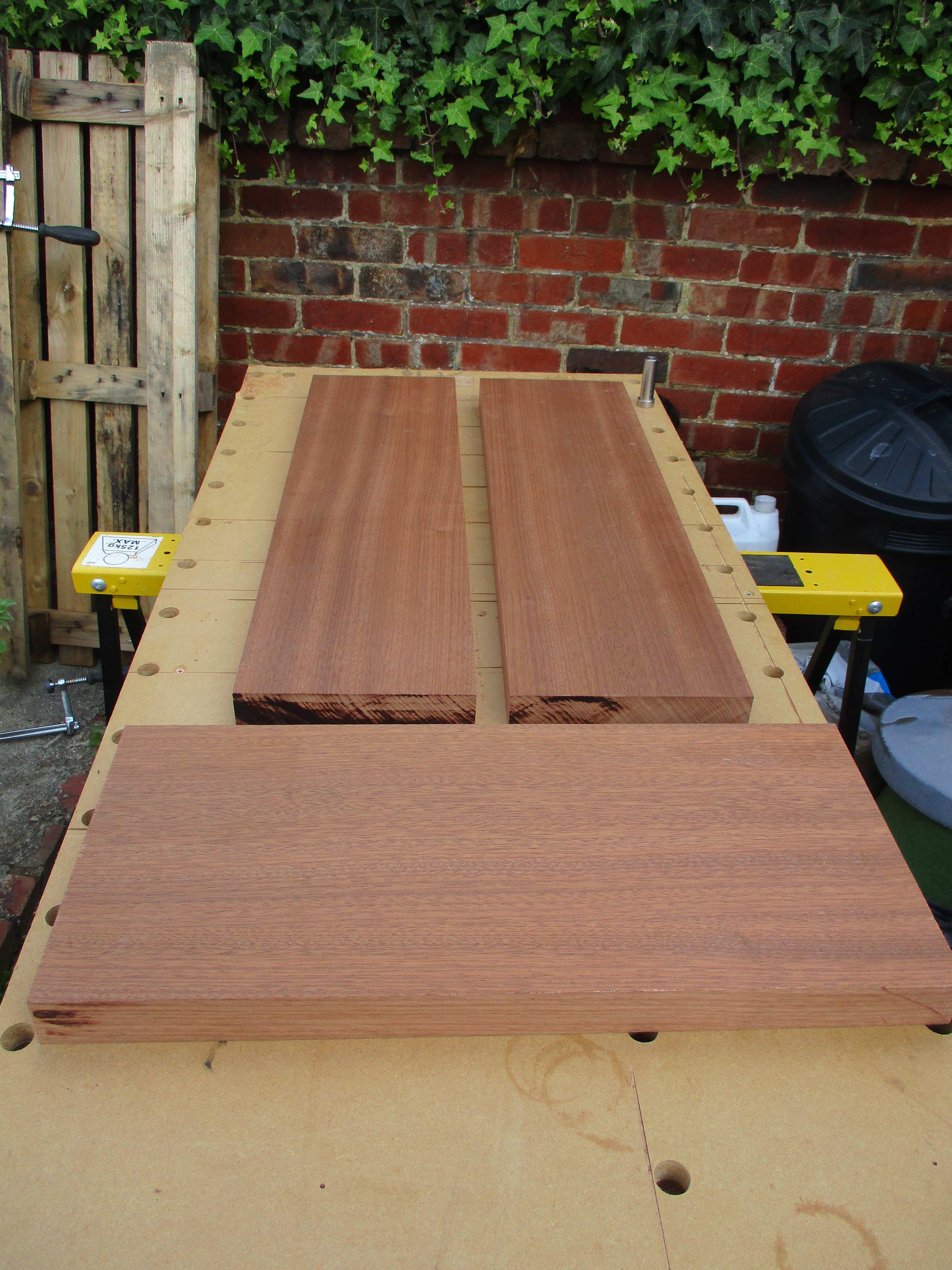 The two pieces at the top will be the uprights, I'll use my table saw to rip the larger piece into four equal width strips. 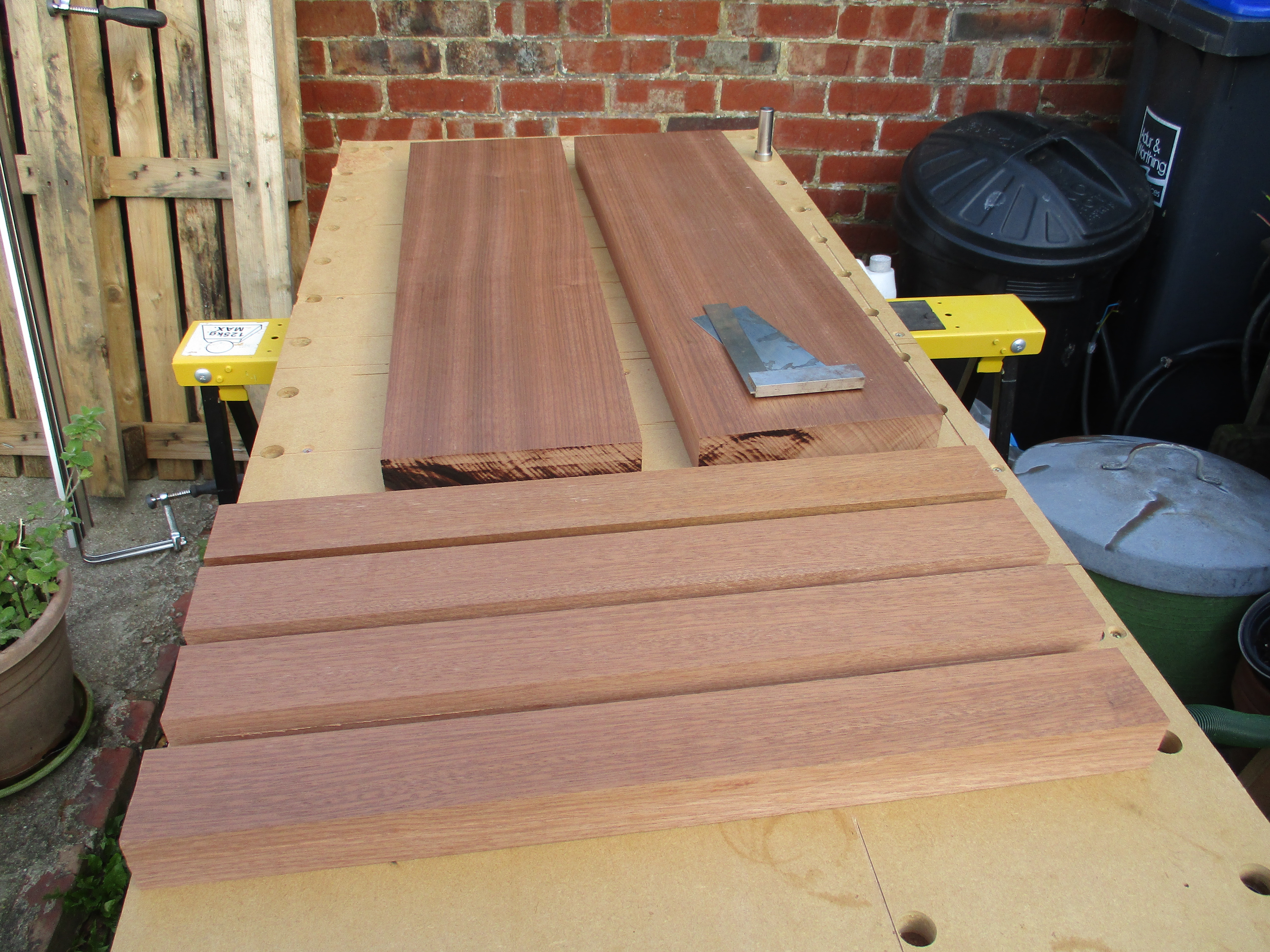 I wanted the upright to be off centre. Eyeballing it, I settled on something like this 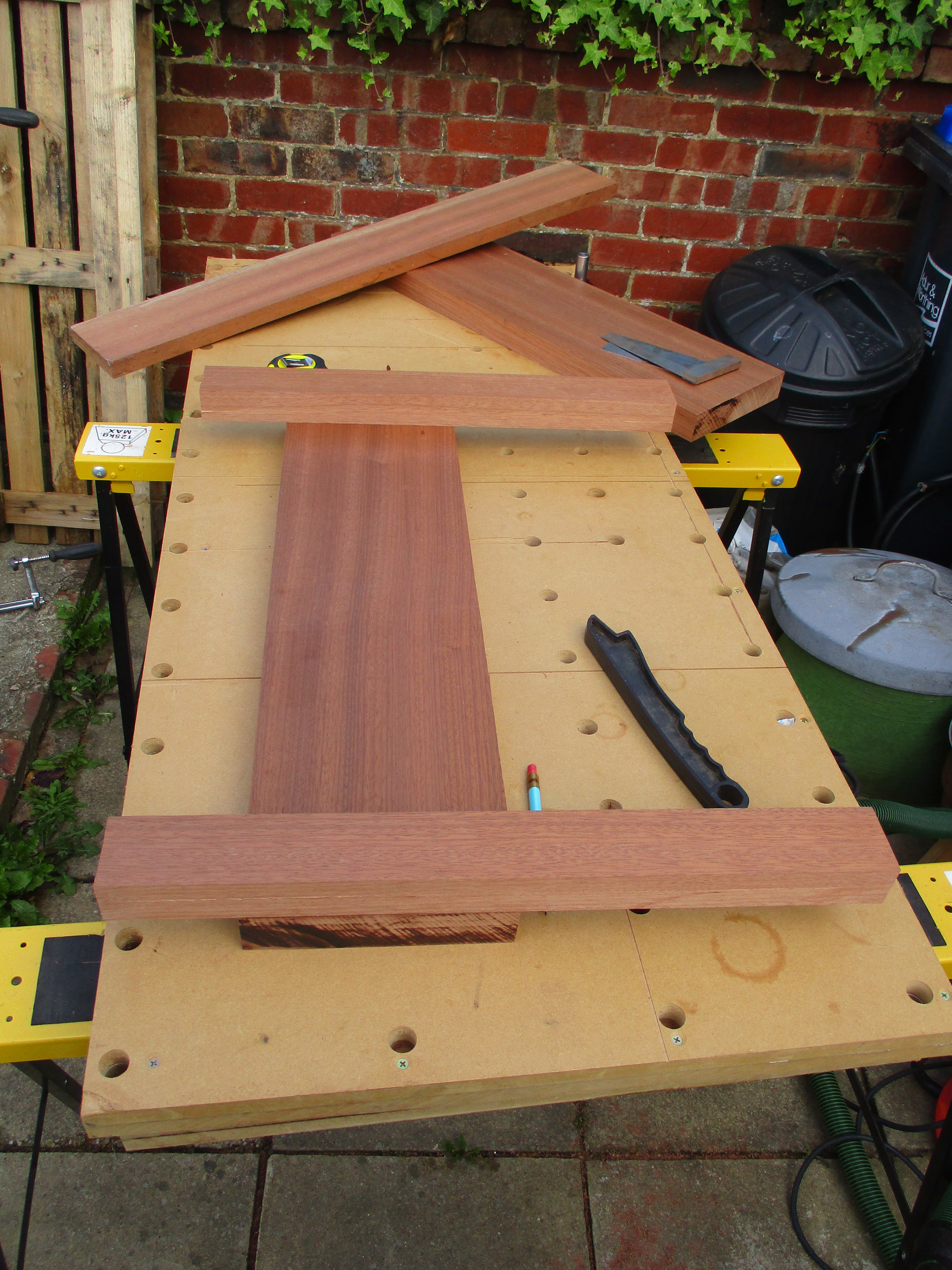 Next I set up the table saw (a trusty litlle Axi TS200) with a tall fence to cut the slots for the bridle joints, along with a couple of feather boards so I could keep my digits away from the sharp spinny thing. 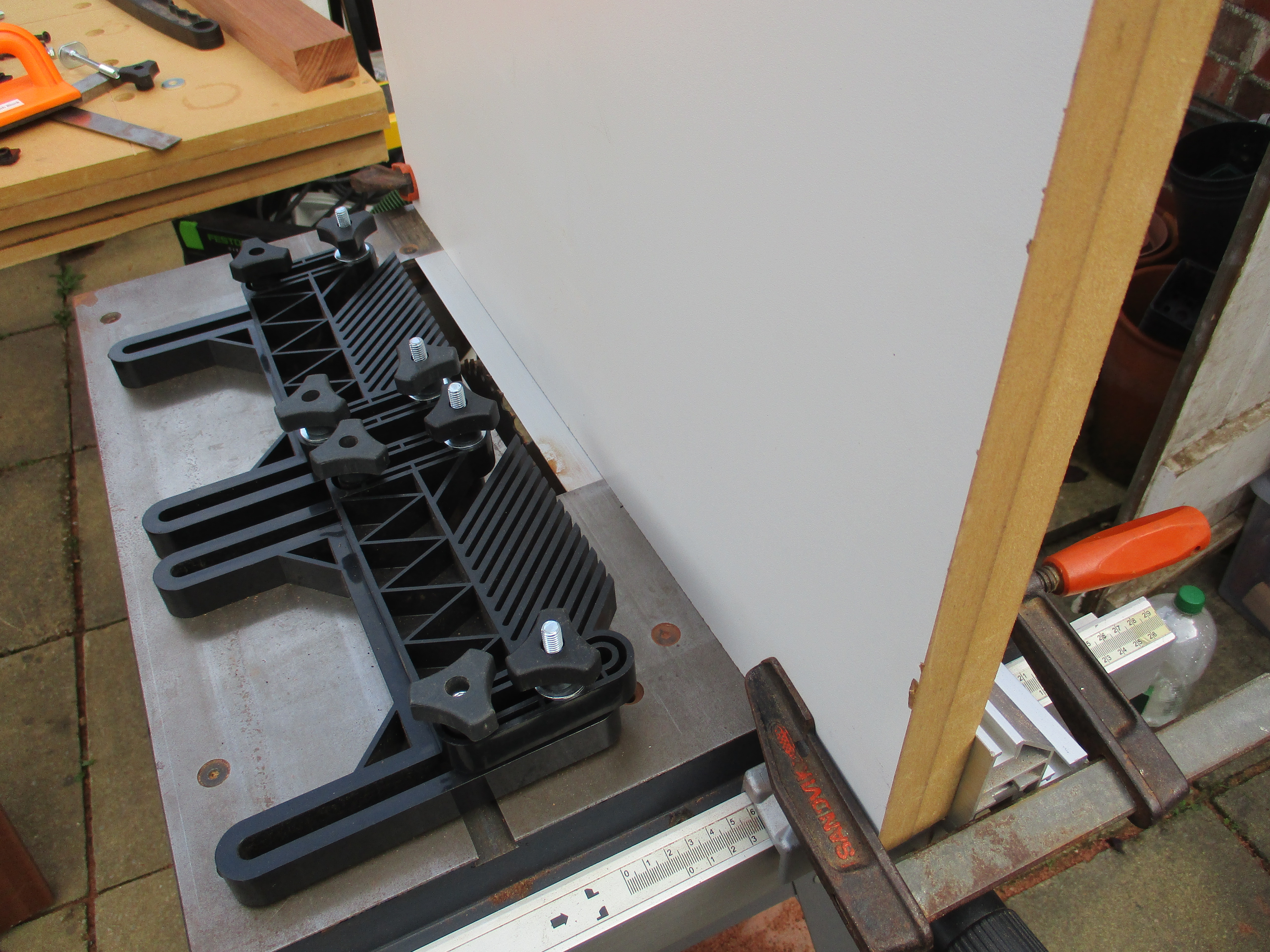 Taking things slowly, gradually raising the blade until I had a couple of slots about 42mm deep. Grabbed a chisel and started paring away the waste 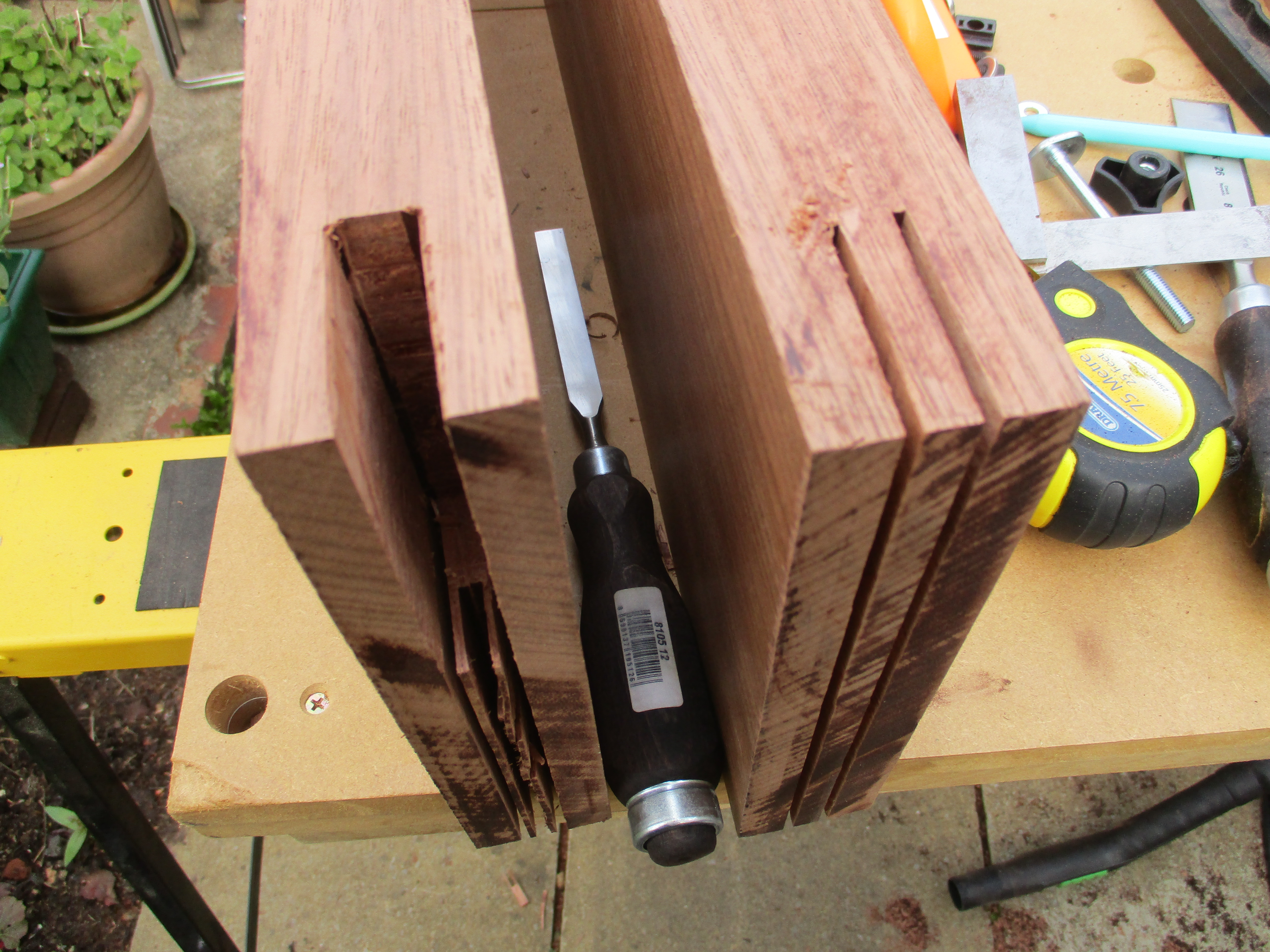 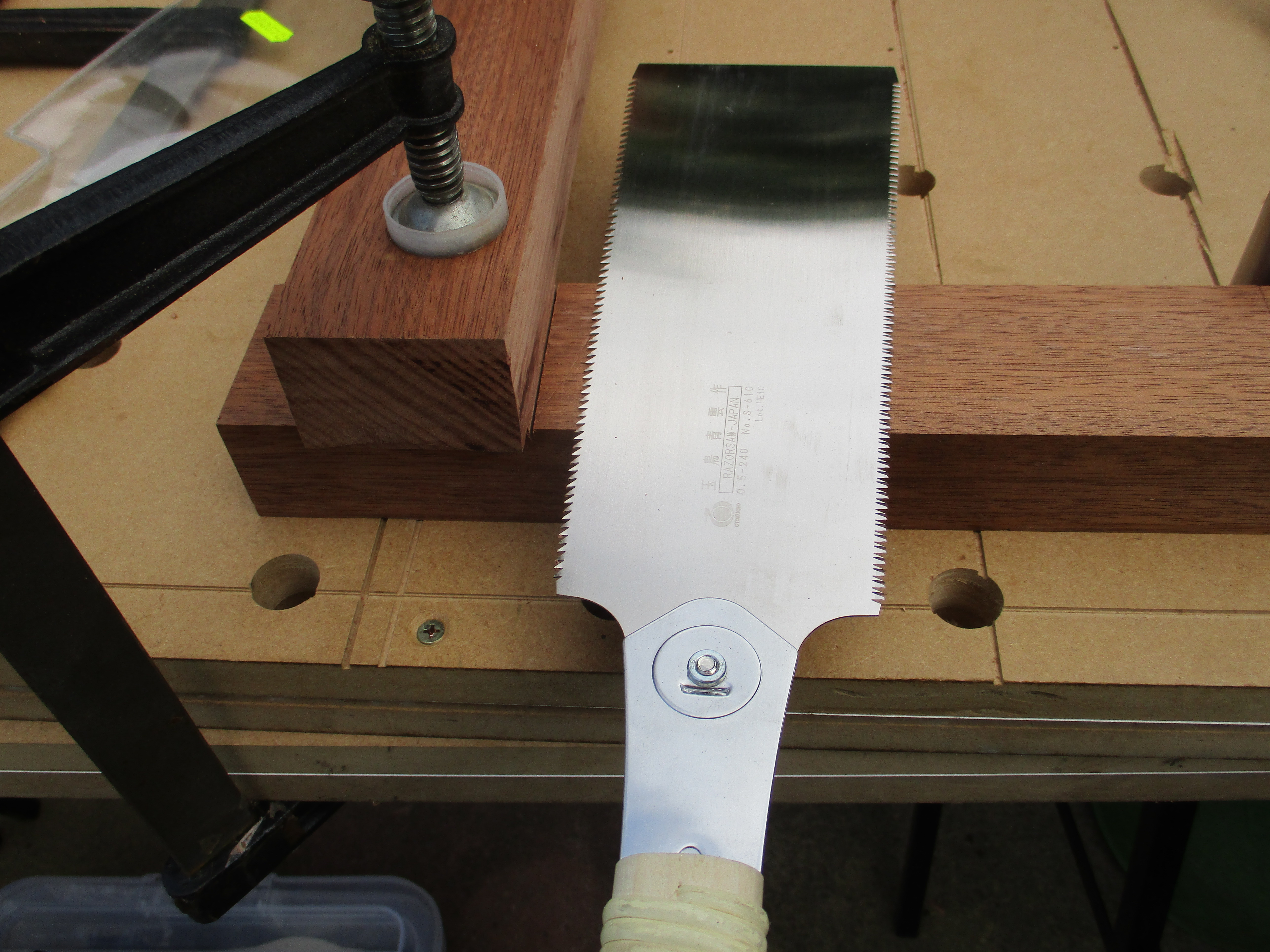 Then cleared the waste using the table saw until we had something looking a bit like this: 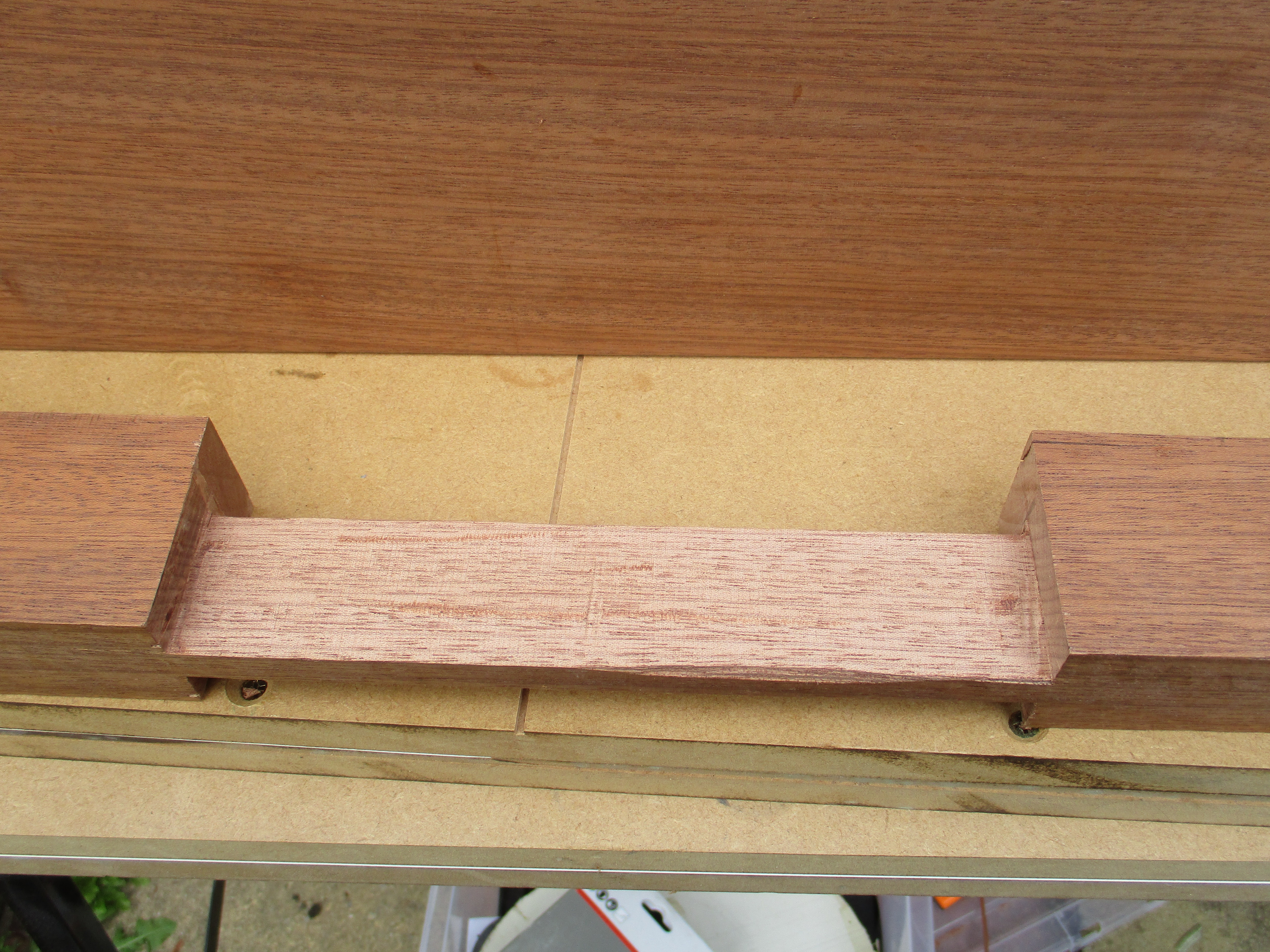 First fit. Not too terrible for a first go. Will need a bit of filling later on. 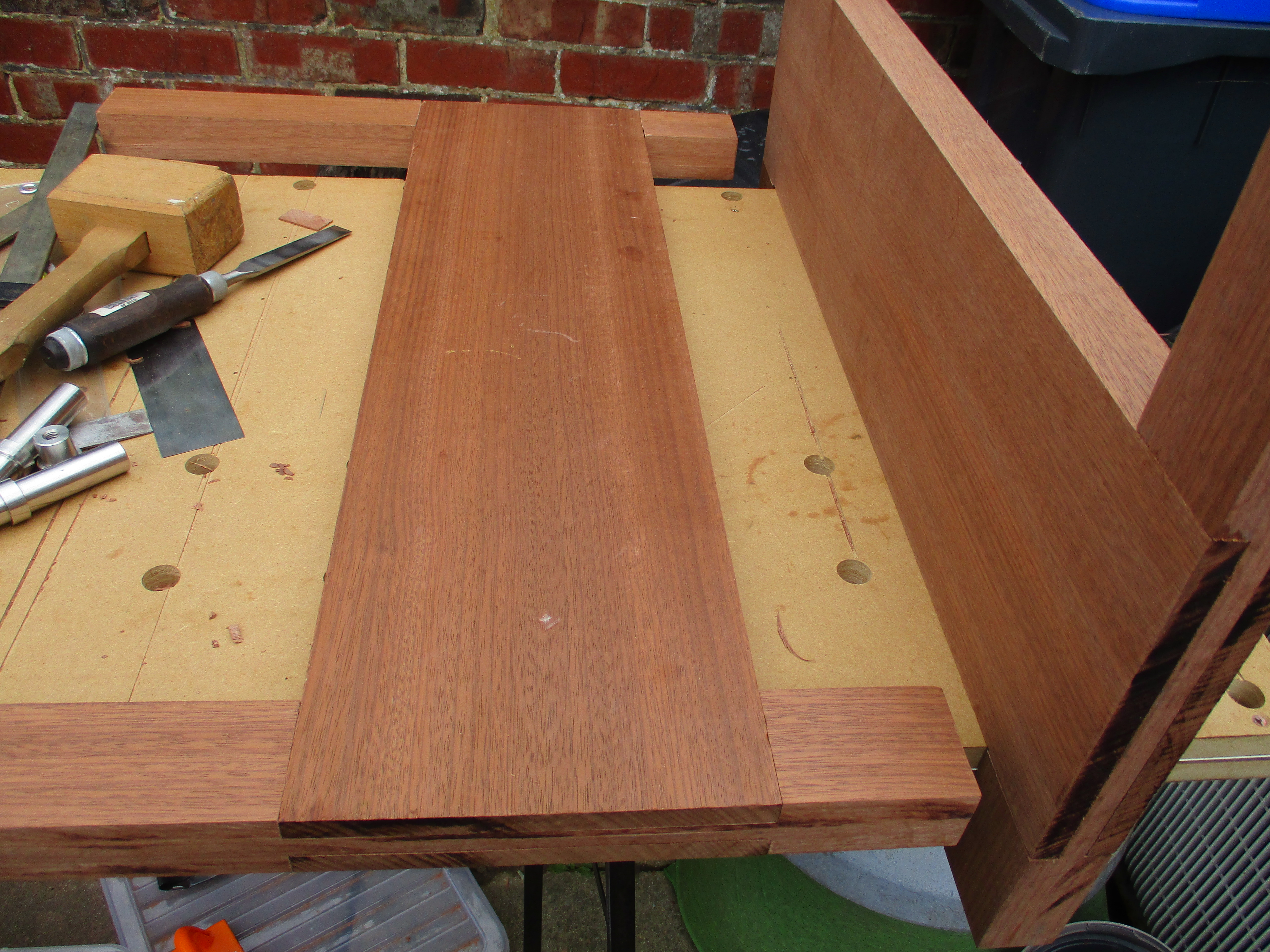 Next job was to put tapers on the horizontal pieces. I couldn't come up with a sensible way of setting up the table saw, so Heath-Robinsoned a way of making a repeatable cut using the track saw, bench dogs and clamps 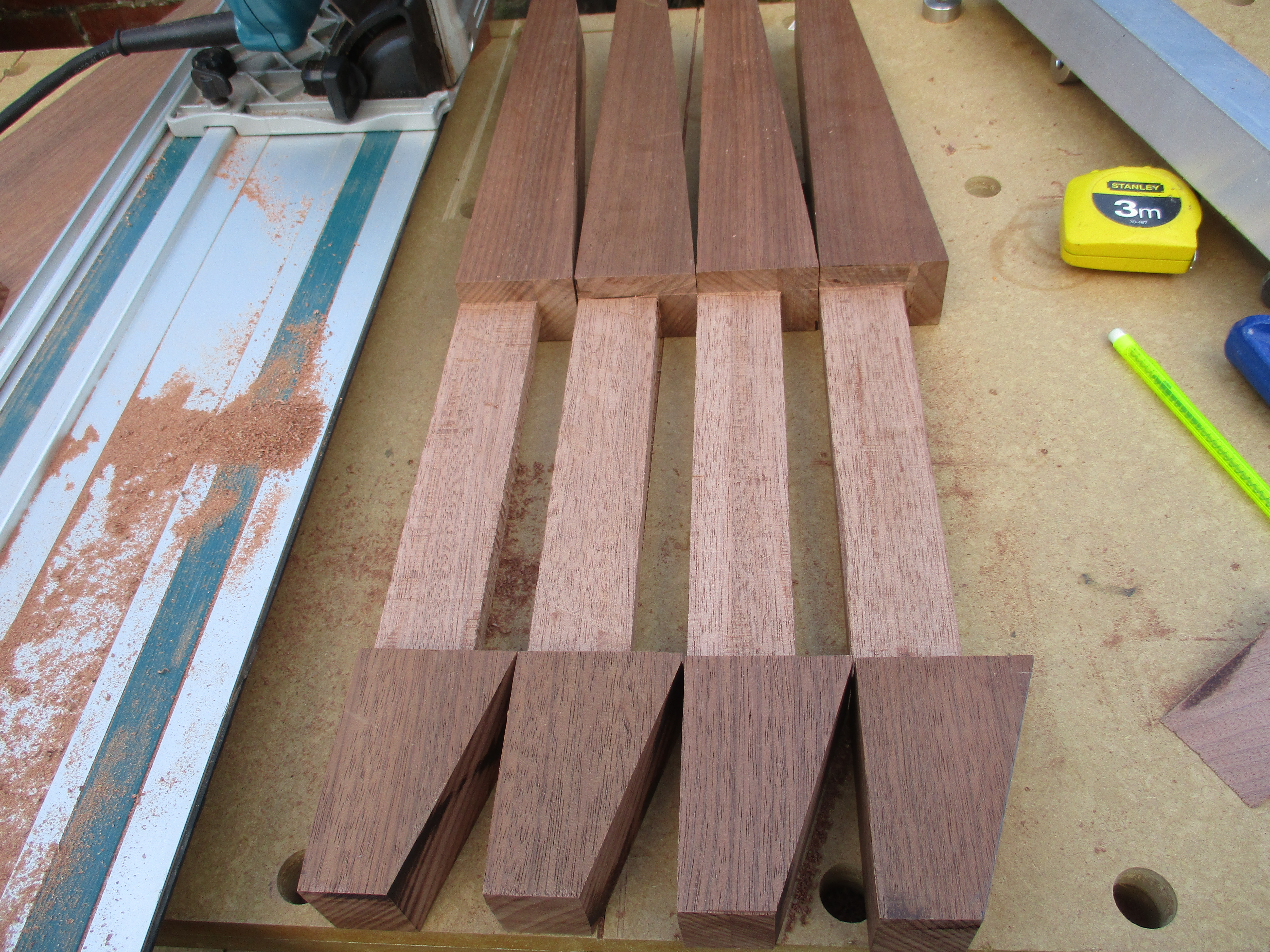 The legs were glued up overnight.

I also used the offcuts from the long tapers to make an inclined surface for carving lino for relief printing. Quick and dirty project which would have lead to much head-scratching 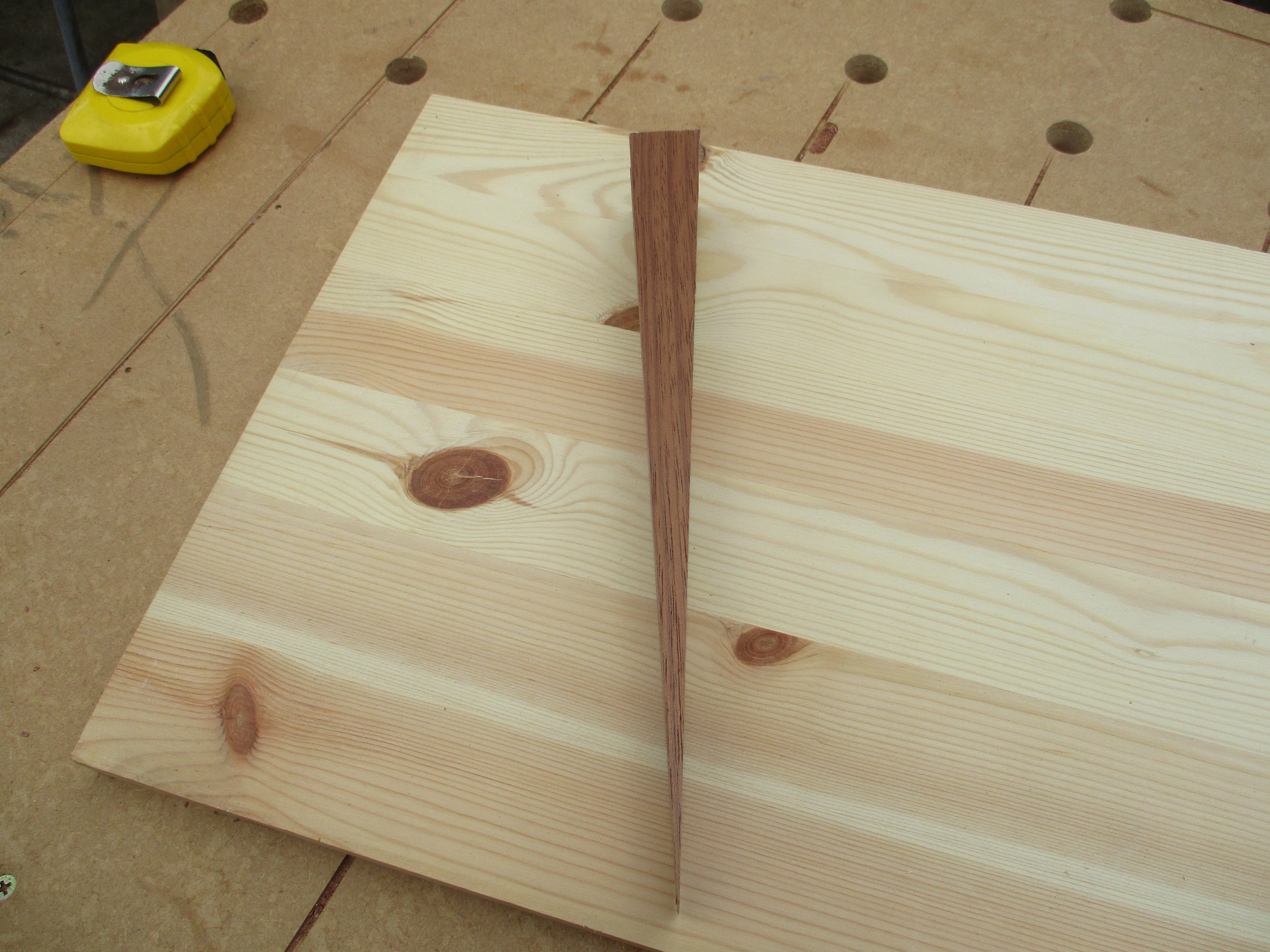 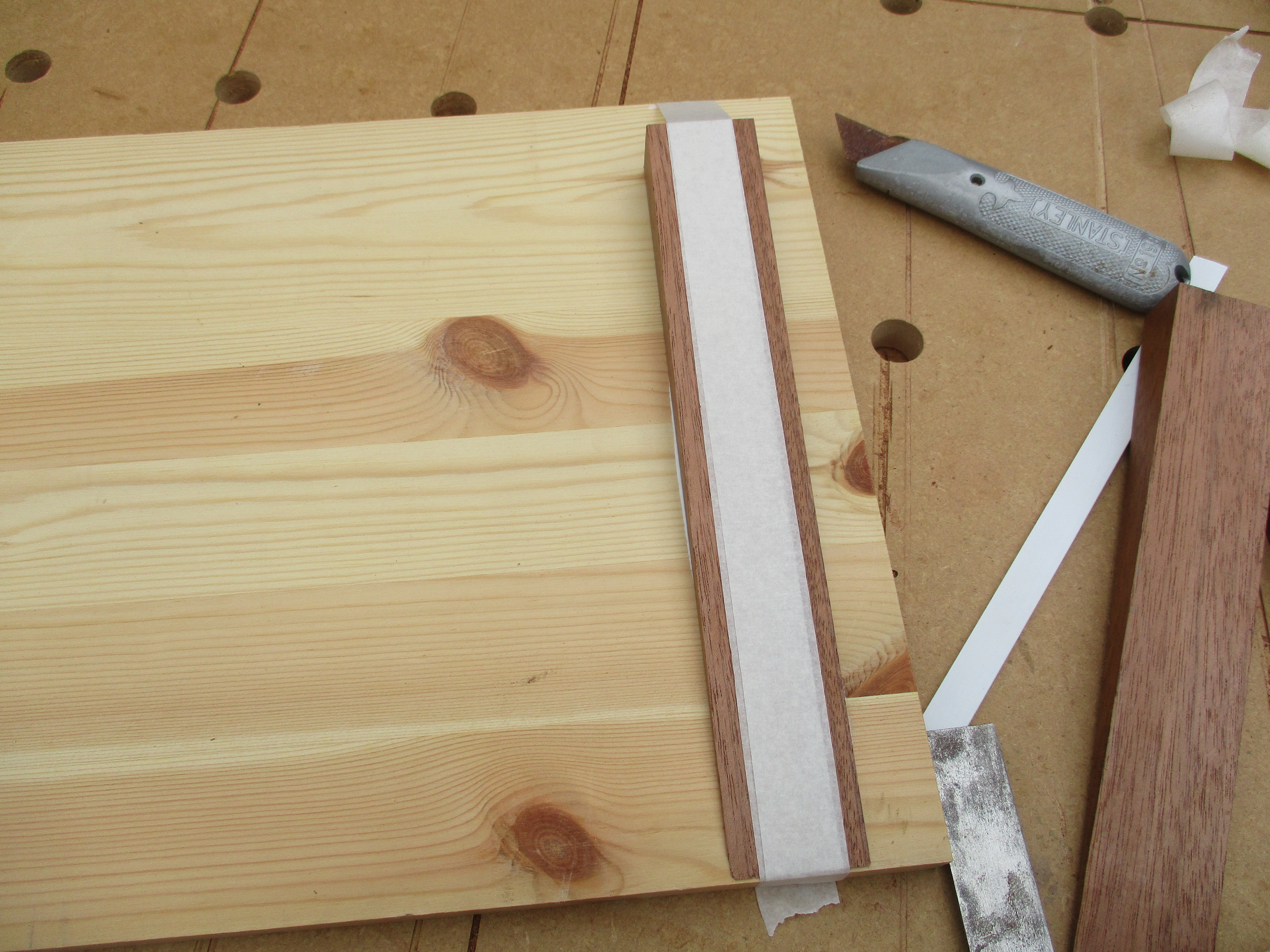 Next stage was to sort out the stretcher. I cut a 1.2m length from a 24x280mm plank of utile/sapele and worked out the positioning. Because I'm going to use an articulated keyboard tray which goes a long way back under the top surface, I would need to allow some clearance (handy for cabling as well). With that duly considered, I marked out the positions for some Dominoes.

One of the motivating factors behind this project (apart from needing a desk, obvs) was to try Festool's Domino Connector package for the DF500. I have a couple of other projects where these could come in useful, so wanted to see how accurate and strong they were.

On each end I marked out the positions for two regular 8x50 Dominoes as guides, and three locking connectors. 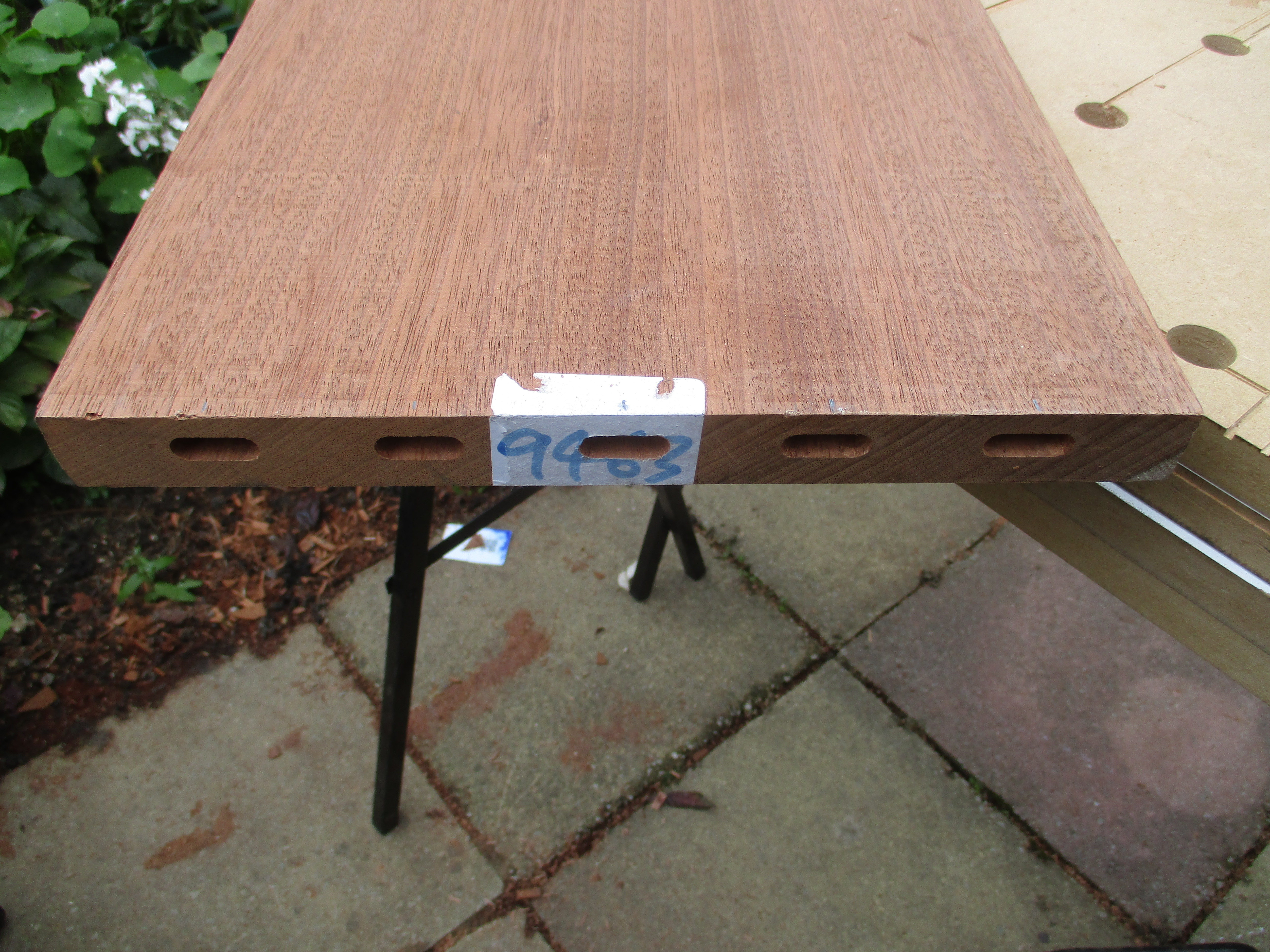 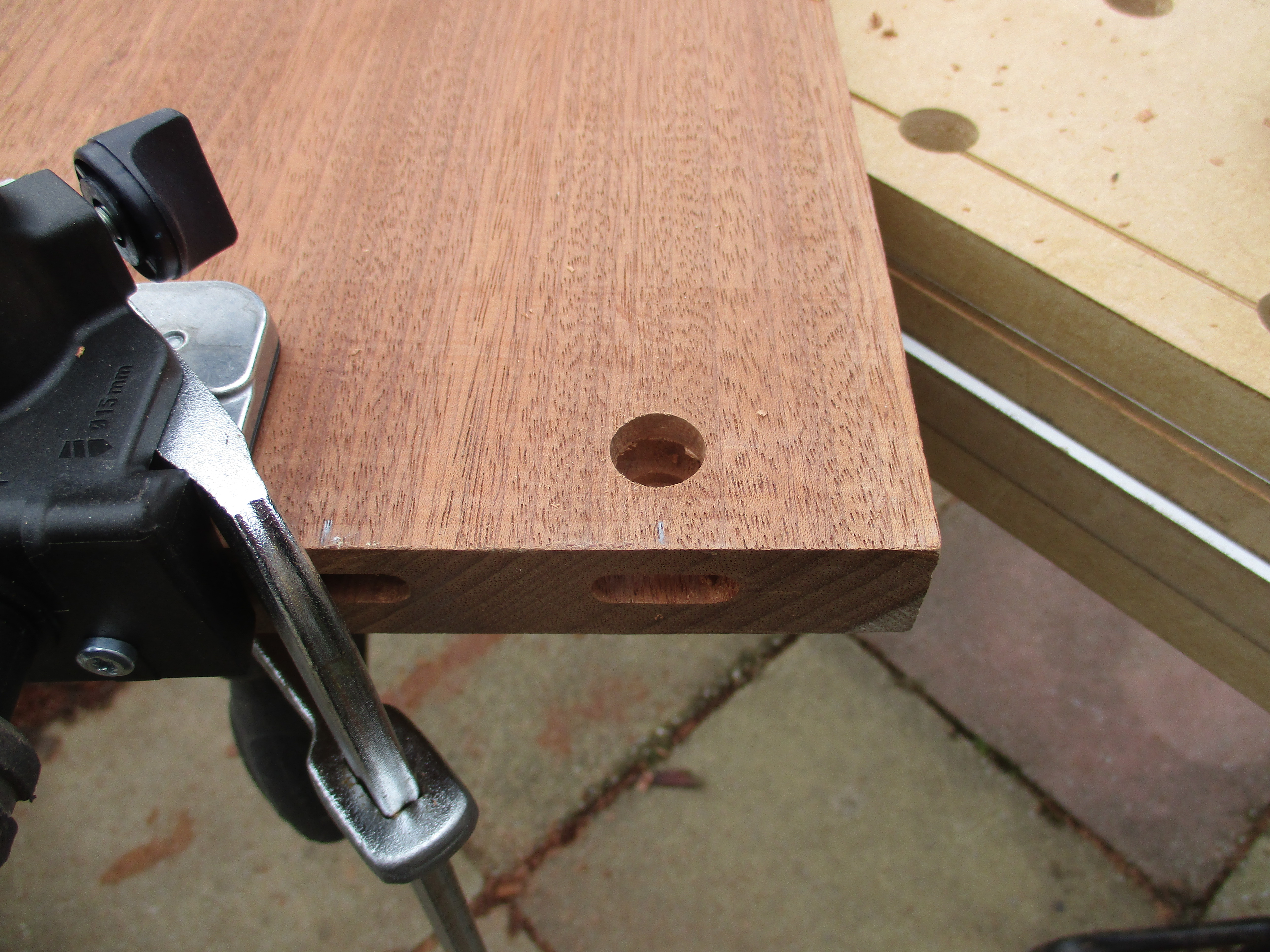 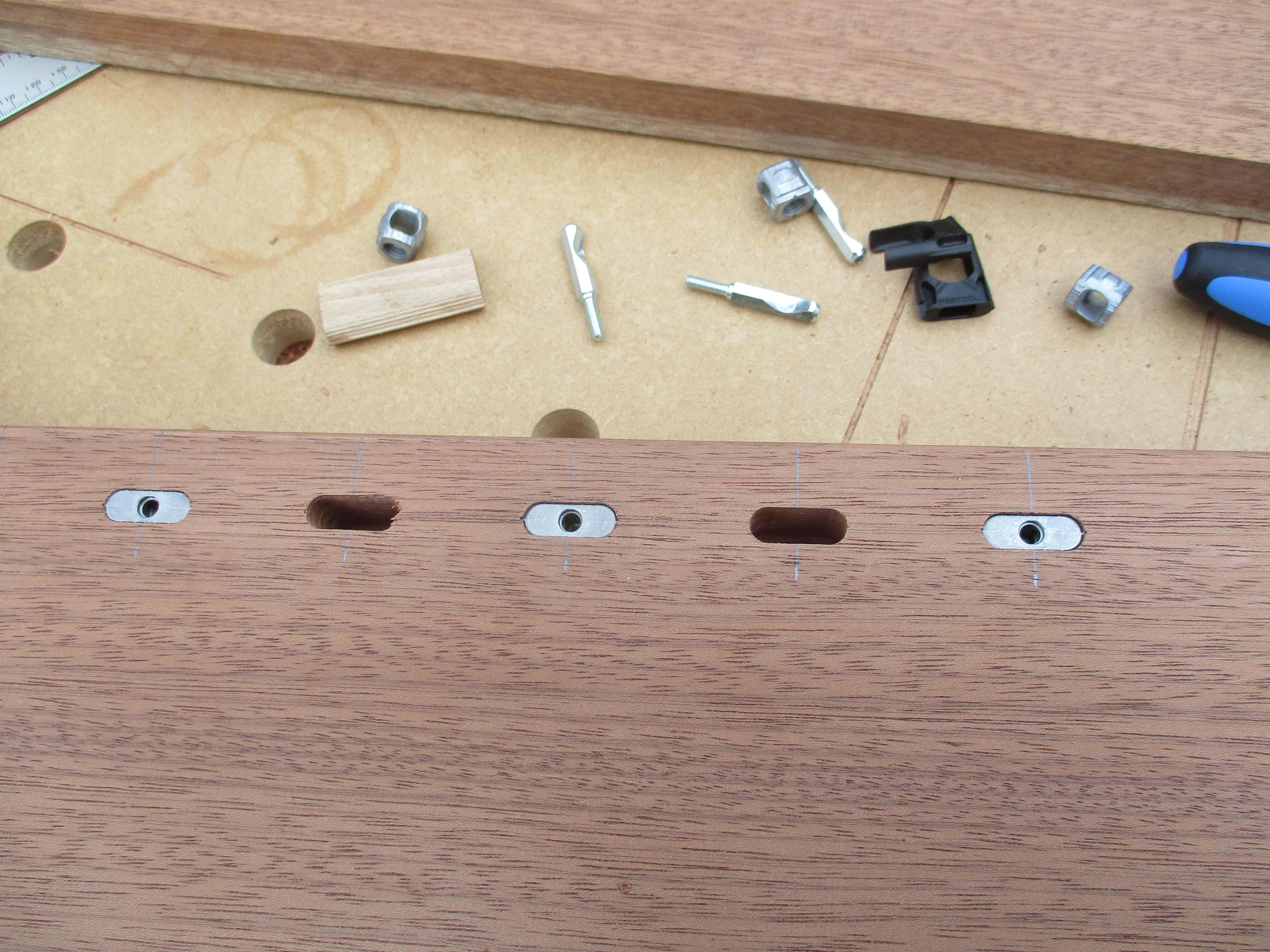 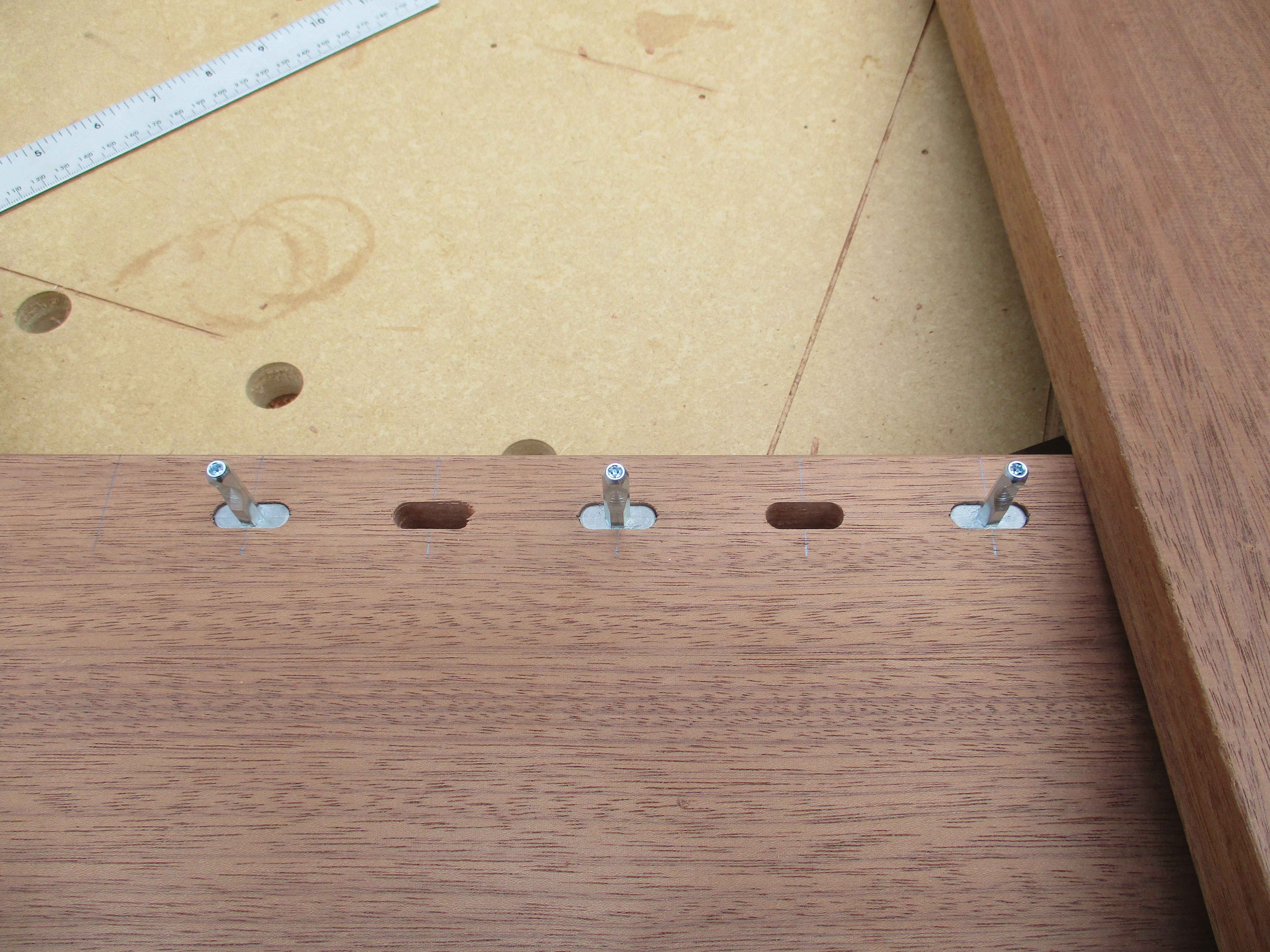 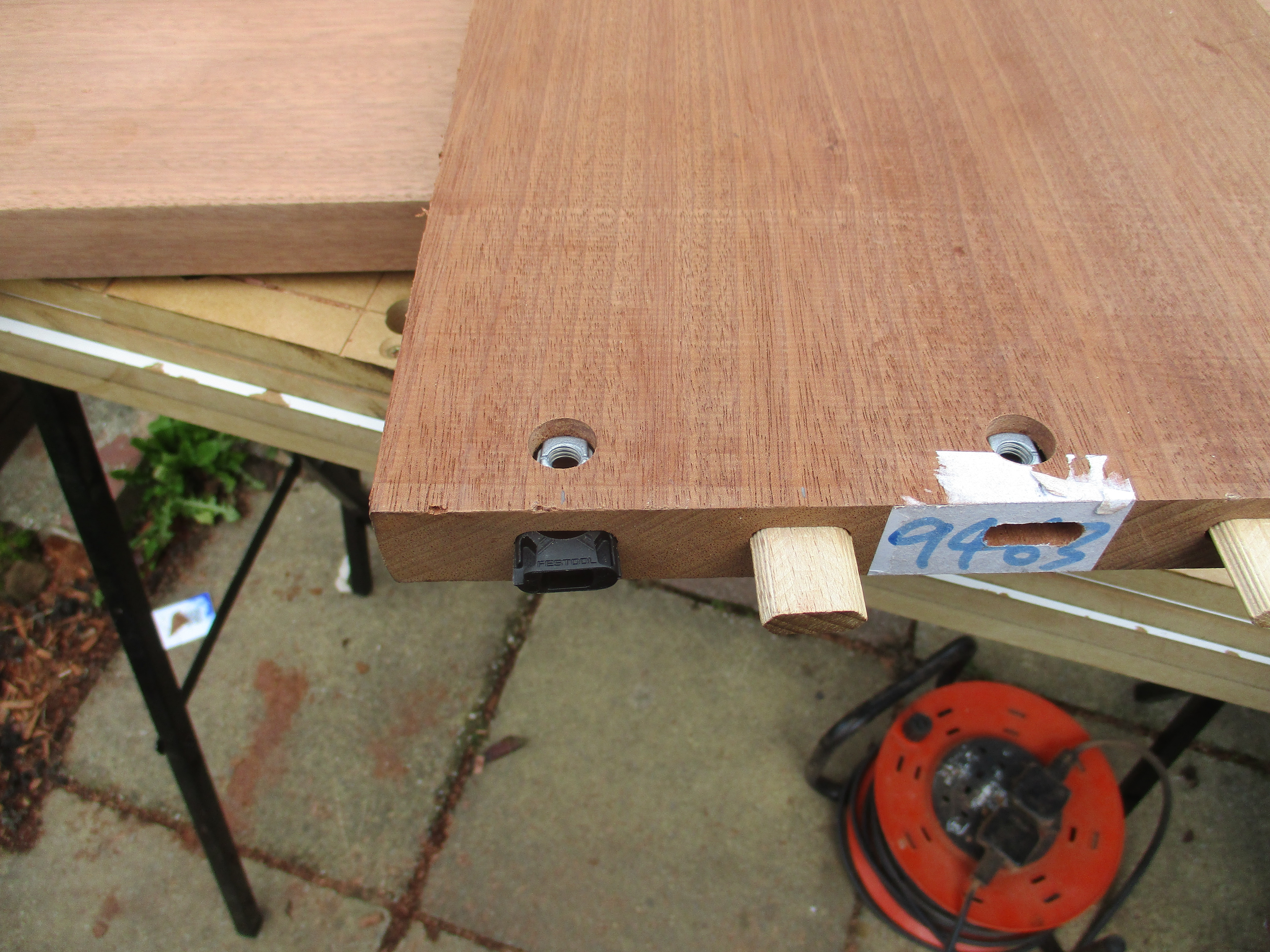 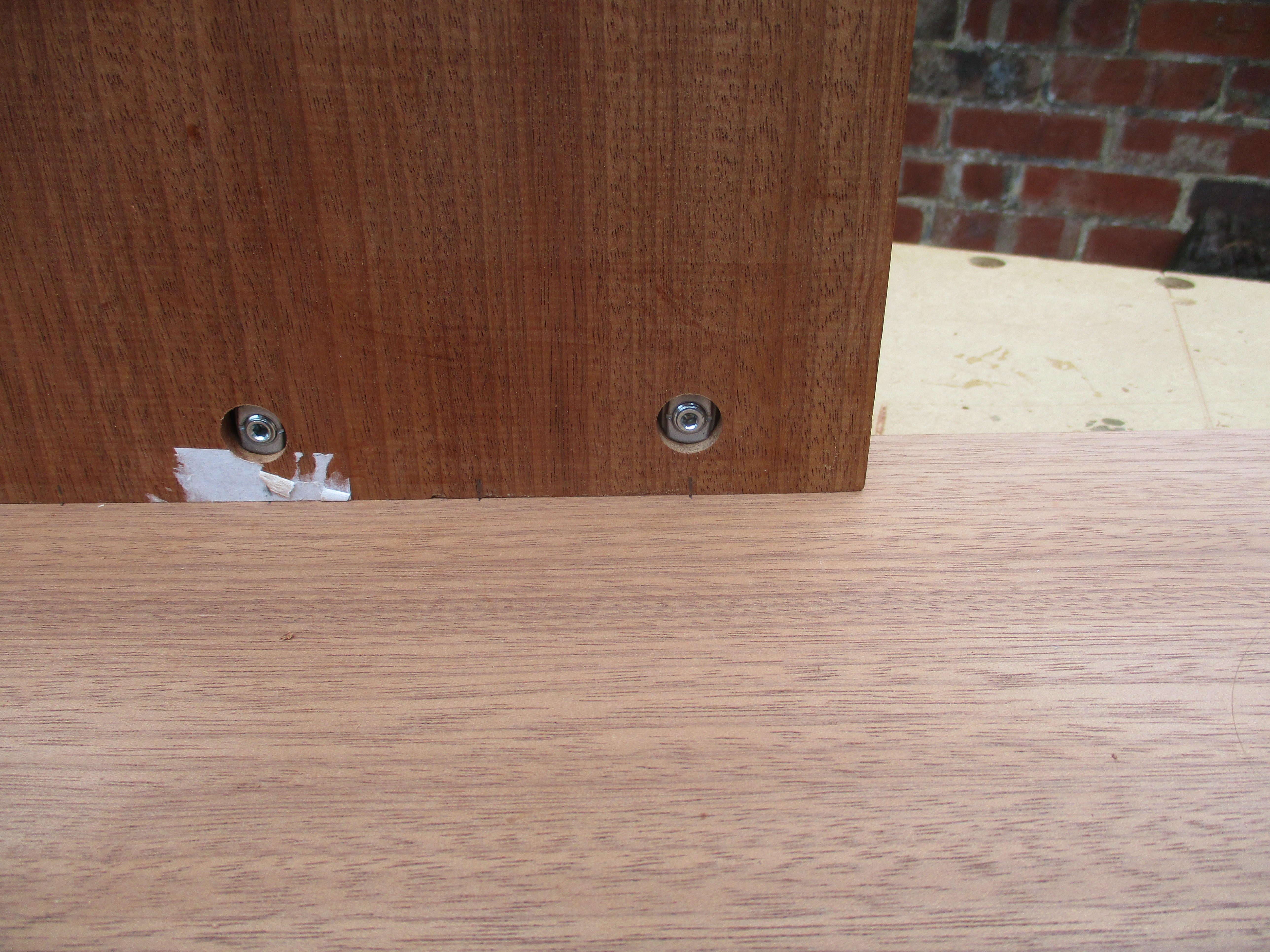 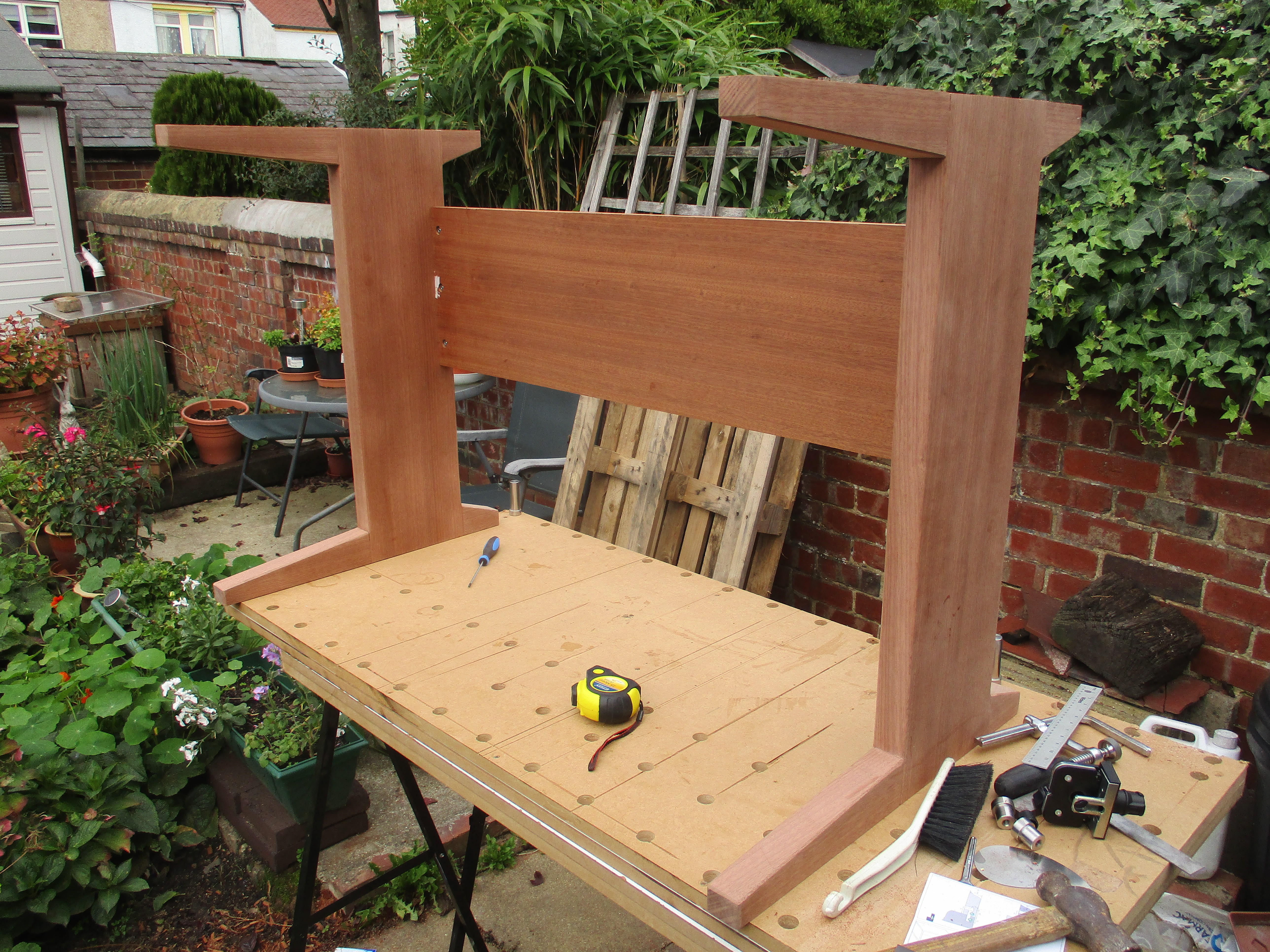 First impressions of this system are positive. It took a couple of minutes to square the instructions, the image in my head and what actually needed to happen, but it's quite definitely a viable option for cabinetry, anything that needs to be assembled on-site or broken down on a semi regular basis.


After that I added a 45degree chamfer to all the edges and sanded all surfaces through the grits to 240. 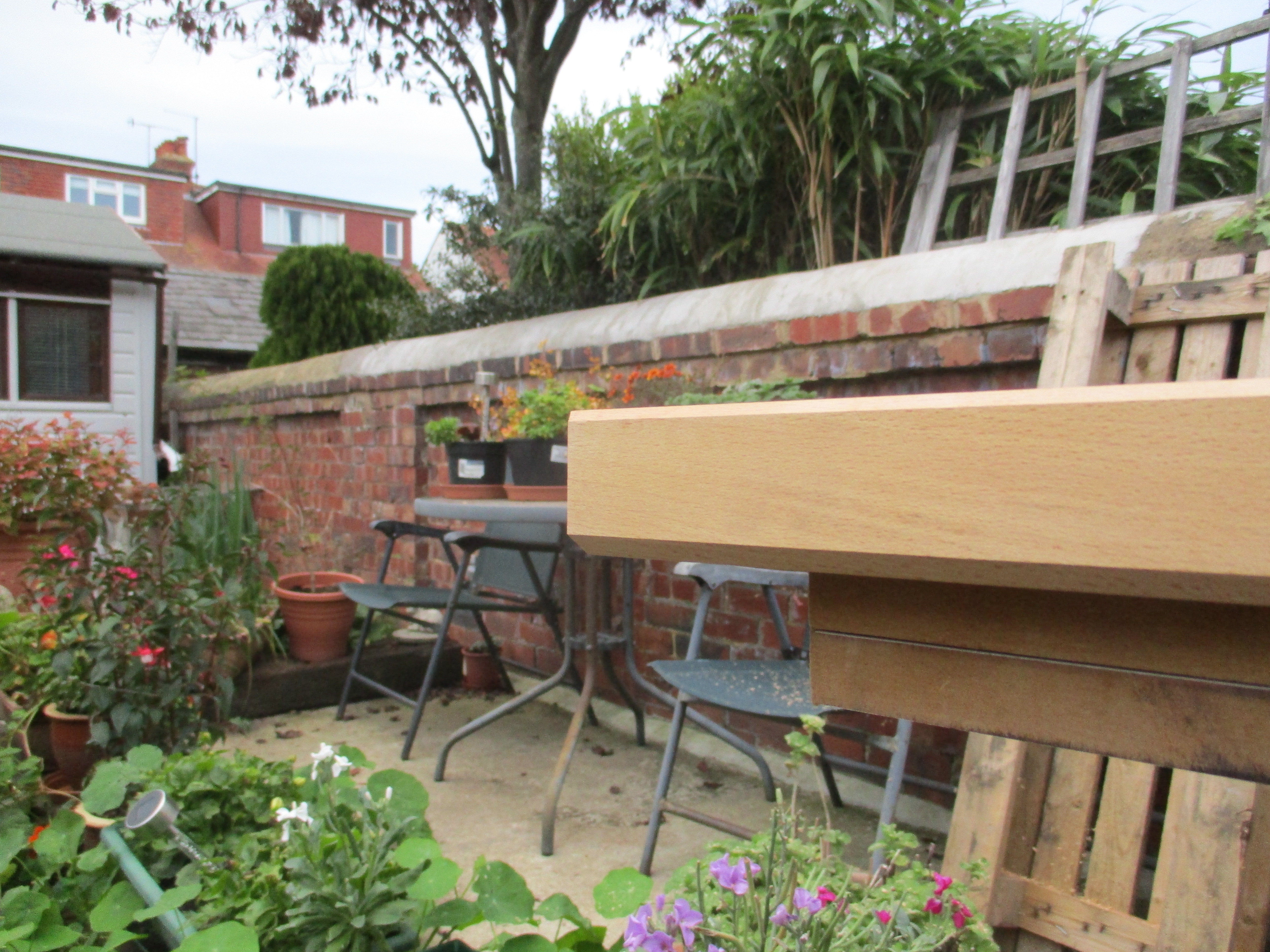 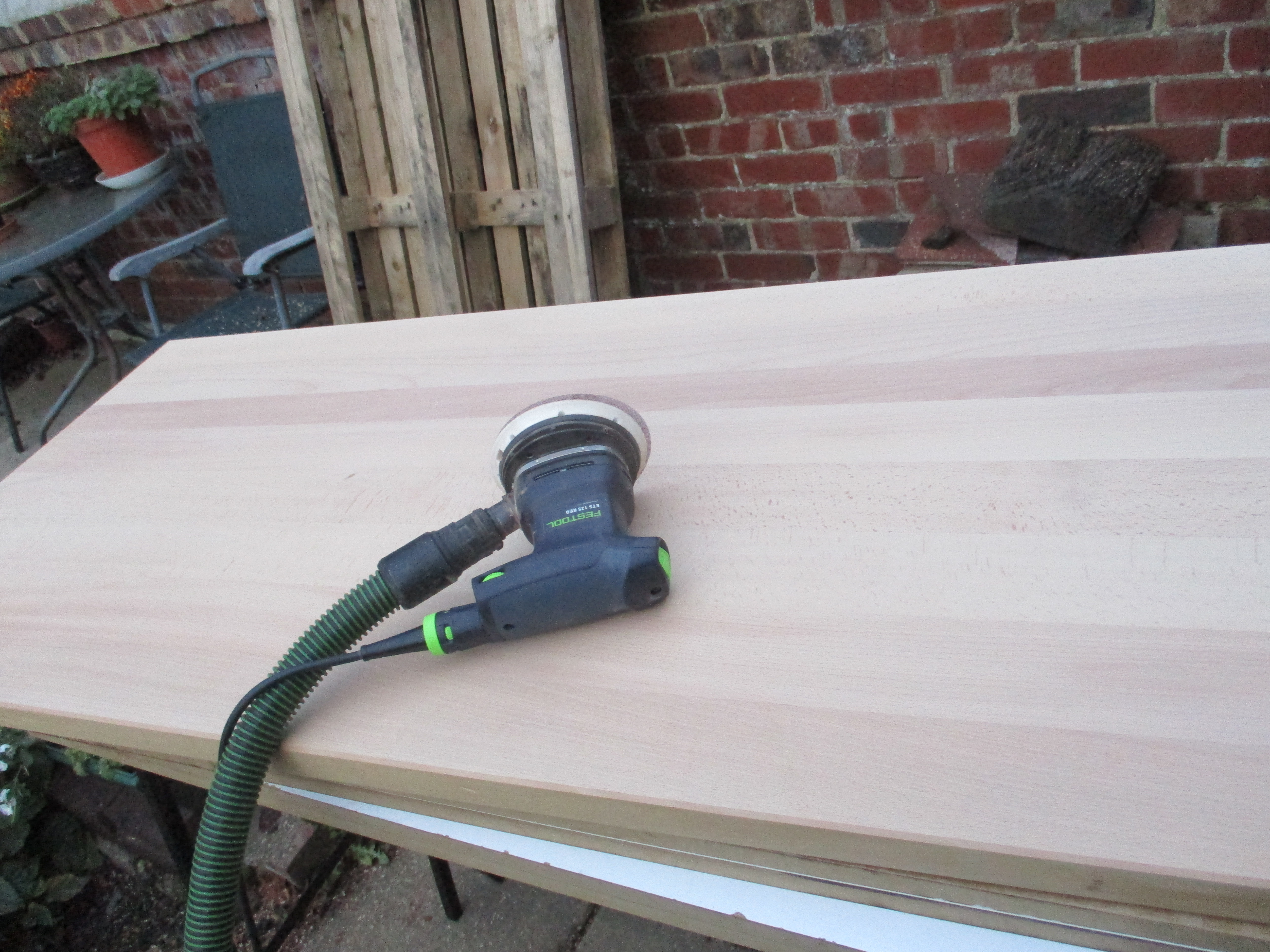 As mentioned earlier, I picked up an articulated keyboard tray. The next task is to sort out a cutaway on the front edge - probably the width of a stave, hoping that the maufacturer of the top didn't use biscuits/dowels/dominoes to join the piece.
Here's the general layout on the underside. The cutaway will come in about as far as the measuring face of the ruler: 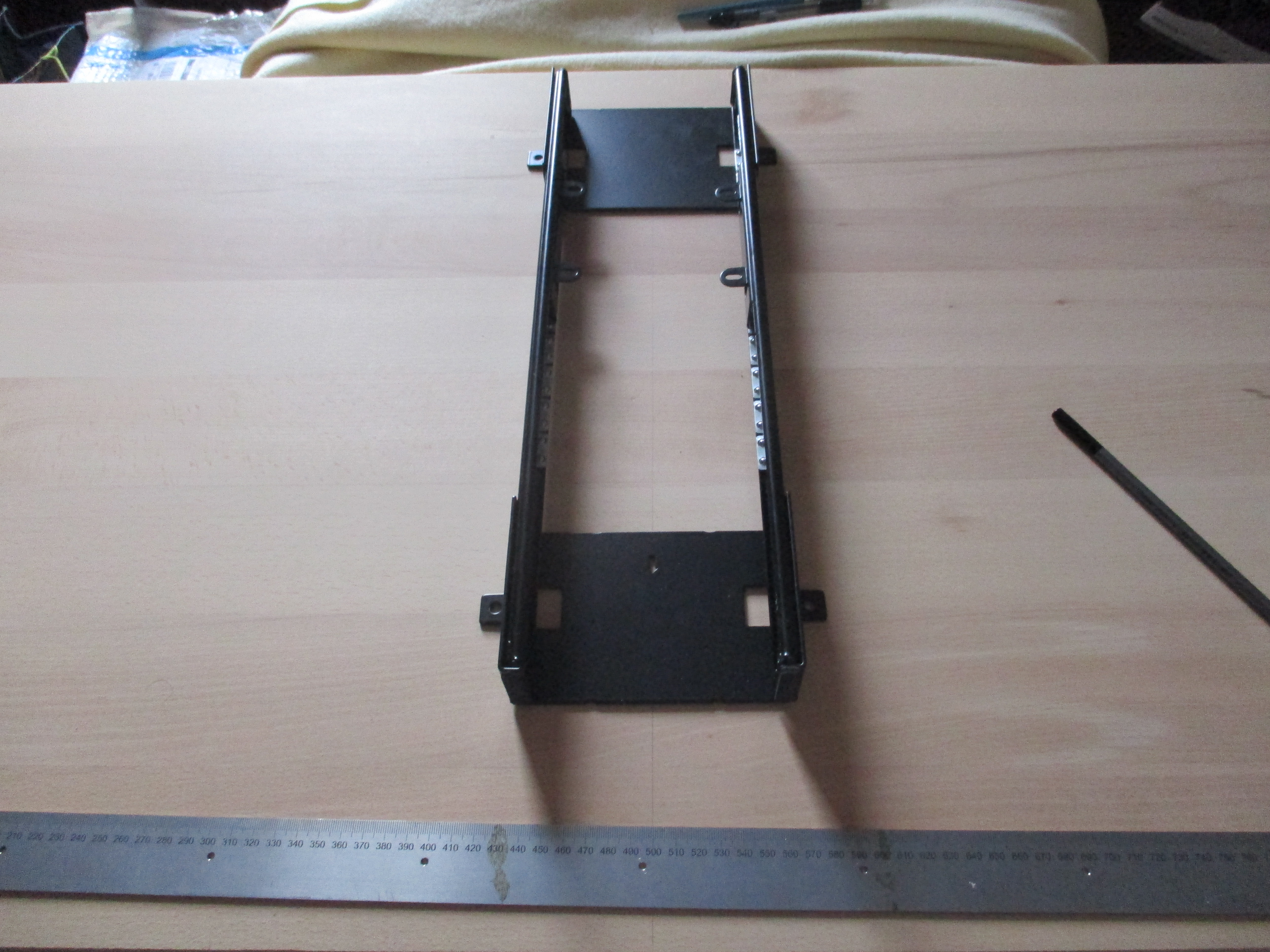 I also cut and profiled eight lengths of brass dowel to pin the joints between upright and horizontal pieces. My original plan was to use them in offset holes to draw the joint together, but felt that there was enough slop in the joints that I needed to glue and clamp them accurately before installing. So while they will still perform a function in holding the join together, they will be more of an aesthetic choice than essential to the integrity of the structure.

I'm back at work for a few days so the next installment will probably be next week
Last edited: 20 Oct 2020

W
Joints for a set of shelves ?