I found plenty of threads about using the Axminster Rip Fence Upgrade for table saws, but didn't find any for a Record Power bandsaw. After confirming with Axminster that this will fit, I ordered it and it arrived at my German address in two days. I installed it this evening, and am very impressed with the fit and function.

It was very easy to drill and tap the M6 threads for the two hex cap screws that hold the brackets to the saw table. I removed the table from the saw so I could drill down into the edge as nearly perpendicular as I could. I started with a 3mm bit and a little cutting oil. Then I went to the 4mm bit, and then to the final 5mm bit, which is the recommended size for the M6 tap.

My only gripe with the kit is the lack of flat washers for the two cap screws. The screw heads bite into the aluminum (aluminium?) brackets, and I prefer washers for the mechanical compression. Fortunately, I had some, so I used them.

Here is a picture of the BS350 with the stock fence and rail. When assembling the saw, I had to decide which side of the blade I wanted the fence, and then it was essentially fixed. All of the alignment for the fence, is made with the two threaded studs that attach the rail to the table. The through holes in the table are large and allow a lot of movement of the rail to set the alignment. 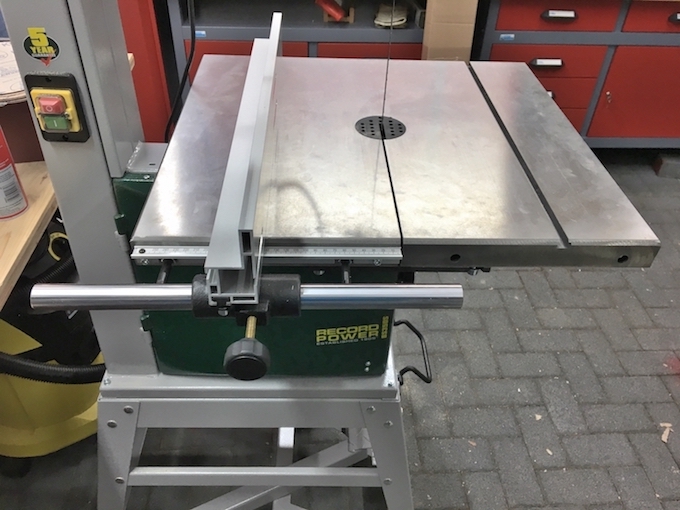 Here is a picture of the BS350S with the Axminster rip fence upgrade. After adjusting the vertical alignment so the fence sits uniformly on the table, I checked the alignment of the fence along the table and with respect to the blade. I didn't have to make any adjustments. 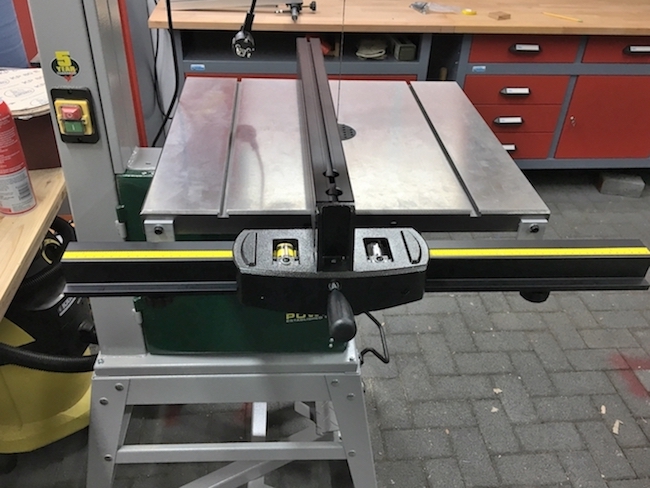 Removing the fence from the rail is easy. Raise the locking lever and the fence lifts off and it not in the way of any cutting. Changing the blade is also easy, because the fence rail can be removed by loosening the two knobs on the bottom of the rail and sliding it out. The locking knobs have square nuts that ride in a channel on the bottom of the rail. I attached one-inch sections of the excess rule tape to the rail and made a little alignment mark on each bracket so I could put the rail in the same spot each time. I removed and installed the rail to the table four times and checked the fence alignment and rule alignment to the blade. Both were dead on each time. 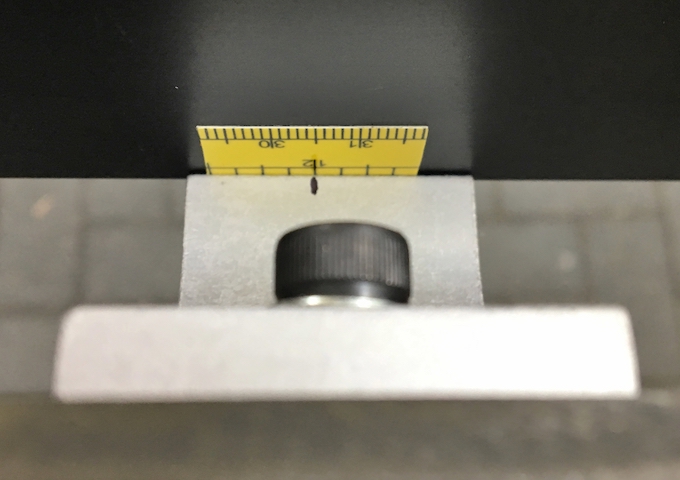 Nice to know the rail is easy to remove to allow blade changing, thanks for posting.

One thought, can't the original holes in the table be used to attach the new rail?

MikeJhn":3roe8aja said:
Nice to know the rail is easy to remove to allow blade changing, thanks for posting.

One thought, can't the original holes in the table be used to attach the new rail?
Click to expand...

You can probably use the existing holes, but you will have to use a longer M6 bolt, nut, and a fender washer because the hole is so large.

To be fair Mike I think the Axminster de-lux rip fence upgrade is a new product, but do like the fact it is supported both ends, will have to see if the fence is reversible to allow cutting on both sides of the blade, no manual on the site as yet, so may have to buy one to find out.

Really interesting posts, thanks to you both.
I have a BS350 and am not really convinced with the fence so any further comments would be really appreciated.
I do have a slight modification (thanks to Woodpig) which allows me to remove the fence without having to faff with the couple of bolts but the overall adjustment with the mounting bar is a bit of a pain.

Unfortunately it does not give me a lot of confidence with the product when Axminster show the de-lux fence with the front rail by my reckoning back to front, this is assuming it uses the same fence support as the rip fence upgrade.

Glynne, the easiest way to remove the stock fence is to tilt the table to nearly 45 degrees and then slide the fence off of the rail.

Mike, yes, it looks like Axminster (or the source) just jumbled the parts together to take the picture. From the extrusion channels of the Deluxe version, it almost looks like the fence can be rotated 90 degrees clockwise for a lower profile fence. It must not be a popular item if the Deluxe version is selling for less than the standard version.

Not sure about it not being popular as I think its a new addition to the store, at least I have not seen it before.

My table saw has a fence that is supported on both ends, and I don't think I like it. It's rock solid when it works, but it's very easy for bits of dust to get captured in one of the mechanisms which throws it off and it'll then be skewif.

Would that not be the same if the guard was only supported one end, or maybe even worse?

Would that not be the same if the guard was only supported one end, or maybe even worse?

I don't think so. With one support, if it's jammed with dust, the whole thing won't move. With 2 supports, if only one end is jammed, the other end still moves, hence the skew.

Sounds like you need a better extract system. No off fence meant. :wink:

My table saw fence is supported both ends, the lever arm pulls a bearing into position on the far end of the fence and fix's it into position, I find it amazingly more accurate than any single end supported fence I have used in the past, and have not experienced any misalignment due to debris ingress into the track or bearings, perhaps my fence arrangement is more tolerant than others, but it is not an expensive machine.

Photo shows the far end of the fence and the bearing that is pulled into position when locking the fence. 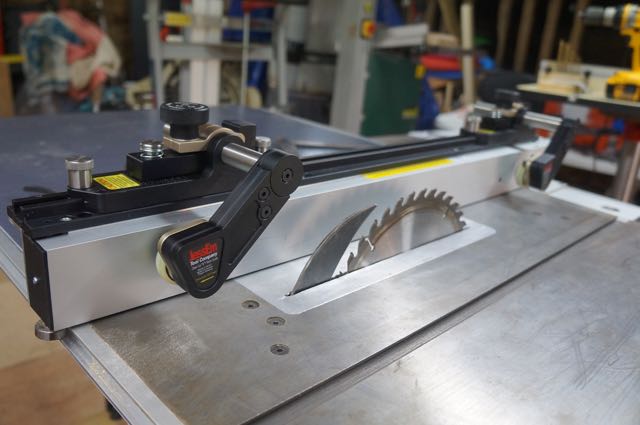 Yeah - perhaps I just have a lower quality fence. Mine has squareish clamps on the ends, so I can see how round clamps like yours would work so much better as there is only one minimal point of contact, so less friction when moving (but enough to keep it locked in place).

I wish I had a dial indicator and a hanging scale so I could demonstrate how much force is required to make the end of the Axminster fence move about 0.25mm. It is really rock steady and it's all I can do to make it budge even the slightest. I can't imagine what kind of side loads are expected that would require a sturdier fence. Maybe someone else who owns one can comment on how sturdy they are.

The de-lux version without a shadow of a doubt is shown incorrectly on the Axminster site, I have corresponded with them twice and they go off on a tangent about a totally different scenario on fence placement, but mine has arrived and looking at the detail and how it fits they have shown it incorrectly on the site, other than that it is a substantial bit of kit, shame Axminster have done it a diss-service with their inadequate attention to detail.

I can see how a bearing on the far end of the fence might help alignment. If the fence is pulled back upon tightening, the bearing will ride along the fence until the fence is aligned along the shortest path across the table. This will also be perpendicular to the front of the table.
Cleaver idea. The bearing will of course make it easier to wobble side to side as there is no friction grip so it would be relying on the pulling force through the fence to keep it square.
Neil

Sent from my GT-I9505 using Tapatalk

Neil S":1d9hxjwq said:
Cleaver idea. The bearing will of course make it easier to wobble side to side as there is no friction grip so it would be relying on the pulling force through the fence to keep it square.
Neil
Click to expand...

Not as easy as no bearing or restraint at all.

This arrived this afternoon from Axminster Specialist Sales Advisor.

Thank you for your email.

Thank you for your clarification regarding the comparison of the second rip fence. The picture in the Deluxe Rip Fence Upgrade kit is misleading as you have pointed out. The picture on the Rip fence upgrade (100205) shows the front rail how it is supposed to be on the deluxe model (102426) and the back rail in the Deluxe upgrade fence should be rotated 90 degrees as you rightly pointed out.

Thank you for pointing this out to us, I will pass this information onto the appropriate personnel and try to rectify this."

Mike I knew it wasn't me. (hammer)

EDIT: the price is now £144.60, so a bit of a bargain at £99 that I bought it for, thanks to Mike K for starting this thread, otherwise I would never have seen the offer. :wink: :lol:
You must log in or register to reply here.
Share:
Facebook Twitter Reddit Pinterest Tumblr WhatsApp Email Link