There are several reasonably interesting wood work videos on YT, but the Raffan ones are in a different league. Rather than just me raving about them, go and have a look! The filming is outstanding, as is commentary and approach. So have a look for yourself. Here are some for a start:


And, almost forgot, put aside plenty of time to watch these, because they are all from start to finish, with lots of details. 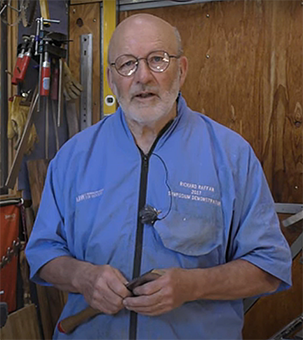 Having spent the last few years watching as many turner's on YouTube as I could find I'm not sure how I've missed this guy, just watched a few of his videos and have to say they were very easy watching, another awesome Turner added to my subscription list.

That’s a blast from the past, I’ve a few of Richard’s books must be 20 years old a really inspirational Turner, he must be getting on a bit by now I seem to remember he emigrated to Australia a very long while ago.

Doug B said:
That’s a blast from the past, I’ve a few of Richard’s books must be 20 years old a really inspirational Turner, he must be getting on a bit by now I seem to remember he emigrated to Australia a very long while ago.
Click to expand...

His youtube only seems to be about a month old, his bio also says he is in Australia

Stigmorgan said:
His youtube only seems to be about a month old, his bio also says he is in Australia
Click to expand...

They are excellent videos, I’ve been watching them over the last couple of weeks. I think I’m right in saying that Richard has earned a living as a “production” wood turner, ie he’s batched out large quantities of everyday items. His hollowing technique for instance is extremely fast (and quite scary to the untutored eye!).
D

If I'm remembering him correctly, he did a lot of video from the VCR and DVD era (i.e., before youtube had high res videos and everyone went to streaming).

I'm sure the standard for production and capture was more important back then, and the rate of production was lower (i.e, people weren't producing two hours of produced video each and every week.

The flip side of that (this isn't aimed at raffan) is that people who bought the DVDs often thought that what's in each one was definitive - "the way", and the more confident the presenter (or assertive), the more credible.

The guy who got me into woodworking had me convinced that nobody other than Pat Warner was worth reading when it came to router use. Pat was always helpful and courteous, but his method of stating something was "the only way" was very convincing to my friend and I was surprised that when pat came to the forums in the US, a lot of people discarded what he said as just being someone else. Still have a couple of acrylic router bases, or plexi or whatever you call it - sitting in my cabinet gathering dust because I don't do much with routers other than inaccurate work (waste removing in something that will be trimmed to size by hand tools or very occasional template routing for guitar bodies).

Back to raffan and some of the other turning instructors - they can provide information that's 5 times as good as the next "something for nothing" woodworking presenter on youtube and still get 1/50th of the views. Cat's out of the bag and it's probably not going back in.

Doug B said:
That’s a blast from the past, I’ve a few of Richard’s books must be 20 years old a really inspirational Turner, he must be getting on a bit by now I seem to remember he emigrated to Australia a very long while ago.
Click to expand...

He just announced he has comes to terms he is done with doing demonstrations. He said he thought he had another 5 years but his health caught up to him. He does not feel he can give a quality demo anymore due to not being able to stand for long periods, etc. This all came to be in the last month or so. At late 70’s your health can change from one day to the next.

We all must not put off what we want to do. If you have big plans, do them! Never put off what you can do today til tomorrow !
E

Strangely enough I found him on you tube last week. He's obviously highly skilled and has the confidence of someone who does it for a living. As a total newb it's awesome to watch but scared the rubbish out of me after my diet of other woodturning 101 videos. Love the lack of the usual preteniousness from many other channels. Well worth checking out.

You can pick up alot of stuff from production turners, davedalbywoodturning and Richard findley post alot on their instagram. Their skew work is unreal.

This one of Richard's videos on catches from my own bookmarks - I don't know whether it came before or after the first video in this thread.

His videos are often a chance to see Australian Vicmarc lathes in action, oh, and look up his books too. I had one of his on almost continual loan from my local library for a while.
Last edited: 23 Jan 2022
O

I have seen him do a couple of demos a few years ago. Here in Oz he is regarded as "the man" in turning circles. The thing that got me was his economy of movement and the sheer speed he gets the thing done. Still to make a living at turning all your life you have to be pretty good. New players and seasoned turners can learn a lot from him. His style of teaching is just the facts and no preaching. So good to see proper tool use on a video rather than some wannabe scrape away the whole job from go to woe with a tungsten tip tool.
Regards
John
R

I'm still amazed at how hard he goes in and takes massive cuts with no issue. The material he takes off in one go with a scraper and the finish he gets is also incredible. Just goes to show what sharp tools, technique and the perfect angle can achieve.

From what I understood so was all these videos available as DVDs, but Raffan has decided to put them out on YT. For which I am very grateful

I watched one of his videos. I think he was explaining back hollowing, my god scary or what. But one comment he made was that making spoons he was having to make about 9 an hour to be in profit, WOW that is some going. Top man.
You must log in or register to reply here.

Y
Some personal thoughts on the question of 'When might Woodturning Club Meetings start again'?