Very good, pertinent, and clearly-reasoned posts from both marcros and MikeG IMO.

I missed this thread (because I wasn't looking), but just got pointed to it. I've not found acid maintenance of files favorable, but I'm a heavy user of files and generally try to find a supply that makes their use economical if they're going to be worn to the point of obliteration.

Boggs tool here uses a liquid hone process (probably someone in the UK or europe who does it - or ten firms) on files that aren't totally gone and they are supposedly better in terms of sharpness than new files. I haven't tried yet, but have some vixens that I've worn out doing metalwork and would love to get another round out of them.

there's some brittleness to the teeth after acid, and I would assume that in cases where files are improved (not just initially, but compared to a new file or a liquid honed file, someone is probably using files less heavily. The cost of files in the old days must've been astronomical and babying them seems to make sense. Now, I would gauge the cost of files in making a plane iron at around $4. I can live with it.

I have made 8 or 10 knives out of files (forging them) after spark testing the files to make sure they're high carbon through and through, and two and a half chisels so far - soon to be 5. Files as found are hard and when I've broken them, it could be my imagination, but they aren't that fine grained. When they are forged partially to shape then ground, hardened and tempered to an accurate point, they make spectacular knives and both chisels that I've made are better than any of my commercial chisels other than japanese. I'd suspect that the reason such plain steel isn't used for chisels now is two-fold:
1) nobody cares
2) there is a lot of warping and follow-up work. No big deal if you're making your own, but commercially wouldn't be that great - it would take the same skill to straighten them by hammering just after heat treat as it does to bend the files or as it does for someone to adjust razors

So, that's my suggestion for them - forge them partially to shape and then file or grind them to something that you want. I haven't managed to break any that I've forged, but I've broken the tangs off of a couple of files that weren't tempered back or re-forged. If not, find a reasonable supply or a liquid hone place or both - after strong phosphoric etch, they just don't hold the tips of their teeth well, and I often use files to a level of dullness that's too far for acid etch, anyway.

Back to the forged bits - the plain-ness of the steel makes them really nice sharpening - they hold on to the wire edge very little and in impact or knife work, have great impact toughness, even at reasonably high hardness. 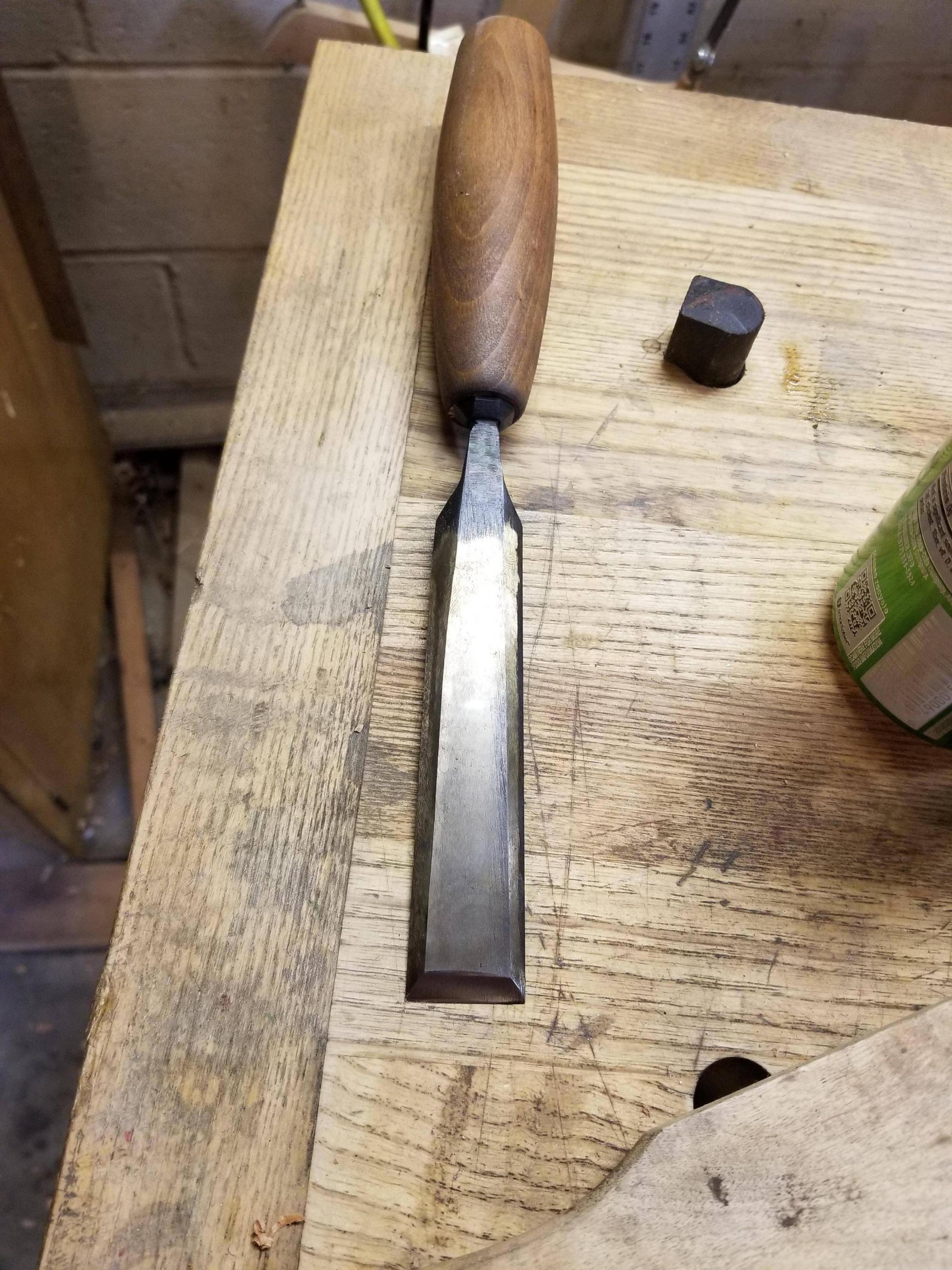 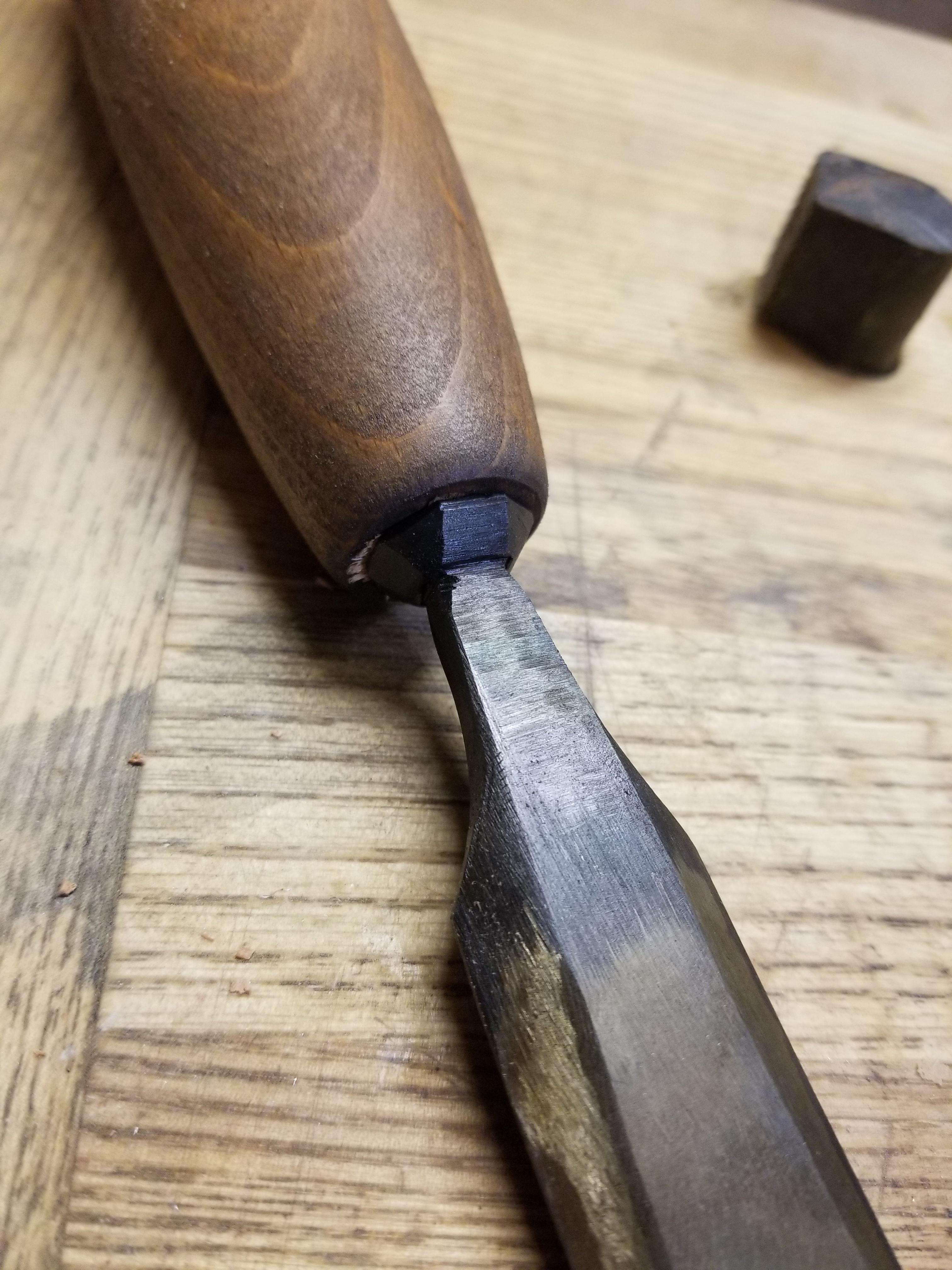 Never really intended to make chisels as there are so many good ones around for not much money, but the performance of the little marking knives made of saw files (far sweeter to use and sharpen than even O1) sent me in this direction. After two, I think I know how to get the aesthetics on the next ones right (this one is OK - the handle is "fast as you can make it to see if the chisel is good", but that can be addressed another time. The chisel needs a bit of hand adjustment to the lines and I don't think it'll be spotted as easily as something like a file that's just ground to shape.
B

I taught myself to turn and and used Jeff Stokes and Frank Pain articles in 'The Woodworker'.. I made a couple of scrapers from old files that saw me through until I mastered the skew. And yes, heat treating the files was advised.. Never had any problems. Don't call myself a Turner mind and I still have heart-stopping moments with the skew digging in!!! I just don't do enough turning; E O S.

DW - as of today I know why there is concern about case/surface hardened rasps and files.

I had ordered a couple of Far Eastern rasps along with one of those wire rasp-sticks I wanted to try out.

The rasp stick is wicked sharp - don't quite know how to use it.

but I did happen to need a rasp straight away, so I tried the carvers rasps -- they cut very well, especially for such fine teeth (machine-stitched), but leave heavy marks - will they last, I don't know, but looks good? One is black (carburise hardened?) and the other is golden (could be titanium nitrided).

However, the core is so soft, that I can easily bend them, especially the black one - far softer than the old bodywork Aven/Millenicut type, which bent slightly with screw force applied.

Definitely no chisels will be made from these
T

Haven't really got any views on the effort or effectiveness of trying to restore a file...I was always taught to keep them maintained through their life cycle with thorough cleaning and by only cutting with them whilst moving them in the correct direction. So many people seem to think they cut in both directions and aren't in the habit of lifting on the backstroke resulting in the teeth getting bruised over into the gully or crushing swarf into it therin rendering the tool inadequate at its designed task. When a file did reach the end of its life, I like so many other’s , generally repurposed mine (along with those big hacksaw blades off machine saws) into knives.
You must log in or register to reply here.
Share:
Facebook Twitter Reddit Pinterest Tumblr WhatsApp Email Link