Replacement pillar drill column and base?

I have a lovely old Elliott Progress 2GS, which has a large floor base, a cast iron pillar about 800mm tall, and then a 2.75" column which mounts into a socket on top of that. This limits how low the table can be moved, so I'd like to swap to a full ~1.8m column which would go straight into a (different) floor base. Does anyone know of any dealers or 'breakers yards' for machine tools where I might get such items? Ideally not too far from Sheffield!

Not my drill, but same model: 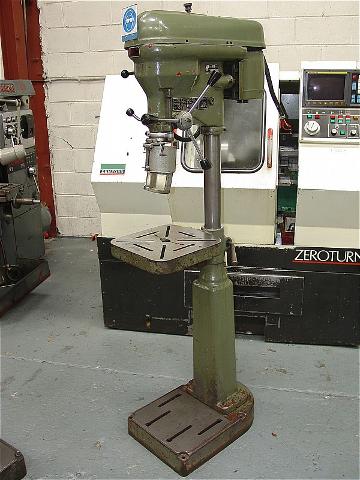 I feel doubtful that you will get what you want somehow, could you not turn the existing table to the back out of the way and then put various boxes of different heights on the floor stand /base for the odd time you need to drill something large? Ian

+1...and put a car jack inside it.
Possibly even better than the table, as it would stay put.
Haven't seen a method used, although I'm sure some methods are common, which would allow for the table to be placed in the exact same position after being wound down and up again.

Yes that is an option I suppose. Or perhaps a means of lowering the head down the column...

Mowgli said:
Yes that is an option I suppose. Or perhaps a means of lowering the head down the column...

I was looking at the photo and was thinking that it seemed such a large jump from the table at its lowest to the base which is also set up to take hold downs, the column doesn't slide down inside the base does it?
Its a great looking drill though and rather than mess with it I would be investing in something like MDF boxes to make the jump.
Steve.

I would keep my eyes peeled locally for a cheap import with the right diameter column, buy it and chuck, sell or set the head aside from it. Keep the old column for the day when you want to sell it whole. But really how often do you need to lower the table below the range it has now?

It's fairly rare, I admit, but the throat on the table when using a long drill bit is only about 300mm or less, so for such a big machine it's not that versatile. I have a bench-top drill which has more clearance (but doesn't have the very useful low-speed back gear. 12rpm!). If it would be an easy swap to a full-height column then it would be more useful when drilling larger objects. Probably not worth going to huge effort to acheive though I suppose, when some boxes mounted to the base and moving the head down the column will probably work.
S

Very rare but I did see one listed a few months ago, a floor base off a fobco 7-eight or 10- eight would probably do what you need. I've never checked the column diameter but I think it's as big or bigger than yours so easier to adapt than a base made for a skinny column. The bases are big and stable.
Personally, I think the one pictured looks great and the box suggestions work for me (look at old Archdale and other radial drills), but I see what you mean about limited clearance between the chuck and the adjustable table.
D

2.75" seems to be a standard column diameter for some of these older drills, for example my Meddings MB4. I bought an MF4 (floor version) recently for parts with a smashed table and faulty head. So if you're not in a hurry, it may be worth setting an alert for 'parts' machines. Make sure you get the seller to measure the diameter accurately though. For example, Meddings changed from 2.75" to 70mm around the 1970's I believe.
F

You can get 304 stainless exhaust tube in 70mm, which is only 0.15mm over. It's typically 1.5mm wall but very stiff. A piece 2m long Would be about £50 ish. Then it would be simple enough to fabricate a mount to bolt in place of your existing column mounting.
S

A big old drill like this can be pushing 300Kg. Their columns are usually far thicker walled than 1.5mm (by 3 or 4x). I wouldn't personally want to cheap out on the spec.
O

There is on on ebay has an entirely different stand and tube its in Barnsley, perhaps an option would be to buy this and swap parts around to get what you need and sell on the resulting drill? Might even break even?
Well just a thought

Is there any chance that the column extends into the box section. Looking at the spec. it's unlikely.
I'm sure you can lower the drill head. The column will poke out the top. Swing the upper table out of the way and use the lower table. not very convenient, and not sure how much you will gain, but worth looking at.
M

Closure for those who made suggestions - I tried a column from a Startrite Mercury from the classifieds here, but it turned out to be a hollow tube which didn't fill me with confidence, and about 300mm too short, so that was swiftly moved on. I have just picked up (at great expense) a stripped down identical drill however, with the nice long column! It'll be a long restoration process, probably ending up with the best bits combined onto one machine and then sell the rest either as parts or a functioning drill. If anyone stumbles across this thread looking for spare parts, do get in touch 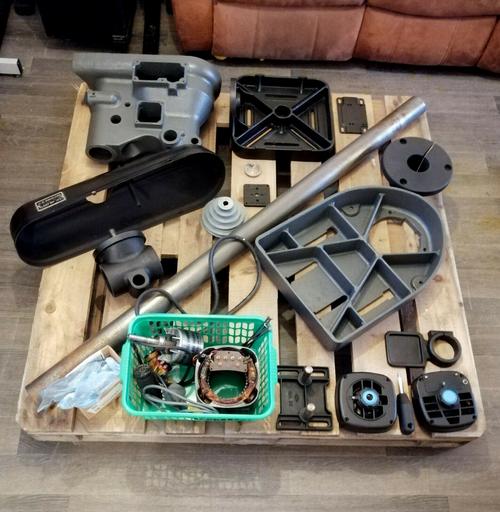 I have just sold the same model, essentially for the same reason, I fully rebuilt it and I can assure you the column is a solid bar that fits into a cast socket at the top of the cast base and does not go straight through. You could keep a look out for an Elliot series 1 floor standing drill with the low base. From memory it uses the same column diameter. Buy it, swap it out and resell it with your own base. The 2GS was essentially sold as a metalwork drill, the series 1 as a woodwork/ light metalwork drill.
Nigel
You must log in or register to reply here.