Spent a few hours bringing back into use on old Multico tbs350 bandsaw. The motor and all the bearings are perfectly good so didn't want to just scrap it. It needed a new post for the upper guides and the upper wheel tensioner fixing. It's now working and cutting straight, for anything around an inch thick. Not going to post any pictures as it looks like Heath and Robinson repaired it and had an argument whilst doing it! Issue is that it stalls because the drive belts also need replacing, the one to the bottom wheel is the main culprit. The tensioner is at the limit of its travel and there's still too much play in it. Anyone know the sizes? Don't just want to cut them off as I need to do some cutting with it. Know it's a long-shot having done a search on here, but someone might know.
Thanks in advance.
B

If you can’t work it out by measuring the existing (and subtracting a bit), or geometrically (using diameter of wheels and their distance apart), could you buy a link belt and experiment?
S

Thanks for the replies, it's a 2 wheel model with 14" wheels. Looks identical to the Aximinster awsbs3 and similar to the Record bs300. It's dated 1988 so not surprising there's little on the web about them, but looks they've been copied/cloned by other manufacturers.
May well end up measuring, but the question is how much to subtract, 1/2", 1"? That's my main problem as I could measure and order a couple of belts and still have them too long, or short.
The link belt would work, was just hoping some had ordered some in the past and still had the details.

Try these for info and help -

A great firm to deal with.
S

Thanks, will do.
New belts should turn it into a fairly capable machine, as far as can be, as it has a 750w motor and the frame is nearly 3mm thick, having had Heath cut into it. There's an Axminster clone on ebay at the moment with a 375w motor.
R

How are you getting on with this bandsaw so far?
S

It's exceeded expectations, put it that way. Now the belts have been changed, thanks to pointers received above, it will cut 4" beech and 3" oak, which is what I've been cutting on it, and why I wanted to get it working. In that sense it saves having to use the 'flip-and-cut' method with circular saw, which I hate. I'll say the blade helps a great deal. It's currently running a Tuffsaws sabrecut 5/8" 3tpi blade bought in 2019 along with a m42 1/2" blade I haven't tried yet, which is how long it's taken to get this saw running with along with everything else. It's also been put onto a much lower cabinet with wheels. The old original stand had the saw so high it felt like cutting the wood up by your chin, and at least now some roller stands can be used to feed the wood through.
For the amusement of those with greater skills in the metal working dept, and doubtless the correct kit, a couple of photos showing the upper guide assembly, and the empty holes where the original fitments went and a new hole 'carefully' cut with an angle grinder. The replacement is a solid tube, which slides in a hollow tube, adjusted by the two bolts. The whole assembly being clamped via a pipe clamp of all things on the top of the band saw, that required another hole in case, but this time drilled with a step-drill. Behind that is another bolt which adjusts the tilt of the top wheel. It takes a fair of amount patience to get everything aligned, that blade will stay on until blunt. For smaller items I bought a ferrex 10" aka Aldi special as there wasn't the budget to buy a proper replacement for the multico. If the bits in the box had been correct for this saw then it would have been a great deal easier to reassemble and I've no doubt the complete machines still in use are very good. But they're now regarded as 'old' and no-one wants these old machines. 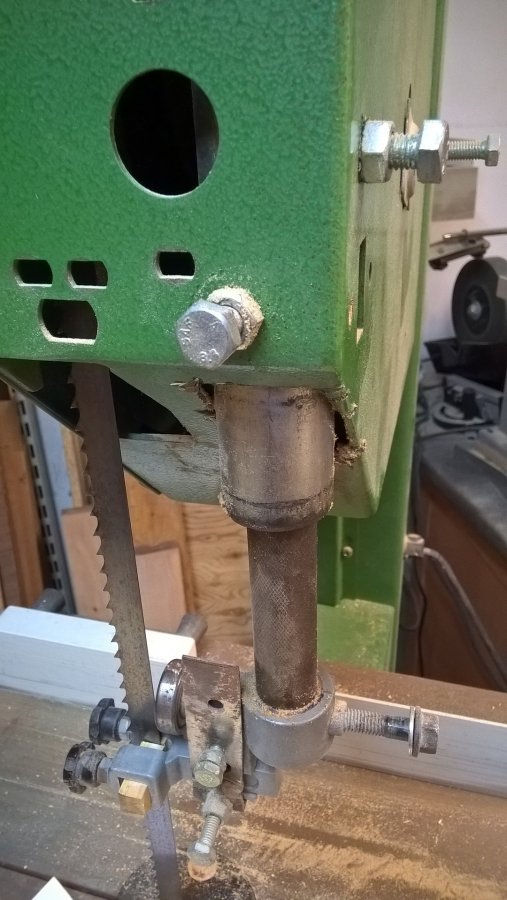 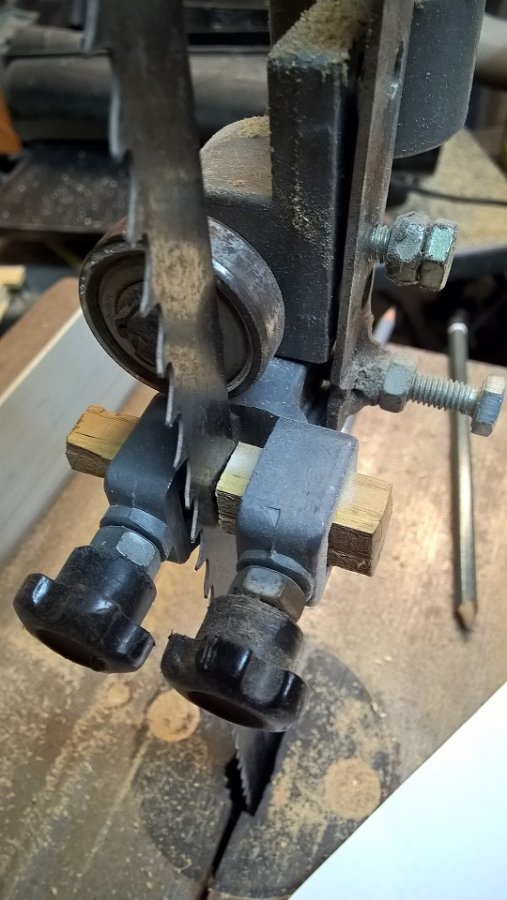 I am no expert but having just changed the blade on the Multico to one from @tuffsaws 3TPI, I am well impressed. It cut an arc on a 100mm thick oak with ease. I am not even sure if I have set it all up correctly but I'm happy with the cut. I have further checks to make having watched a few videos online. For instance my engineer's square is too long so I'll be getting a smaller one to ensure the blade is cutting square to the table.

This machine just popped up on my local, along with the Sumaco and likely this Axi machine are seemingly the same thing. 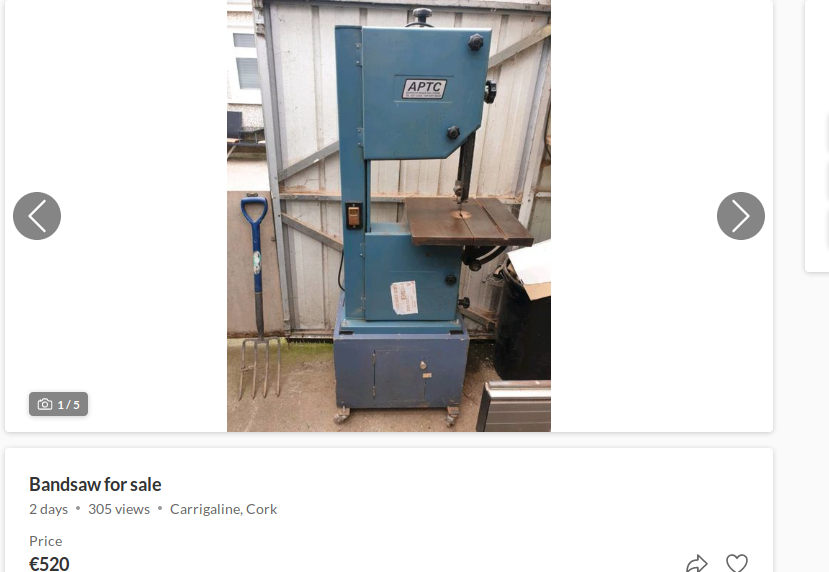 Mine came with a spare belt as well as a used one. I will need to take a closer look and see if there any markings on there.
Sawdustandwax might be able to confirm as I believe he got a replacement for his one
R