Hello Gang, I moved house in September, for a plethora of reasons, and we bought the wee place in the pictures below. As you can see, one original owner's sense of taste was only in their mouths and the ghastly "salmon" has got to go. It is also - our builder thinks - contributing to damp cavity insulation by limiting breathability and (possibly?) creating some condensation on exterior wall faces inside...if that make sense?
Question is, how to remove it? As it is a rough wall, poultice and plastic sheet treatments won't work? They cannot be applied closely enough?
Will power washing damage the face of brick and block? Block incidentally, made from steel mill waste or summat like it, dark black dust.
Is there a chemical that will not break the bank? I'm talking approx 80 square metres here... 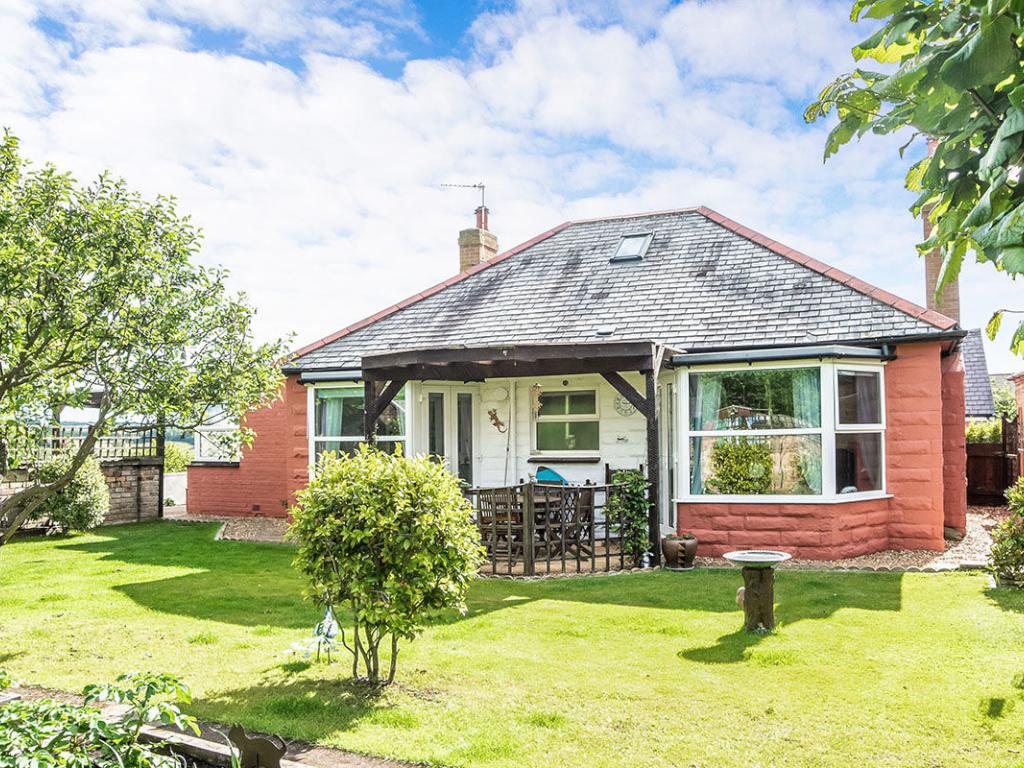 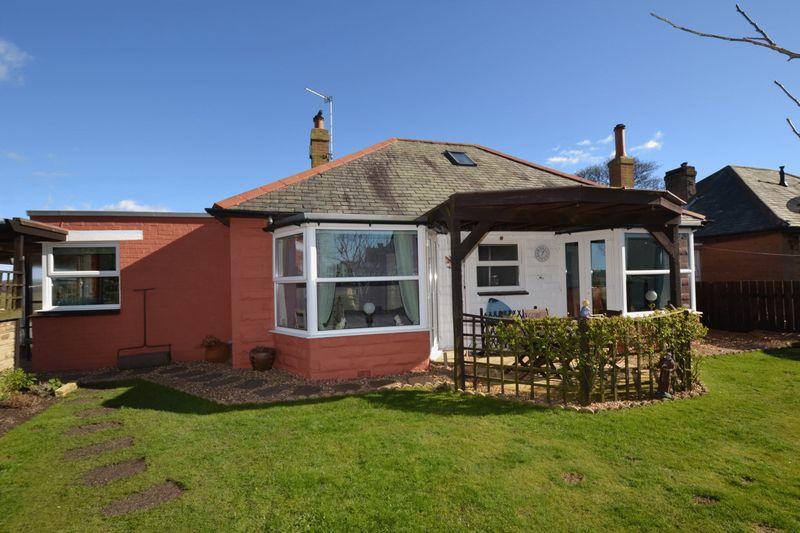 In both these rear facade shots from the estate agents blurb, the main house is on the right, sintered(??) block, the extension on the left is rustic brick. Colour by Jean Paul Gaultier one presumes...

PS, yes, that is a miniature of Marilyn Monroe sitting on the fence round the patio...did I say the P.O.'s taste was up the left? (They may have been colourblind...the bedroom was electric purple and fluorescent lime...I threatened to wear welding goggles to get to sleep first night...).

I used to have a bedroom with a black ceiling and a purple carpet. Oh, and a yellow quilt cover, two tangerine walls with turquoise skirtings and two turquoise walls with tangerine skirtings. The door was blue. In my defence, I was only seventeen.
My mother bought a bungalow in which everything in the lounge and hallway was red. Everything. Even the lightbulbs. Five coats of paint to cover it properly.

Dry ice blasting would remove the paint entirely and cleanly, and leave an undamaged substrate. However, it isn't cheap. At the other end of the effort scale would be using strippers, and the best way to find the right one is to contactAnglia Lime in Sudbury, Suffolk, who have a range of products and an expertise unmatched anywhere in my experience. Buy yourself some industrial rubber gloves............
R

You could probably soda blast it too.

I doubt the paint is causing the problems you describe though.
S

Cheers Mike, spot on. I think I am going to have to grit my teeth (financially) but you've now seen it, could you live with it?

Phil, Ozzy Osbourne phase was it?

One of my previous Headmasters had the bright(?) idea of painting Reception - a Victorian, high-ceilinged, airy room - in a deep, organic, almost pulsating, red. As said area had two magnificent sunny windows looking out over our grounds,it became known as "The Womb with a View"...

"I doubt the paint is causing the problems you describe though."
Click to expand...

Mehhh..I know Rorschach...I wasn't completely convinced either, but there is little doubt I think that this particular nightmare pink medium is sealing the walls. Close up, the surface resembles icing on a cake. I have managed to access the cavity insulation through an under-floor air-brick and it feels damp; whether that is upward ingress, from the substratum, or as a consequence of the LSD-induced colour scheme, I cannot empirically say.

Thank you, Sam
B

Looking at the pictures, where are the gutter down pipes, and does it have a proper Damp-proof course?
Those air bricks look a bit close to ground level.

There was a hoo ha some while back about cavity wall insulation, where people in areas of extreme wind and rain were advised it was better not to have it by the RICS. This would include just about eveywhere in this County, but I don't recall which sort of cavity insulation it was. M.G. will probably tell us.
S

Hi Bod, damp course is fine, just painted in, and no, I do not see evidence of bridging by paint.
Air bricks, yes, some below damp course, others very emphatically retrofitted above the damp course, but well integrated with slate barriers below. No evidence of damp penetration via them.
Down pipes central on white wall, sharing a gully with shower/whb outfall. I've inspected, cleaned and simulated heavy rainfall into them, from roof level down. No problems. Loo pipe separate, under the house...:shock: ...
Just tried domestic pressure washer on the pink nightmare, didn't even mark it. ](*,) .
Sam
S

Hi Phil. Yaa whaaa? NO cavity insulation? Naww...couldn't be surely? In our climate? I'll be prepared to masticate headgear if proven otherwise... 8)
Sam

It seems to be mainly polystyrene beads that are the problem. If you google cavity wall installation and damp problems there's loads.
S

Ah. Mine is either blown fibre or deteriorated fibreglass or rockwool batts.

The thing is, if you say the paint is sealing the moisture in, well where is that moisture coming from in the first place? It can only be coming up from the ground, it can't be coming out from the interior of the house.

This is why I say the paint isn't causing the problem, it's just helping highlight an existing problem.

As Phil has said, cavity wall insulation isn't always a great idea depending on your location.

Rorschach":3l4hzt5e said:
The thing is, if you say the paint is sealing the moisture in, well where is that moisture coming from in the first place? It can only be coming up from the ground, it can't be coming out from the interior of the house.........
Click to expand...

Yes it can. That's the obvious place for moisture to come from. The inside of a heated house is wetter than the outside, and condensation on the inside of uninsulated walls is an enormous problem.

I can't see the paint being an issue if the cavity is ventilated, and from what has been said, there seems to be plenty of ventilation. The issue therefore is either a leak, rising damp, or condensation.
S

Mike, we had two roof leaks, now fixed, neither the liquid volumes nor the paths of either were sufficient to reach the two major condensation patches.
Rising damp I have experience of from a previous house and there are no typical signs: blown plaster, effluoresence, tide marks on walls, smell, yada, yada.
My money is on condensation pure and simple, and that boils down to ventilation and not letting surfaces chill down to dew point? I am therefore relatively unconcerned about the state of the cavity wall insulation, but I am very actively considering Sovereign's 'Warm Touch" product for external wall interior faces, after anti-mould treatment, to address the dew point/cold surface occurence. I have also replaced bathroom and kitchen fans to rectify mediocre performance in both. This aspect of the overall situation is, I postulate, a minor issue.
To get back to my original plea, for other, complicated reasons, too long-winded to fully air here, I need to get that offence to the retinas off the walls. I suspect chemical stripping may be the most financially acceptable option; physical abrasion methods I have quotation requests out for, but I am not confident they will be viable on my budget.
Thank you for your input and especially, the link above to Anglia Lime.
Sam

Yep, in a nutshell.
R

Rorschach":m3ywkniq said:
The thing is, if you say the paint is sealing the moisture in, well where is that moisture coming from in the first place? It can only be coming up from the ground, it can't be coming out from the interior of the house.........
Click to expand...

Yes it can. That's the obvious place for moisture to come from. The inside of a heated house is wetter than the outside, and condensation on the inside of uninsulated walls is an enormous problem.

I can't see the paint being an issue if the cavity is ventilated, and from what has been said, there seems to be plenty of ventilation. The issue therefore is either a leak, rising damp, or condensation.
Click to expand...

That's not what we are talking about here though, you are talking about condensation on inner surface of walls because they are cold. There is not sufficient moisture travelling through the inner skin and soaking insulation in the cavity.
Paint on the outside walls does not cause condensation or damp inside a house with a cavity, insulated or not.

With that in mind, what happens to outside of the house is a moot point, re-painting or removal makes no difference, the problem lies elsewhere.
S

Not quite sure what point(s) you are making Rorshach...to reiterate, I see the condensation in two built in, uninsulated, wardrobes against external walls, as relatively unventilated spaces, going below dew point, as they chill down. Solution: insulate internally to wardrobes to prevent the dew point problem.
The second issue, and I'm not wholly convinced it IS a full-sized, hand-wringing issue, is that underfloor voids in the house, and the spillage of cavity wall insulation onto said surfaces, seemed damp. In part I put that down to a paucity of air bricks, preventing a clear 'blow through' and I'm installing vents to augment what is already there. My - very experienced - local builder said HE suspected that the pink mess was sealing the external surface of the wall preventing it breathing, and possibly contributing to the apparently damp cavity wall insulation. Just a gut feeling, no empirical evidence, as we do not know the provenance of the flamingo paint.
For complicated 'local vernacular' and aesthetic reasons, I want the 'Hellboy' makeup gone. If its departure contributes to drying out a suspected, but by no means proven, mild issue with cavity wall insulation, that's a bonus.
I am looking too at the long term resell value, and, given the fact our house looks like a 'working girl' alongside 'the Mothers' Union' of the others in our cul-de-sac...
HTH, Sam..