I am looking at raising and lowering my router in the router table. As it currently stands I have to force the router up and hold it in position and then lock its position. Check the cutting depth and if wrong begin again. As you can imagine its not very accurate.

I have looked online and people seem to use car jacks for this purpose. I am wondering if I get a cheap one such as below would it be OK? Would it cause damage to the router? I have a Dewalt DW622 and I think it has some vents on the top. The router table is bolted down to the table to no worries about the router table itself raising when the router is raised.

Also I am wondering if just using the handle that comes with it will do or if I have to build a better more accurate handle for it to enable easier raising and lowering?

The jack I am looking at is this one..

All help is appreciated.

How long, exactly is a piece of string?

If you want precision, you can most probably achieve it with a car jack, but it might take a bit more fiddling than one of those posh router lifts. The only real issue I can see with a scissor jack is that there isn't a linear relationship between the number of turns and how high it lifts the router. That said, you'd probably only use it over a small part of its travel, so you can almost count turns or fractions of turns.

I did something similar for a long while with a cheap 1/2" router from B+Q. It was a faff but not a disaster. That said, when I got a Trend T11 (through table height adjustment +/- 0.05mm roughly, and above-table collet spannering*), life got much better. Other routers, including yours, will fit in a router lift, giving you above-table, dial-in height adjustment.

Where it matters is once you start using the router table for joinery, especially the range of router-cut special joints that are available - finger joints, rail and stile sets, mitre lock cutters, and so on. It's also important when you want to combine decorative mouldings, cut accurate housings and rebates. For those you need the height bang-on, and micro-adjustment is a huge time (and temper) saver. I can measure a test piece and adjust to correct my 0.25mm error quickly and correctly.

So it's up to you. I think my router table is probably my second or third most useful object in the workshop, in a tie with my bandsaw after my workbench. For that reason it's worth the cost of a good setup, and I can still just lift the T11 out and use it handheld when I need to - it's a very capable router.

Have a wander round Peter Sefton's site, The Woodworker's Workshop. He's a specialist in router systems, and stocks very high quality stuff. Some will make you suck your teeth at the price, but I bought my current router plate from him and I am very pleased with it. I have no need of a router lift because of the T11, but he sells those too. Even if it's all too pricey you might get good ideas from there.

So on the one hand this, on the other hand that. Have a look to seeif it sparks ideas.

*you have to remove some parts that are only used when it's being hand held such as the plunge depth indicator, but it takes seconds to do that, literally. It's re-configuring more than dismantling.
M

Thank you for the quick reply I have had a look and I know what you mean now about it being expensive!

For completeness I have the following router table : Router Table

Which accommodates my router out of the box and it does fit the T11 router for the functionality you suggest. If I can do the adjustment from above the table that would be fantastic as long as its not going to break the bank and it just slots into place! As I am only a hobbyist and working out of my garage space and money are tight so anything that can help there would be great.

Shot answer would be no and I honestly wouldn't know where to start if i'm honest!
R

I have a triton router maingy used under table and struggle with only having 1 arm re adjustment read this and realised I might be able to remove the springs ( found it only has the one ) removed it and OMG !! so much easier now
O

Years ago I got fed up taking the router out of the table for hand held work so looked for one with its own height screw as router lifts cost a fortune. I have a 1/2'' Ryobi with the springs removed in the table full time. As the others have noted taking out the springs makes things so much easier. I have seen a few people on forums using those jacks so they get the job done. The only problem I can see with one of those is forgetting to undo the height lock and doing some damage as they are designed to lift a couple of tons. There are hundreds of clips of home made router lifts on the net for other ideas.
Regards
John

Some of those router lifts cost more than my car!
The main downside of using a car jack is you have to keep the vents on the end of the router clear, Thats where the air comes in to keep the router cool.
Theres nothing wrong with making your own.
If the router you have comes with through the table adjuster, use it.
My makita came with a long phillips head bolt that I used for a while, till I got fed up with using the screwdriver.
So I replaced it with a 10 mm bolt head, recessed that into the plate and used a 1/4" speed brace to make the adjustments.

After a while I got creative and made an under table lift with a front crank handle out of scrap wood. It's not pretty :roll: , and most of the people here would faint if they saw it, :shock: Total cost of parts was almost a quid, but it has served me perfectly for a couple of years now.
The important thing is to get the cutter bit height correct. I use a simple trend depth gauge.
https://www.trenddirectuk.com/gauge-1
G

I have the Dewalt 625 and use the PlungeBar lifting system from Woodrat for quick height adjustment - and for fine adjustment I use a boxspanner on the height adjusting nut.

I've never understood why people spend a lot of money on this problem. A frame under the router with a screw thread pushing a pad up on the underside of the router and it is solved. Both my router tables have a variation on this, one made of wood, and the other of steel. Here is the steel on. My table hinges off the front of my RAS bench, so a couple of photos show the table in its raised position.

Here is the frame hinged out of the way to allow access to the router: 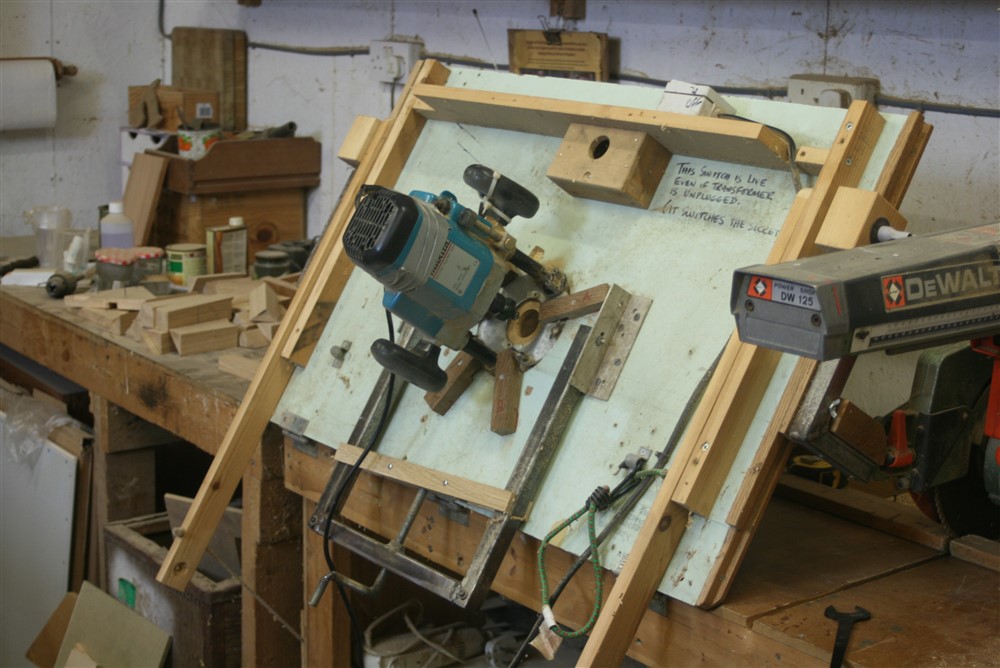 Here it is raised, and ready to adjust the router height. The knob on the end of the crank fell off just before I took the photo: 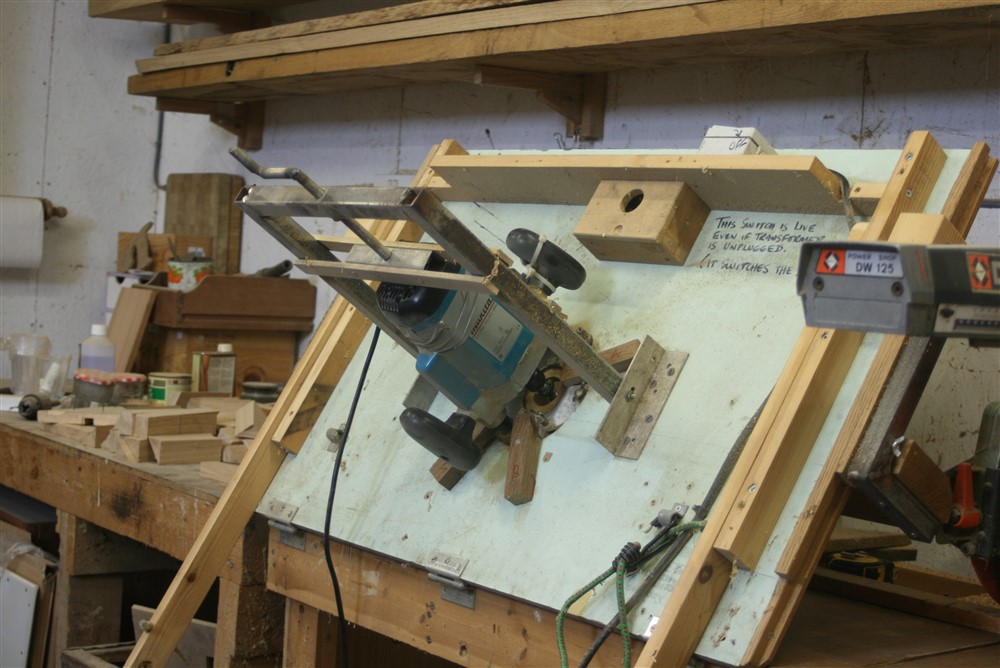 Finally, with the table in position you can just see the frame under the router: 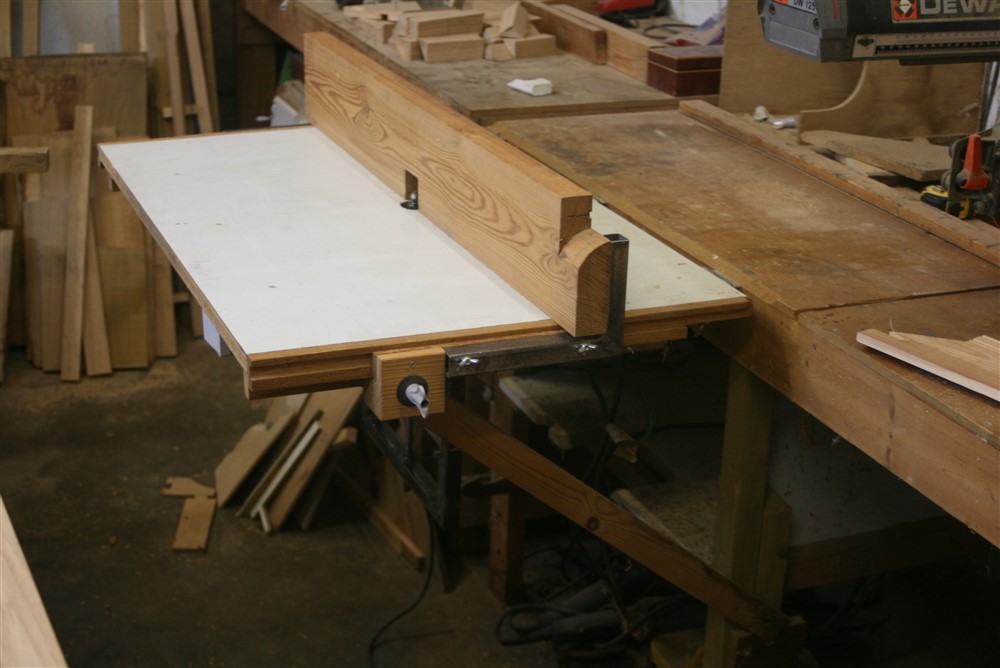 That looks crude, but it produces amazing accuracy and control. You simply turn the handle to raise or lower the cutter, then lock the router into position with its own plunge lock thingy. If you don't have the kit to make one out of steel, my wooden one has lasted over 30 years so far. I don't have photos of that unfortunately. Both are made from scrap and cost literally nothing.
D

Hello.
I buy DW 625 with this bolt accesory. I also add hex bolt on end for power lift by drill.

Its for setup height, easiest solution for routertable. Maybe you could add similar part to yours?
https://www.sautershop.com/router-acces ... justments/ 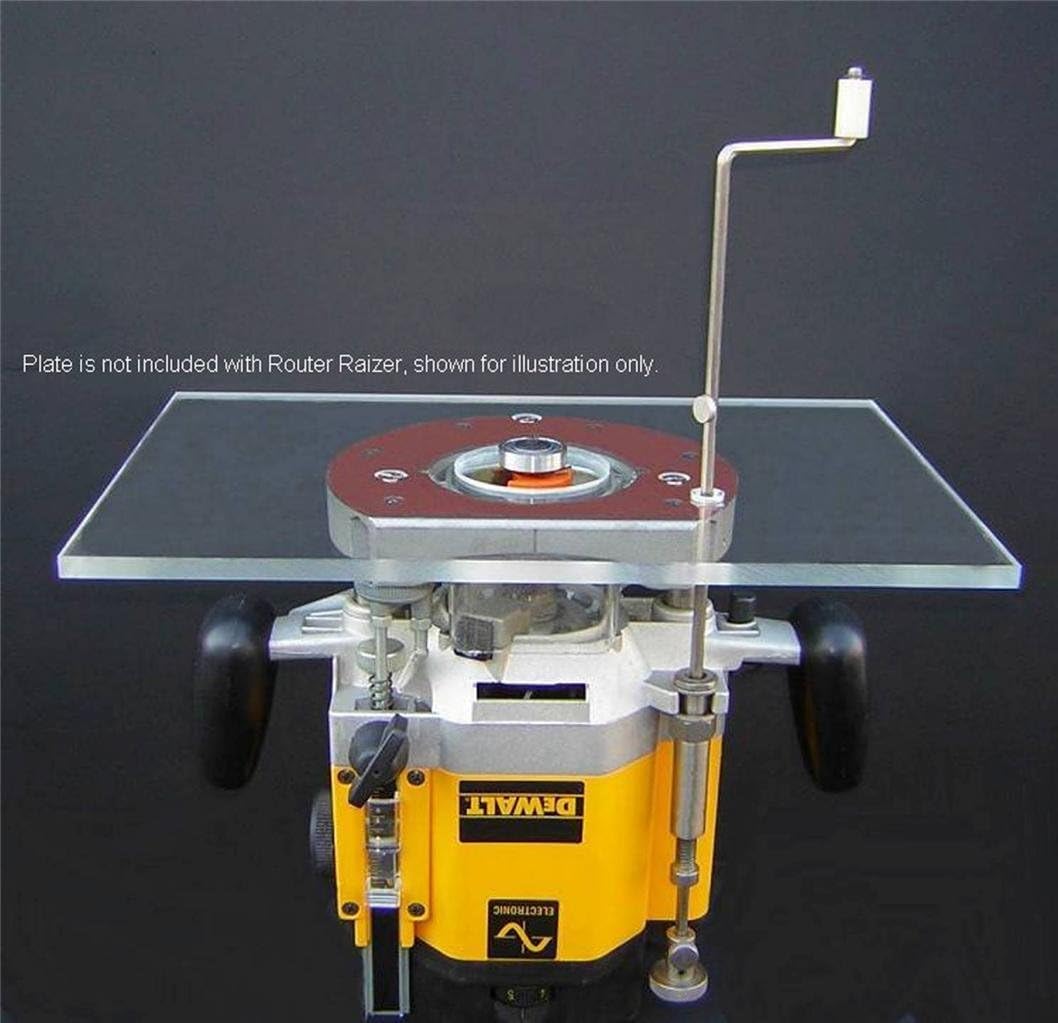 Thank you all for your suggestions I have been looking around for means and way of doing this and stared at the router table in the garage and the scissor lift idea may not bee fee sable as the router tables frame seems to be in the way. So the bar used to raise and lower would not pass through this.

Further looking into this I have found these: Scissor Platform which seem quite good. Bearing in mind the comments around ventilation I was thinking maybe one of these with some wood on top with sides where the router sits and the router is raised up? If that makes sense?

What are peoples thoughts on this?

Whatever works for you. There are a few utube videos on the subject.

You own a good router table with a top-adjustment hole, and a decent router that fits the table, but can’t be adjusted from the top. My advice would be:
1) Get a Trend T11 or Dewalt DW625 that fits the table and can be adjusted from the top (if you have the funds spare).
2) If no spare money, the modify your current router for to adjustment in the table (you will need to drill a hole in the base at least)
3) As per Dominik’s suggestion, use a bottom-fine adjust that fits your router.
4) Keep the router, but build a new lift around it.
D

MikeG.":2cotdhmz said:
Here is the frame hinged out of the way to allow access to the router:

Hey years ago I have similar router. It have own lift system like DW 625
This chimney stuff. You have plug in that place. I think is this same model so should have this same attachment.
Is nice because screw is hidden inside plunge rail/pipe(?)
Why you don't use that? 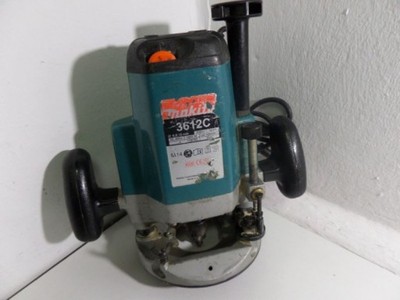 Because I've got a perfectly good system of my own. And because I don't want another hole through my table.