I have stumbled across this community in search of some advice. I am looking to recreate the below effect at home. 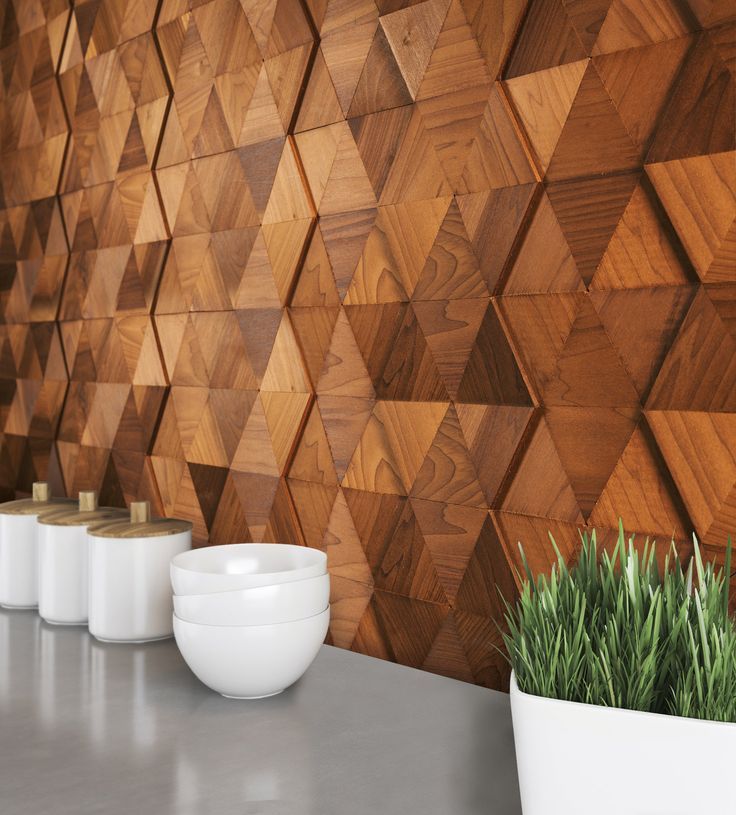 I have already made a prototype as such see from pallet wood.

The area I need to cover is quite large at 12.42m^2 which having worked out the maths i would need 165 hexagons or around a 1000 triangles.

I am asking for ideas for cheap ways of sourcing the wood or making it easier to produce the pieces. I have a trusty chop saw and a handsaw.

Just be honest and tell me I’m crazy for even thinking of doing this! :shock:

A picture of the prototype

Another source could be parquertry flooring. You may not get that exact hex pattern but there are many designs. Sad fact is good wood costs money so I cant point you on the cost effective path.
Another point to think about is the weight so you may need to replace the plasterboard with ply or something.
Regards
John

Youre right, youre crazy for thinking of doing that. :roll: :lol:

Pallet wood is the "IN" thing. But its rubbish wood and is often smothered in dangerous chemicals.

Making all that in any other wood is going to be expensive, and unbelievably time consuming. If you only have a mitre saw and handsaw, think in terms of weeks of work and immense waste.

I think you could make it easier by using veneer, or even a thin veneered piece of ply/mdf cut up to triangles and glued onto a backing board such as mdf. You have plenty of options to screw/glue the backing board to the wall and then cover the screws with the triangles so they're hidden. You'd probably want to rip the veneered board into strips then cut the strips into triangles with some kind of stop block on the mitre saw.

Pallet wood is rubbish, of unknown species and moisture content, and if you try and make it from that you'll have a disaster on your hands. Even with the very best seasoned timber this is a daunting project, and there would be some serious skills involved (planing, for instance)........and you'd still get gaps and cracking. Timber shrinks and expands across its width so all of the hexagons would be expanding as the humidity level increased. In normal timber paneling there is allowance for such movement, but there is no way of hiding it here.

As for cheap timber......there's no such thing unless you pull it out of a skip or get it on Freecycle.

I'm afraid that my unequivocal advice to you is to forget the whole idea. It simply won't work.
R

If you want to do the project though and cost isn't an issue then go for it. What will keep costs down is to go for the thinnest material you can. It will fixed to the wall so you don't need it to be very strong.

Depending on the look you are going for then plywood might be a good choice. You could get it CNC cut for speed and accuracy. It is still going to be an expensive job but nothing wrong with doing it.

For fitting you will want to re-board the surface of the wall as I doubt it will be flat enough in it's current state.
T

Don't be told that it wont work. I rather like the mock up that you have made.
When people tell you that it will move etc etc, yes, it probably would (all solid timber does to a greater or lesser extent) but it certainly will not be a disaster if you either design the issue of movement out or you simply accept it. It would be possible to accommodate movement by having some parts 'floating' above or below the surface or actually incorporating gaps into the design in the first place. Or perhaps as has been mentioned, use plywood for some parts and/or plant your patchwork on top in smaller areas... this would also reduce the amount of work. Whichever way, I'm sure you could achieve an interesting effect.
S

I quite like the opening picture. Where did it come from?
The grain direction doesn't seem to be organised in any particular order. Does this suggest it is veneered over a stable substrate?
D

A few sheets of veneered MDF and a tracksaw would be a good starting point.
H

The only sensible way to do that would be to use an engineered wood approach.
Is i the grain variation or the colour variation you want.
If its colour I would go for a baltic birch ply and then stain different segments. 8 X 4 sheet about £30 dependent upon thickness
If its grain then go for a fairly variable grain like ash on MDF or birch ply and then stain pieces to suit 8 x 4 sheet about £75 dependent upon thickness
Dont buy cheap single sided products as they always bow and seal both sided and edges
Cheap pallet wood, you might as well just put it straight on the fire and miss out the markin, cutting, finishing staining etc you have to value your time
Ian
L

Wooly, have you thought of using laminate flooring?
D

To go with the track saw I suggested how about an isometric MFT top, you see Peter using it to cut hexagons from about 15 mins in.

Thank you guys for all your ideas it’s really given me some food for thought and some avenues to pursue. I think I will have to hold my hands up and accept I have bitten off more than I can chew in maybe creating the whole effect. I have scaled back the size and scope of the project but still using the hexagon shapes. In response to samhay it was a picture from Pinterest that gave me the initial idea but sadly supplied by an American company.
S

Might be a bit tricky to ask them for a sample then.
Perhaps something to aspire to in the future.

A slightly more helpful answer would be veneer, lots of it

Kind of depends where you live. If there are sawmills around they will cut wood for different grades and uses so as they work through the trees they will end up with material they cut for pallet makers. That wood will all be of similar thickness and widths. They bundle them into lifts and sell them. They may or may not kiln dry them. If you can locate a sawmill they may sell you some. A pallet company might too. That would give you a lot of wood that you can play with and you can choose to keep the flaws, knots, or cut around them. I used to drive by a pallet company and they had a yard as big as a soccer/football field full of stacks of wood that came in on the trucks. The trucks would leave with the finished pallets.

I'm just curios that so many people are saying it won't work and do not do it.

The subject wall is up, seems to be holding, looks fantastic. It up and done. What's the problem then.??
H

I dont follow your comment beech.
Only 2 people have unequivocally said dont do it. All other comments have pointed out the issues with using pallet wood and suggested more appropriate materials.
Understanding timber quality and movement issues is absolutely critical to getting a piece to function and not fall/pull itself to pieces.
I suggested ply with a total cost of about £100 for the project, bearing in mind that this could take a lot of time to do , then saving say £50 on materials and ending up with something that doesnt live up to expectations can be both demoralising and a lesson learnt the hard way.
Go for it but listen to the advice
Ian
P

The subject wall is up, seems to be holding, looks fantastic. It up and done. What's the problem then.??
Click to expand...

I haven't (yet) said "don't do it (at least in solid wood)", but I would do so. The reasons are (a) that if in solid wood, all the joints are end grain to end grain and so very weak, and (b) the way each triangular part will expand and contract with humidity changes will surely pull the thing apart and leave gaping seams.

That would be true with high quality, well-seasoned timber, let alone pallet wood.

I made this instrument with joints just like those of the wall, but (a) mine has a spruce sub-frame along which each joint is glued, and (b) the back has a slight dome to it, enough that expansion and contraction will raise or lower the dome rather than pulling it apart (thus the spruce, it's springy and will move too). Even so, I doubt it will survive 20 years, though it's managed its first year. 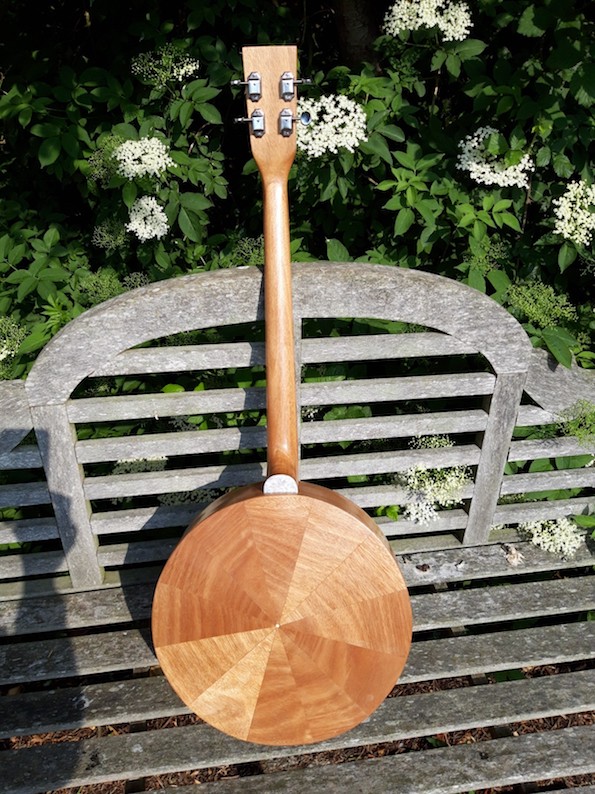 Veneer on a stable substrate would work, and my guess is that's how the original was made - if you look at the joins between the panels the edges are chamfered, and in some places you can see that the wood revealed by the chamfer is not the same as the face wood.

B
For Sale Axminster AC216 Table Saw 8" plus extras