A friend has inherited his father's multiplane which was bought when he retired in 1967. Finding what it is worth now is fairly straight forward but he is curious to know what his father would have paid for it when new.
Also there appears to be a significant demand for these planes now on auction sites. Do people buy them to use or are they collectors items?

I use mine all the time. Especially if I have less than 10m of beading/fluting etc to do rather than set up the router and it is nice and quiet
A

It shouldn't be difficult to look up. I would expect it to be in the £12 to £15 range at a guess.
In 1967 Retail Price Maintenance was not illegal, so the manufacturers usually set the retail price.

It's worth remembering that a week's wages at that time for a skilled man was about £20 to £25 for a 48 hour week. That was decent money. Harold Wilson was sharing Downing Street with the unions and the Beatles were still in the charts. You could get a pint of beer and a packet of fags with change from two bob.

To give you an idea, I came out of my apprenticeship in the late '60s and earned 12 shillings an hour. The older guys earned 12/-6d. This was in refrigeration engineering - a bit of a specialised racket in those days.
To put a scale on this, wire-strangling electricians working on the same firm typically earned about 9d to 1/- an hour less.
Last edited: 10 Nov 2020 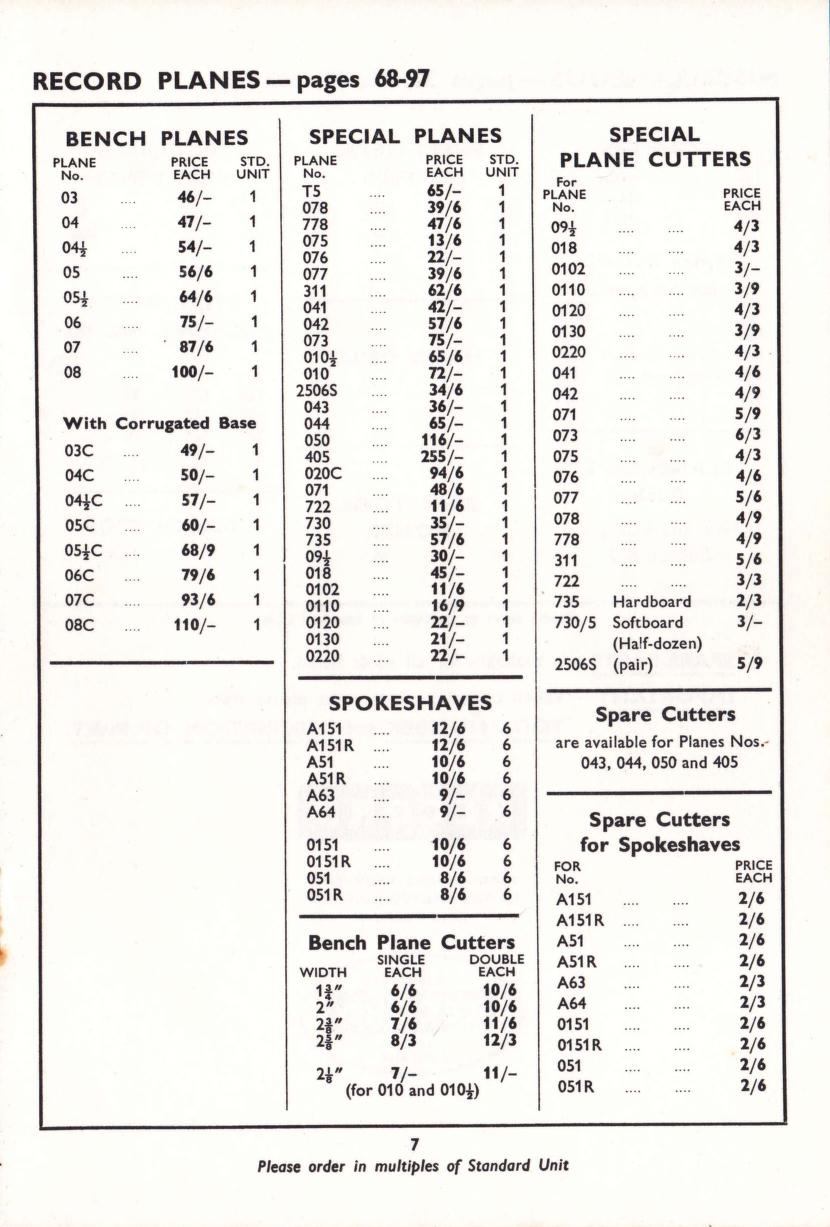 As Argus said, retail price maintenance was in force then, so the price printed on the catalogue would have been what the customer was charged. (The tool shop would have paid a wholesale price, expressed as a discount off this retail price, set according to their level of business.)

You can see the accompanying illustrated booklet here:

As to who buys them, well, there certainly are people who collect everything that Record made (an easier target than trying to find one of everything from Stanley) but prices don't seem to have become excessive. I reckon the 405 is a good solid, well-designed plane. They are probably easier for us to find than the equivalent Stanley 45 and my impression is that they were still being commonly bought by tradesmen in the post-war period but were not out of reach of serious amateurs as well.

Very strange to express prices just in shillings rather than using pounds or guineas?

It’s not always a direct comparison either, as what was expensive and cheap has changed too, for instance as said cigarettes and alcohol were cheap, food was expensive (and went off fast, for most). It’s the other way around now.

Tools were expensive then as you can see, half a week’s wages back then would buy you a nice hand tool, now you could buy a half decent router and a set of bits which is an order of magnitude more complex than the old tool but is a similar price now

As Andy mentioned, but I had forgotten, there was the issue of Purchase Tax.

5% doesn't seem much nowadays and it was non-cumulative though replaced by VAT later on in 1973 at a higher rate. I think that some times it was included in the cost, sometimes not and I can't remember what the rules were.

Compared 47 shillings, for a number 4 plane listed on the same page it was an expensive piece of kit. I can recall a Wolfe electric drill coming in at around £4 about that time and it only had a 1/4 inch chuck!

As a lad in school, the woodwork teacher had an old sit-up-and-beg desk which he hid behind. On the wall behind all that was a glass case containing the display of special tools which only came out on high days and holidays..... a plough plane (I don't think that it was a 45/405, probably a No: 44), mortise gauges, some posh chisels etc. all nicely polished.

We think that 'old money' is quaint now...... but it had its charms.
When it went west in 1971 we also lost a lot of old terminology. We could buy a Mars bar for a tanner, an old Bob would get you into the pictures, one-'an-a-tanner would buy a couple of pints, two-'n-six or half a dollar...... In the fifty years since we still say 'pence' or 'P'.

AJB Temple said:
Very strange to express prices just in shillings rather than using pounds or guineas?
Click to expand...

Yes, but surprisingly common back then. I've just been looking at the 1953 Buck and Hickman, which does the same thing. I don't think there was a simple cut-off point, with prices under £5 in shillings for example. But if a range of items started at less than a pound, like say a radiator valve at 11/9 for the ½" size and went up to over a pound, then the bigger sizes stayed in shillings (up to 62s for the 2").

Conversely, something where the cheapest size was over a pound was priced in pounds and shillings throughout. (Eg the "Buffalo Ejector" was £1 15s for the smallest and £17 for the largest.)

I think the Record price list was following a similar convention but looking at the whole range rather than a lot of separate tables.

I took the 5% to be an across the board price increase. This was a common enough practice, easier and cheaper than re-setting the whole list (manually) for a revised edition.

Wikipedia suggests a higher rate of 33⅓% for Purchase Tax.

History of taxation in the United Kingdom - Wikipedia

I can't see a previous reference to Purchase Tax in this thread so think it might be pertinent to point out that P/T was charged on the Wholesale cost of the product and there were a vast number of rates, often dependent upon what the final product was to be used for --- a veritable nightmare to operate. The change to V.A.T. made accounting a breeze!
S

Many, many thanks to everyone who took the time to reply in such detail. I will pass the info on to my friend to help him decide what to do with his plane.
Unfortunately I could not make any use of it but it would be such a shame if it is put away again for another 50 years.

Getting hold of war records/postings