Went to work on some kiln dried sawn european oak that has been sitting in the workshop for the last year and saw some holes in the sap wood in a couple of the planks. Cut off the offending strips and gave it a whack and some small live beetles fell out. I've indentified them as powder post beetle.

Question is, is the oak that I have in the workshop now contaminated and not fit for sale or can I do something about it?

Fortunately there isn't a huge amount of timber in there at the moment but it is still not ideal to have to throw out what looks like perfectly good timber.

Just don't use the sapwood.

If you're really worried, let me know how much timber there is and the sizes, as I might take it off you.
Last edited: 22 Jun 2021

Cut off the infected part, treat the rest and check anything it’s been near
R

Thank you, good to know it just infects sap wood but still very irritating as it was next to my well stocked odds bin. Re treatment internet says borate but can't seem to find it sold in the UK. Can you recommend a product?

No, I would just cut off the sapwood and try to interrupt the reproduction cycle by moving it somewhere very dry afterwards.

They go after the starch and sapwood has a high starch content, so once that's gone the females probably won't be interested in it.

I take a pragmatic approach with European oak, as the heartwood doesn't accept treatments very well because the cells are blocked by tyloses and I never use the sapwood for anything other than burning.

Oh, and when you re-stack it make sure the stickers are made without sapwood too.
Last edited: 23 Jun 2021
R

Yes I think I've read every article on PPB on the internet this evening.

I was thinking once sapwood is cut away and it's been planed on all sides it would be ok as the eggs can't be that deep in the timber?

I've not read of anyone having powder post beetles in UK before.
I doubt they're as much an issue as common furniture beetle, the most prolific ones below, which look like these but often at least 50% smaller or 50% larger, like the big brown ones below.
Biggest one I've ever seen.
I'd be looking out for flight holes, or what look like campers sleeping bags in crevices if your worried, as you might have them already.

Cut off the sap and keep an eye on things.
All the best 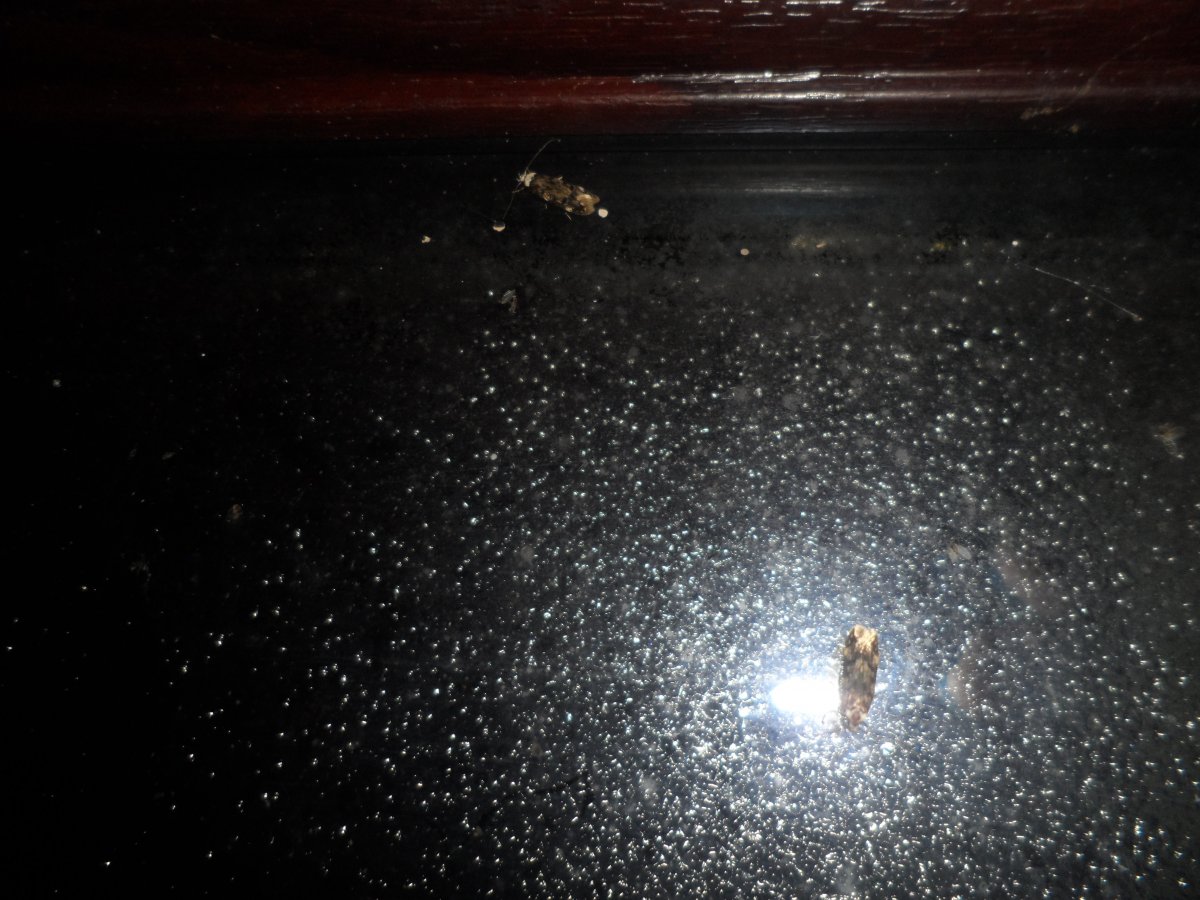 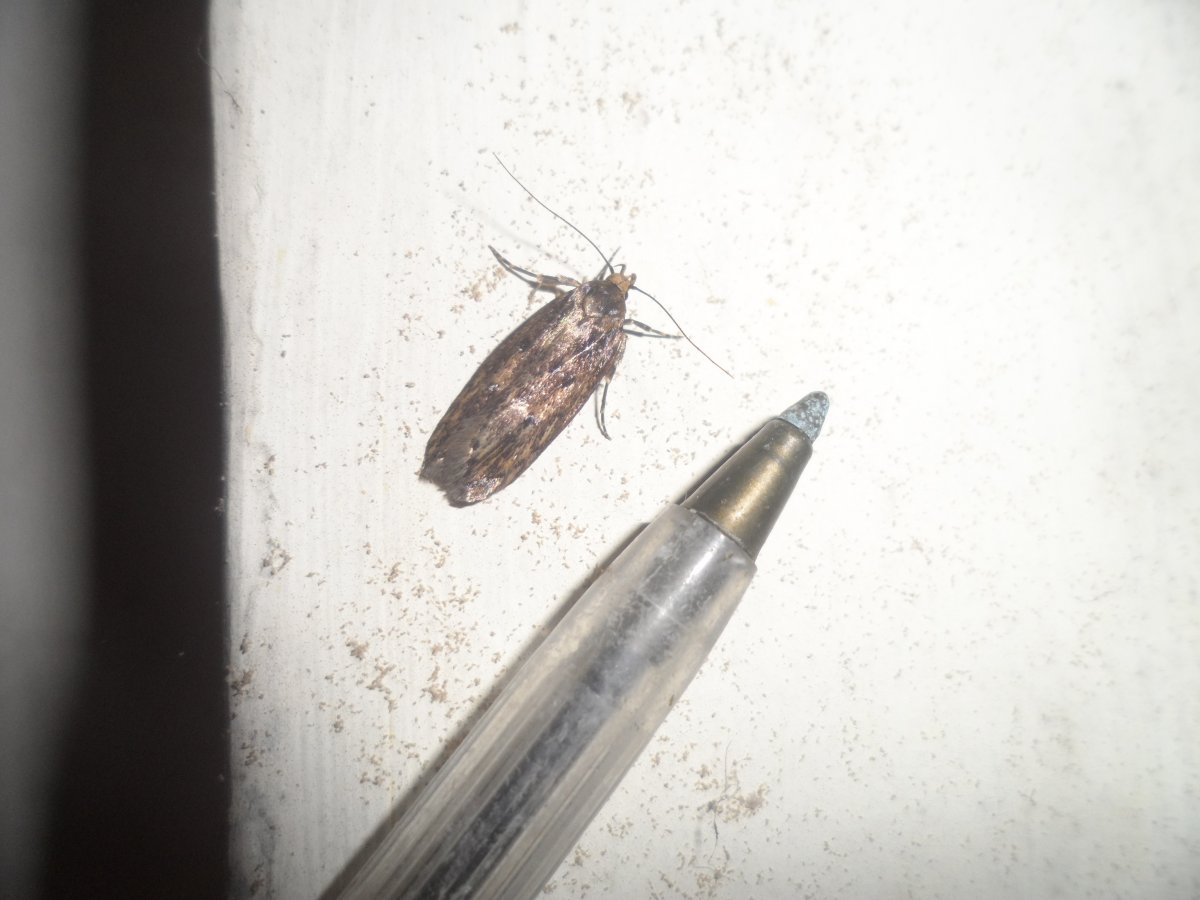 Renoj said:
Yes I think I've read every article on PPB on the internet this evening.

I was thinking once sapwood is cut away and it's been planed on all sides it would be ok as the eggs can't be that deep in the timber?
Click to expand...

Britain has a native one Lyctus linearis, the others were supposed to have been imported from America after WW1.

You'll probably be OK with removing the sapwood and making sure you've got the timber in a dry, well ventilated place.

I don't know what bugs you've got and they're not easy to identify, but oak heartwood is generally resistant to insect attack unless it's been subject to fungal decay beforehand. Long horn beetle cause a bit of a problem for me if I leave a stack of unprocessed oak logs outside for a year or two and they make whopping great holes.

If you get some of the dust from a hole and rub it together with your fingers it should tell you what you have.

I'll take a photo of a board with Longhorn beetle attack in it for your amusement later. I did have a very large log with pinhole borer in it and that went deep into the heartwood, but they are generally thought of as a sawmill/forest problem.

There's no need to freak out about it though, but you might want to check all your timber and tidy up a bit.
Last edited: 23 Jun 2021
R

Thank you, it's reassuring to know it's not a major issue.

Yes, very fine powder and this is a picture of one of them. Looks like a ppb from my day of research. 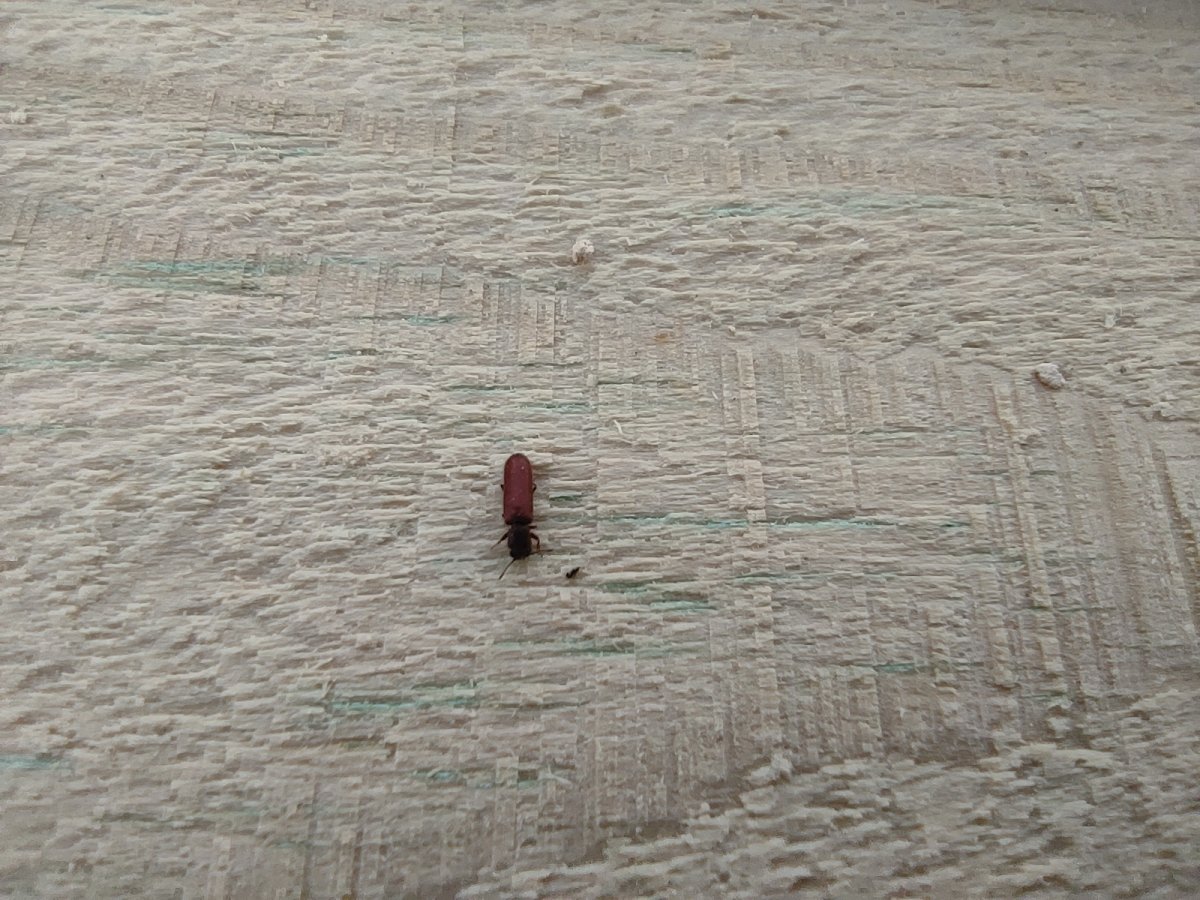 Here's one of my bug problems.....Longhorn beetle 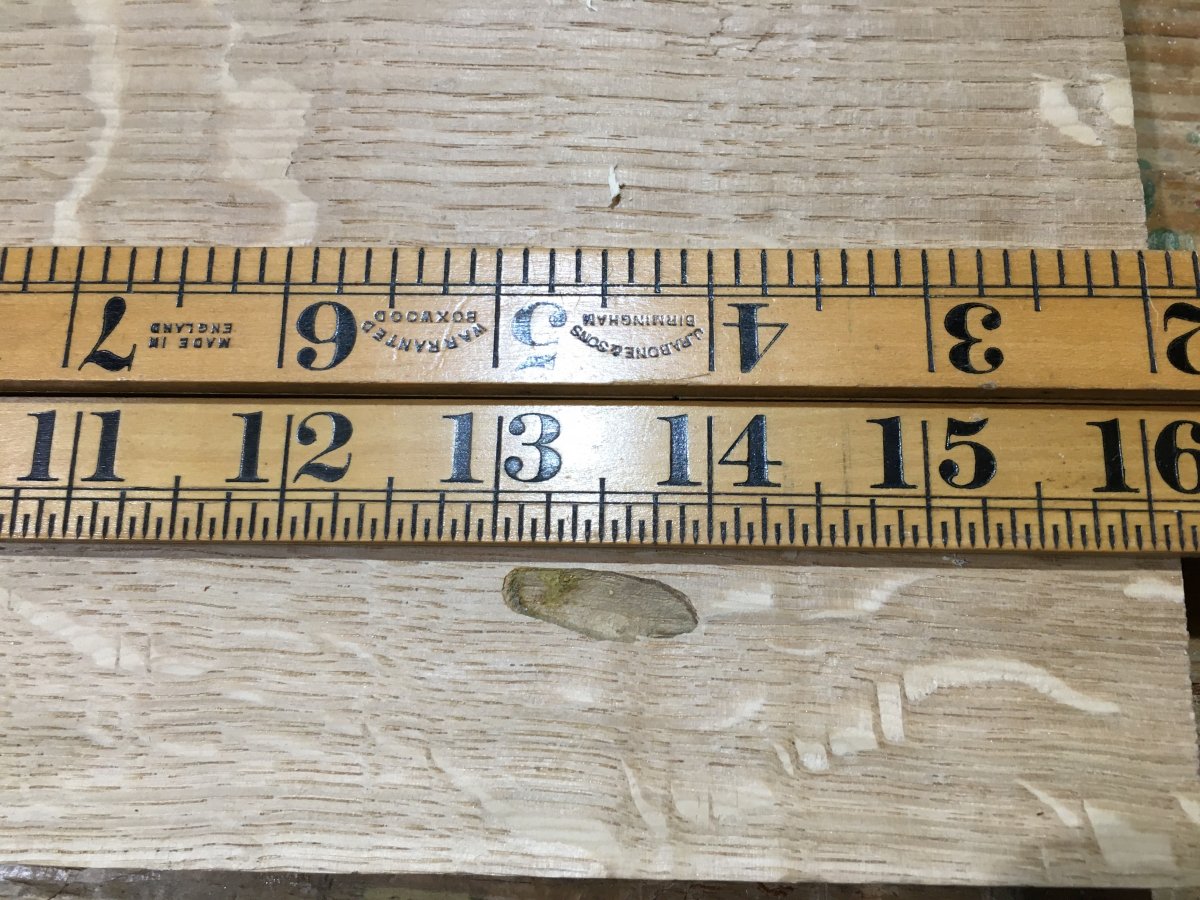 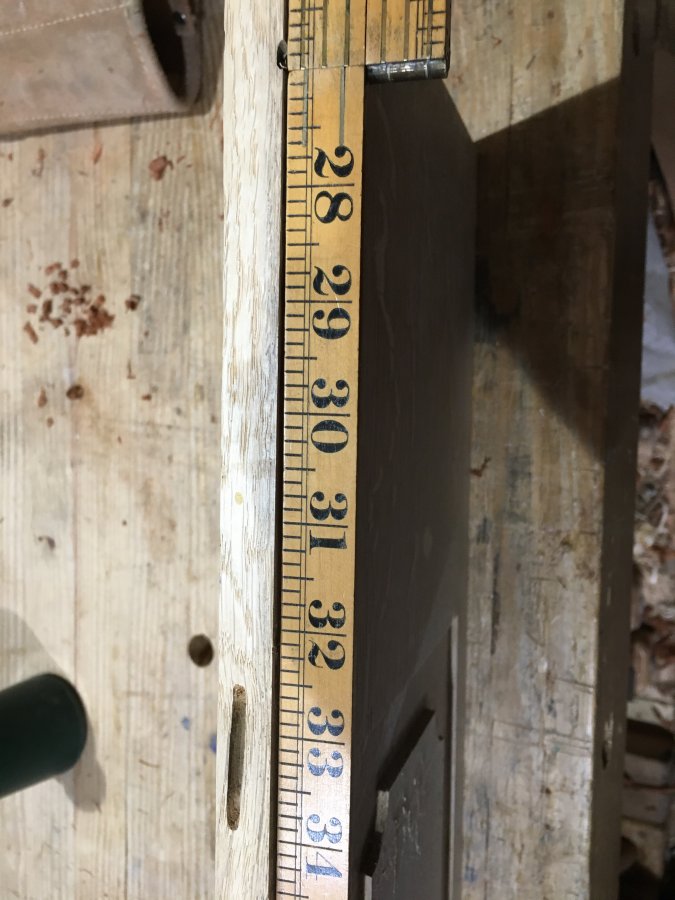 I managed to keep it in the rebate (bottom right) and it didn't affect the front of the panel. 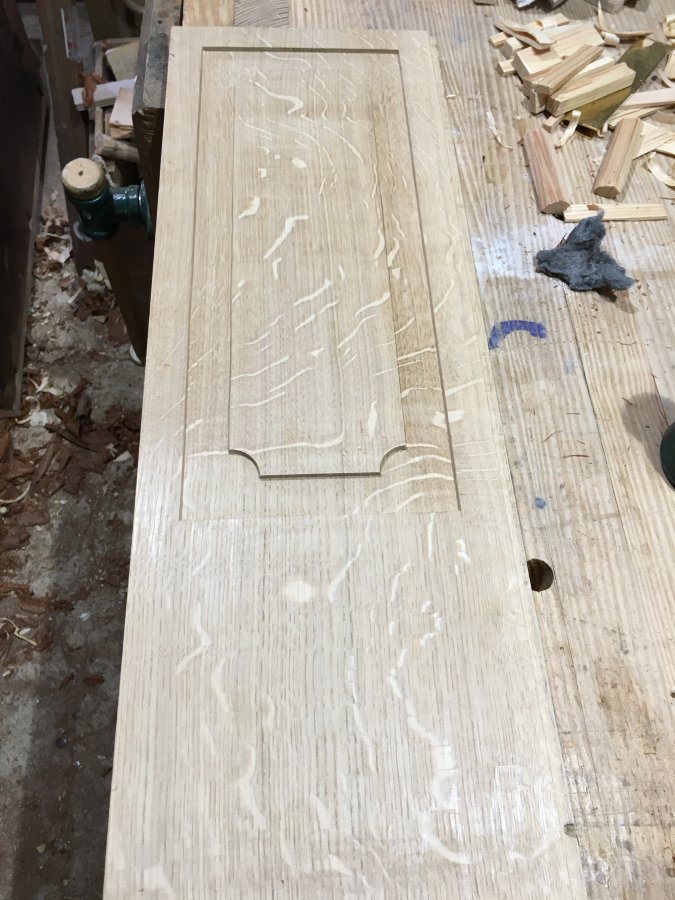 The trouble is is that kiln drying fixes the starch in the parenchyma cells (the rays), whereas during air drying the ray cells remain alive and remove most of the starch within them through respiration.

So you'll need to do your housekeeping soon and get the sapwood out of your shop. I'm not sure when their reproductive cycle begins, but it's probably in the early summer months. Maybe you could find out and post it here for future reference.
R

This site seems to be the most succinct explanation I could find. Copy and paste of the main bits below. 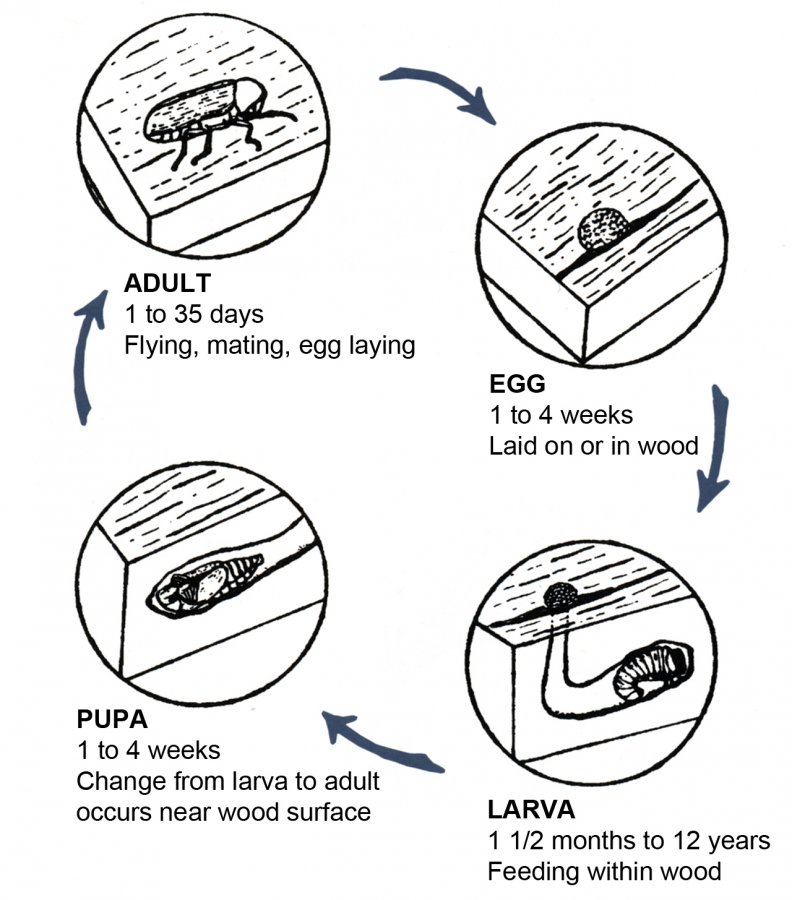 Powderpost beetles are small (about 1/12 to 1/5 inch long) and usually reddish-brown to nearly black. They emerge from infested wood from late winter through early summer. During this time, the females lay eggs in the wood pores. These eggs hatch into tiny curved grubs that eat into the wood, packing their burrows with the finely pulverized wood. When fully grown, the grubs go through a pupal stage and once again emerge as beetles. Powderpost beetles require from a few months to several years to complete one generation, depending on the species and the starch content of the wood.

Powderpost beetles destroy wood in buildings. This bulletin will help you to identify infestations and how to control these pests.