Amazon in the end. I tried looking for them on Erzgebirgische Volkskunst & Spielzeug im Erzgebirge Shop kaufen as recommended by Colwin Way but my german's not up to it yet
So Teelichthalter Messing 40mm flach - Teelicht Tülle für Standard Teelichtkerzen, Größe:50er Set: Amazon.de: Alle Produkte for the cups (and Flammenloses LED Kerzen, BAONUOR 24 LED Teelichter flackernde Tealights, warmweiß, CR2032 batteriebetriebene Kerzen für Hochzeit, Weihnachten, Ostern, Party usw. [Energieklasse A++]: Amazon.de: Beleuchtung for the LED tealights because I want to try doing inside-out turned holders at some stage)
G

OH has been struggling with a bad back due to being stuck at a desk all day on google classrooms when she's used to standing so I threw together a sanding desk for her out of some Spare ply I had from a previous project. Not pretty and in need of a sand especially a the round over bit I used on the edges is getting a little blunt so was burning a bit. 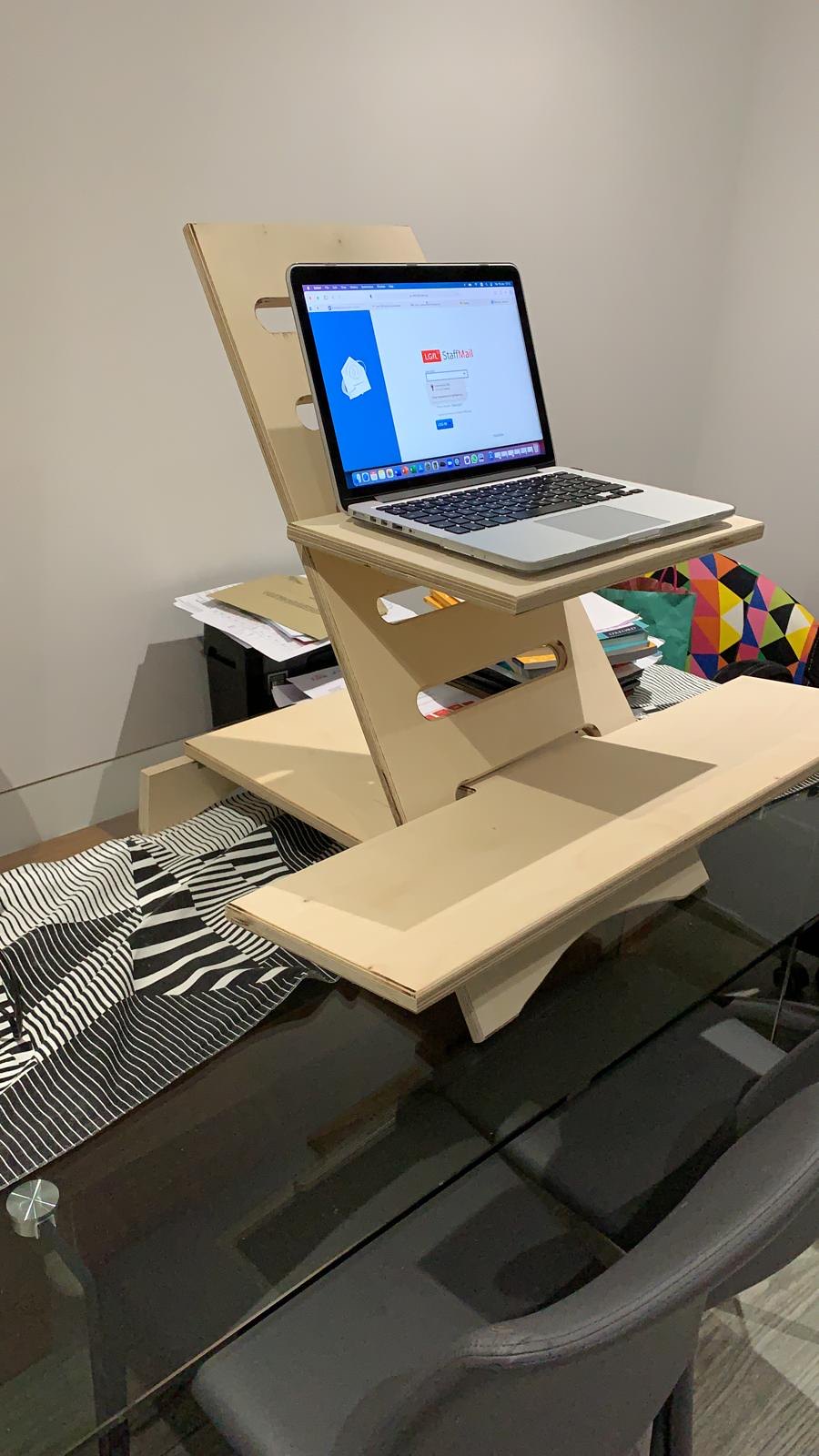 Another file steel chisel, and a stainless (Aeb-l) plane iron. Aeb-l is a super cheap stainless that is fine grained and sharpens like a carbon steel but wears longer and more evenly than a2. The stainless iron should really be commercially heat treated, but I've come up with a way to make it decent in the open atmosphere with two mapp torches and a small forge. The crux is that it's ingot steel so to be heat treated properly, it needs to be soaked around 1900 degrees F for 10 minutes to get the chromium in solution. Ingot/cast steels don't have those bits dispersed very evenly without the soak and unlike PMs, if you just heat it and quench it, it'll be hard, but lots of large bits left in it not dissolved in will just chip. With a micro PM (like XHP/V11), you can just get to 1900F (really even less than that) and freeze the bits in the steel in place quickly and the iron will still be very fine grained.

The difference between the two? AEB-L costs about 1/5th as much. If commercially treated, it has the potential to make a finer grained iron than V11 and wear almost as long, but be sharpenable on oilstones.

Stainless generally costs more to make than carbon steels, but because this type is widely made for knives and commercial razor blades, it's made in large amounts and is cheap ($6 of steel in the blade shown, and about that much again in materials and gas to make the iron. Commercial heat treat with freezer time before tempering here, or cryo, costs about $60, which makes the whole equation undude unless you have a really large batch and a buyer. I've got zero interest in that, but am trying to convince LN that they should look at this as a plane iron steel).

I'll eventually clean the scale off of both of these - it's mostly cooked quench oil.

My latest project (actually first for almost 7 years since i last used a lathe/did any wood working other than house joinery).

Some oak napkin rings and some kiat mini cheeseboards.
They are all slightly unique which i maintain adds to the character lol. 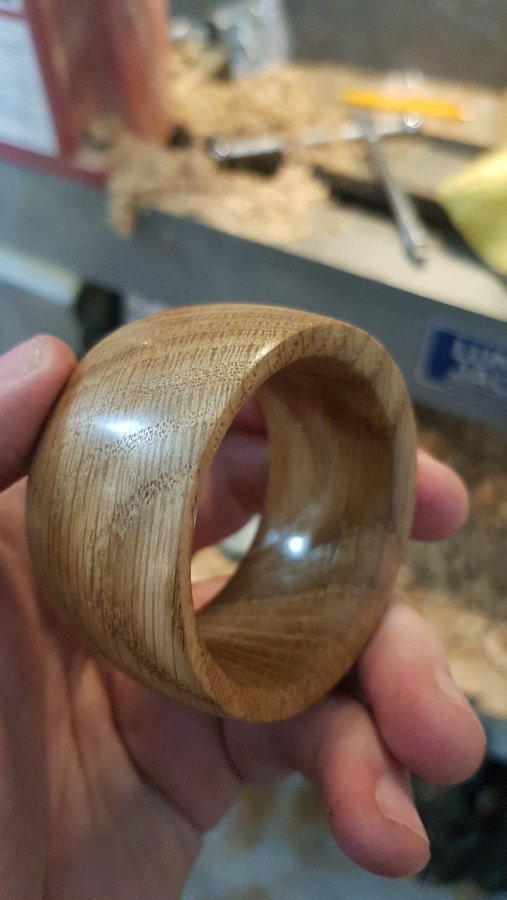 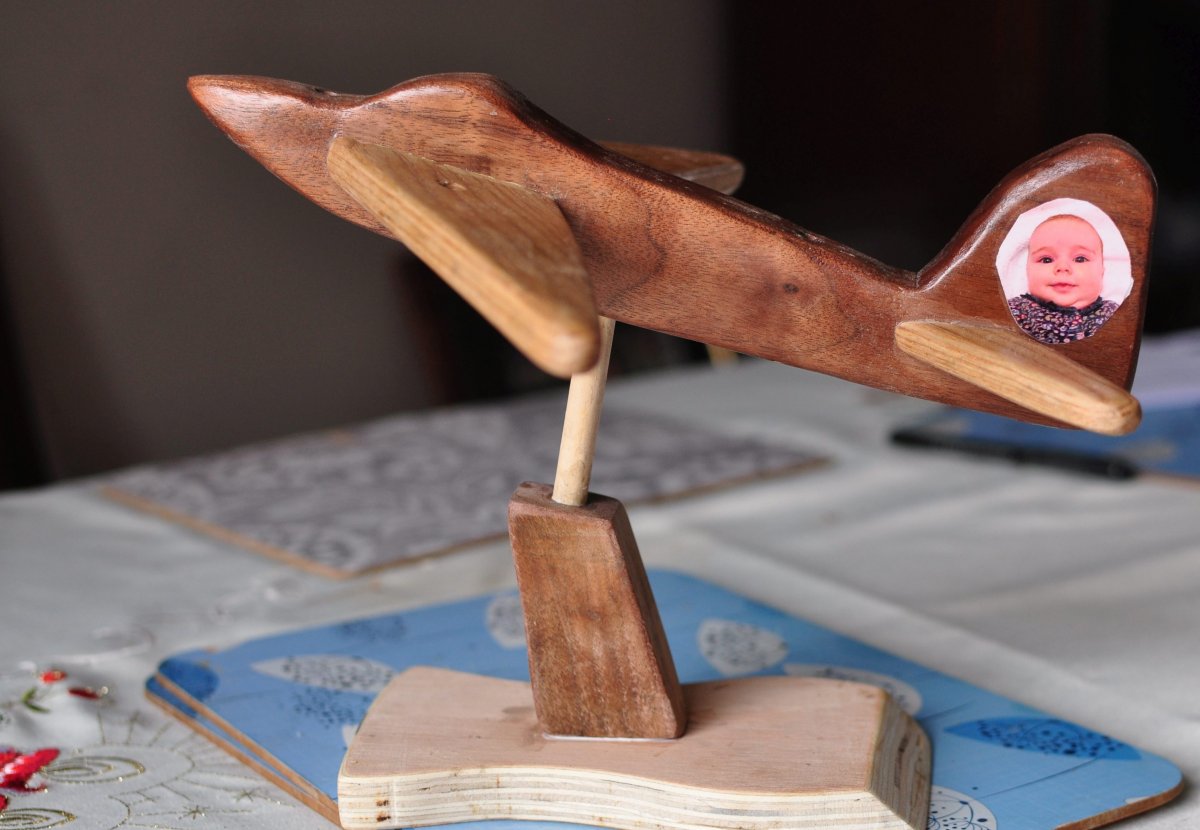 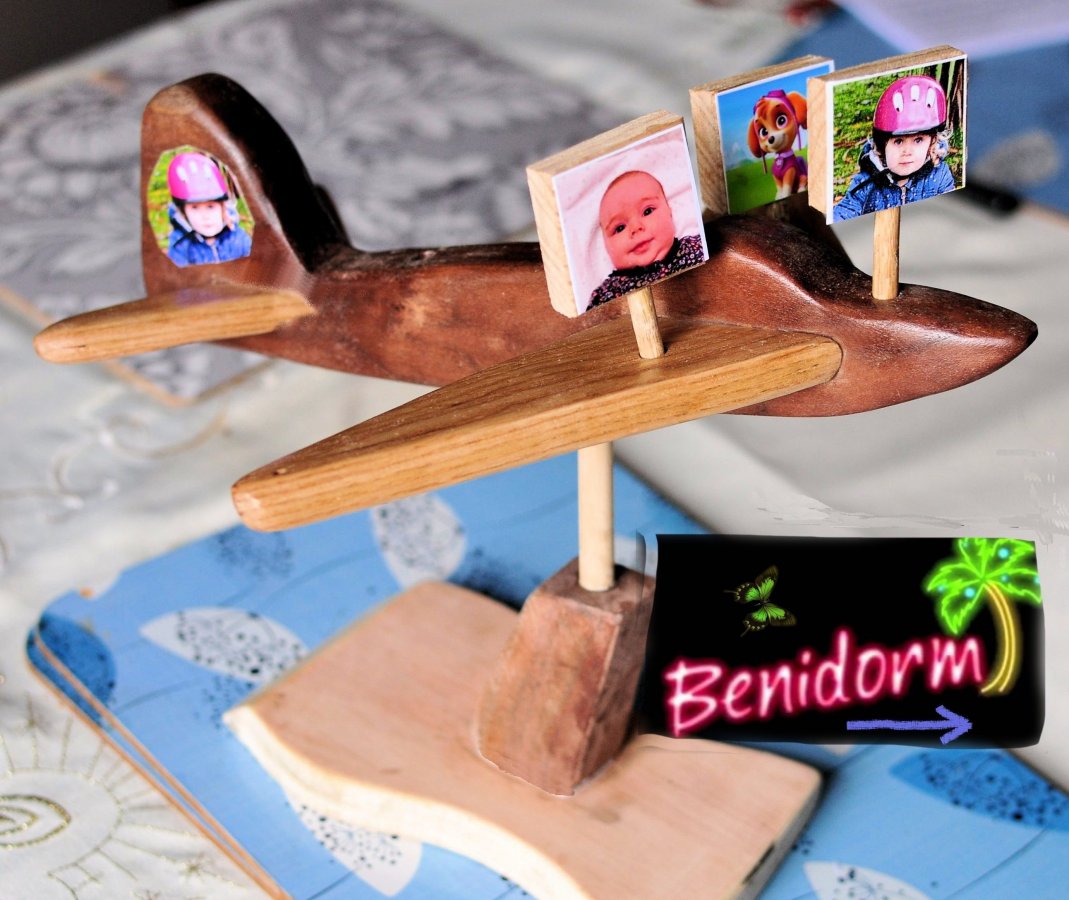 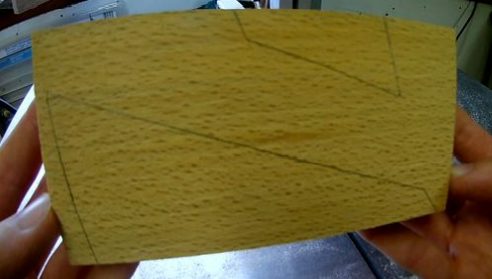 I'd never tried making a box before and I figured it would be good to have a go and use the project as an opportunity to practise hand tool woodworkery. No designs were involved in the making of this box: I just made it up as I went along in a rather haphazard way! 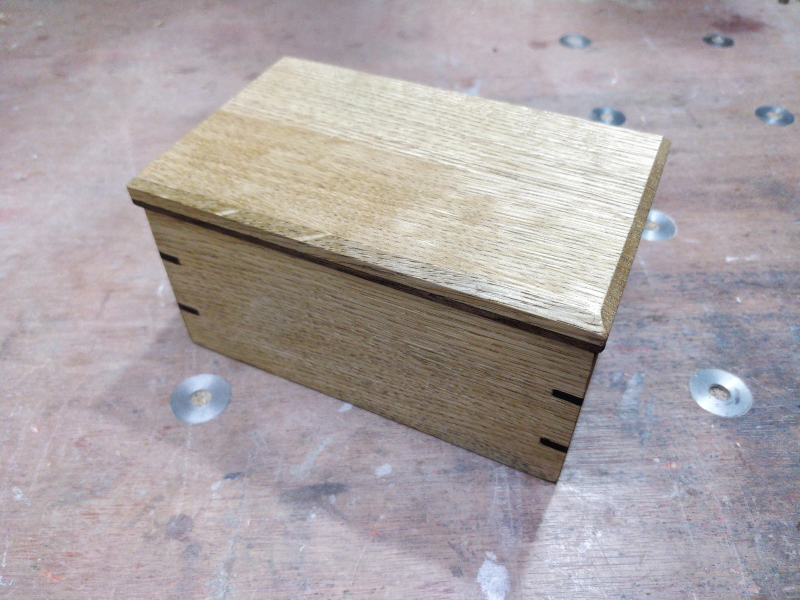 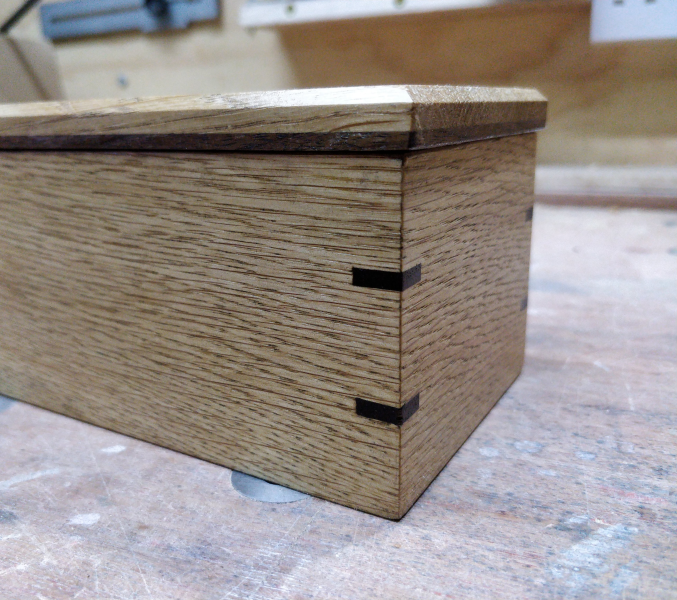 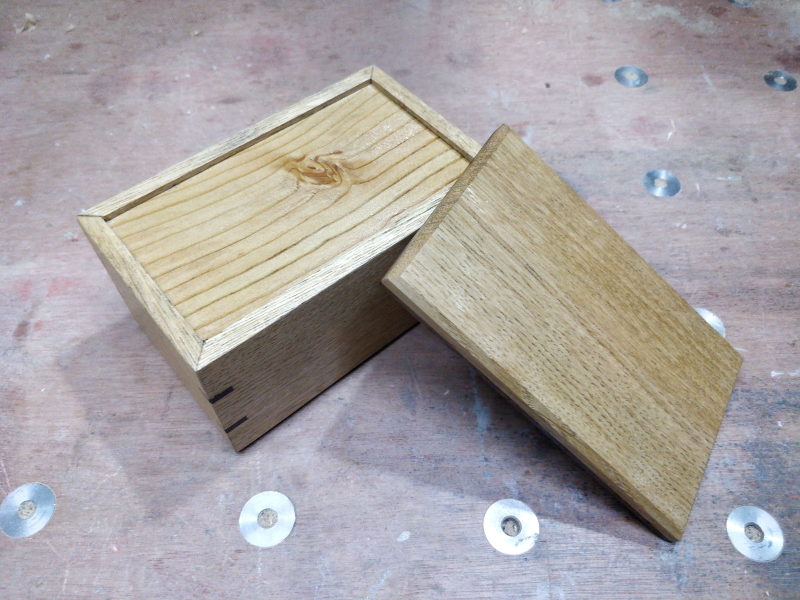 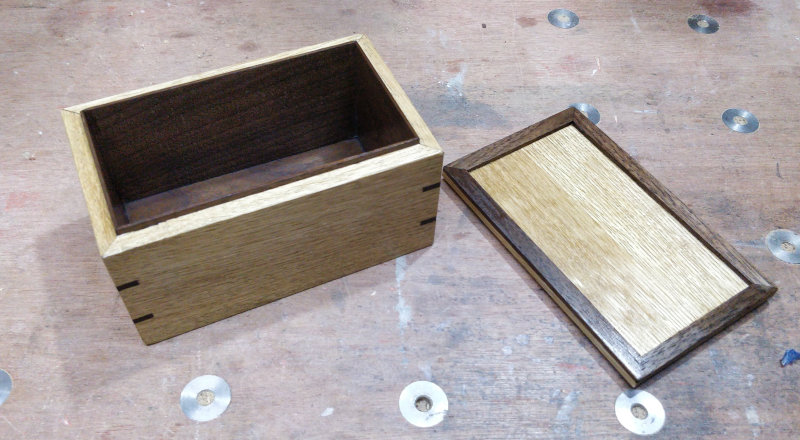 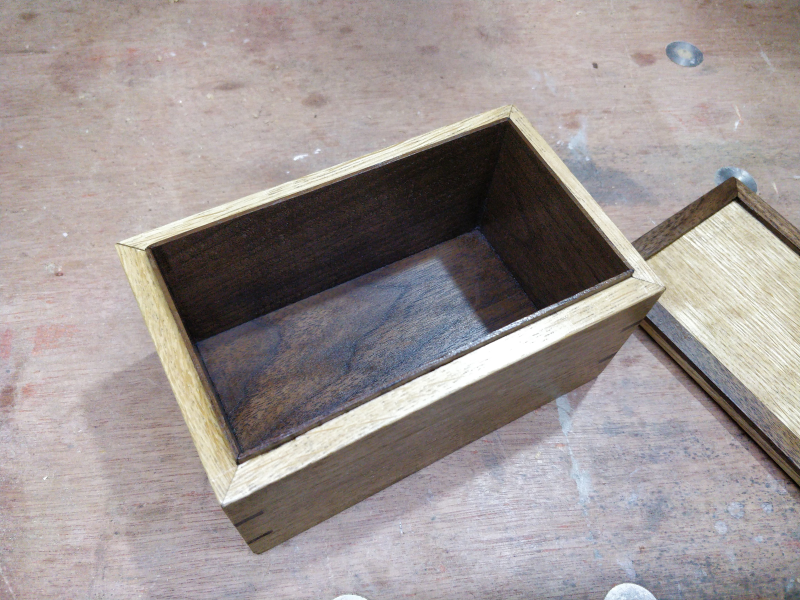 Everything was done with hand tools with one exception: the walnut liners (which are 2 mm thick) were put through the thicknesser to get them even as I didn't think my hand planing skills were up to getting them that thin and even over the whole area.
G

Bunk bed for Daughter's bedroom. The aim was to create more space. I'll be installing a basic desk underneath.
Made from stud/CLS material and painted.
I don't enjoy this work but buying a ready made version is poor value for money. This one will be easy to recycle at a later date.

Love those little cheeseboards. They'd make nice gifts for a dinner/family do.
G

What is kiat?
P

danish said:
Some time ago I build this out of plywood.
Now I added a chest of drawers next to it using same material and method:
View attachment 100851
Click to expand...

So Danish, what is the carcass made of? Is that effectively a home-made ply out of Oak? Did you make it yourself?
D

PaulArthur said:
So Danish, what is the carcass made of? Is that effectively a home-made ply out of Oak? Did you make it yourself?
Click to expand...

Hi Paul - it was some spare oak that the guys doing our kitchen left over. I didn't make it. It would have been better with solid oak, but hey, this was free
D

gregmcateer said:
Amen to that.

Thanks! Sorry i spelled it wrong, its Kiaat. Its an African hardwood which looks great. Smells really nice too. The only downside is it is irritating to the skin while working with it.

It was a 28mm thick plank which I halved the depth on the bandsaw to make 2 thinner planks which I halved length ways and then joined and then cut the boards out and then did a ton of sanding.

Remember using kiaat when making the frame for a wall clock in my last year of school (1984) in SA, lovely wood to work with, and beautiful when combined with a lighter wood for accents!
D

NickVanBeest said:
Remember using kiaat when making the frame for a wall clock in my last year of school (1984) in SA, lovely wood to work with, and beautiful when combined with a lighter wood for accents!
Click to expand...

Thats really cool, maybe you were in my dad's class, also from SA he made a clock with a Kiaat frame. I will try find a picture.
D

There you go, not a great photo sorry this was way back in around '97 in SA. Probably have a more recent photo somewhere. Its in the loft now as the mechanism stopped working

I don't even have a photo of mine that I know of. As far as I remember, it was the final project for a number of years for all matriculants... I know my brother made one as well the year before me.

Edit: Just get a new mechanism... they were simply plastic contraptions we bought for next to nothing, and ran of batteries (see this and this)
Last edited: 25 Jan 2021
D

My dad's was a proper mechanical mechanism with weights and chimes etc. You can kind of see in the picture. The face etc is all one piece.
A good clocksmith could repair it I'm sure.