Hi folks, I have acquired what was once a card table and, it is my intention to play around with it and modify it somewhat for use by my granddaughter.

However, having dismantled it in readiness for lots of sanding and preparation, followed by a few coats of paint. I notice that in one or two places there are a number of perfectly round holes which are about a couple of millimetres in diameter. I am wondering if these are the signs of woodworm and if so, how can I tell if they are still active and which may result in the need for treatment.

These holes are all that can be seen. there is nothing else wrong with the wood, there are no signs of any surface damage such as rough or soft areas.

I have attached a small photo of what I am talking about.

Any thoughts/advice will be much appreciated. Thank you. 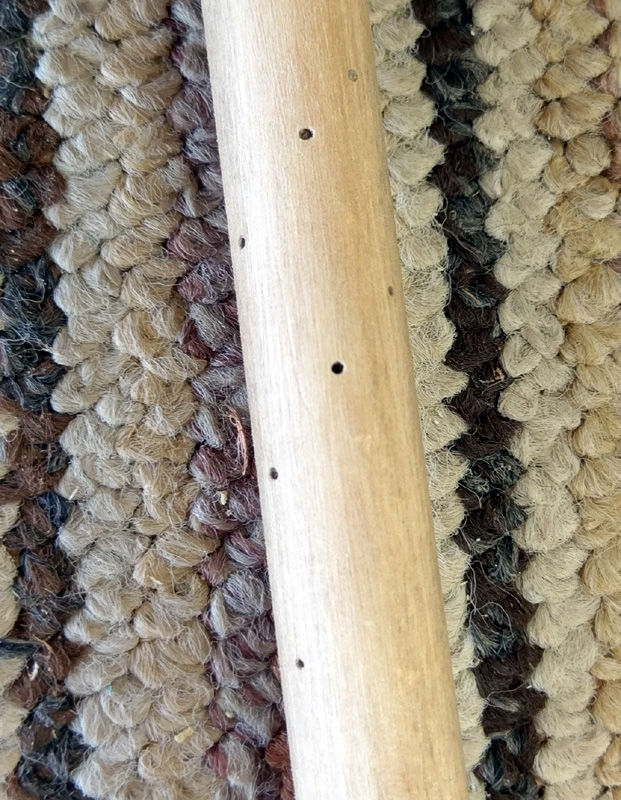 That could easily be woodworm, and it is the time of year for them to come out.

It is impossible to say whether or not they are still active (or at least, if it is, I don't know how). I've just had my first infestation in 20 years in my bench. The wood was infested when I bought it (though I didn't know that at the time) and loads appeared the first spring after I built it. I treated it and had no trouble afterwards, until this month.

I used a Spear & Jackson Woodworm Killer on it and it appears to be working. They've continued to hatch out, of course (those holes are exit holes, not entry holes) but the little pippers get poisoned as they emerge and die pretty much immediately. I've even got one or two half out of their hole.

It's a tad worrying as my workshop is a timber-framed building, but I've seen only two airborne and they were easy to deal with as they fly slowly and evenly like a hot-air balloon rather than erratically like a housefly.

Looks like possible evidence of the rarely seen Irish flute worm, reputedly heard in dark taverns across the country, but never seen!

Can you fit it in the freezer for some time?
O

Can you fit it in the freezer for some time?
Click to expand...