I am after some help please. I read the forum almost daily but never have had reason to ask for help until now. Hopefully someone will knwo the answers.....I am building an oak sleeper raised bed and the 9 sleepers, whilst being generally the correct sizes, require planing so that they are allsimilar in size. One requires about 15mm taken out of the last metre or so of the 2.4m sleeper. Being oak I thought I would use my late father's power planer that I found in his tool collection. I have never used it but I understand how it works as I have a planer thicknesser myself and it is essentially a hand-held version. However, I replaced the blades having checked they were the same type and size and now the blades won't reach the 'outfeed table' so there is no cutting - see photos. The straight edge of the set square is sat on the outfeed table to the right in the photos so you can see the gap from the blade which is at its highest possible reach. Does please anyone have any idea how to adjust this! I did try the plane before I changed the blades and it worked and cut fine. I cannot see how to raise the blades. The machine is a Bosch PHO 2-82 600w.
The other issue is that the only part that requires planing down is the last 1m going with the grain. Can you use a planer from halfway down a board? Certainly I can't at the moment but that is hopefully due to the blade depth issue.

The blades in the picture don`t look like they are quite at the highest position on their travel to me.
Even if they dont quite line up with the rear sole of the plane it will still work.
There may be adjusment on the wedge that holds the blade, some do some don`t. Or perhaps you can add shims, from the picture it looks like there might already be a shim of some kind in there, under the wedge.
You can certainly plane from part way down, just go steady and overlap the passes as you go, finishing with the longest pass. (hope that makes sense) You might have to "blend" it in with a hand plane after, of course being garden stuff might not be too important.

I've had a look at mine but I think it's a slightly different version of the same model. I'd have bought it in the mid 90s.

I don't think there's any scope for adjustment, you just slacken the screws, slide the old blade out and the new one in. Or reverse the cutter - they come with an edge along each side.

Here are some photos, trying to show that, as you say, the cutting edge bites at this position 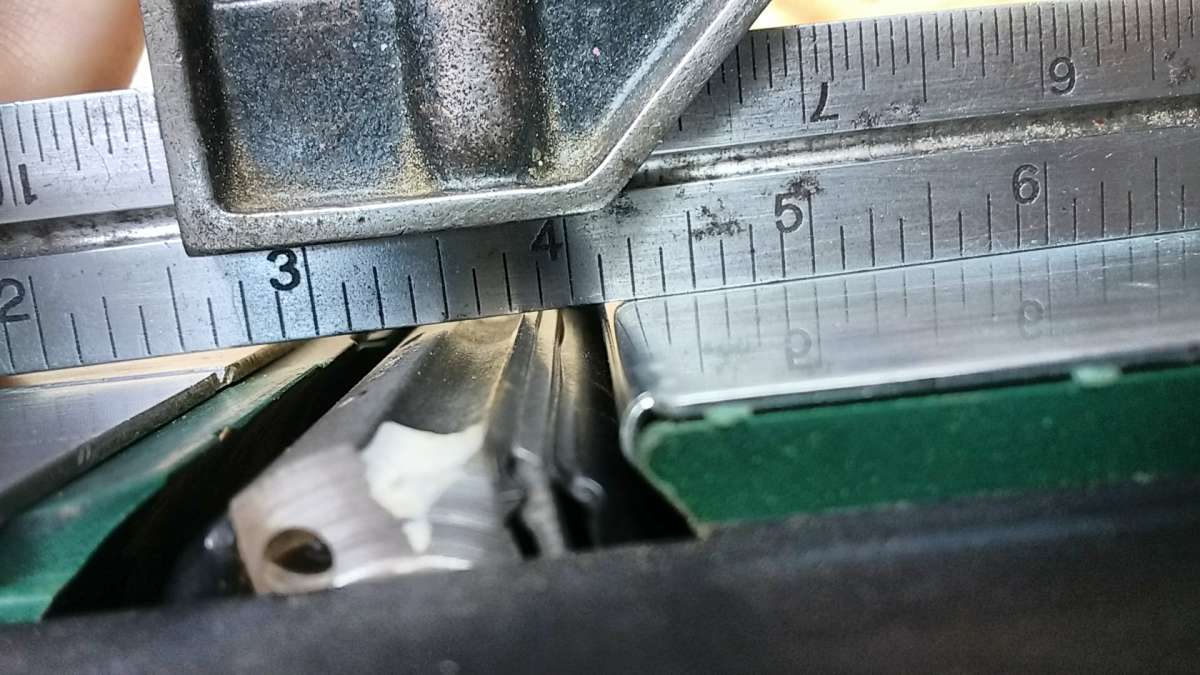 and continues to cut until here 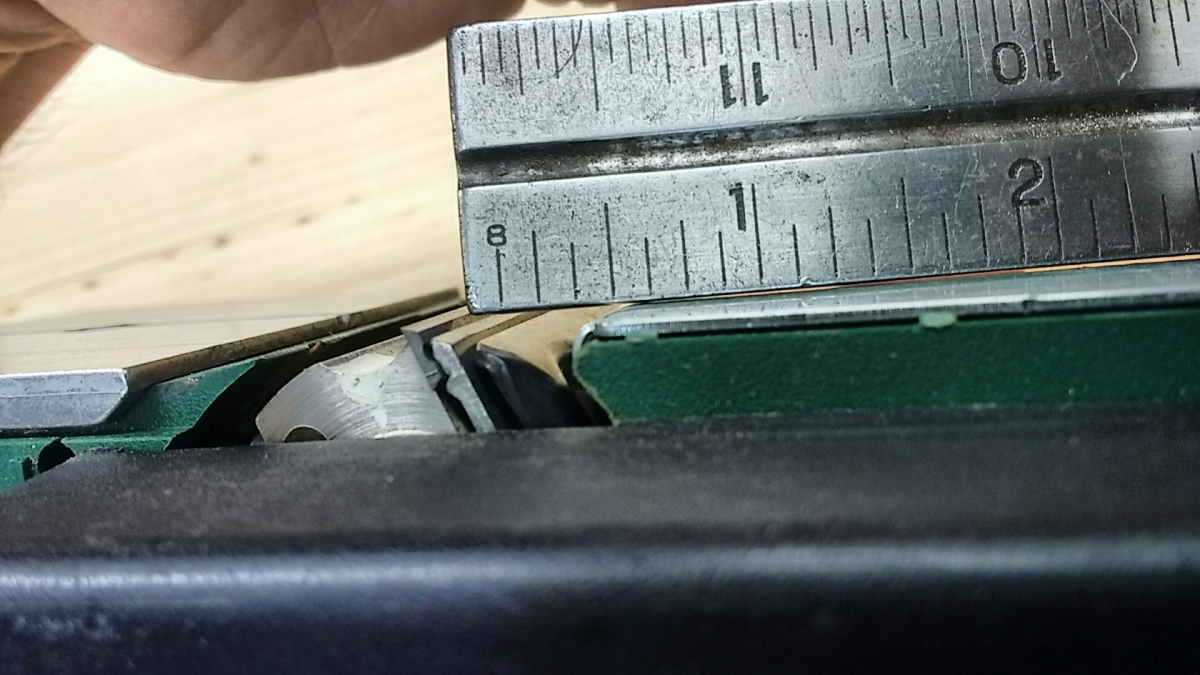 On mine, there's a grooved clamp underneath the black bit with the screws in.
I thought I could find the manual, but it's not in the first three places I've looked...
L

I have a PHO 16-82 (& I have a manual). The blades for this are reversible -- are yours? There isn't anything in the manual that suggests there is any adjustment for blade position.
C

Andy, yours cuts correctly as the blade reaches the same height as the rear table. Ollie, the blades are at their highest point and as such don't reach the wood so I cannot see how they can cut? What I cannot understand is that it worked before I changed the blades and there is no adjstment and now they are about 1.5 - 2mm out. So weird. I will persevere - planing so much oak with a number 4 Stanley doesn't fill me with joy. Might see if I can get together a couple of shims as Ollie suggested. Thanks for the replies.
R

Silly question but you are aware of the depth of cut knob at the front of that planer ? Apologies if grandma is ova extracting.

The base/outfeed tables are different. Mine is just bent sheet steel, wrapped around. Yours looks like a block of aluminium, with something in front of it.

It doesn't adjust does it, to give some sort of safe parking position?

I'm looking for anything else you might have changed without realising as the blades look fine.

Mine only adjusts on the ramped toe.

I had a cheap Ferm one from Screwfix long ago. The blades stopped cutting because the bearings seized and melted their way back through the plastic case until the blades no longer touched the wood. I've always found them a bit scary though, so didn't replace it.

I've looked at the manual craigsalisbury found and that shows resharpenable HSS blades on slots for adjustment.
Mine uses these disposable, double edged blades: 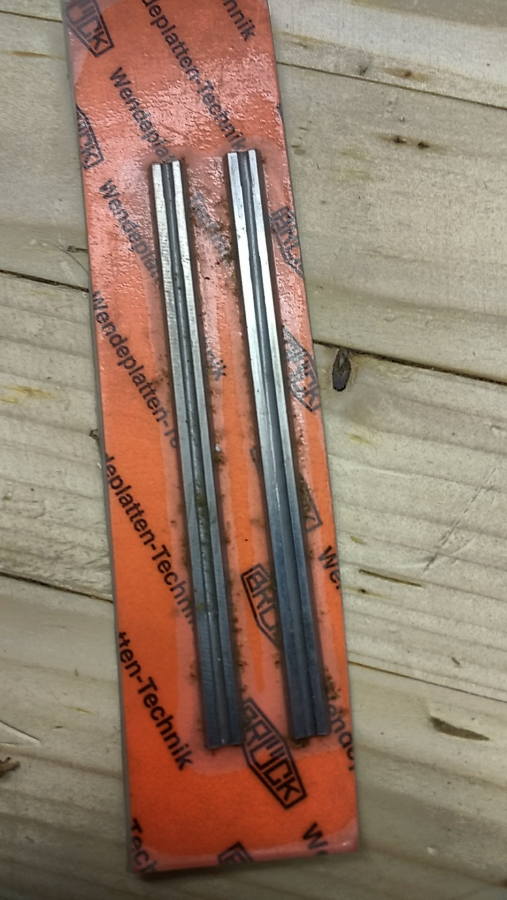 Are you sure that your new blades match your old ones?
J

OK. I have worked it out. Ollie gave me a clue - I remembered when I changed the blades over that there is a sprung shim under the blade block. I slacked off the three locking allen screws and then turned the two locking philips head screws until the blades were at the correct height and then locked the allen screws. Those of you with planer/thicknessers may have seen the method of setting the outfeed table height by placing a block of wood across the blade, turning the blade and seeing how far the wood moved. making a pencil reference mark and doing the same at the other end of the blade. I did that to my planer and it works perfectly and also from halfway along the board (thanks Ollie). Thanks again guys.
J

Sorry Andy - just seen your reply. Yes my blades are the same. I sat them alongside the blades I removed and they were identical.

JAW911 said:
I will persevere - planing so much oak with a number 4 Stanley doesn't fill me with joy. Might see if I can get together a couple of shims as Ollie suggested. Thanks for the replies.
Click to expand...

For removing the volume of wood you're talking about I would mark my desired thickness with a string line and remove the bulk of the material (say 13ish of your 15mm) with an adze and/or (properly sharpened) axe.

I would probably do so even with access to a power plane, just for speed.
O

Good result all round !