I don’t know about you guys but it feels to me like we are short on builds at the moment, so in an attempt to be a part of the solution more than the problem (that and I want to try out the new direct photo posting), here’s a picture frame WIP.

It’s based on my “standard” design which I think is fairly good, good design being both appropriate and tolerant. It’s going directly in front of someone’s front door and it’s quite large, so as it’s the first thing she’ll see as the door opens and I work with her, I’d better get it right.

I’ve said it before and I’ll say it again, any good woodwork starts with some wood, (on this one is quite resolute) and a plan is rather helpful too, off to the scraps box we go... Unusually I have version 1 of the actual picture to work from, so here we are... 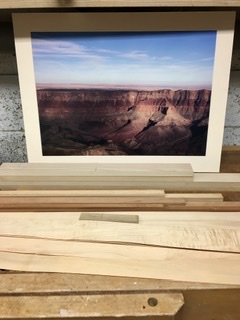 Some beech veneered MDF (because I have no MRMDF to hand), some beech, cherry and quilted maple for the face and plain maple for the back and a little bit of oak, and a big picture of a hole in the ground.

First up that bit of oak, I like single point hangers on frames but this one is too large, so I’m letting in a bit of oak to the MDF to take the screw for the eye for a wire on each side. 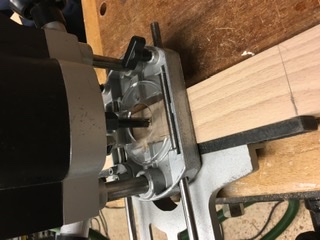 That’s a simple matter of routing out 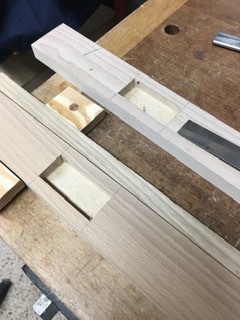 then cleaning up with a chisel. The shot in puck of oak made a satisfying squeak as it was pushed in with some glue and it can then be planed flush almost immediately.

The first bit of edging can then go on, it’s beech and it won’t be seen at all, it’s to allow some decent wood to cut the rebate into and drive the tabs in to hold the panel in. 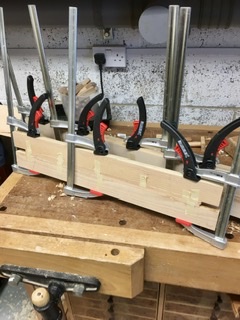 Back to the tolerant design thing, here’s what has to be dead on to make this work...
The substrate has to be exactly the same width (rail saw - easy) and the same thickness (always worth checking as it can vary with MDF, but theoretically easy).
The edging has to all be exactly the same thickness (one pass through the thicknesser - easy)
All the other tolerances get taken out as we build, so the edging is all rough on two sides, straight off the bandsaw.

And that certainly is one big hole in the ground, I was absolutely staggered when I saw it. Nice project Aiden, we all have our own pet ways of doing things and you certainly seem to have it sewn up with this. Ian

Glue dry, the beech edges can then be taken down to flush with the substrate, each time I think about making a sub-fence for the router and zipping them off quickly but I never do, a block place and a few minutes gives a good result and there’s less chance of an error, plus there’s some fluffy shavings to wipe glue up with generated. 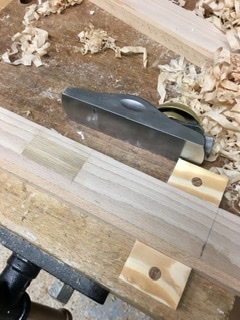 the new bench dogs were worth the hour or so to make a large set in a range of sizes, the tip about using a plug cutter to make the spigots is a great one (Custard was it?)

That done it’s time to mark up the desired lengths and the centrelines. This is less critical with the more subtle maple but with a very pronounced grain you want to align the grain features left/right and top/bottom, sometimes also with the contents of the picture such as inline with the eyes etc Also, don’t forget where the oak pucks are for the wire eye screws 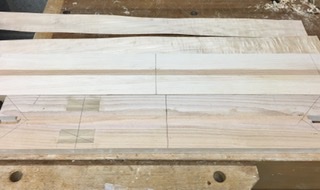 The long straight cuts are done with some scrap MDF and a veneer saw, again no need for super accuracy here either, a slight overhang is perfect, too much though and the vac bag can push the edge in/up instead of the desired down. 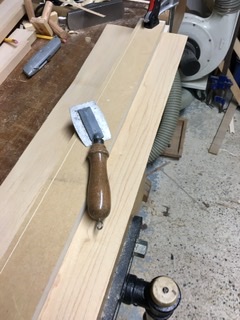 The inside edges are attached with a tape hinge to facilitate fast glue-up and a final check on the correct grain matching is all we will get done tonight, hopefully in the bag tomorrow 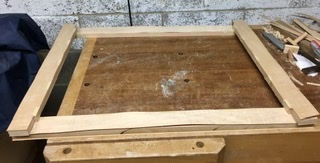 One of the few advantages of working from home... you can vac-bag whilst your tea brews 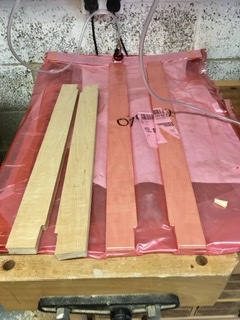 Here’s my temporary, single use bag made a couple of years ago, still going strong. It’s only just long enough but I couldn’t be bothered to get out the large bag-press one, that and long enough... is long enough. I’ve done two pieces at a time just because of the speed the glue goes off on a warm day. I’m using plain old PVA applied with a glue roller for an even film, making sure the edges are well covered, about 2 hours in the bag and it had grabbed enough to take out. I will not clean the edges back for a while though.

I decided to crack on with the outside edging, one piece was showing a bit of a large glue-line so I put larger clamps on it which solved that, but also made some slight dents on the other edge, they steamed out ok but in the process of steaming and checking against the cherry for the inside edging there appeared to be something not quite right... the cherry for the inside appears slightly darker (could just have been more exposed to light) but also to have an open grain... that’s not cherry! 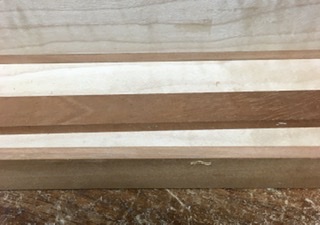 Oh well, just as well that was caught before I started glueing it on, I’ll cut some more cherry tomorrow

I got the edging on today (using actual cherry this time), taping to locate then clamping up gently to get a nice narrow bond line, not that anyone other than a woodworker is ever going to look that close 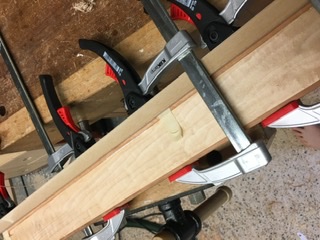 and with the warm weather was able to plane them all flush in a day and cut and initially miter the ends. 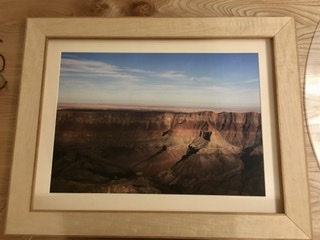 Traditionally when something is going this well I like to make some cretinous mistake and screw it all up... so not wishing to disappoint I did a dry fit and something wasn’t right, the picture wasn’t central, I checked all measurements, all within a millimetre or so, yet it was clearly wrong, how was this possible? Turns out the mount is not even all the way around, so where I thought I’d cut the sides too short they are probably just fine. So we will now wait till we’ve confirmed the actually measurements of the new picture before making anything any shorter.

Dimensions confirmed off we go again...

Mitres are easy (so long as your stock is dead straight, flat and consistent and your shoot is the same), after at least 5 dry fits I added some biscuits to help alignment and finished the inside edges to 320 then shellac and wax as it’s way easier to do them now, so long as you don’t round over the mitred corner, as that really stands out 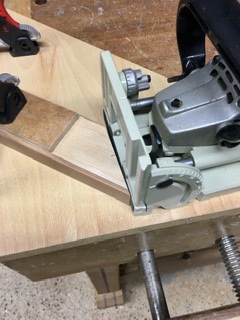 And with that done, add way too much glue and clamp 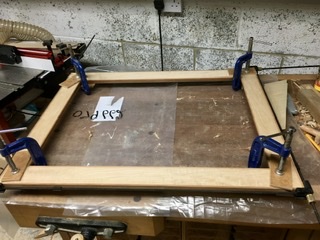 some scrap plastic as a bench covering is a great thing, of course it does nothing for the mess that’s already there, my bench is heading for its second skim in its 17’ish year life.

there’s no point checking for square, if your mites are together, it’s square or you’ve done something pretty spectacular

Jumped ahead a bit, if the build is good and your glue-up not too dramatic then you can be at the finishing stage pretty quickly. I manually sanded with abranet and an extractor pad from 180 to 320 on about 30-minutes, I often like the lovely consistent chamfer from a router table but with these thin cherry edges I want to preserve the crisp edge so just broke it with 320 paper last of all. Finish is Osmo hard-wax oil to bring out the ripple in the maple and keep it that way, first coat on... 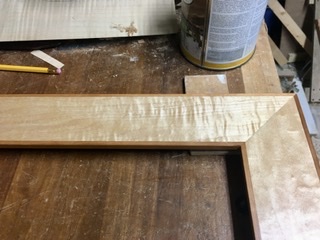 Finish on and wax hard the new backboard is cut (white hardboard this time not cardboard like the professional original) and then the wire. I bought a wire kit which had larger wire than most... I think I’ve overdone it, this stuff probably has a 100kg limit at least. Anyway, the screws for the eyes are into pilot holes made with a gimlet (a great too, get some) and then the aluminium crimps I did with mole grips, not the right tool but it seems to have worked. 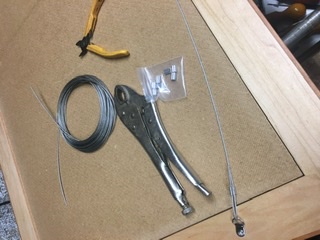 I always put felt pads in the bottom corners of the frame back so it rests on three points not the edge of the frame, slowly marking the wall and damaging the frame.

We cut the old picture down to centre the image and here’s where we are, just glass and final assembly now 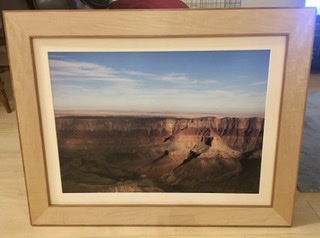 Wow. I've never worked with veneers before. Either pre-bought mouldings when I first started, but since then solid wood with a story. Picture frames is pretty much all I do though. I frame my own work, usually the image having a connection to the wood.
You must log in or register to reply here.