Hello everyone. In the spirit of the lock down summer we've started doing the garden up, I've laid my first patio, and I'm now going to have a go at a pergola as well and just wanted some advice please. Bear with me though please, as this is a first for me.

The posts and braces will be 150 x 150, and the rest will be 50 x 150. One concern I have, though I might be over thinking it, is the spans for the cross beams and the top beams are quite long, so I was thinking to use C24 treated timber. Would this be strong enough, bearing in mind it should only have a few climbers growing up it over the years, but you never know if one of the kids might think it's a bloody climbing frame at some point!!

I'll use some post bases to raise the posts from the ground that I've seen Mike and others already advise on here, and they'll be secured to concrete footings. I was thinking about 800 - 900 mm deep. Again, this may be overkill?

For fixing the top beams, I was just going to screw these to the cross beams from underneath, so not to create a small hole for water to collet. I've seen some that got notched and sit on the cross beams, but I thought that may weaken them slightly and might effect the strength across the span? And the ones that run near the posts, again soiled I notch the posts for these or just pop a coach screw through?

The patio it self is quite close to the boundary fence, with nearly 500mm along the back side and about 600mm along the side, so that's why the top beams only overhang on the one side. And I did wander if it's maybe a bit tall? The height to to the top of the top beams will be 2.4 m, so plenty of headroom under the beams (should be around 2.25m) 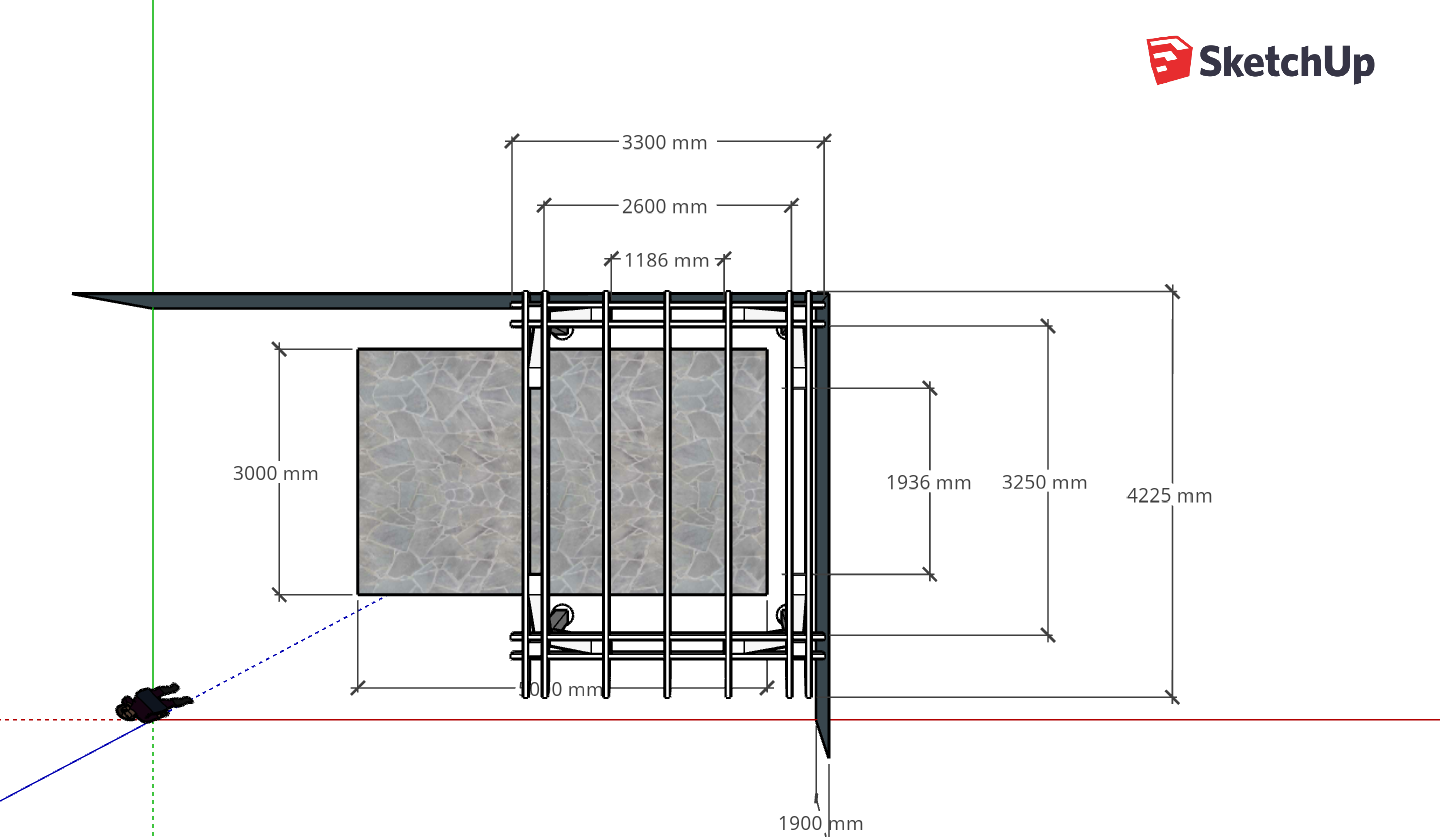 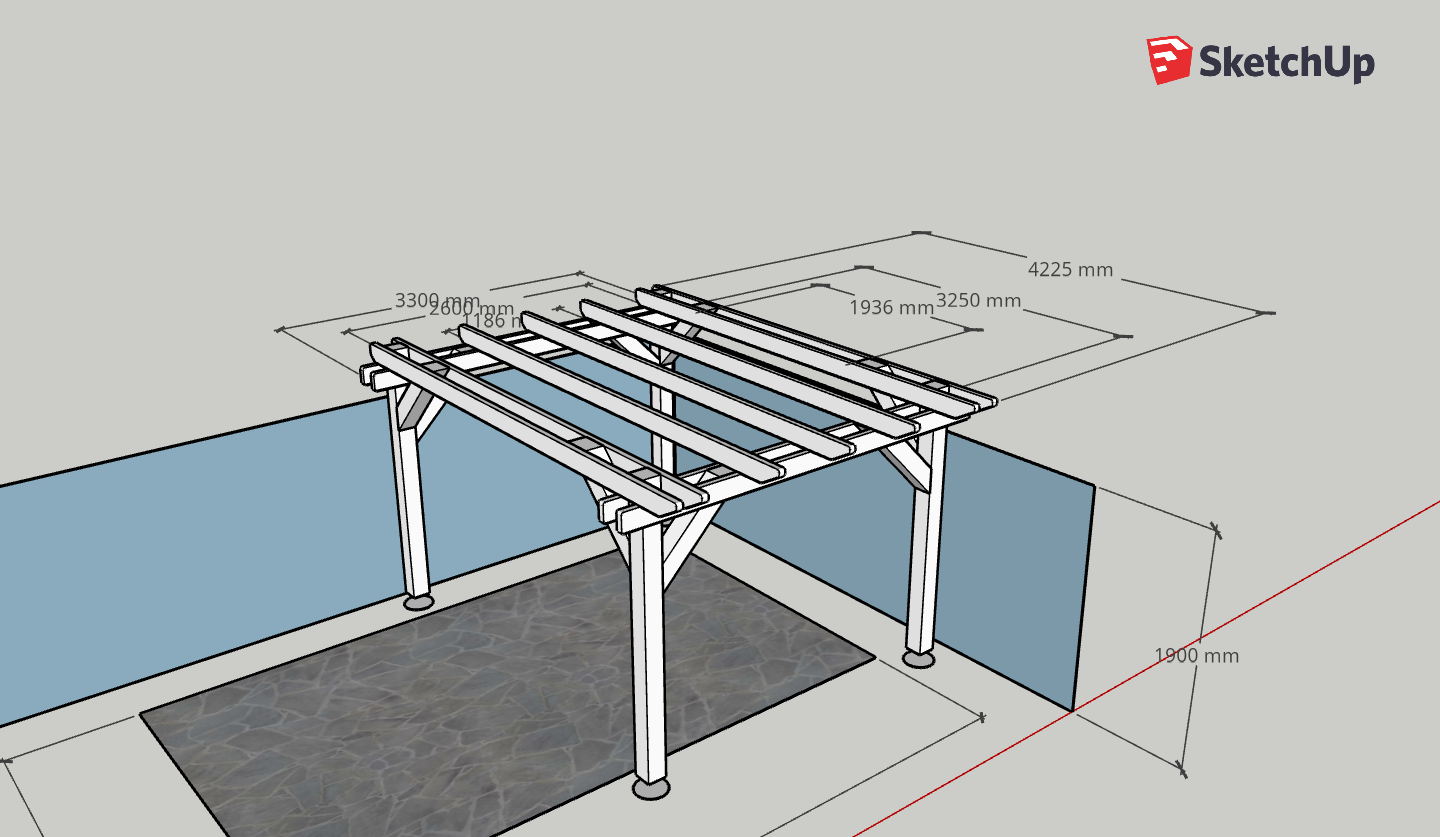 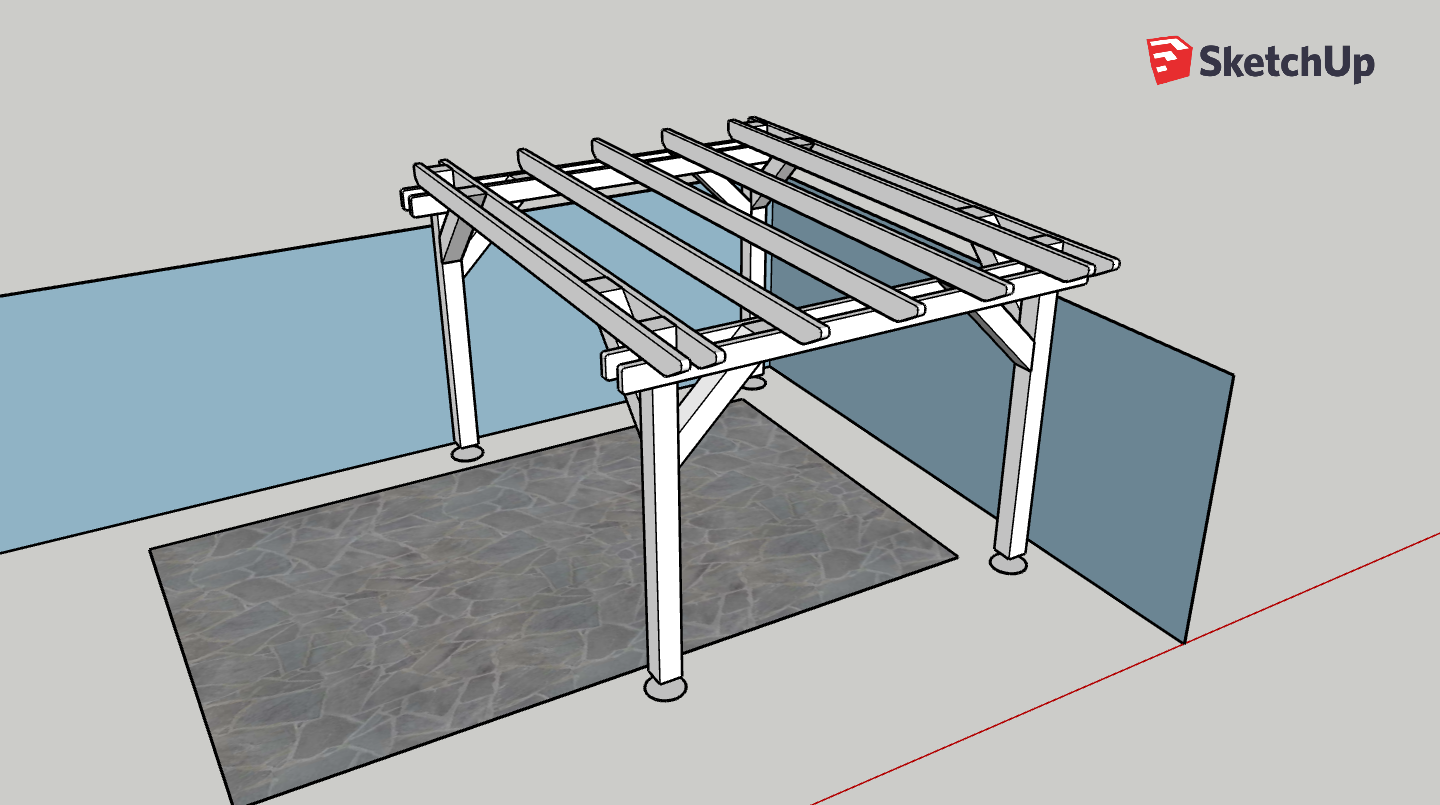 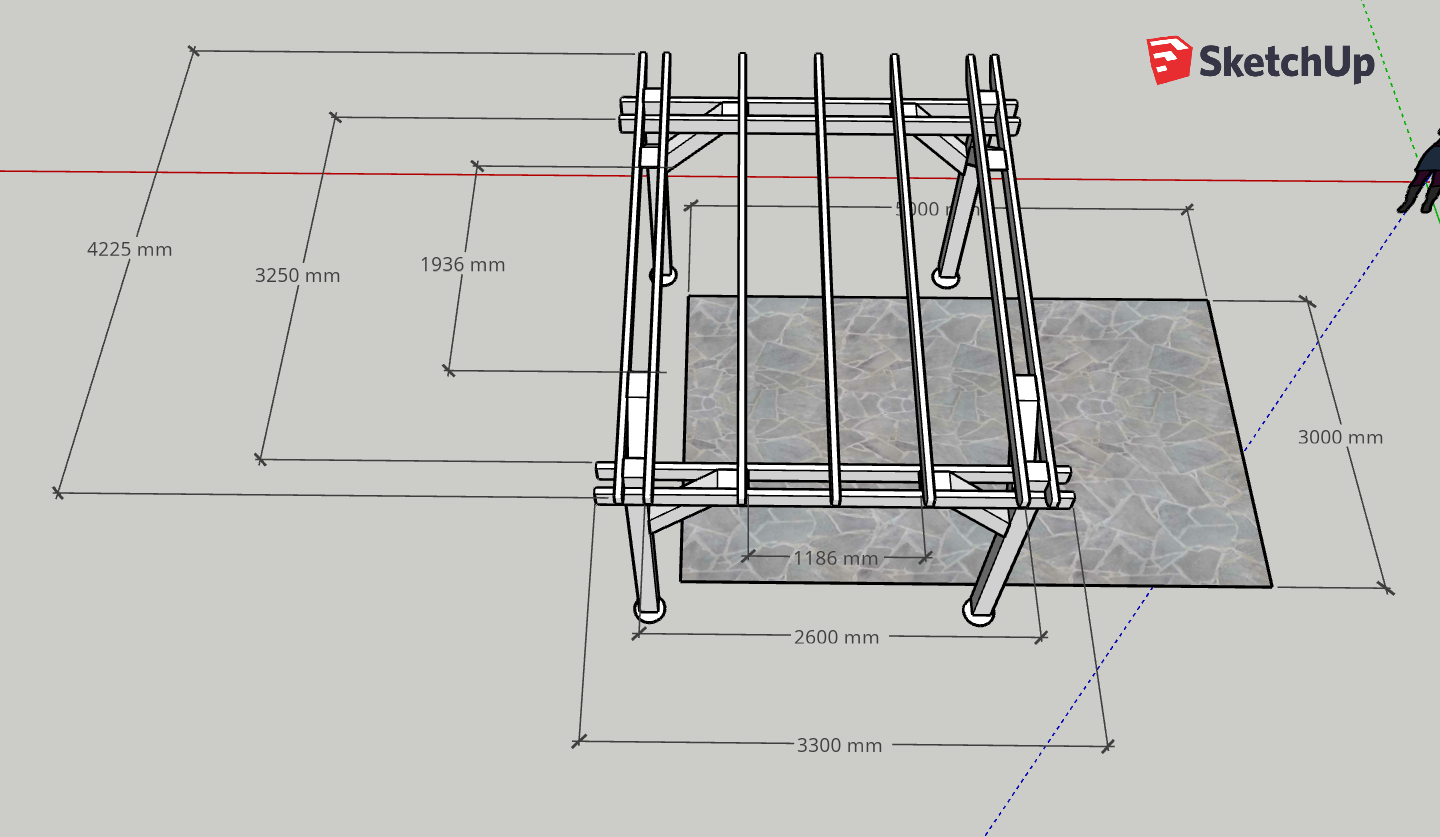 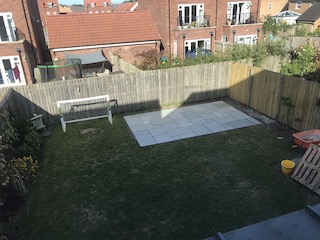 I will also be making a raised bed and hopefully a roughly 6 x 8 shed at some point as well, so no doubt I'll have plenty of other questions

Six inch square posts.......they're chunky! Are you sure you aren't building a car-port? Braces are always narrower than the posts and beams, and there is no structural need for them to be more than 2" thick.
C

We’re putting in a chunky raised bed as well so hopefully it won’t be too out of place. I will slim down the braces though. What do you think about the length of the cross beams though, should they be ok?

Yep, that's somewhere between fine and over-kill. It is only a pergola. And no, you don't need C24 timber. C16 is fine. I would actually be making a joint, though, where they meet the longitudinal members, otherwise there is nothing to prevent twist, or a creeper pulling them over.
C

Just realised I’d forgotten to post this pergola after I got it finished around spring this year. Also made the large planter in the back ground, and the giant bed at the front.

The shed base is also down but putting it off until probably next year, hopefully prices of things will be a bit cheaper! 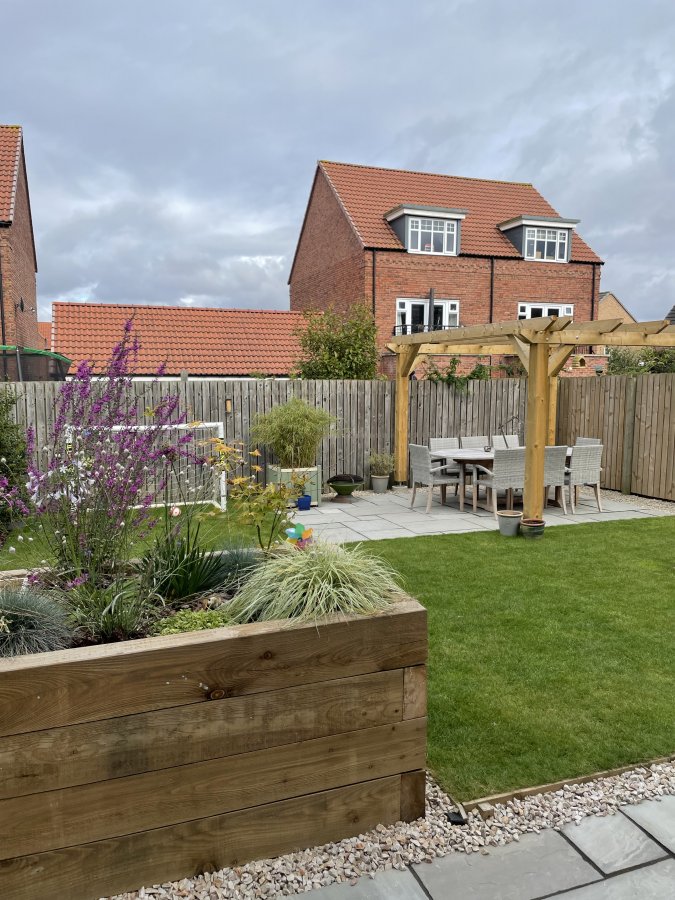 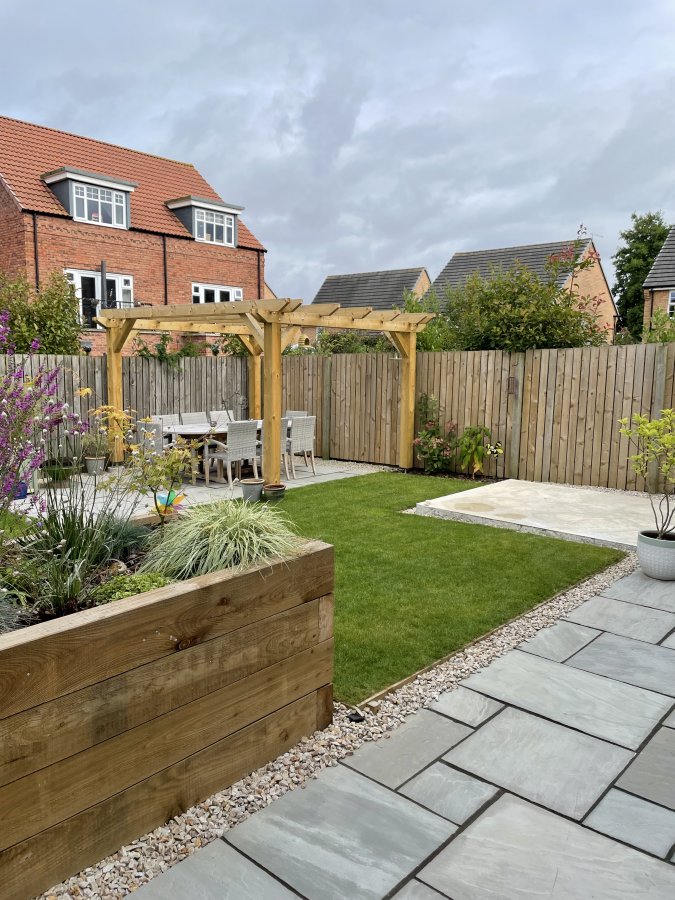