Hi guys
I’m about to embark on most likely the last ship model build of my life. It will take me probably 5 years to complete. When she arrives the kit will have set me back about $2200 Canadian. Not my normal purchase. Now my questions: it is available in both cherry and pear. Which one would you go with? Secondly please advise what finish you would recommend for each wood. I want this to be outstanding when I am finished. I don’t want the model to look like it was covered in plastic if you know what I mean. A nice finish that will not look fake or shiny.

Thanks for your help

I use both American Cherry and Swiss Pear regularly.In appearance they're actually fairly similar but Swiss Pear would have the edge for model making as it's even finer grained than Cherry and the grain pattern is almost invisible, consequently it's physical characteristics are less likely to give the game away regarding scale. In addition Pear is slightly more pink in tone and Cherry is slightly more orange, although within a few years they both go the same wonderful nut brown colour.

However, there's one caveat. American Cherry is particularly homogenous, in that one Cherry tree is likely to be pretty similar to most other Cherry trees, therefore you can be fairly confident that the timber will be consistent and of an acceptable quality. Pear is more variable, for a start there's both steamed and unsteamed Pear.

The types of Cherry and Pear I use for custom furniture tend to be the very highest grades with decorative figure, but aiming off for that here's an example of Pear on the left and Cherry on the right. As I said, both these have "plum pudding" or "curly" figure, which your timber won't, but you can just detect the slightly tighter grain pore size on the pear and the slight tonal difference. 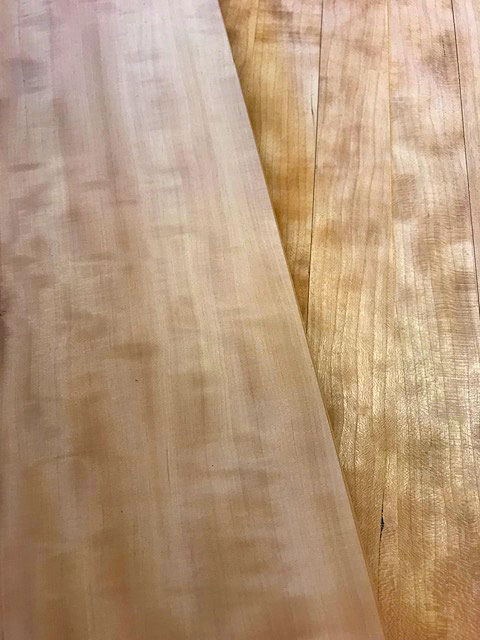 Regarding finishing, here's an example of a test that I did for different Pear finishes, 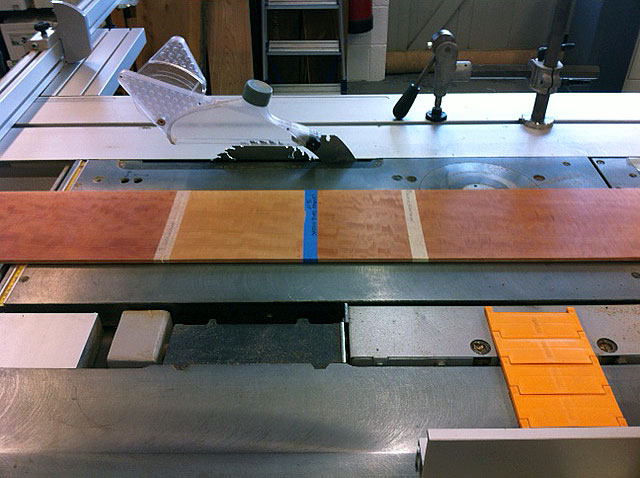 Surely the finish decision largely depends on what type of model boat you're making? A Riva speedboat would be varnished but a square rigger wouldn't be! One thing I'd say though is if your model will live inside a glass cabinet I'd consider no finish at all. As I said earlier both timbers, Cherry and Pear, will still patinate beautifully and there will be no smell which would persist for years in an enclosed space with an oil based finish.

Good luck with your build, it would be great to see some photos of previous models that you've made.

Thanks so much for your help. I think you brought up a great idea in applying no finish at all. This never even crossed my mind. That is definitely the way to go. This baby is from the 1700’s and I’ll let the wood be the finish. Great hearing from an expert. Thanks once again.

Welcome Whiskers, I'd also love to see pics of this future project and and any previous ones you have done, if you don't mind sharing? I won't be alone in my fascination, you will have plenty of interest. =D>
Regards,
Chris.
W

Thanks Custard and Chris.
You have opened my eyes with the no finish idea. I have always been going to “paint” a ship model with the use of various types of wood. This will be the one. Over the years I’ve collected about twenty types of exotic woods. I will use some of each in the build. The final result hopefully will be impressive. Along with the cherry or pear used the interior supporting wood is what I believe to be red sandalwood. Once I get started I will attempt to show my progress. What heading do you suggest I put the photos under?