I got this Handy G3 & i'm rather taken with it. Jaws are about 4 inches wide.

Nice vice. --- good that it actually has the Handy name cast in - after looking at many ebay posts (no I didn't buy them all) and seeing a few with a decal/sticker still on, and sometimes with a cast-in size number or just a Reg Design No one sees that an awful lot of Handys were made (earlier ones with a two-casting static section bolted together), only a small proportion have the word Handy cast in and none (I think) say Parkinson, although they're in Parky's catalogues.

I've said this before - but I don't know why this is -- they cast their name into every Perfect (ie quick release) vise/vice. (I have seen a picture of one early one without, but it might have been filed/ground off).

I today found what I believe may be a very early Parkinson Handy - local flea market £5 - damaged, small, but has an interesting feature - will post a pic when I've checked it out more.
N

I had a Handy vice a few years ago. The only identifying feature was what I presumed was the patent number, otherwise the vice had no markings at all.

Hello, yes it is odd they don't cast the Parkinson name in. I'm wondering about timelines as looking at old B&H catalogues & Parkinson catalogues (Nigel kindly provided links previously) it looks like reg'd design type is maybe later. There's one like mine in a 1913 B&H catalogue so it may be quite old. I'm shocked at how weighty it is, really solid little devil, lovely casting.

I assume the green paint is original it's certainly old no matter what.

Really looking forward to seeing the pic's of yours dannyr, please do post them. 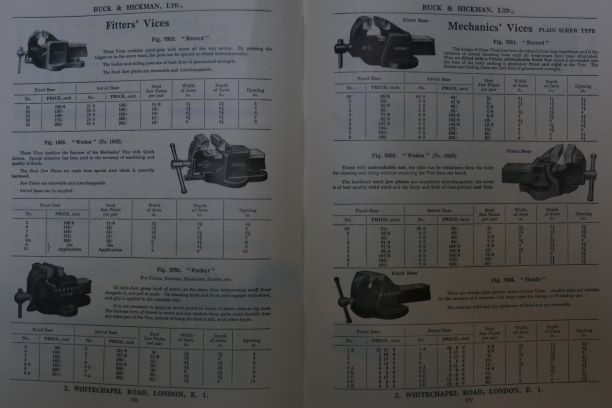 Here's a Buck & Hickman catalogue page to see some vice sizes - I do realise that if attached as a .25M file it won't have the definition to be clear. I'll see if I can size as a file that will be both sendable and readable.

The other image is a very early Handy 00 Swivel --- it doesn't have the Handy or Parkinson name cast in but I'll explain why I think it is such in a separate post here or on the migweld vice thread. But I'll certainly pay attention if someone else knows otherwise.

An interesting vice for £5 on last week's local market 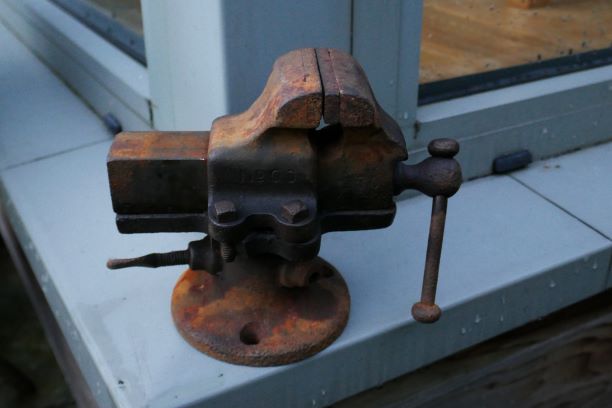 Testing - sorry it's dark but bigger size image than above - seeing if it will send and if text clearer.

(In response to questions about vice numbers/sizes/weights).

Oh wow i'm liking that swivel vice a lot, & an absolute steal at £5.00 !
Any chance of any more pics, how does the mechanism work etc?
Cool Buck & Hickman catalogue, that stuff is great, thanks for posting. Incredible to think how diverse the range of vices was & how many manufacturers.

Vono said:
Cool Buck & Hickman catalogue, that stuff is great, thanks for posting. Incredible to think how diverse the range of vices was & how many manufacturers.
Click to expand...

And quite likely all available from stock....
Cheers Andy
V

toolsntat said:
And quite likely all available from stock....
Cheers Andy
Click to expand...