Pallet wood: is this birch???

I'm making a work bench out of these pallet wood bearers. I assumed that they were spruce, but now I think they could be birch, can anyone confirm from the photo? If so, I'm pretty chuffed to have found a free source of hardwood!

Is anyone gonna help out Jez with this?

I always find these light coloured woods tricky as there's a few that look very similar and you can really only spot the subtle differences in person, it's hard to capture on camera.

The waney edge white bark would suggest it's Birch. It's not something I've used too much even in plywood form so I couldn't confirm whether it is or not.

Could even be Poplar for all I know :duno:

pallets are also difficult because they can come from all over the world and often use whatever is cheap in the locality of manufacture.

That said, with bark on I would guess that it is a uk one?
O

I have similar looking pallet wood, it's very soft and difficult to plane

That doesn't look like beech to me. (NoobWarning! I'm just guessing.)
The grain is too loose, the colour is too dark and the bark is wrong. It looks like a tight grained fir to me. Probably well wrong.
I made a Thor Hammer ( Mjölnir by all accounts, I never knew) with my 9 year old lad last weekend because he's obsessed by the Marvel films and I like spending time with him in my shed. He needs Tool Roots. Unlike my old man I tried the approach of not just shouting 'Just hold it ******* straiiiight FFS!' and he's positive about it all.

I resisted telling him the old joke about Thor and the Nun. :roll:
'You're Thor!?! I won't be walking for 3 weeks!' 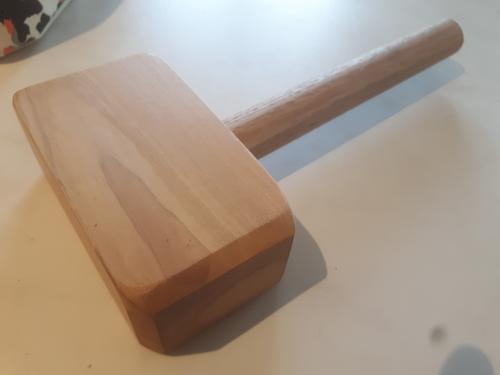 Also. when it all passes by I have another mallet down the shed.

That's a beast of a hammer for a 9 year old. Any boy would be proud to own it. Given that male development consists entirely of "hit it with a stick, and see what happens", he should have a splendid future ahead of him.
J

Thanks for the replies everyone. I am very much a noob at this too. I know what trees look like on the outside pretty well but not inside. Lack of funds means I am exclusively using reclaimed and palletwood. It's surprising what a wide variety of woods you can find, and more hardwood than I expected.

BM101, that's a great Thor's hammer! Can't wait till my kids are old enough for this kind of project. You know I said birch, not beech right?

I suspect birch because the bark is white with lateral stripes - which you only find in birch or cherry trees and it's not cherry. Also I read that it's hard to see the rings because the yearly bands are a similar colour. It's pretty heavy, and fairly hard, although it hates being planed against the grain, when it clogs up like a softer wood. At first I thought it was cheap white pine as it's light coloured but it doesn't have many knots and the grain looks wrong.

I've read that in some northern hemispheres birch is the commonest tree so who knows. The pallets do not have the international shipping stamp though, so it may be UK made? They held gravel boards.

I'm using for a Paul Sellers style workbench, it's taking forever to plane square. It's not in great shape at first as you can imagine. I am chuffed at the thought of a solid hardwood workbench though, if birch it be.

jeztastic":16knxjqb said:
You know I said birch, not beech right?
Click to expand...

Christ on a bike. My apologies! What a gonk! Literally NO idea how I missed that one.
J

marcros":2pxh4czg said:
That said, with bark on I would guess that it is a uk one?
Click to expand...

Why does it having bark mean it's likely to be a UK one? I think you're right due to a lack of a stamp on it, but what does bark have to do with it?

the logic may be flawed/incomplete, but my assumption was that it probably hadn't crossed an EU border. I had to look into the spec of some pallet and packing timbers at work, and the international spec (at least on those) was quite restrictive on what timber could be used, how it was treated. I was going to write about the lack of a stamp too. bark on timber tends to get customs officials very excited.

People assume that pallet timber is rubbish. In general, it may not be the top quality, but it isn't just anything that has been found laying around. As you say, sometimes you find some gems amongst it. I am not sure where this sneaks in, whether it is smaller pallet manufacturers, or companies making their own pallets rather than buying in, because you would assume that a pallet company would buy fir/spruce by the lorryload from a supplier specialising in just that.
Y

What does it smell like? I've been using birch ply recently and it has a quite distinctive smell. It reminds me of creamy milk (no quips about babyhood memories/mammories please)
Brian
R

Looks a lot like my birch firewood when cut.
Assuming a UK pallet there's not much else it's likely to be as that doesn't look like a typical pallet softwood.

I made my PS workbench from the cheapest whitewood - it has the advantage that it's very easy to plane so you can lash it together more quickly.
J

Yojevol":2yxoqr7l said:
What does it smell like? I've been using birch ply recently and it has a quite distinctive smell. It reminds me of creamy milk (no quips about babyhood memories/mammories please)
Brian
Click to expand...

"Hold the baby dear, I'm just going out to the shed to sniff the pallets..."

Yeah, it smells nice, not piney, but I don't know how to describe it.

I'm likely to be back with other similar requests. I've come across some very hard, very red wood, and some lighter hard wood too.
M

Am I the only one that has to hear this joke now?

Just re bark on pallets and crates. I buy a lot of stone. Mostly 600mm by 900mm slabs. Quite a lot comes from China, India etc and almost all of it is in hardwood crates. Almost all of them have a lot of bark. Hardly ever do we see timber stamped.
B

No Memzey. I never heard it that I recall...

AJB Temple":30n5k5vw said:
Just re bark on pallets and crates. I buy a lot of stone. Mostly 600mm by 900mm slabs. Quite a lot comes from China, India etc and almost all of it is in hardwood crates. Almost all of them have a lot of bark. Hardly ever do we see timber stamped.
Click to expand...

I've had a go at one of those crates for shipping stone. The wood is very red and pretty hard. No idea what it is, but I crave more of it. Unfortunately I concluded that it was too firmly put together to bother with. Lots of clenched nails and staples, the heads sheared off when I tried to get them out. I took it to the tip in the end.
S