On Thursday my wife was terrified by a very loud bang as she opened the bottom door of our Stoves Panache EF902 double electric oven. The door had dropped to one side; I dashed into the kitchen to find my wife rather shocked it had taken her completely by surprise.

The oven could still be used but the door needed to be wedged closed. After dinner I set about repairs but with heavy snow falling I didn't want to visit the workshop but I do have a small selection of tools in the kitchen including a set of screwdrivers. I opened the door but couldn't see how to do the repair the steel arm just slid in and out so I removed the door and removed all the shelves etc. but without access; nothing for it but the oven needed to come out after isolating it from the supply for safety.

What could I use to support the oven; looking around all I could see were a pair of wooden dining chairs with cushions so I placed these in front of the oven but as they were much too low I had to gently maneuver the oven eventually laying it on its face this now completely blocked half the kitchen off. Removing the left hand side cover left me very puzzled indeed as to how this arm attached to the hinge; there was a large diameter spring still attached to the hinge unit but how did this work; the top door hinge was different not having this large diameter spring but it did have a long spring? With all the kitchen lights switched on I still needed to use a torch and at this point I'd had enough still very puzzled and unable to get to the other side of the oven in order to remove the right hand panel; I returned the oven into its housing and sought help from the web..

For years I've bought appliance spares from "espares" who are brilliant; I searched for the hinge to fit our oven but without success; what a shame because there's usually a diagram to be seen; after more web searching I gave up.

With 4" of snow having fallen I was out by 7 o'clock yesterday morning to visit the supermarkets back home before 8 o'clock; now I could concentrate on the oven repair and this time I'd carried two heavy lengths of thick ash timber into the kitchen; now with the height of the dining chairs increased I was able to pull the oven out but this time in its upright position allowing access to the right hand side panel which I removed. I could now understand the hinge operation; the bottom door hinges have two springs each the long spring has completely disappeared where it had broken with such a loud bang; on my hands and knees using a torch I found the broken spring tormenting me it had flown right under the base plate of the oven hiding there laughing at me. All this torment and heavy work removing the door which didn't need removing at all and the struggling in the dark and lack of space to move around it only for a broken spring; GRRRRRRR.

Now for the repair; I had searched without success for details but I found the top door which we seldom use had identical springs; I removed a spring from the top door and replaced the broken spring; I then took the broken spring down to the workshop risking broken bones it being so slippery underfoot; it sure was bad outside; I have a big box of springs but nothing just right so I nipped the broken spring in the vice and using a flat screwdriver and pair of pliers forced the end of the first coil at the break into a loop; this sorted the spring out; back in the kitchen the spring was fitted to the top door hinge easily but using a hole allowing compensation for the shorter length; I was pleased to see the back of this job.

Typical of my luck I then browsed the web but this time searching for oven door springs and guess what I found at espares? 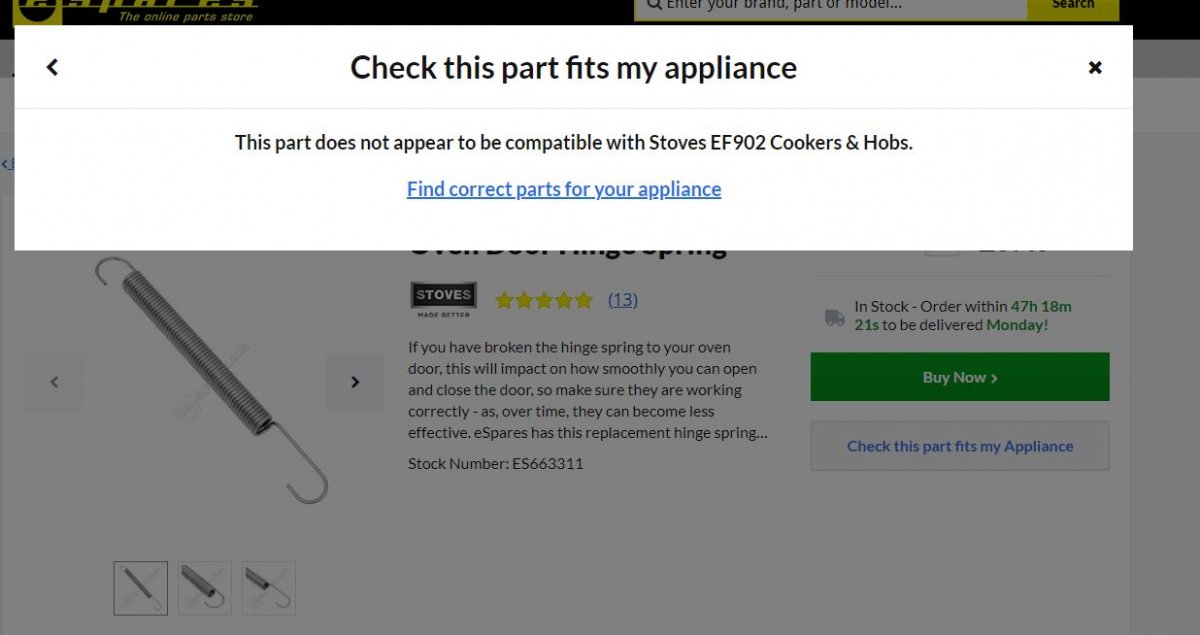 Not compatible; it looks identical to the springs on our oven so I've bought one as a spare; springs are handy to have in the workshop so it won't be wasted. 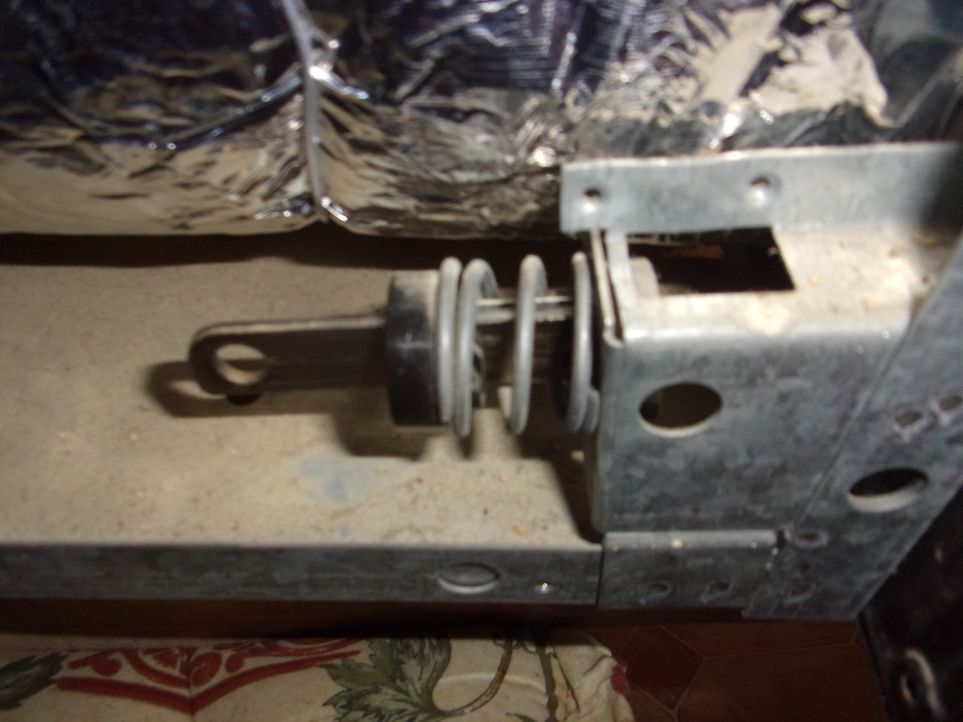 Here's the bottom hinge unit showing the large diameter spring which I confess really threw me because I didn't understand how the arm connected to it; something was obviously missing but no sign of anything? 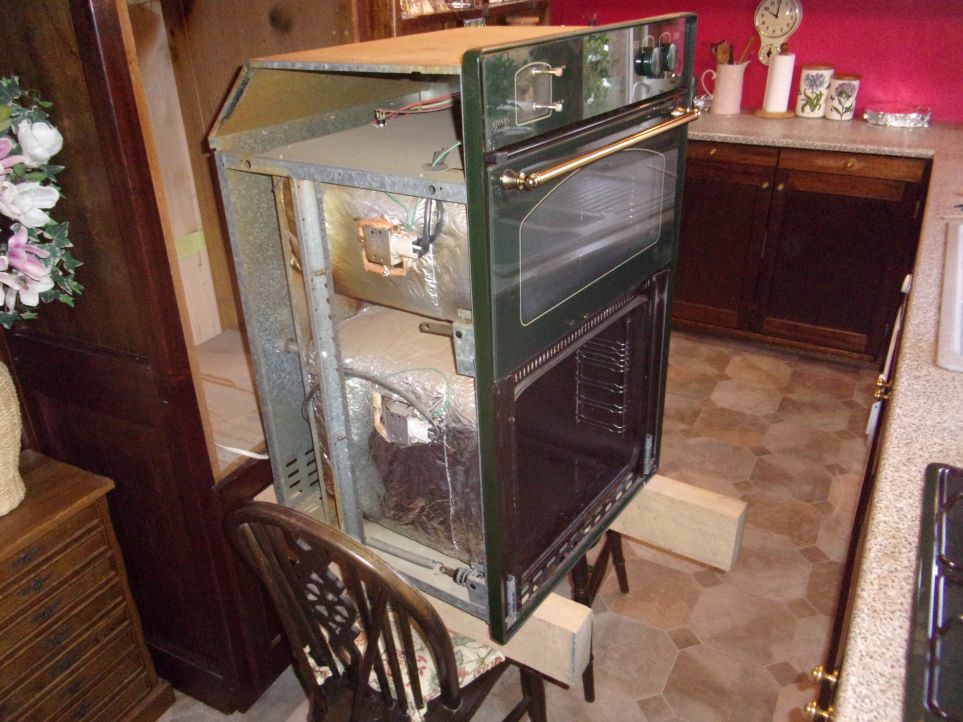 Not the best and definitely not recommended by me for a safe way of supporting the heavy double oven but it did allow access to both sides of the oven whereas on my first attempt I had to lay the oven on its face preventing access to remove the right hand side panel. 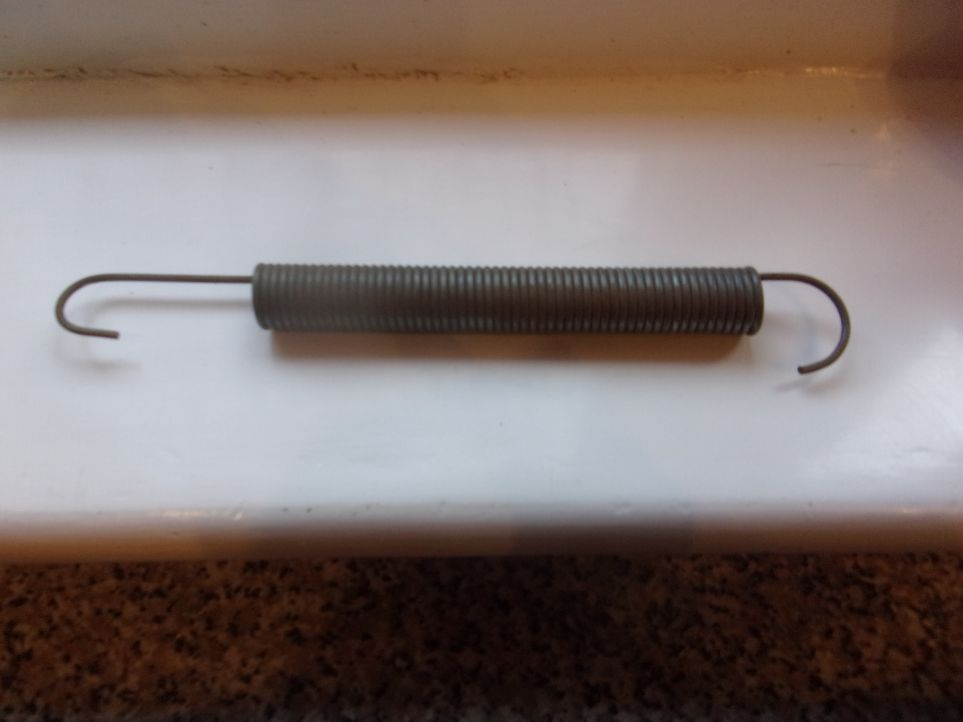 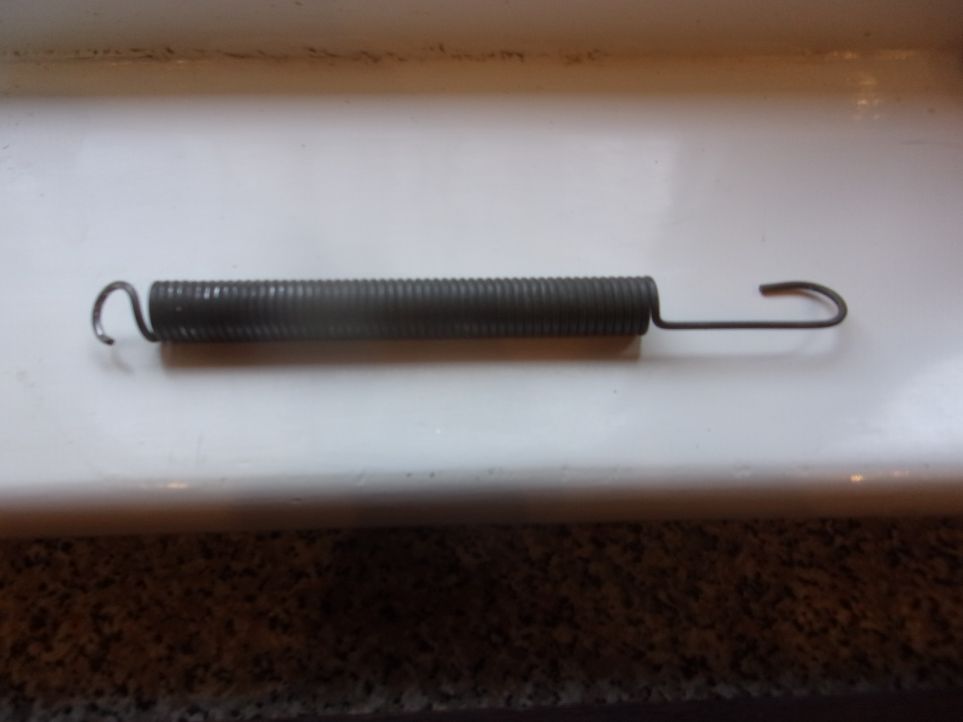 Here's the modified spring which works.

I appreciate I've rambled on regarding just a broken spring but I thought this worth adding in order to prevent others having all the frustration I suffered; lack of working space; poor support to rest the oven on and dire weather conditions made what I now know to be a simple job much more difficult than it needed to be. The actual repair cost nothing other than frustration; the spring I bought is a spare just in case and my lovely wife has recovered from her shock; now what's going to break next?