one last one - planing rosewood with the unicorn edge

I wrote off the unicorn edge as perhaps not that applicable for planes. It protects against impact damage, after all, and who hits their planes? I don't. At least not when planing with them.

But relatively often, i plane mahogany, khaya and rosewood. All three are a joy to plane except for silica.

In testing a $3 iron for a video yesterday, I had a segment of planing rosewood and showed the silica in it. But the iron took no damage. I was confused and didn't include it in the video because I was afraid it may not actually be silica, and I'd be posting a lie. In every case in the past, no matter the iron, this induces small lines on the wood.

So, I did an A/B test today with a 32 degree flat edge on a bench plane, and then the plane unicorn on the second (which is like the chisel version, but be a bit more sparing with the buffer to avoid buffing away all of the clearance). This iron is made of the same thing as PM V11.

First, the 32 degree edge (25 degree bevel, 32 degree microbevel polished to 1 micron diamond, washita back lapping). After planing around 125 feet, the edge had about 25 of these defects in it. The shaving split multiple places and planing was becoming a pain. The first 15 feet or so were dreamy, though. These two defects are about average. They're 1 to 2 thousandths deep. The deepest were about 4-5 thousadths. No line free service will be had with this plane iron until that length is removed from it. It's the same thing as V11, so that happens half as fast as O1. Most people will not get close to removing that much in a typical sharpening cycle. 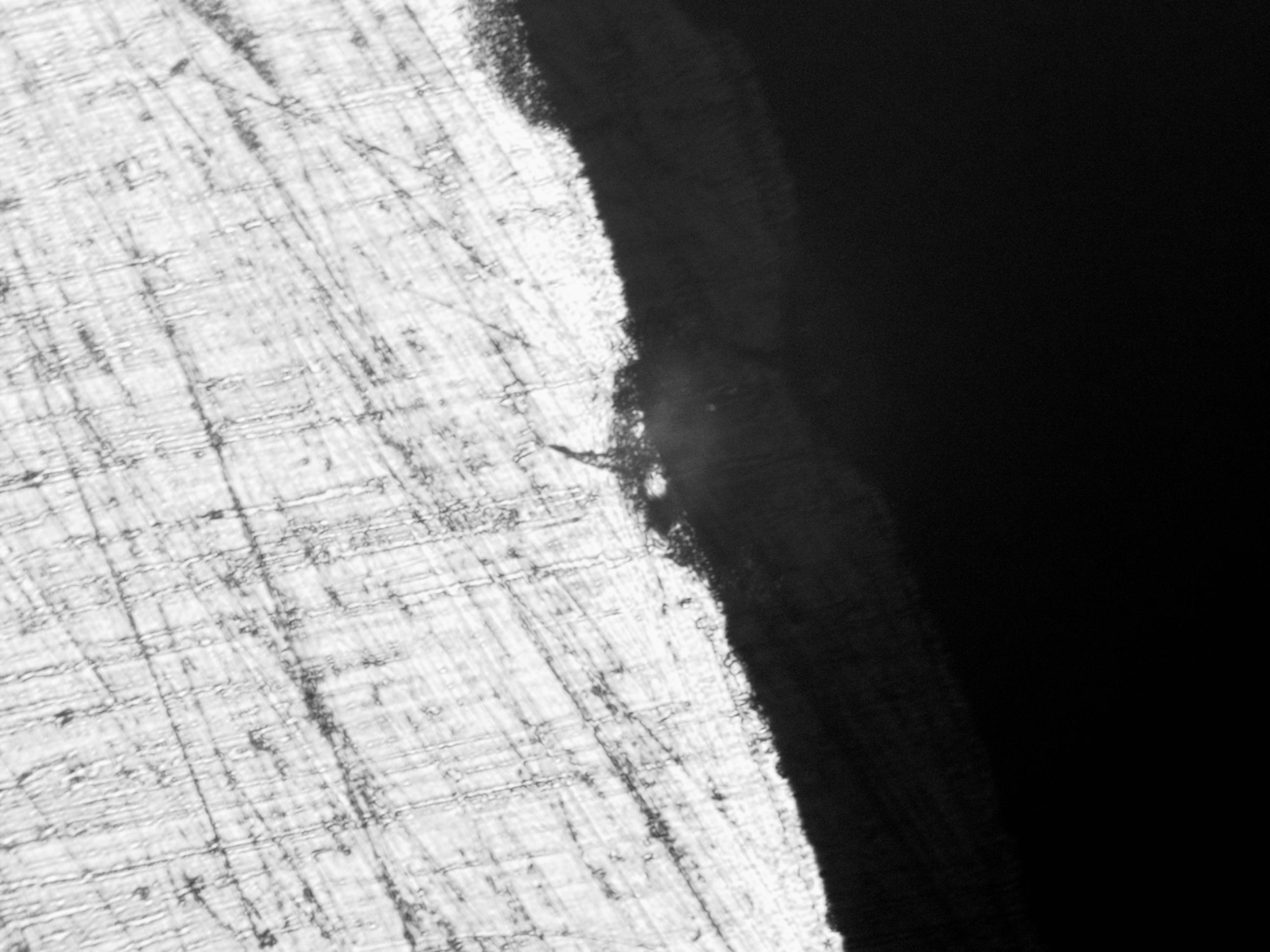 Second, the unicorn test - subjectively, there is a tiny bit of a feel of less clearance. Like you'd get with an iron that's planed about 10-20% of the footage that it will plane before all is said and done. It's not intolerable and the plane still picks up a shaving easily, even on rosewood with runout at the end of the billet. 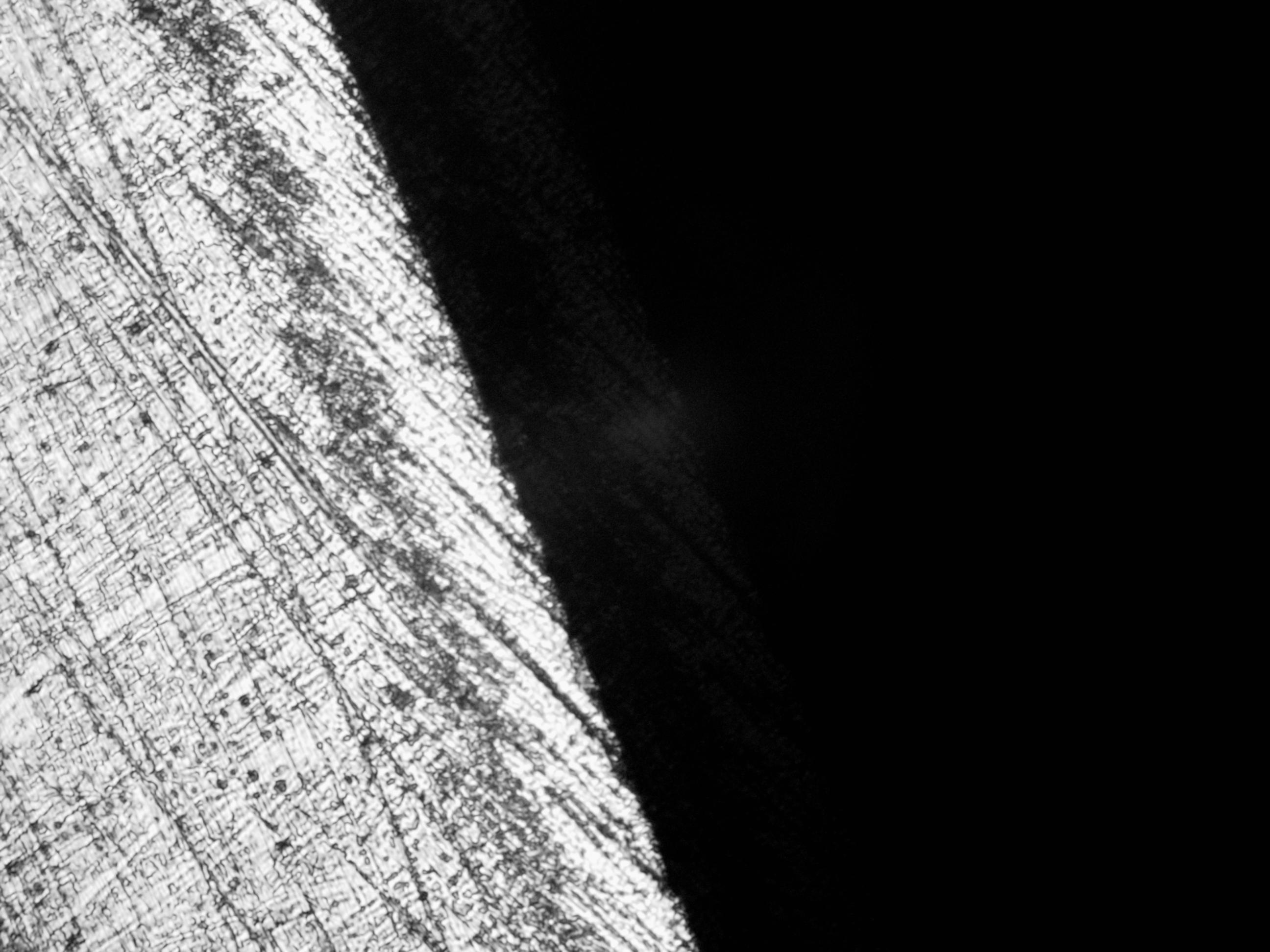 This is the worst of the damage. The volume planed was greatly more because it continued to take a full smooth shaving the entire time.

You can see that the iron's seen more work in the same footage in the second picture based on the burnishing at the cutting edge - that occurs when a shaving stays together and is pressed back into the iron by the cap iron. If the shaving comes apart, it just goes all over the place and has no structure (that occurs with the little damages all over the edge as pictured above).

This is a picture of the last shaving with each sharpening method:

Flat bevel on the left (only 125 feet in rosewood, but the damage from the silica adds up quickly and separates the edge's effort), and unicorn bevel on the right (which would've planed for a very long time): 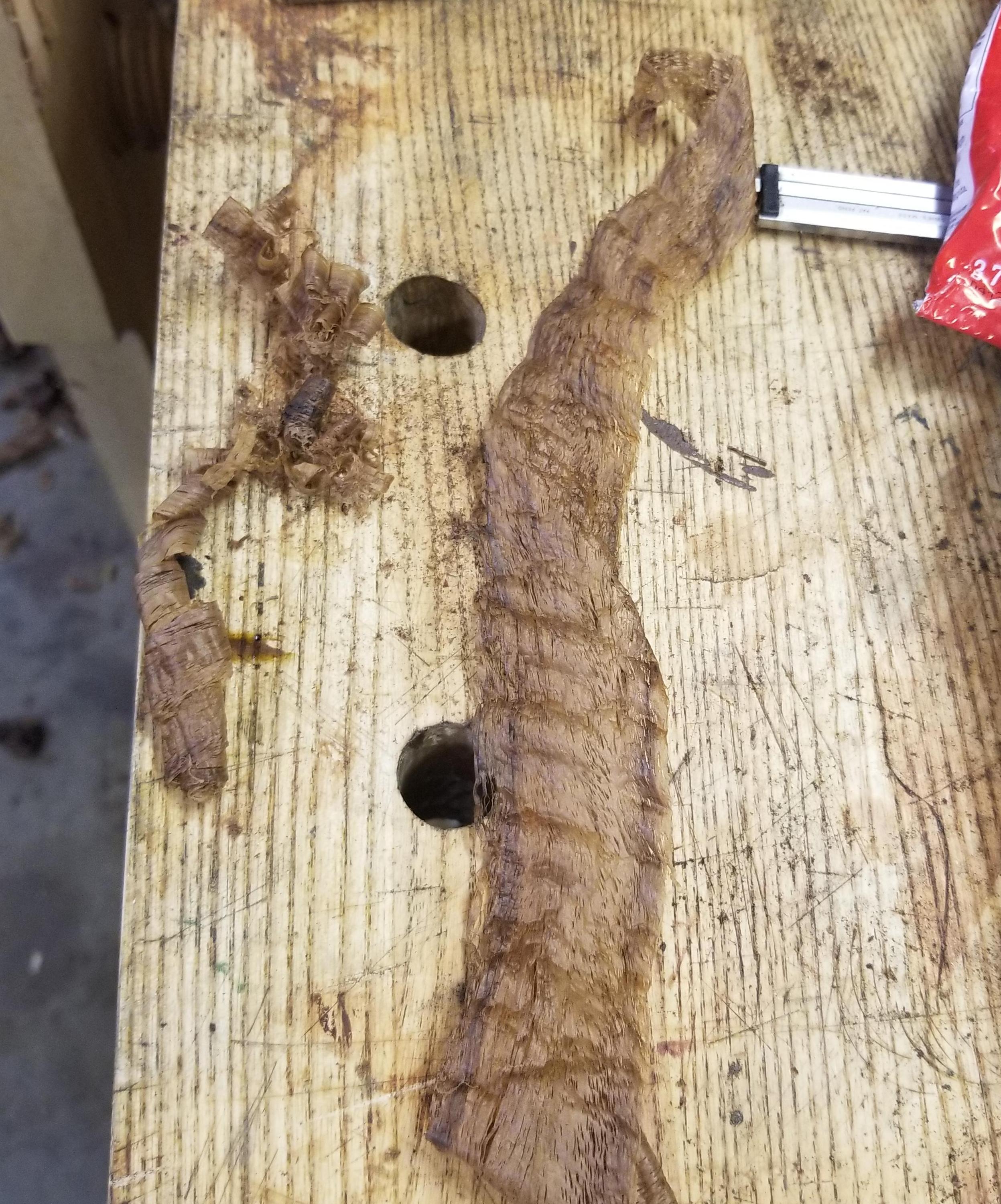 The small damages on the unicorn edge appear at the termination of deep scratches. I probably need to clean off my washita stone (just wipe it with a paper towel).

It's likely that what looks like damage is just due to the lack of metal at the scratches and the fact that wear will occur around scratches faster than the rest of the edge (the metal beside the scratch has no lateral support).
D

separate test planing clean hard maple - theory being in clean wood, we've buffed out some of the clearance and should see less edge life.

Only one test so far (planing feet and weight of maple). That turned out to be true. In clean wood, we do trade some of the edge life vs. a finely sharpened flat edge.

The question with either in clean wood is how much do you value not having any marks in your planed surface. I value it a lot on a smoother. In other planes, less.

The measured difference so far, about the same in weight and shaving length (weight used as a check that the length is representative of work done in case each edge doesn't pick up shavings as efficiently or the test man is bad at keeping the test fair).

That is, the unicorned edge lasts about 80% as long as a 32 degree flat-honed edge on hard maple. The measures of distance and weight are both in the ball park of that.

The unicorned edge runs out of clearance before there's any edge damage or dull feeling like you'd normally perceive. Instead, if there's runout or odd grain, the plane starts to skate across it with a fine shaving.

So, that's our trade off. Protective of the edge in less than ideal work, we give up some duration between sharpenings in perfect wood.

(the above test assumes that you use a really fine sharpening media, too. If you use something like a middle stone and then strop, you are giving up the difference in edge life above already and the unicorn applied properly won't cost you any edge life).
You must log in or register to reply here.