I was given this old folding rule/spirit level years ago and it languished in a drawer until, the other day, it caught my eye and I thought I'd give it a slight smarten up and get the thing folding and unfolding. It really is a lovely thing and there is something tactile about wood and brass. The only fault in it's manufacture seems to be that the angle on the built-in protractor is slightly out which is rather surprising given the quality of the rest of it. I'm not missing something am I - it can't be adjusted can it? It looks like a pin at the bottom. Anyway, despite this, it gives me an inkling into the quality of tools in days gone by. Can anyone date this please? 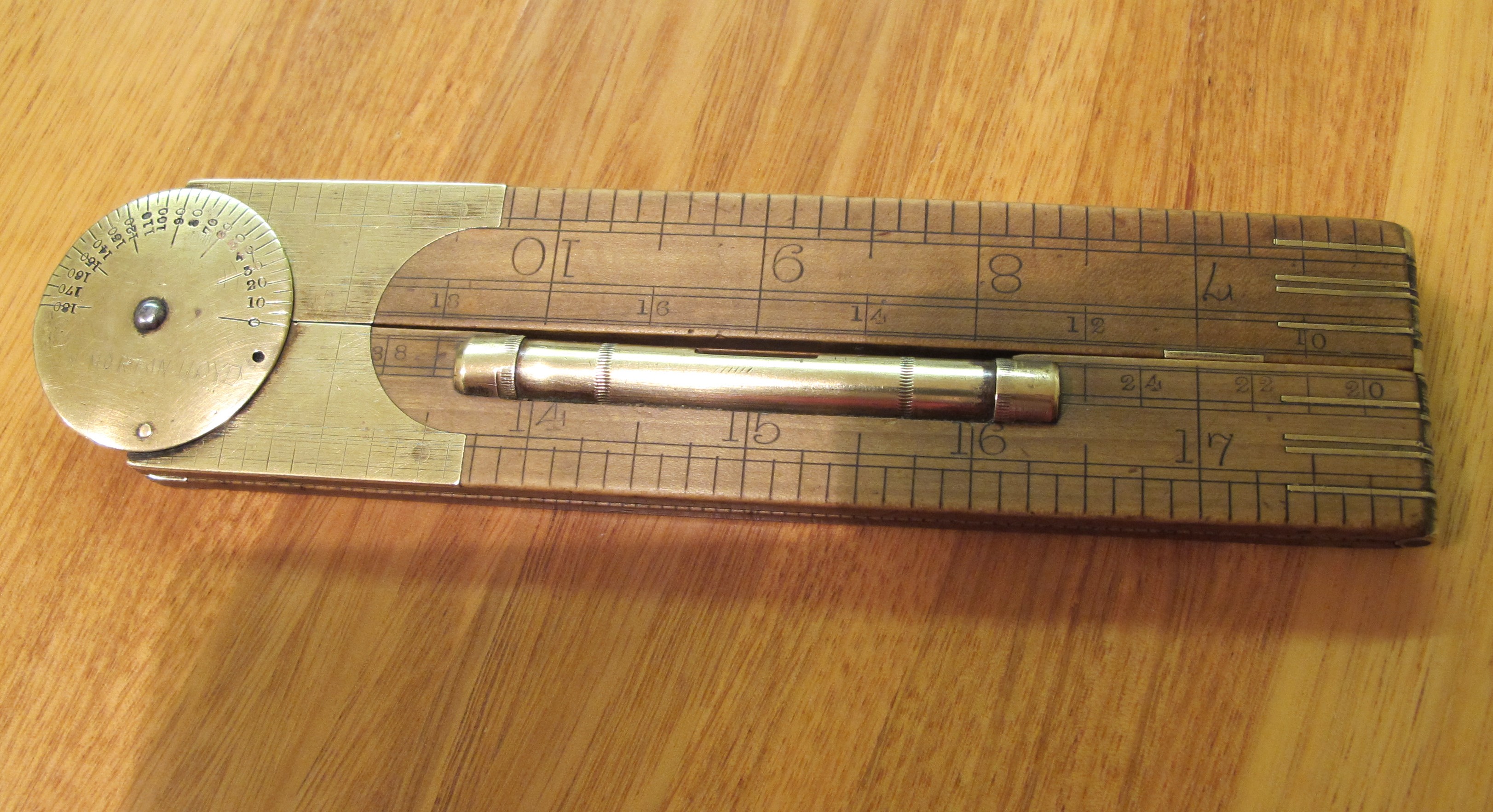 All that I can find are these.

I'm sure Andy will be along before too long though.

If It just said Rabone, Then it is pre 1963. https://www.gracesguide.co.uk/Rabone_Chesterman

Not wanting to disappoint Richard, or Nigel, this is all I can offer.

I agree that it's a model 1190 - the combination of a protractor and a spirit level is fairly distinctive. I can see from catalogues that the 1190 was offered in 2 and 3 foot versions.

The Rabone company was founded in 1784. In 1871 it moved from Birmingham to nearby Hockley Abbey. They used the Hockley Abbey name and a triple triangle trade mark from that time.

They continued trading for a long time, dominating the market for boxwood rules. The next easy date for dating old tools is 1963 when they merged with Chesterman to form Rabone Chesterman - but it's obvious that your rule is older than that.

As the listings on the Worthpoint site show, this model exists with a plain semi-circle style of arch and also with a more elegant double curve. I don't know which is earlier and which later though it seems likely that yours would be later, since designs like this tended to be simplified rather than made more elaborate.

Looking for the 1190 in catalogues is a bit frustrating. There's an 187 catalogue scanned by Google but as far as I can see it's not in there.

The 1938 Marples catalogue has a large section devoted to Rabone rules which by that time were being distributed by Marples. It's in there, at 68 s per dozen, with the same plainer style of arch as yours.

It's still there in 1959, but with the double curved arch. 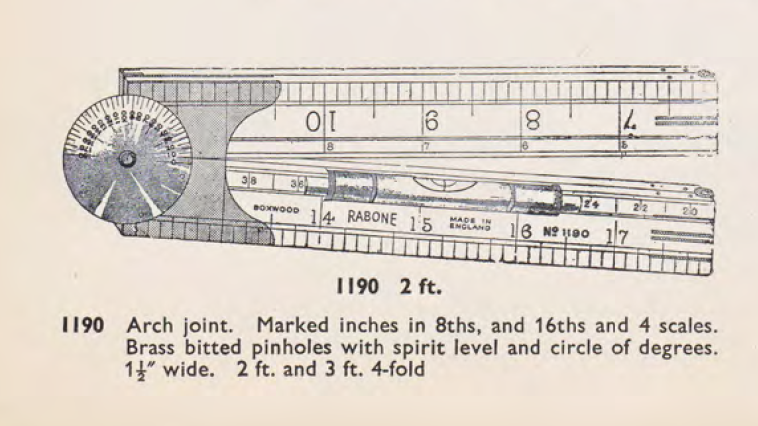 So it's hard to be certain, but it looks like this model had quite a long time span when it was available, and wasn't one of the seriously rare models but a useful one worth including in general merchants' lists.

I don't really know which arch style was earlier but I do know that catalogues are not a foolproof guide - old picture blocks got re-used for decades if they were near enough to give the general appearance of a tool.

Looking at your photo closely, there are two dots on the protractor. Both should have fixing pins in. It looks like the upper one is missing and I wonder if the other is broken? That would let the disc twist round so, as you say, it's not in proper alignment.

Even with that damage, it's a nice thing to have. Do you have more photos, showing any maker's markings?

Edited to add: I see from Bourbon's link that it's still there in the 1964 Buck and Hickman catalogue, but now at the shocking price of 21s 9d. 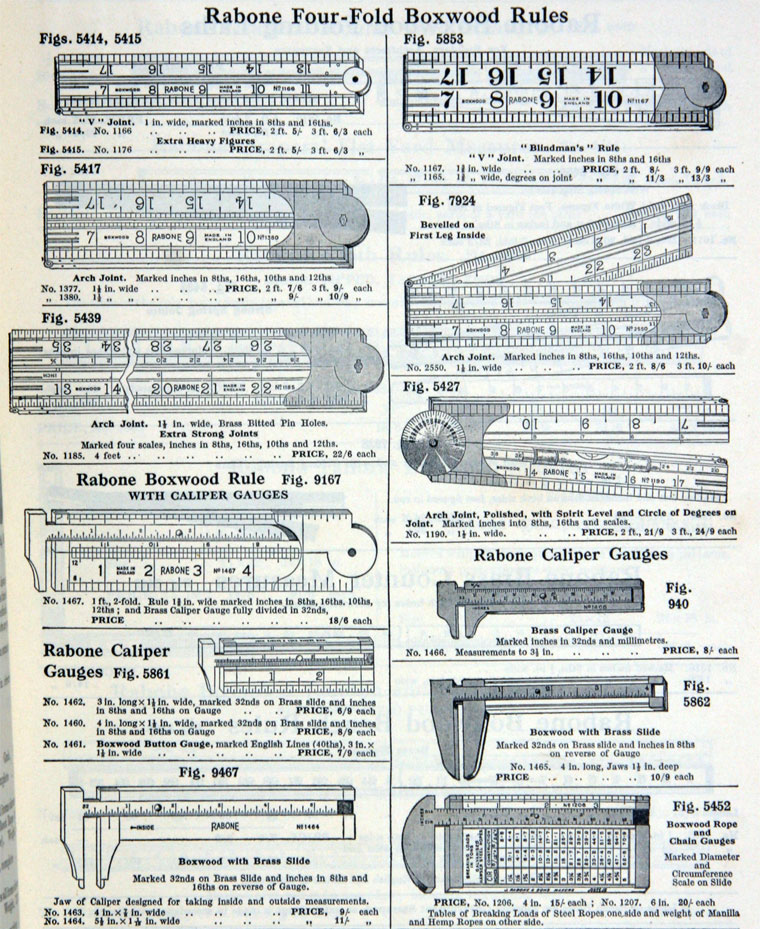 Wow, many thanks for all that info everyone - Andy, not disappointed at all. I could take more photos but the markings say J.Rabone & sons Birmingham England Warran Best Boxwood on the inside of the rule when folded - nothing else. No reference to Hockley Abbey. On closer inspection, I can get a 0.05 mm feeler gauge between the protractor dial and brass behind it. The lower pin is definitely intact so I wonder if someone has tried removing one of the pins in an attempt to rotate the dial to align it but has given up. So, maybe the misalignment was from new. Shame really as if it was lined up, I'd probably find the occasional use for it as an approximate angle check. As it is, I'll probably just admire it now and again - it's too confusing to add ~3° to each measurement.

Anyway, from your description, it is later than 1877 but before the Hockley Abbey marking made it onto this product .

My Mom worked there in the '50's. As far as I know, she worked printing the numbers onto steel rulers. The machine she worked on is in Birmingham Museum. she upset a curator when she told him there were bits missing off it!

Bourbon, you can probably confirm what I have been told, that the firms making boxwood rules set up in the 19th century with the classic 'division of labour' route to efficiency, where each step was done by different hands, then passed on through the factory.
And that's about where they stayed - never really shifting into machine production.
One side effect was that there was no incentive to remove old lines from the catalogue. If someone wanted to order an obscure design in, say, the 1950s, they still had the patterns from 50 years or more earlier and people able to make them.

Unsold stock was kept too. I have a couple of unfinished rules from the Smallwood factory, marked out in French inches, still there when the factory closed, not so long ago.

Oops - I need to correct myself here - Rabones did introduce steam power and machinery, in the 1840s, to meet competition from America.
I've found a long letter from John Rabone to the Birmingham Daily Press where he bemoans the opposition to machinery from the apprentices and trained hands and describes how he was literally stabbed in the back with a sharpened turnscrew by one employee who thought the machinery threatened his livelihood.

in the '70s I saw a box of Rabone Chesterman (they merged and consolidated into the Sheffield works on Ecclesall Rd) of this type (angles marked, spirit level, slightly less fancy joint), selling for peanuts at a market stall - because the box wood had warped - I bought some hoping to 'unwarp' put them under weights in a damp place etc etc - still have two
somewhere - now looking much older but still warped -any tips for unwarping box - heat??
You must log in or register to reply here.
Share:
Facebook Twitter Reddit Pinterest Tumblr WhatsApp Email Link