I've put this up because I thought it might be of interest as an example of learning in progress. I decided to make a tray, to my own design, from some offcuts and perhaps got a bit over-ambitious by angling the ends. The first attempt was such a mess that I scrapped it. This is the second, not really acceptable, version. It's OK in the sense that it will function as a tray but more likely one for taking potted plants into the garden as opposed to serving up tea on the patio.

The chief problem was, naturally, the dovetails. I found that the ones which I marked with a knife ended up very gappy and I had to spend a couple of hours paring thin wedges with which to close the gaps. Those which I marked with a pencil were much more successful with a couple of them being perfect. The handles, which I really should have curved, were also a challenge because in order to be horizontal, they have to go in at an angle to the ends. I actually got that done without too much difficulty and I've become moderately good at accurately planing angles along long edges. The spoke shave work on the tops of the ends is a mess (see pics) and is something that I clearly have to work at.

The positive thing is that I reckon the third attempt will be much more acceptable. The wood is American Poplar (greenish wood for the ends and whitish for the sides) and 6 mm oak veneered ply for the base. The handles are cherry. 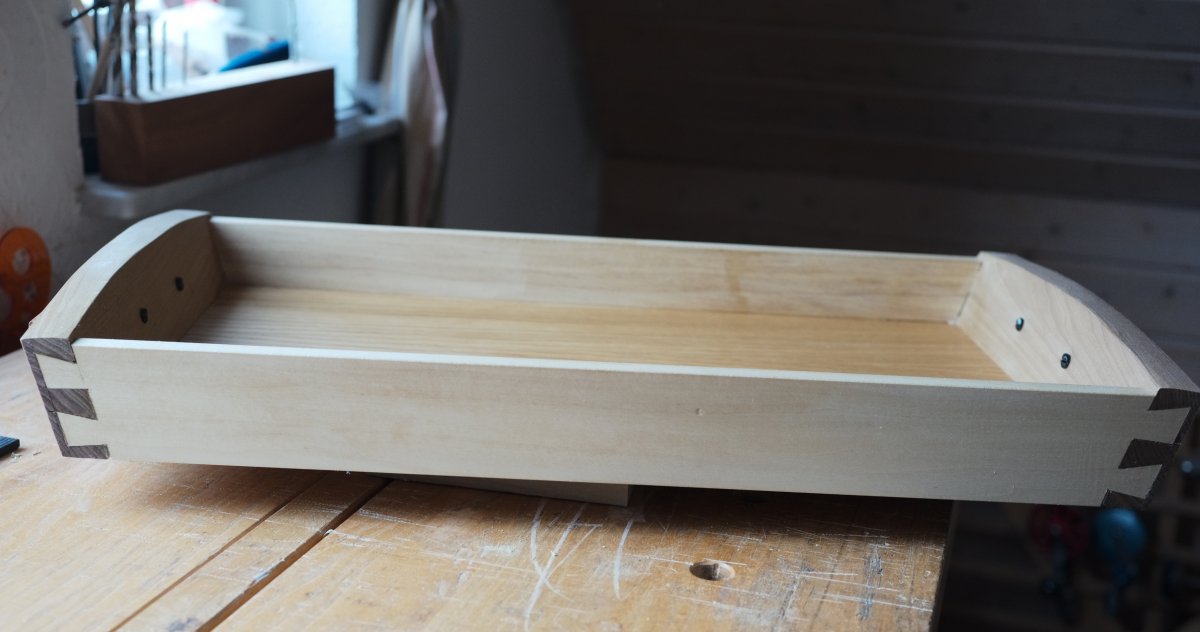 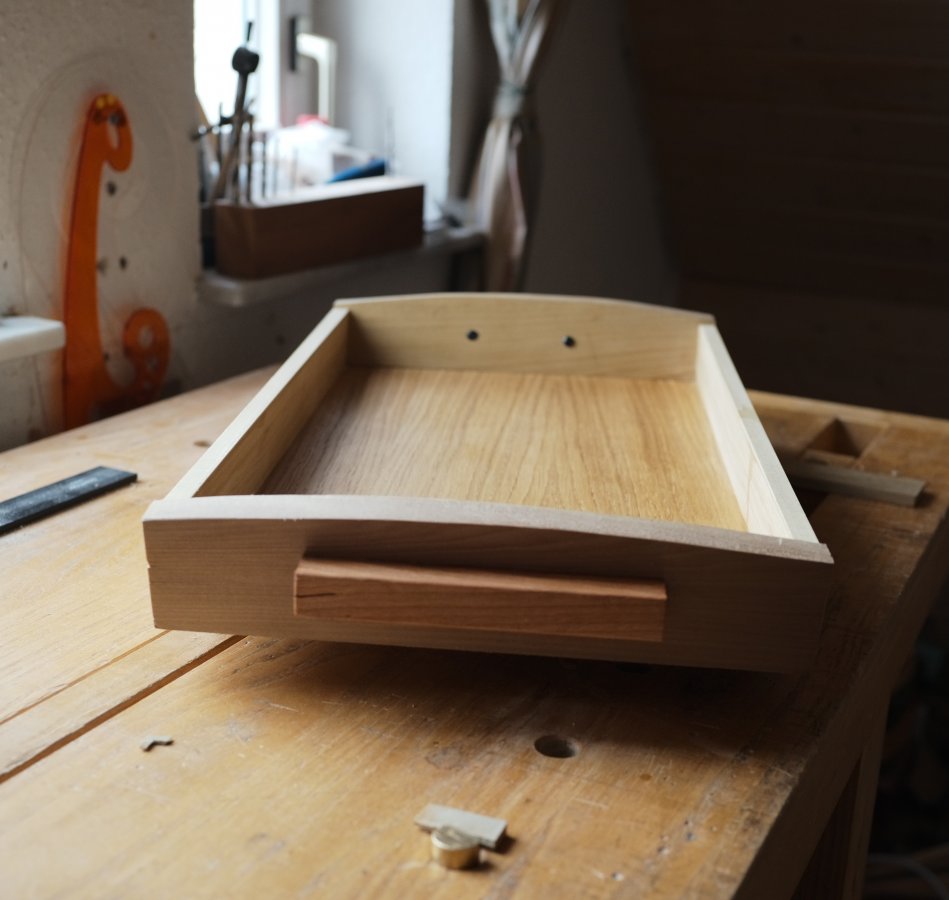 Comments and criticism are welcome. (Ignore the chip on the end at the left in the lower picture - I slipped with a chisel.)
Last edited: 20 Dec 2020

I can’t even get a straight dovetail to turn out okish, let alone an angled one! Think it’s great.

I like the shape and contrasting woods. I think a routered handle as a part of the ends would be easier, and eliminate the screws which I think detract from the handmade nature of the piece.

Very nice. You could always sink & plug those screws...

Angled dovetails! Nice work. As the maker you’ll naturally have a more critical eye and also see the mistakes more obviously because you know they’re there.

I struggled with using a spokeshave too, definitely one of those things that needs hours of practice with.

That is a very good second attempt. My main suggestion would be use much thinner material. It will keep the weight down and make the tray far more elegant and easier to handle. I too would hide the screw holes. Looks nice - good job on the joints.
P

The dovetails look better than any I've ever made, and I would never even attempt them at an angle, nice work.
A

Thanks for the comments but I think you're all being too forgiving.

The screws only went in because although the handles did glue in nicely, I wasn't too sure if the glue surface was big enough. They don't look too bad in the flesh because they're slotted and I've made sure that all slots are orientated the same. I think I might be able to get around that altogether in Version 3 if I have much higher ends and simply cut hand holes into them.

AJB: the sides are 1/2". I could probably make the ends a fair bit thinner. The reason they're thick is that I wanted sufficient depth for the groove which holds the bottom. Because the groove, being horizontal, is at an angle to the ends it offers its depth minus a certain amount for holding the bottom, so I think that come what may, the ends will always have to be thicker than the sides. If there's one thing I've learned it is that angling one component has lots of knock on effects. Incidentally, I was pleased to discover that cutting the groove in the ends at an angle is dead easy with a plough plane.
Last edited: 29 Dec 2020

Have you learned anything from the build? If so, whatever mistakes you think you made have had a benefit.
B

Looks good to me

OK. If you want to elevate it to the next level then the sides need to be 3/8" at most and the ends ideally 3/8" too, maximum 1/2". It's a tray and will not need to carry really heavy weights. I assume you gave slotted all around for the bottom. It does not need a huge rebate if you are using a stable material such as ply for the base, and you can also add some reinforcing blocks below if you feel it is needed.

I would redesign the handles completely and make them more elegant, perhaps emulating the arch of the top, and not having squared off ends. Make them less chunky. Maybe pin through in wood to emulate your dovetail contrast.

For a second attempt I would be really chuffed with that. I have made three or four boxes and there's always a gappy dovetail somewhere. Getting better though with practice.

Wow yeah I’d be pleased with that. Looks great, if the next attempt is aiming to be an improvement on that will be brilliant
C

That looks very good to me. Very good. I'm feeling rather guilty, at present, because I keep buying stuff and have hardly done anything with it. If I'd made that I'd be pretty chuffed. Be proud.

looks good to me as well, I'd be happy with that.
C

Anyone who perseveres to the end of a difficult project like that should feel very proud of themselves.