(Not so good) vibrations

I started a thread about making a stay for the lathe over in the metalwork section of the forum but don't want to keep bothering those nice people with my problems, so I'll try to bother my fellow turners instead! A wooden stay under the banjo/ tool rest does a fair job of stopping the vibrations I sometimes experience when I have the large bowl extension fitted. But the more I think about it, the more that might be just one part of the problem.

SVB's link to Stuart Batty's videos got me thinking about my technique and how that could be causing issues, so I had a go yesterday on a small bowl. Funnily enough, using the push rather than pull strokes and minimal pressure on the bevel as he does resulted in even worse bumping on the outside of the bowl, but I'm sure that's down to changing method - it's a bit like starting again, and I'll persevere with it.
Then the lathe stopped working! It was the same problem I posted about ages ago, which turned out to be a dodgy connection in the switch. Now sorted again.

Sooo - this morning, I decided to try to address things that could be causing the vibrations.
First I levelled the lathe (the floor's far from level) using blocks and shims that I plan to replace with single blocks (the shims feel like they could move). This took ages and was pretty frustrating - changing the height of one foot affected the others that I'd already sorted, that kind of thing.
That done, I loaded some sandbags onto the lathe. They don't look pretty, but they do seem to make it more stable. In the course of fiddling with the feet to get level, I noticed how little effort it was to lift the end of the lathe that didn't have the tailstock above. If it's that easy to lift in comparison to the headstock end, could it be contributing to vibration?
Finally, I cut a piece of wood to the exact length for the stay, which is easier to remove and refit that the old one (which was too long) - though at some point I do want to try to make up a metal, adjustable one.

Here it is in all its sandy bin bag glory: 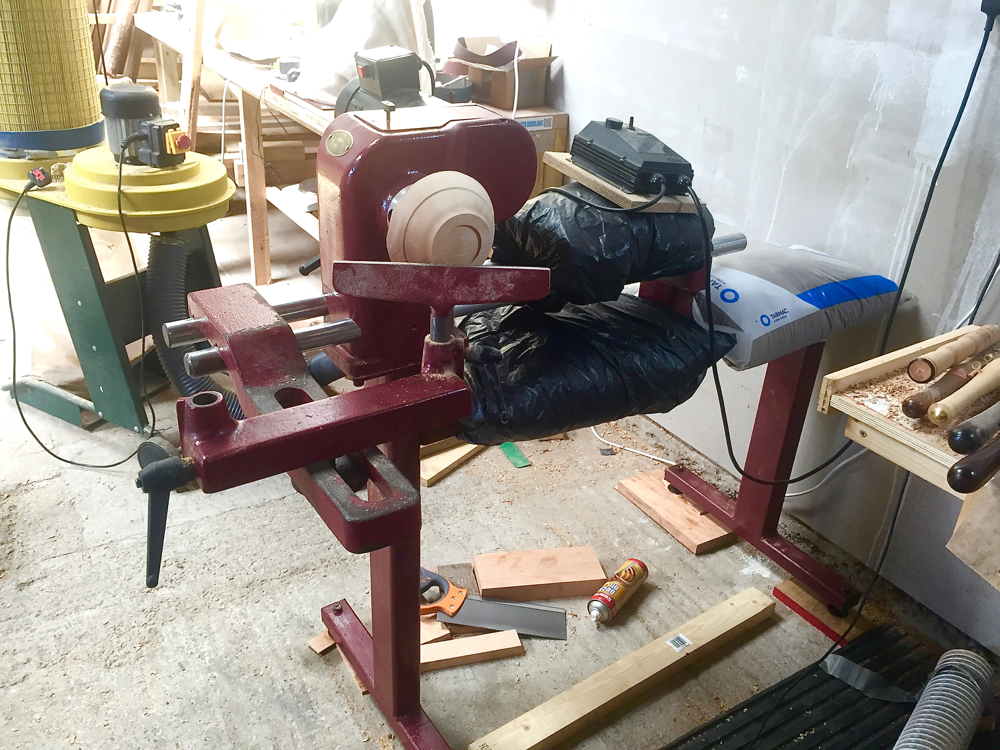 I've written all this because I'm really just trying to sort things and would really appreciate any thoughts on whether what I'm doing is right, or not. It seems to be far better than it was, but I'm now confusing things by trying to change my turning technique at the same time!
Thanks
C

First thoughts:
is it bolted to the floor? if not bolt it down.
and secondly the age old 'are your tools sharp enough'?

I suspect your prime problem is the single square section pillars of the stand each end.
Followed by the spreader 'feet' bars.

Try bracing the frame with some square tube or angle to make a rigid A frame, either bolted or welded.
You could just temporarily use G clamps or similar to prove the point. 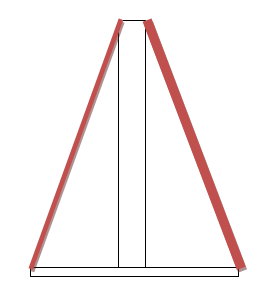 In the metal side of the forum you have your stay sitting on / partially on a rubber floor mat. Have you moved the mat so the post in hard on the floor?

Is the lathe made of hollow box section ? If so I suggest there is insufficient stiffness and self weight. Adding sand bags or similar will get over the low self weight, but I think you are stuck with the lack of stiffness. The best answer is to do spindle turning if you can rather than bowl turning.

Nev - I've not bolted it down, but will if it's going to help. I did search online but couldn't figure if that's normal/ best practice. I like having the adjustable feet but once it's level using blocks, that'd not be an issue. And yes, I keep tools sharp so I don't think it's going to be that - but it could well be poor technique in using the tools, something I keep working on.

Chas - maybe what you've suggested could go some way to resolving what Brian wrote - it might improve overall stiffness? I'd certainly make those adaptations - though it feels slightly painful to start drilling/ welding into the frame - but if it'll improve things I'll do it, if less 'invasive' fixes don't work.

Brian - yes, the stand is hollow box section rather than solid, but it's heavy (not that I have much to compare it to). (edit - I just checked in the handbook, the stand weighs 41.5 Kg and the lathe itself weighs 78 Kg.)

Pete - yes, I chopped a piece out of the rubber mat before cutting the stay to length, so it's now straight onto concrete.

My feeling is that the issue lies somewhere between poor technique and the large bowl extension - I'm trying to make the rest of the lathe as stable as possible just so I can eliminate them as causes/ contributors.
When it happens, vibration normally occurs on deeper cuts only, and usually as I approach the centre from the rim of a bowl when turning the inside, but sometimes on the outside curve of a bowl. It doesn't normally occur on finer cuts (but it does sometimes), and I've never seen the lathe itself vibrate tho I've looked as I'm turning. ('Take finer cuts' is one answer, but it really slows things down.)

I've only had a brief try with it as setup today, but plan to work on it properly tomorrow. Maybe I need to forget Stuart Batty's methods for the day and stick to those I've been working til now so I have one less variable.

Thanks again everyone - I've made a start and if problems persist have ideas where to go next.

Chris152":jce9sixt said:
….
When it happens, vibration normally occurs on deeper cuts only, and usually as I approach the centre from the rim of a bowl when turning the inside, but sometimes on the outside curve of a bowl. It doesn't normally occur on finer cuts (but it does sometimes), and I've never seen the lathe itself vibrate tho I've looked as I'm turning. ('Take finer cuts' is one answer, but it really slows things down.)
Click to expand...

That sounds very much like poor technique and lack of correct bevel support causing the tool to chatter, alternately dive into the wood and ride back out similar to multiple and rapid repeated catches.

As you get near the centre of any bowl with reasonable depth using simple nose angle grinds you need to change to a tool with a steeper front bevel to maintain correct bevel contact. 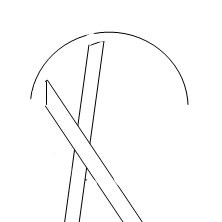 If you are getting it on the outside of the bowl then you are not adjusting the rotational and presentational angle of the tool to follow the curve adequately and keep the required bevel contact.

If you rely purely on your hands for control then the flexible nature of your fingers allows the tool to 'vibrate' for want of a better word. (You see this with a metal lathe if the toolpost is not rigid enough)

CHJ":2bctcdrr said:
That sounds very much like poor technique and lack of correct bevel support causing the tool to chatter
Click to expand...

I think you're quite probably right, Chas - at least in the largest part (I want to be able to blame the lathe at least just a little; what is it they say about bad workmen?).
I maintain bevel contact throughout shaping cuts, but I'm pretty sure I've been putting too much pressure on the bevel (hence my interest in Stuart Batty's video).


CHJ":2bctcdrr said:
As you get near the centre of any bowl with reasonable depth using simple nose angle grinds you need to change to a tool with a steeper front bevel to maintain correct bevel contact.
Click to expand...

I'm working on shallow bowls/ platters, and the gouge is ground to 50 degrees according to the sorby guide. I use the same gouge throughout (1/2 inch) and toward the centre, the handle is well bedded into my side as I move my body to the furthest left position I can achieve (if that makes sense).

But - as I don't generally get the vibration problem with lighter cuts, would that suggest it might also be to do with the lathe struggling under greater load than just poor technique? Maybe I'm being more careless when removing wood more quickly and creating the problem.

I spoke with a fellow member who does tuition last summer - maybe the money I might spend working on the lathe would be better spent having someone help sort my technique.

Thank you, Chas - I really appreciate your thoughts.
C

Update: Speed and technique! Oh, and getting the banjo on the right position on the extension (which I'd noted in the metalwork thread).

This morning I had a far better time. As I started the switch played up again, so this time I compressed the connectors firmly onto the male parts and, while I was fiddling, changed the belt position from the second slowest pulleys to the middle speed ones. The maximum speed i've been working to was only about 800 rpm ( I can't remember exactly) and it's now about 13/1400 which for smaller bowls is fine. The difference to my turning is huge - I was able to use the push technique as Batty shows it (well, to the best of my ability), and the wood peeled away effortlessly. I'm quite sure I've been pushing too hard on the gouge/ bevel in order to make progress at a reasonable rate in spite of slow speed and in doing so, making a hash of things.

With the banjo not set in its sweet spot (the right side of the tool rest about 1cm to the right of centre of the bowl) I still get vibrations, but I guess getting to know how your kit works is part of the game.

Chris152":2apk3c22 said:
……. I'm quite sure I've been pushing too hard on the gouge/ bevel in order to make progress at a reasonable rate in spite of slow speed and in doing so, making a hash of things.
Click to expand...

Sounds most likely; you should not be providing any significant pressure in the direction of the cut, just enough tangential pressure to keep the bevel in contact with the surface just cut and enough forward movement to advance the cutter to maintain an even shaving thickness.

If you achieve more rapid advancement by additional forward pressure your cutter will keep varying the depth of cut dependant on hard or soft spots in the wood (grain direction) and start the tool 'bouncing back' in your 'flexible' hands. this will compound with any peripheral bounce from different wood densities if you are pressing the bevel too hard into the cut surface.

On the outside of a bowl you will see this as a set of developing, more often than not spiralling, ridges as the tool hunts in and out over the side and end grain or knots.

If you compare this against what happens using a scraper firmly held against the rest and not using bevel support you may see why it can happen as the depth of cut does not rely on the cut surface for a reference.