Some Enid Blyton/Noddy style help required here please - sorry!
I decided that my shed could do with some lighting, so had the bright idea of setting up some solar powered stuff.
I'll give you as many numerical details as I can find, but don't let it fool you that I actually understand any of it!
I bought a 25w panel. There's other spec listed on the back of it - ask if you like.
I bought a length of 12v 5730 SMD LED Strip, and also bought a bog-standard (30amp?)"PWM controller", available for £ mid-teens anywhere. State of the art it will not be...
It has an LED display, a few buttons to access a menu, and a user guide that I think - think - I've eventually figured out.
You end up with + and - cables from panel to controller, ditto from controller to 12v battery, and ditto again to the lights (aka "the load")
(Even I figured that out...so far, so good!)
The controller menu gives various bits of info, courtesy of button pressing.
The first (and main) display shows whether the panel is charging the battery, and apparently also shows the present voltage of the battery.
The next screen shows the "float voltage", which in my ignorance is the figure that you wish the battery voltage to "stay at" (?).
The next two settings are for discharge stop and discharge reconnect. In my Noddy language, if the battery gets drained down to a certain level, it'll stop powering the lights, and only allow them to work again once a(nother) certain level is reached courtesy of the panel upping the power in the battery. (Again, ?)
Going back to the main display, the graphics show the panel, the battery and a light bulb.
Courtesy of another button press, the load symbol can be removed.
Yes, it works. It's not brilliant, but it works. You can just-about read labels of stuff on the shelving, and you won't stub your toes on something on the floor that you'd forgotten about.
It's better than being in the dark...

I've just nipped in to the shed to make a note of controller settings. Even though it's a bit gloomy and dull this morning, the display shows that the panel is indeed charging the battery, and states the battery is at 12.5v. Scrolling through, the float is set at 13.7v, with the cut-off and reconnect values being 11 and 12.6. The bulb/load symbol is showing, and the LED strip is working.
Now here's the bit I don't get... if I scroll through and turn the load symbol off, the LEDs brighten up considerably....I'm not saying it's like a 60w bulb in the house, but significantly brighter than when the load symbol is on!
Why?
What am I not grasping?!

Doubt this will help with the technical details but from a pure energy view point I expect in one scenario it's trying to charge the battery and power the lamp at the same time, whilst in the other case the battery and solar panel are both powering the lamp simultaneously. In the end you must have more power going to the lamp in the second scenario.

But what do I know?

Eminently doable, but not especially cheap.

Then you need panels, and batteries, and a charge controller, and an inheritance.

Cozzer said:
What am I not grasping?!
Click to expand...

I bought a charge controller for a friend, and then had to translate the "English" manual into Greek. I still don't understand what the manual said, or what the controls do, or why, but I can think in Chinese now. Lights on the control panel come on for random reasons; they are not the colour the manual claims they should be, or in the same place, or blink at the frequency suggested. It was a voyage of dicovery, to say the least.

One question: if you remove the controller and connect the lights directly to the battery are they brighter? If so, your controller is limiting power output for some reason. There might even be an explanation as to why in the manual, but it's probably a long shot.

Trainee neophyte said:
One question: if you remove the controller and connect the lights directly to the battery are they brighter? If so, your controller is limiting power output for some reason. There might even be an explanation as to why in the manual, but it's probably a long shot.
Click to expand...

That's a good thought - thank you! Will try it later this eve.
As regards an explanation in the manual, it's written in "Chinglish". Ergo, no chance!

I think they will want €1,000 to connect you to 3 phase, not including any extra cables you might require. This is why I have 3 phase for my solar power system (which outputs directly to the grid) but only single phase for the house.

Your 5 wires are 3 phase: 4 for the power, plus a fifth for the municipal lighting attached to each pole. So near, and yet so far... 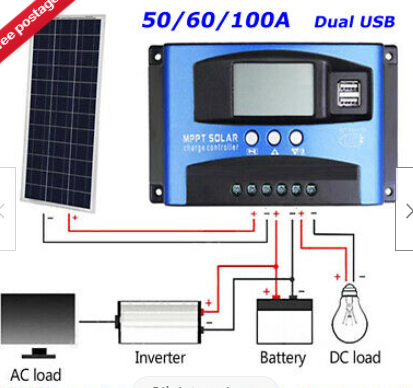 the solar panel does seem a bit on the small side mind so may not last especially in winter months.