Hi. I was rummaging in my shed and found a rusty old No 4 plane on a shelf. Which was quite nice, like finding a ten bob note in the pocket of a rarely worn jacket. It must have come with some job lot won in an Ebay auction and been forgotten. Judging by the smears on the sole and the chunks knocked out of the iron its last outing was probably on some painted wood that was hiding the odd nail or screw. Ouch. 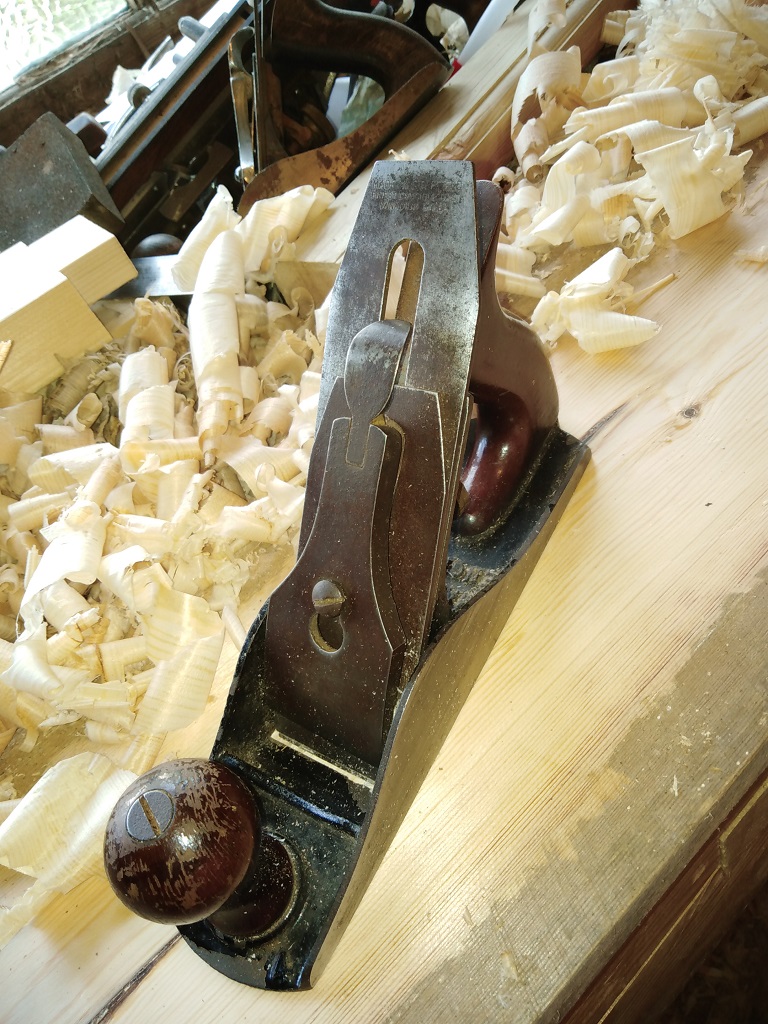 Anyway, I gave it a quick clean and sharpened the iron and it proved to be an excellent plane. However there was absolutely nothing to say who manufactured it the only lettering was 'Made in England' between the frog and the tote and 'No 4' on the nose. There was also nothing on the cap which is plain steel with no sign of being plated. The only other mark is a small capital A stamped on the underside of the chip breaker.

The frog has quite a square top with no screw adjuster and the lever has a heart shaped end folded to a V and the adjusting wheel is small which might suggest an earlyish date.

The iron was a little more interesting. It needed some heavy work on a coarse oil stone to remove the broken edge so I set too at a slightly shallower angle which created a new bevel edge which moved down towards the edge as I removed the metal. After a while this bevel refused to move more than half way. On closer inspection it wasn't a bevel I was seeing but a laminated blade and what looked like the bevel edge was the grind marks in the hard and soft metals having a different appearance. I know some No 4s had laminated irons but it wasn't that common. The top of the iron was stamped with 'MADE IN SHEFFIELD' and 'FINEST CRUCIBLE CAST VANADIUM STEEL' but again no manufacturers name.

I have no idea if all the parts belong together or if it's a mix and match jobbie. Certainly the tote is a slightly different colour to the knob and is far less battered so that has probably been replaced. It feels noticeably lighter than my other No 4s with a thinner casting on the body but in the little I've used it it is probably my favourite.

So if anyone can come up with a maker and date of manufacture or even hazard a guess I would be most interested. I have tried a few plane identification sites without finding an exact match.

Interesting - I'm not a plane geek, but there were various makers in England who made such planes, including the economy brands 'Acorn' 'Dronfield' and 'Chapman' all made in the Dronfield area near where I live (it's on the outskirts of Sheffield).

The blade sounds the most interesting: 'cast steel' suggests preWW1 but Vanadium suggests later and laminating had by then died down -- here's a long shot: the large hand tool maker/supplier Ward had a swansong before fading away in the '60s - the luxurious 'Aristocrat' Chisels, but also High Speed Steel bladed chisels and a welded plane blade with a 'high speed steel' cutting edge - if the vanadium content was high enough or there was also tungsten or molybdenum, this would make an HSS. But then why no Wards name - they usually stamped this large?
R

That's interesting, thanks. I've heard of Ward Chisels but didn't know they made planes and Dronfield and Chapman are entirely new to me. I will explore further. Interesting info on the steel too.
R

Following up on your information on the iron, another possibility is WS Tools of Birmingham which became part of Woden. They made a feature of using crucible cast Sheffield steel blades but the rather indistinct pictures from their catalogue shows their logo on the lever cap.

I think you'll find "cast steel" was used much later than that.
D

true - I was generalising, but never seen Vanadium cast steel on a laminated blade, but that's just me. (Seen Boracic and Electro cast steel).

ps - wasn't suggesting it was a Ward's plane, although they put their name on many tools, but they were very big in plane blade making
B

Best I can say, it's not a WS.
http://www.wstoolsbirmingham.com/
Gives what is known about WS.

Well, I've pretty much drawn a blank. There was a 5 1/2 plane with quite a few similarities and a blade with an identical stamp on another forum. But no one could identify that either. I shall have to accept it will remain shrouded in mystery for the time being and just enjoy using it. Many thanks for your replies.
You must log in or register to reply here.