A few years ago I built a small workshop in the garden using the very helpful plans posted by Mike G. The workshop was built under an attractive old cedar tree . Yesterday morning we were woken at 6.15 by what sounded like a very loud burst of machine gun fire and on investigation we were very sad to discover that the trree had partially collapsed although fortunately the debris just missed the workshop. 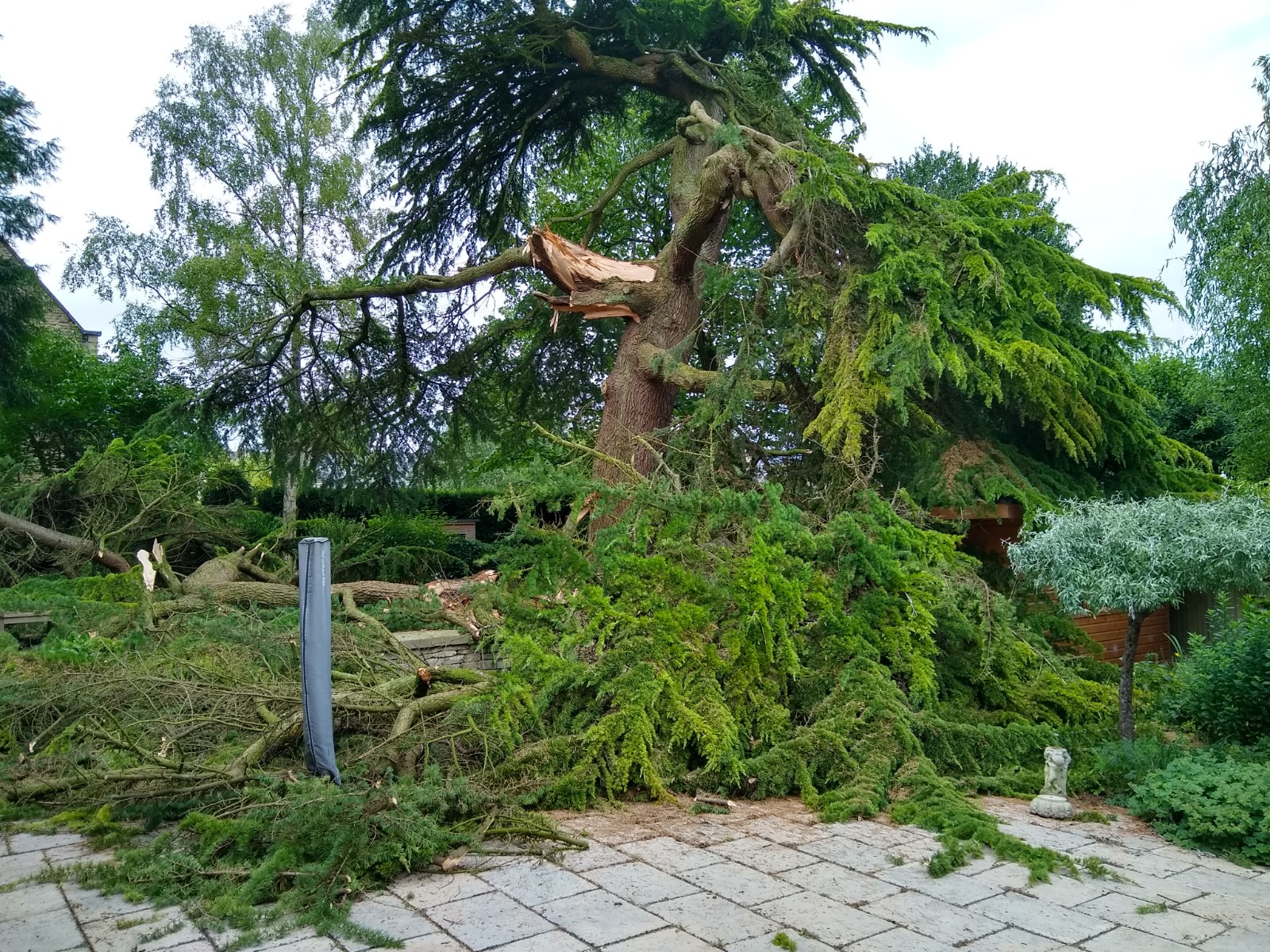 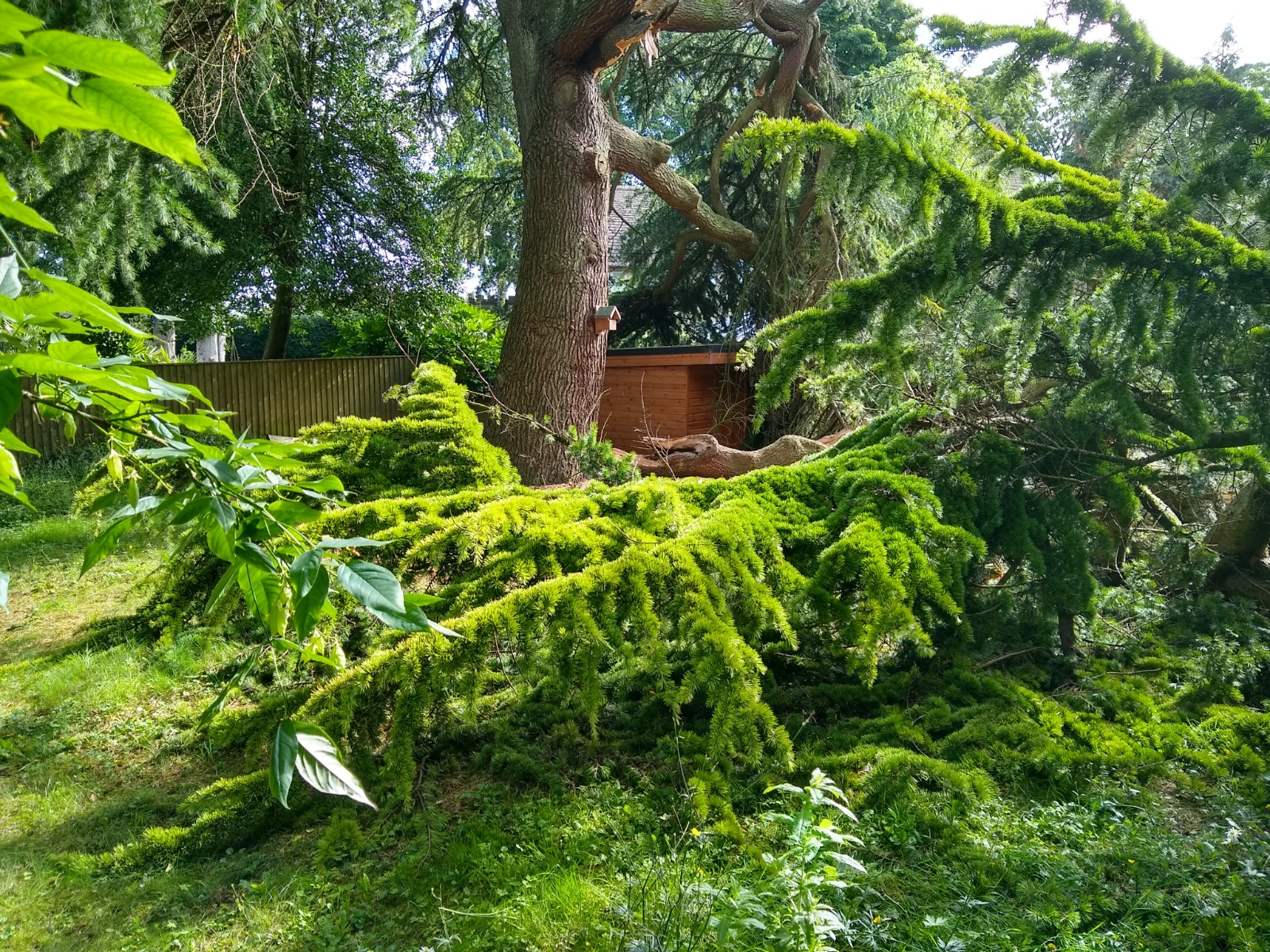 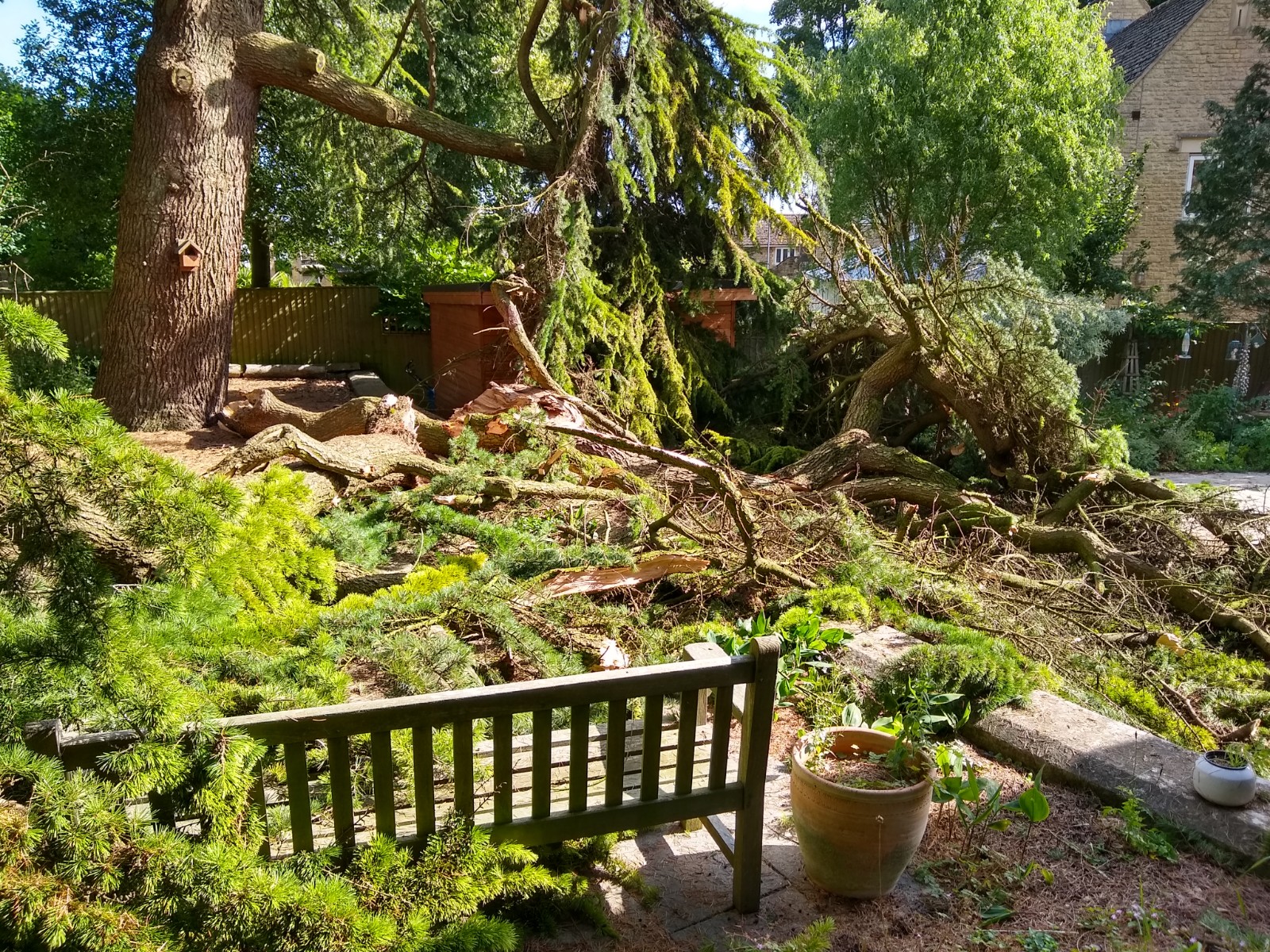 On investigation it became clear that another bough had fractured and that there was a good chance that this could collapse and effectively destroy the workshop so we called out a local tree surgeon to (carefully) remove the broken branches. This is now taking place.
It is not very clear but you can see the fractured bough in the next photograph. 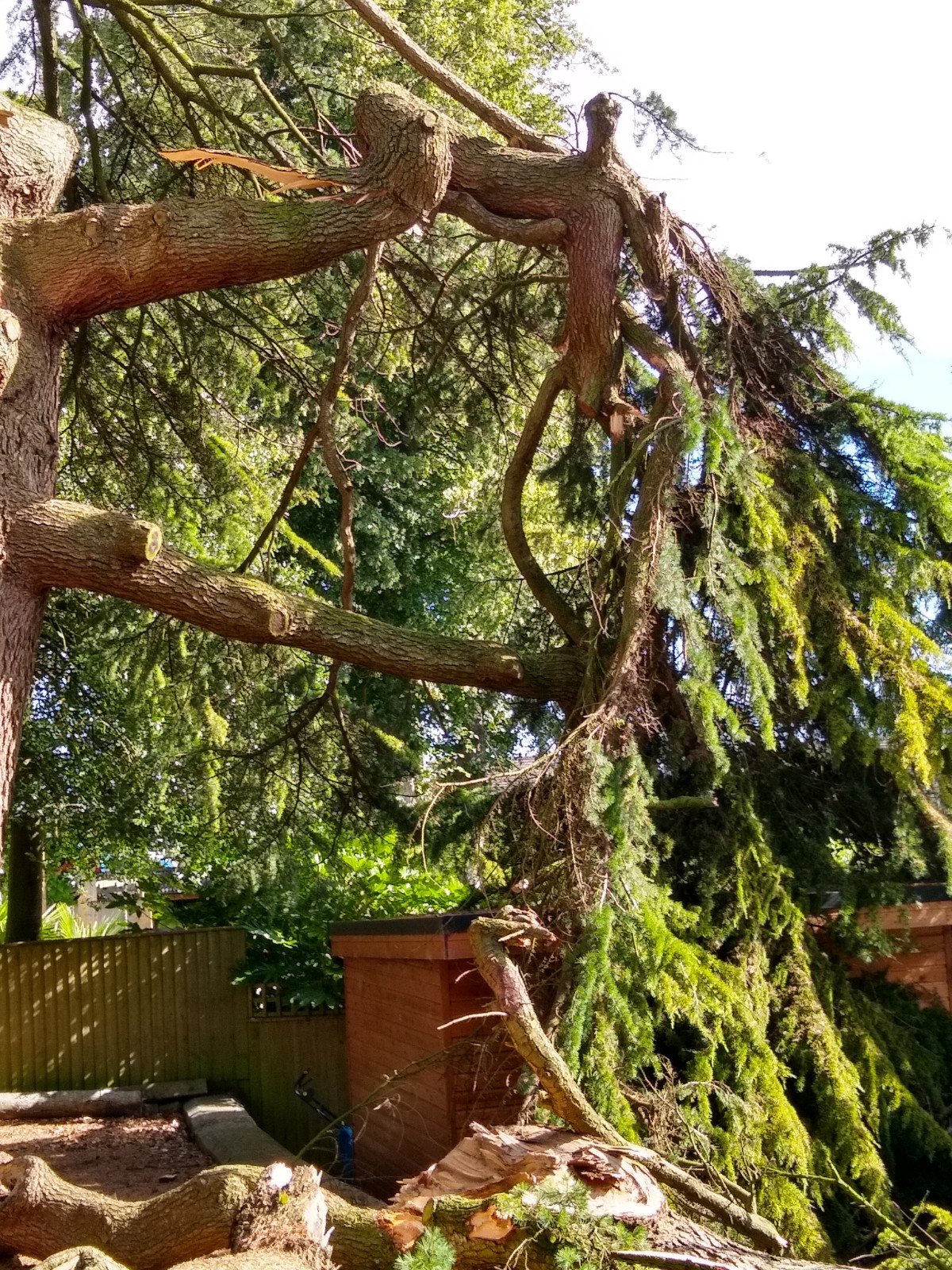 This was a pretty scary experience as we had been sitting in front of the shed with our daughter and grandchildren just 12 hours before the collapse and we are very grateful that it didn't happen then as the consequences would have been appalling.

Crumbs! Probably the last thing from your mind, but can you use any of the wood. I have a real hankering for making something from a local tree, especially one that one has a fondness for.

The previous owner of our house had a near miss with a very large beech tree. A neighbour called him at work to say that it was leaning over at a jaunty angle. He thought the neighbour was exaggerating but sure enough he came home to find it looking very precarious. This was right behind the garage which housed his previous Triumph TR6 so he enlisted his 10 year old son's help to get the car to safety. The tree came down on the garage whilst they were inside. They hit the deck and he thinks they were saved by a cast iron fuel pump in the garage which kept the tree off the ground! Doesn't bear thinking about really.

Shame. That looks like it was an impressive tree.

A lucky escape but shame about the tree.

About 25 years ago a lecturer colleague who lived owned the gatehouse of a Northumberland ex stately home flew to the USA for a holiday where on his arrival there was a message waiting to say that an ancient beech tree had come down in the winds demolishing the wall pillars, corner of his kitchen and half his stable block, I went to assess the damage and it had wiped out the sink and kettle where he'd made his tea a few hours earlier. The trunk was well over 3 feet in dia and the amount of timber and debris was astonishing.

The upside was that he had enough firewood for years, I kept some for seasoning and got the job to rebuild the stables and wall, someone else did the kitchen repairs as they were urgent and I was booked up.

The house and stables were empty so no people or horses were injured luckily as he had moved them to his daughter's field so she could keep an eye on them.

Lons, you left out the most important bit. Who got the contract for the new kettle?

Droogs":zowgumwk said:
Lons, you left out the most important bit. Who got the contract for the new kettle?
Click to expand...

:lol: I dunno but I took my own with me anyway when I was doing the work.
P

Thanks. It is/was a lovely tree which we are very fond of. It was a major factor when we decided to buy this house 21 yeaars ago.
The hanging branches threatening to demolish the shed have now been removed and miraculously the workshop has escaped unscathed. 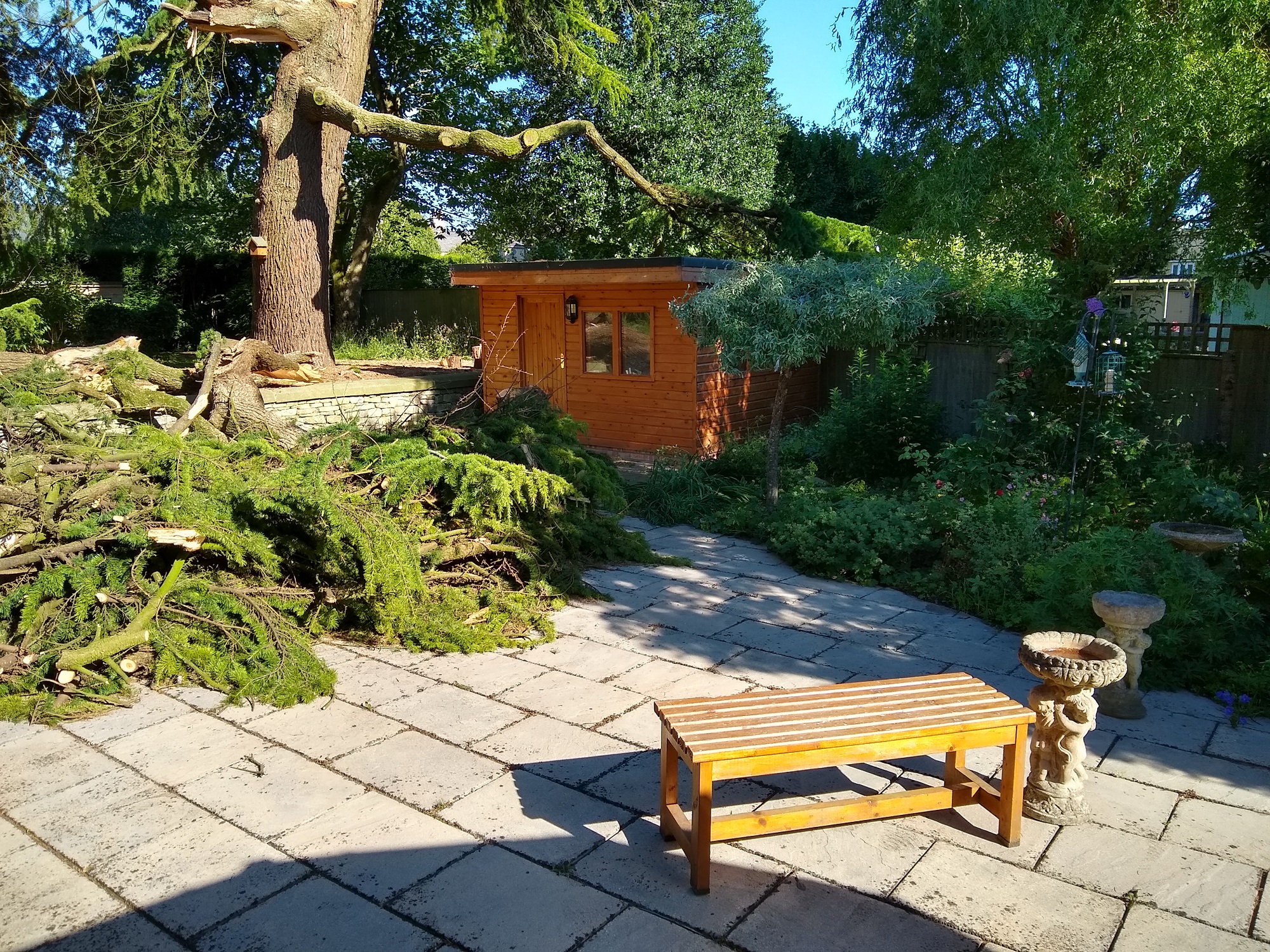 B
Your worst accident or near miss
2 3

M
A bit of recycling made my shop more comfortable.