Does anyone have any idea what this tool is? I bought it some time ago as a vintage tool. It is dated 1941 and is government issue marked (broad arrow).The wheel turns, causing a pointer to move on an upright scale. I thought it might be some sort of map measure, but the wheel and scale are not orientated correctly for that. I’m stumped.

Does one revolution move the pointer one division and what is the diameter of the wheel?
A

Map-scaler was my first thought.

It may help if we could determine the length of, say, 10 exact revolutions of the wheel. My first inclination from the pictures is that the scale is in Millimetres.
D

Hi Guys
I should have put measurements on my first post. Anyway, here they are:
The tool is 4.75 inches in length, the handle being 3.5 inches.
The wheel is 0.63 inches in diameter.
The scale runs from 0 to 60, divided into 6 segments. Each segment has 10 divisions. Each division is 1/48th inch.
I’ve checked that with an imperial engineering rule. I didn’t think they would be millimetres, because in 1941 Britain was wholly wedded to the imperial system.
One revolution of the wheel moves the pointer 1/48th inch up the scale.
The reverse of the wheel has markings to show one revolution, or part (20th) thereof.
Hope that helps.
D
N

it's a plan measure wheel. used in drafting office by the boss to check you aren't a dumbass. think it's real name is an opisometer. the one I have is a dial rather than a slide.

a quick google says it's an Army issue made my C.S.L. your date seems somewhat late for the design but it's the Army, why change it if it isn't broken.
Last edited: 23 Sep 2020

This is exactly what it is, novocaine is spot on

Thanks, guys, particularly Novocain and Droogs.
I’m a member of the Tools and Trades History Society, but nobody in that group knew what is was. I was pretty certain that somebody on this great UK workshop site would know the answer, and I was right. What a wonderful resource we have.
I can’t help wondering what maps used a scale based on 1/48th inches....
Thanks again.
D.

That arrow looks like a REME mark (British Army)

Well, that isn't quite how you'd put it. It's 1:48, a quarter inch to the foot, or one inch to four feet. Apparently it's "O" scale for model train makers, and has some Lego connection too.

I think Bristol_Rob that rather than being exclusive to REME, at the time that arrow meant simply "War Office" - i.e. any part of the Army (what would be the MoD today). But DON'T please quote me on that - in my RAF apprenticeship, which started in 1961 some of our workshop tools had a very similar-looking arrow on them - as someone has already said, the military very often had the "If it ain't broke done fix/renew it" approach.

Hi Guys.
The plot thickens thanks to Bristol Bob, Mike G and AES. As both Bob and AES note, the broad arrow mark indicates that the object thus marked is of government issue. I have an interest in military history and militaria,, and have a book ‘The Broad Arrow’ by Ian Skennerton which gives the history of this mark and its use in Britain and its Empire. The presence of the mark on the tool shows conclusively that it was government issue.
I’m puzzled by the 1:48 scale thing. I can see its use in model making, but it seems a strange scale for mapping, unless is was a map of a very small area. Can someone explain that?
The other possibility I can think of is in the design and subsequent production from drawings of military hardware.
Anyway, thanks again.
D.
N

there are 2 possibilities for this.
either it was used in a map room on very large scale area maps (think winston and cigar planning bomber runs over germany)
a hexample at that scale.

or in a drawing office as already mentioned. remember that models where often built from plans before moving to full scale as 3d animated didn't exist.

MikeG. said:
Well, that isn't quite how you'd put it. It's 1:48, a quarter inch to the foot, or one inch to four feet. Apparently it's "O" scale for model train makers, and has some Lego connection too.
Click to expand...

Wasn't 1/4" to the ft a common architectual scale Mike?
I've got a set of old imperial scale rules 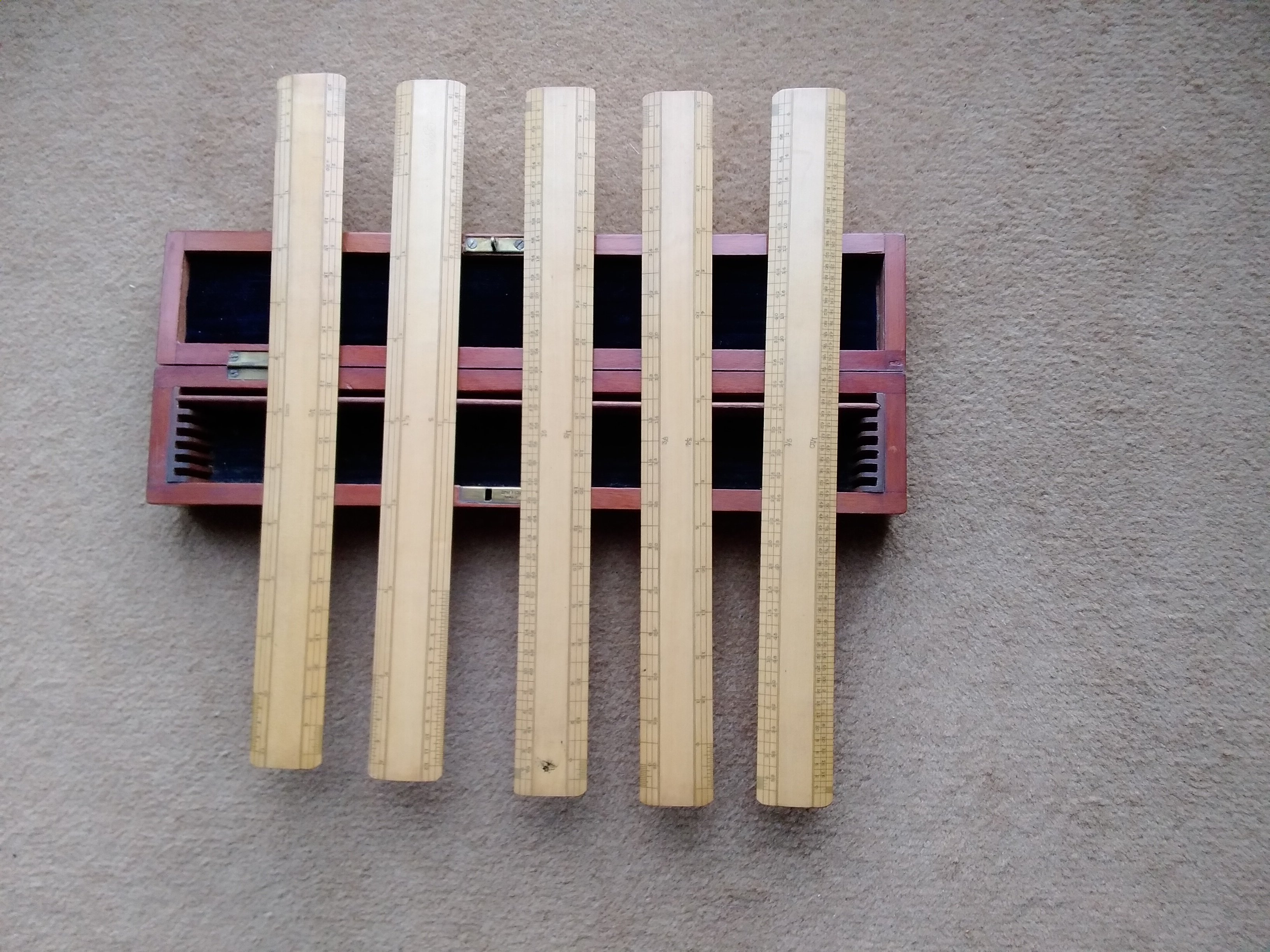 FTAGH if anyone is interested in them as a collectors item. Judging by the case, there is one missing. There's no manufacturer's name apparent.
Brian

@Democritus: I have NO idea about mapping but IF this item was for map measuring I wonder if it could have been for aviation "maps" ("charts" actually) drawn to a very large scale for low level navigation on bombing raids, spy dropping flights, etc. For example I seem to remember reading that for the famous "Dam Buster" raids 617 Sqn had some special "high detail/narrow coverage" maps made up because they spent the whole of the raids at about 100 ft altitude or less.

But I definitely dunno and am just clutching at straws really.
D

Cheers AES,
You may be right, but I have to say that you are definitely not on your own in the ‘definitely dunno’ group. I’m there as well. But, thanks to the guys on this forum, we have a broad understanding of the tool’s use. What we lack is the detail of its use in 1941.
This is just another example of the loss of knowledge of past tools and their application, when those who used to wield them have largely passed on.

My thought on the use is whether involved to map-measure point-to-point distance for artillary trajectory calculation. It's not a precision tool but would be within the margin of error for that purpose.
D

Hi Aidan and Jack,
Thanks for your input to this mystery. Both suggestions are plausible, but, short of some very old man who used it coming on here, I ‘m beginning to think that we’ll never know its precise use in 1941.
Best wishes
D.
U

AES said:
I think Bristol_Rob that rather than being exclusive to REME, at the time that arrow meant simply "War Office" - i.e. any part of the Army (what would be the MoD today).
Click to expand...

Yes, it is called the "Broad Arrow" and in fact goes back a very, very, long way, being in established use by the 14th century. Often seen with the letters WO (war office) or BO (Board of Ordnance).
You must log in or register to reply here.
Share:
Facebook Twitter Reddit Pinterest Tumblr WhatsApp Email Link