Fingers crossed this time tomorrow I'll be the proud owner of an early I.Sorby octagonal chisel. 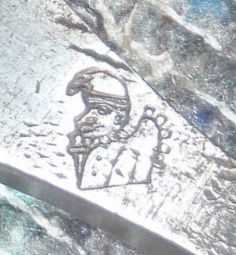 Have a few I.Sorby bits n bobs but never seen such an early looking Mr Punch before.

Anybody have anything that looks even earlier ?

Thanks in advance,
Carl

How can anyone say that buying old chisels is not the best way to go..I mean...that price!!

Great stuff...come back with some better pictures once you have your mits on it!

But he seems to have spent his first couple of centuries messing about with sausages and totally neglecting his tool-marking duties. I think that to properly date Mr Punch's first appearance on a tool, you'd need to consult the trademark registers held by the Sheffield Cutlers Company.

For a more accessible resource, there's a great little publication, put together in 1991 by Eileen Woodhead and published by the Canadian Parks Service! (And why shouldn't they be interested in Sheffield history? Apparently their archaelogists dig up old metal tools and cutlery on historic sites, and they need to know where and when they were made. I think it's very nice of them to have shared their reference notes. =D> )

You can download it from the Society for Historical Archaeology here: http://www.sha.org/index.php/publications/cart/download/19495

The mark must have been older than its appearences in the following directories that the author consulted in compiling the guide:

1892 White's Hardware Trade Marks
1919 Register of the Trade Marks of the Cutlers Co of Sheffield
1974 Richard Washer: The Sheffield Bowie and Pocket-knife Makers 1825-1925

Related information: Turner Naylor and Co were acquired by Wm Marples and Son in 1876 - so use of the Mr Punch marks passed to them.

The whole story is probably more complicated than this, especially if you want to fit all the other Sorby names in, or distinguish between the different versions of it. But never mind that, here's a nice Turner, Naylor and Marples ad from 1889 showing that Mr Punch was, well, pleased as Punch with the new arrangements and his I Sorby bag for life!!

Need to verify this but Charles Marples (3rd Marples brother who went his own way) has solely manufactured tools using the Punch trademark.

Not sure if it was before HE joined Turner Naylor though....

An afterthought on my previous post, going back to the original John Sorby company.

The records consulted for the Canadian guide jump from a 1797 directory of Sheffield to the 1892 one mentioned - that's a frustratingly wide gap - I was hoping to be able to deduce a date by seeing that she had consulted mid C19th directories but not found Mr Punch there.

I should have looked in there first, but BPM III confirms that the Sorby story is complicated. It says there that the I Sorby mark was used by ten later firms before it passed to Turner, Naylor and Co. There's a discussion about Sorby on this Sheffield History site http://www.sheffieldhistory.co.uk/forums/index.php/topic/13972-joseph-turner-co/ which gives the detail. I think it's a page from "Some Nineteenth Century English Woodworking Tools" by Ken Roberts. (It's a book I don't have - if anyone has a copy they don't want, please get in touch.)

The Reeses suggest a date of around 1870 for the appearance of Mr Punch.
J

There's a 1876 Turner, Naylor and Marples advert on:
http://www.gracesguide.co.uk/Turner,_Naylor_and_Marples
which doesn't have the Punch logo. That would suggest the logo was introduced after 1876 because it would be strange if the logo was in use but wasn't on the advert.
M

Thanks all and especially Andy,

John but I found this online that sold for daft money which predates Turner,Naylor and Marples by 5 years. Since its Turner,Naylor & Co. 1871 from the above link by Andy
http://www.sheffieldhistory.co.uk/forum ... turner-co/

Edit: I've still got it (muppetry that is).
Apologies John the name reverted back to Turner,Naylor &Co in 1893-1909 so this poster doesn't help. 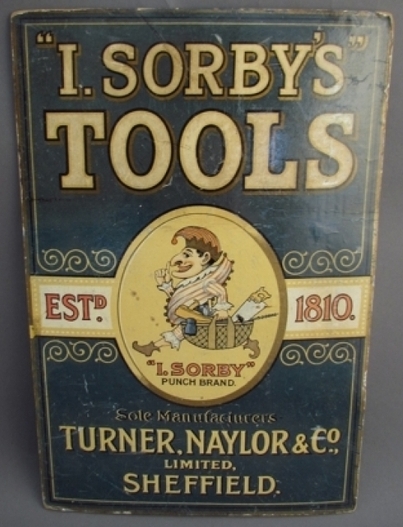 I did some research before starting this thread and 1870 kept cropping up but so did 1920's as an end date. Since I have a 1959 catalogue full of Mr P items I know the 1920's is wrong so understandably I don't have much faith in the 1870 either.

I have emailed Sheffield Cutlers Company (thanks again Andy for the suggestion).

Confusing is a bit of an understatement when it comes to the Sorby's or do I do I mean Sorsby's lol.

I'm going to rebel and post this from the other site
http://www.sheffieldhistory.co.uk/forum ... turner-co/ 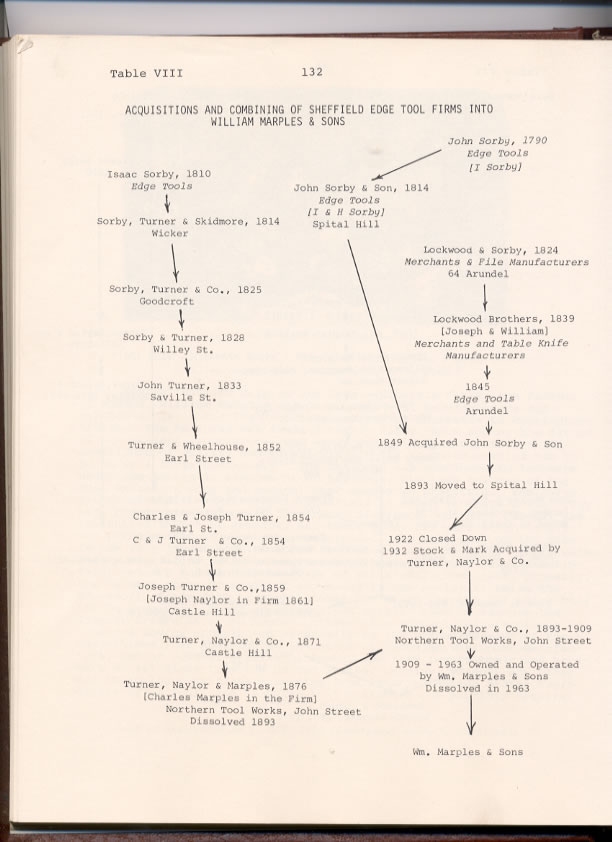 It's no help to the discussion, but just because it looks so good, here's a picture of a display case at the Hawley Gallery in Kelham Island Museum, also from Grace's Guide. Unfortunately you can't quite read all of the caption to see the date and I can't find my photos from my one visit there. Anyone nearby who could pop round?

Ladies and Gentleman, I have an answer for you thanks to AndyT and Dr Joan Unwin of the Sheffield Cuttlers Archive.

The mark of Mr Punch appears in the Company register in 1859, registered by Joseph Turner.

So now we know, Joan also sent some images but will need to ask her permission before I share with the group (sorry, it's only polite).

My chisel also arrived and I will photograph next time the sun shines.

Good news Dr Joan Unwin has no objection to the images being posted if they are credited to The Company of Cutlers in Hallamshire.

The mark of Mr Punch appears in the Company register in 1859, registered by Joseph Turner 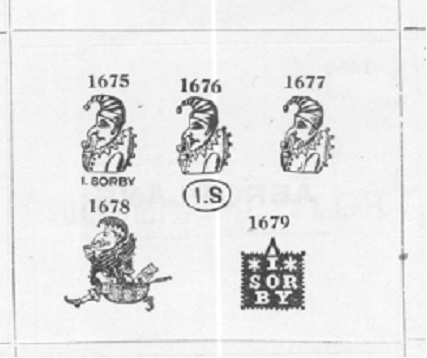 In a Cutlers’ Company publication, 1919, of existing registered trademarks, the above images were owned by Turner, Naylor and Co. They appear to own the mark I SORBY also.

The 1953 Company publication shows Turner, Naylor and Co, as the owners of the above marks, together with I and H SORBY.
From our records I cannot say when John Sorby became the sole owner of the Mr Punch mark.


In 1791, John Sorby registered the mark of a hanging sheep 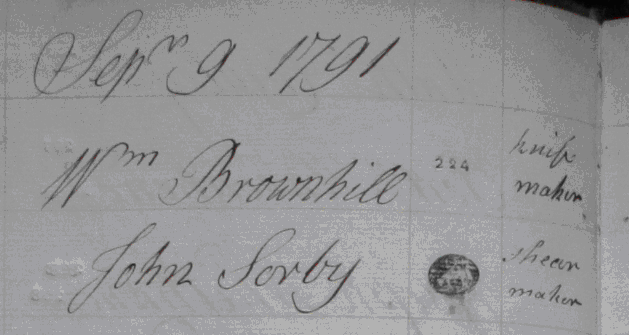 John Sorby registered the mark of a thistle in November 1808

The trademarks of hanging sheep and I AND H SORBY were owned for some time by Lockwood Brothers.

So many thanks to the The Company of Cutlers in Hallamshire for the above text and images.

This is some serious groundbreaking stuff and one of the reasons I love this place!!

And which Pitt would this be? Pitt the Toddler? Pitt the Embryo? Pitt the Glint in the Milkman's Eye? Pitt the toolmaker who liked to stamp his tools with a trident ? :evil:

Anyway I digress, here is a page from my 1959 catalogue confirming what Joan said above.

Always thought that the hanging sheep was a very bizarre/macabre logo but the penny has finally dropped thanks to this page and Joan. Makes perfect sense if you originally start out making sheep shears.

Anyway here is my Chisel, not sure what I can add to the pictures on ebay but I've had a bash. Once upon a time "W.HAWES" must have really rated his chisel or why else did he stamp his name on it FOUR times. 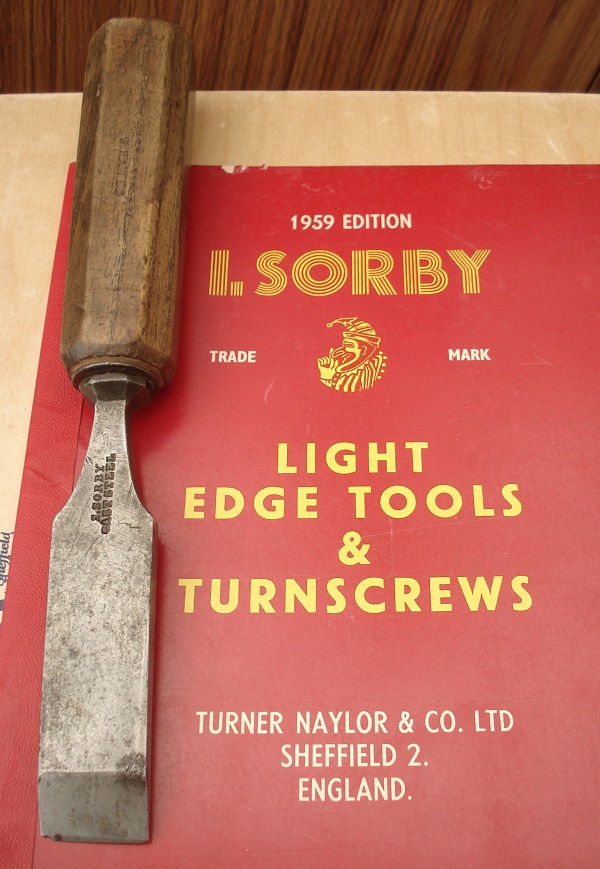 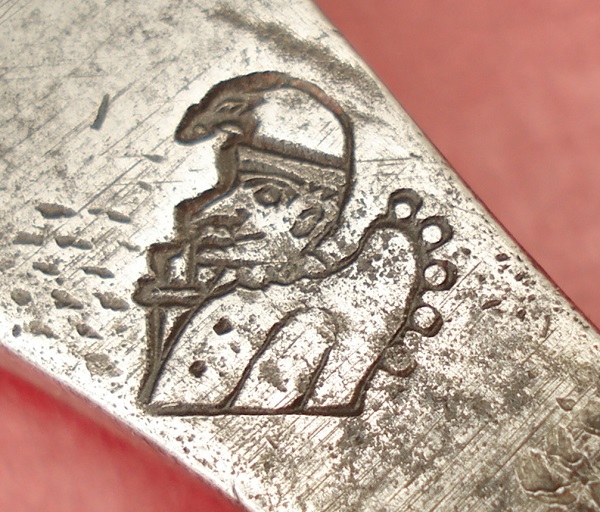 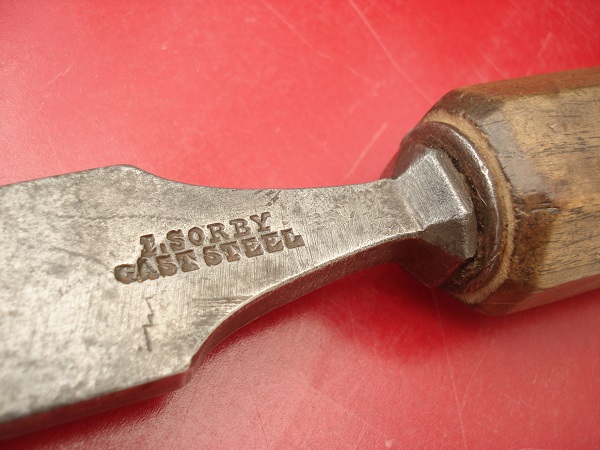 Mr_P":2ygedbnc said:
Anyway here is my Chisel, not sure what I can add to the pictures on ebay but I've had a bash.
Click to expand...

Can get fiddly though.

Lots of Sorby info here including Robert , I&H and of course I.Sorby.

Rather late I know !
I have obtained an ISORBY pigsticker chisel. Mr Punch looks relatively primitive: 4 bells down his back, two dots for buttons on his front, no ear. Can anyone suggest a rough date please.

[email protected]":2xdzfyav said:
Rather late I know !
I have obtained an ISORBY pigsticker chisel. Mr Punch looks relatively primitive: 4 bells down his back, two dots for buttons on his front, no ear. Can anyone suggest a rough date please.
Click to expand...

A couple of things.........Firstly, you really should change your user name so that you don't have an email address on public view (an open invitation to scammers). Secondly, I think the barrier to posting photos is 3 posts, so I suggest you make some contributions on the forum then come back here with a photo of the Mr Punch symbol. No-one is going to be able to offer sensible guesses without seeing it.
You must log in or register to reply here.
Share:
Facebook Twitter Reddit Pinterest Tumblr WhatsApp Email Link