Hello everyone, been a while since I posted anything on the forums and wanted to share this little refurbishing of a moving fillister plane I recently did.

I spotted it on “the bay” for £15, had been looking for one like this for a long time, I wanted a moving fillister with dovetailed boxing and a ray fleck figuring to it which this one has nicely. It is stamped "A. Eyre, 326 Euston Road" I don't know if this is the same Euston road as is in London today, 326 today would be somewhere near Warren St. Tube station I think, open to correction. I know other tool merchants and makers place names changed over time like Moseley which is always interesting to find out.

Digression aside I was the only bidder on this plane, so for about £20 posted it was mine. Part of the reason I suspect was the lack of a nicking iron, more on that to follow.

Below are some photos of how I received the plane straight out of the packaging from the back of someone's attic or shed somewhere, It smelled musty and stale but not damp which is always good so was probably somewhere with little air circulation for a good while. 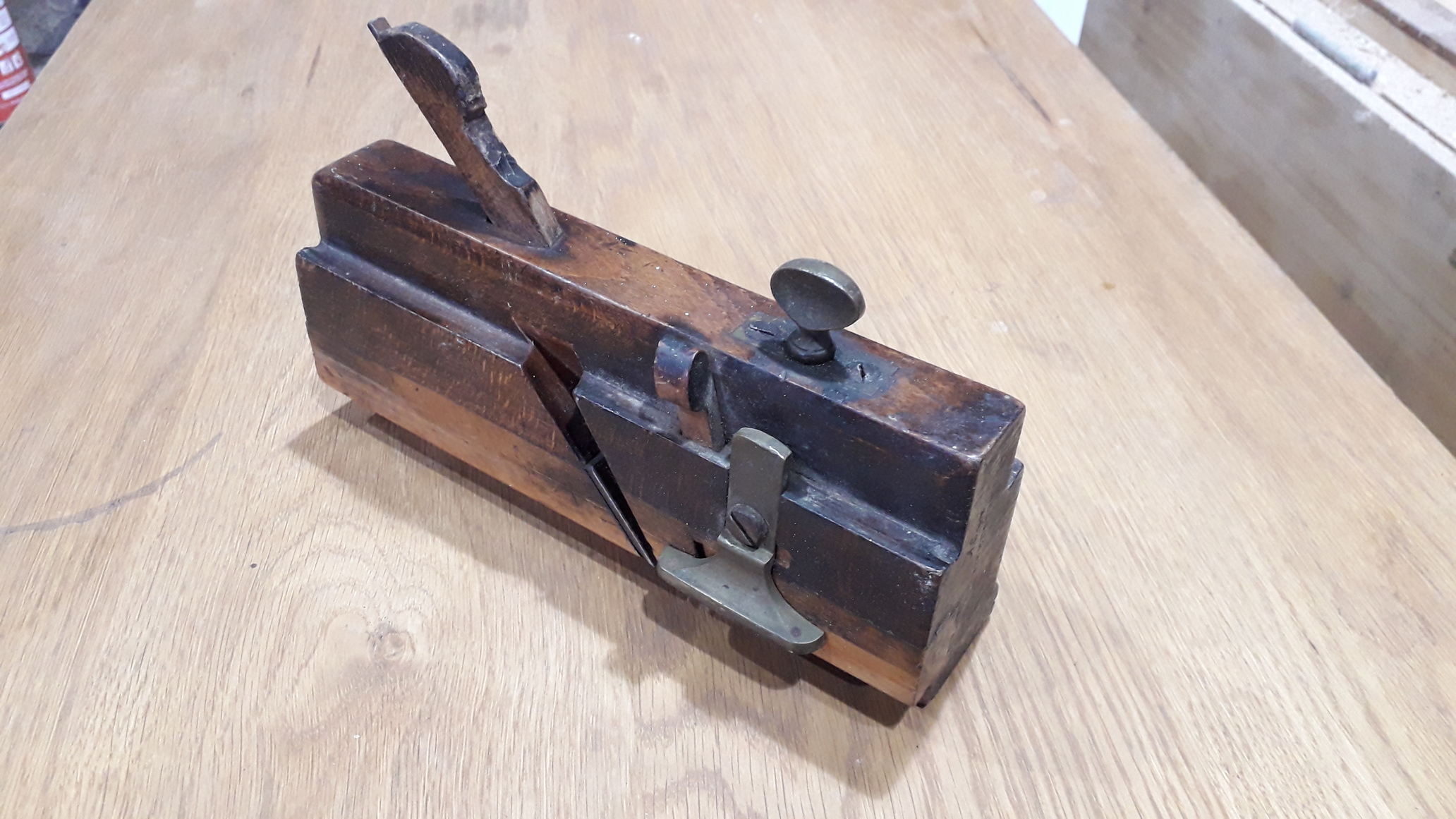 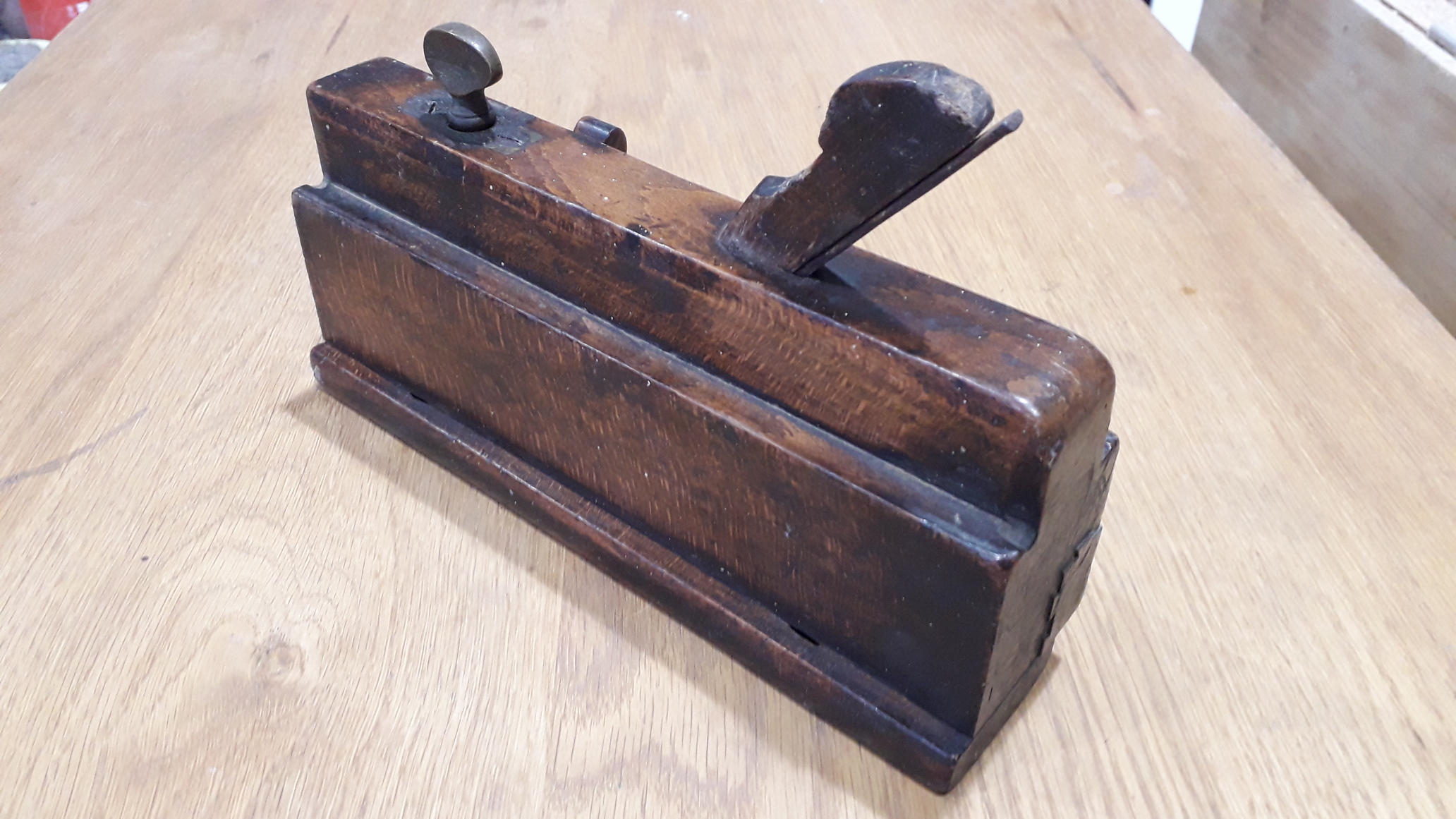 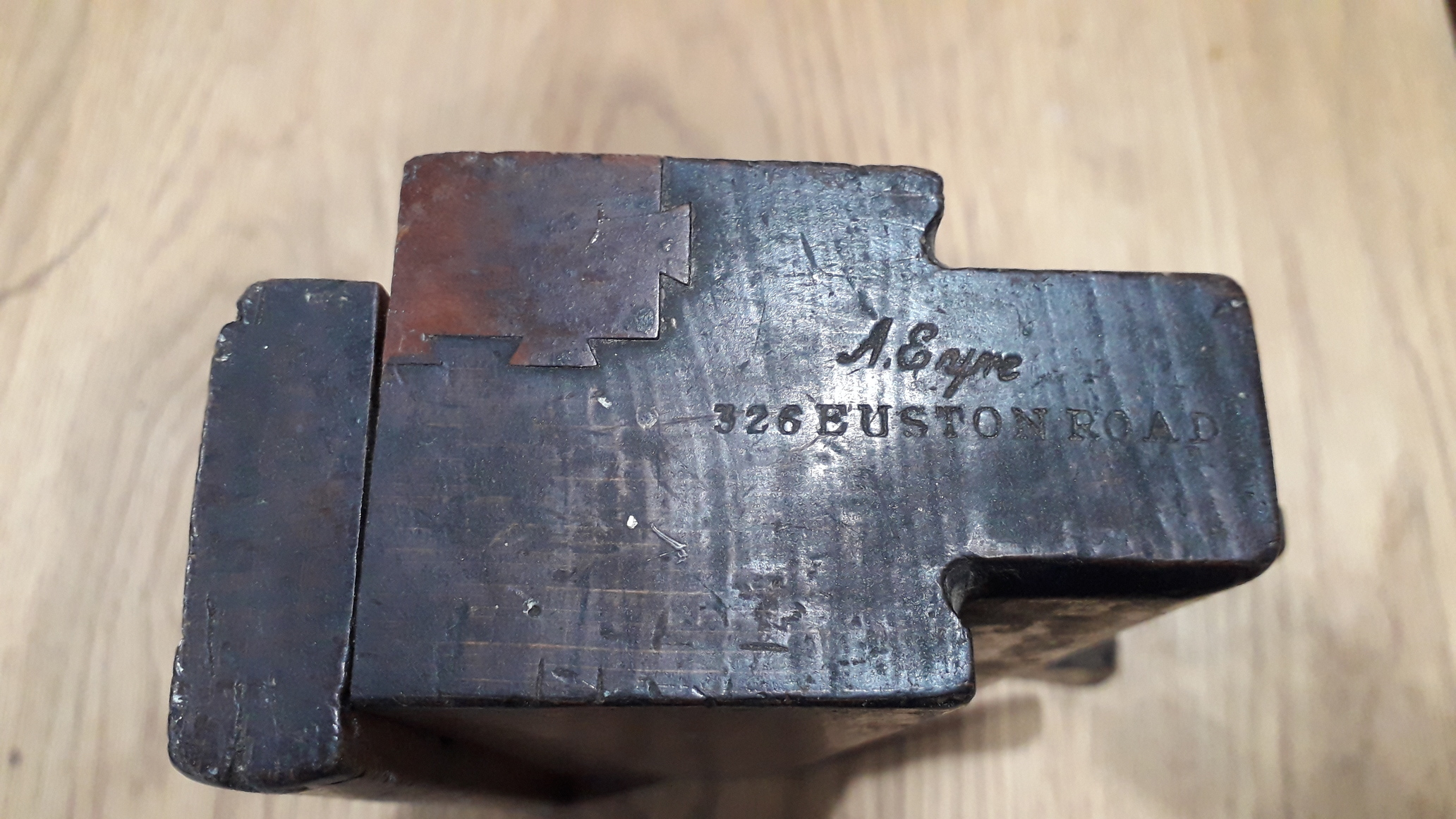 First thing I wanted to do was make sure there was no damage or other major problems to fix, the plane had no cracks/splits, worm, was not warped and had all of its parts bar the nicker.


I carefully dismantled it not forcing any screws and all except the two depth adjuster fixing screws came out easily. I left the depth adjuster mechanism in place as it was otherwise working other than some dirt in the thread making it a bit hard to turn but that cleaned up nicely with WD-40 and a toothbrush (being careful to wipe the oil off quickly as to not stain the plane) and is working well now. A dab of beeswax on the threads made everything go back together smoothly. 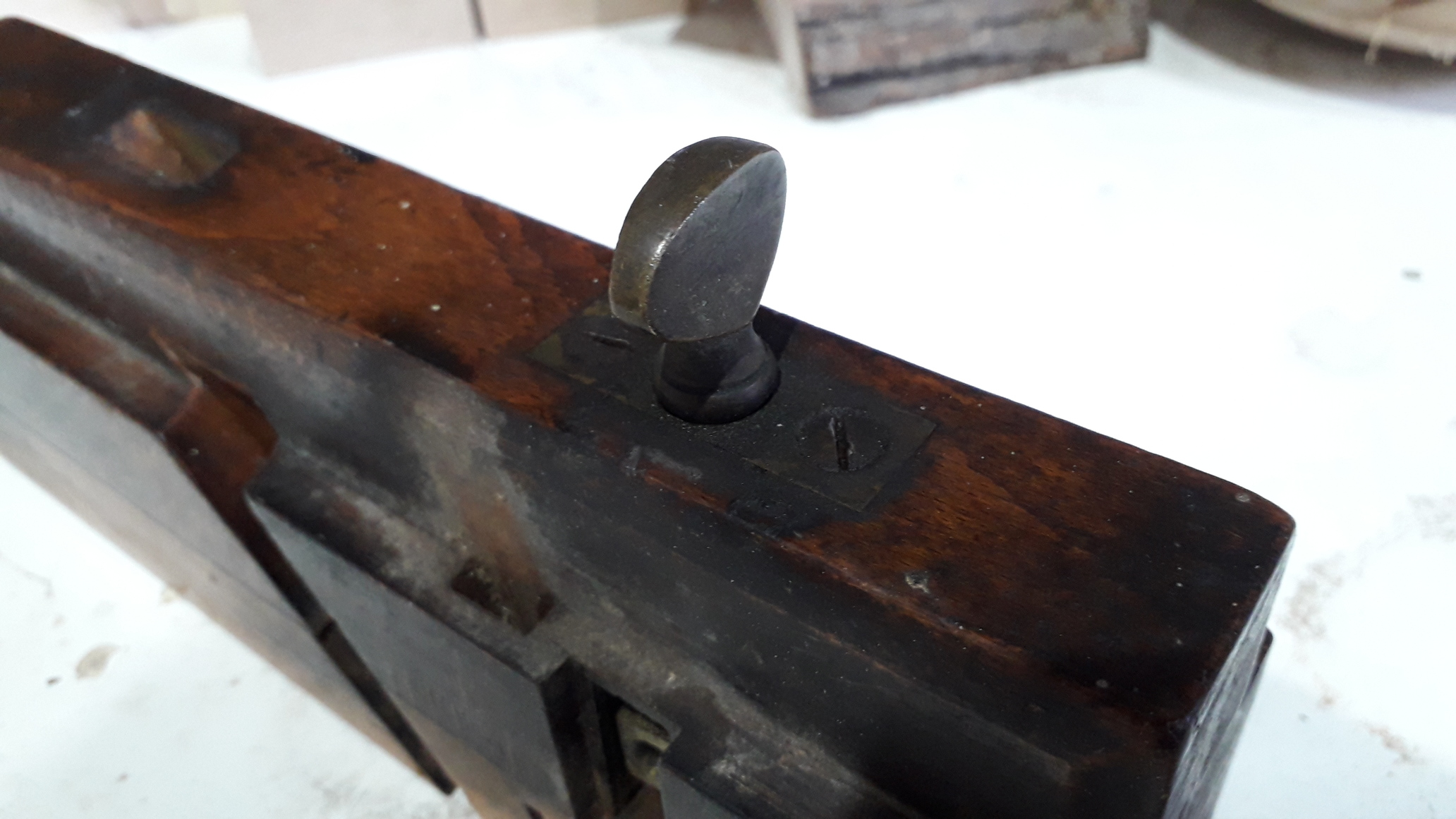 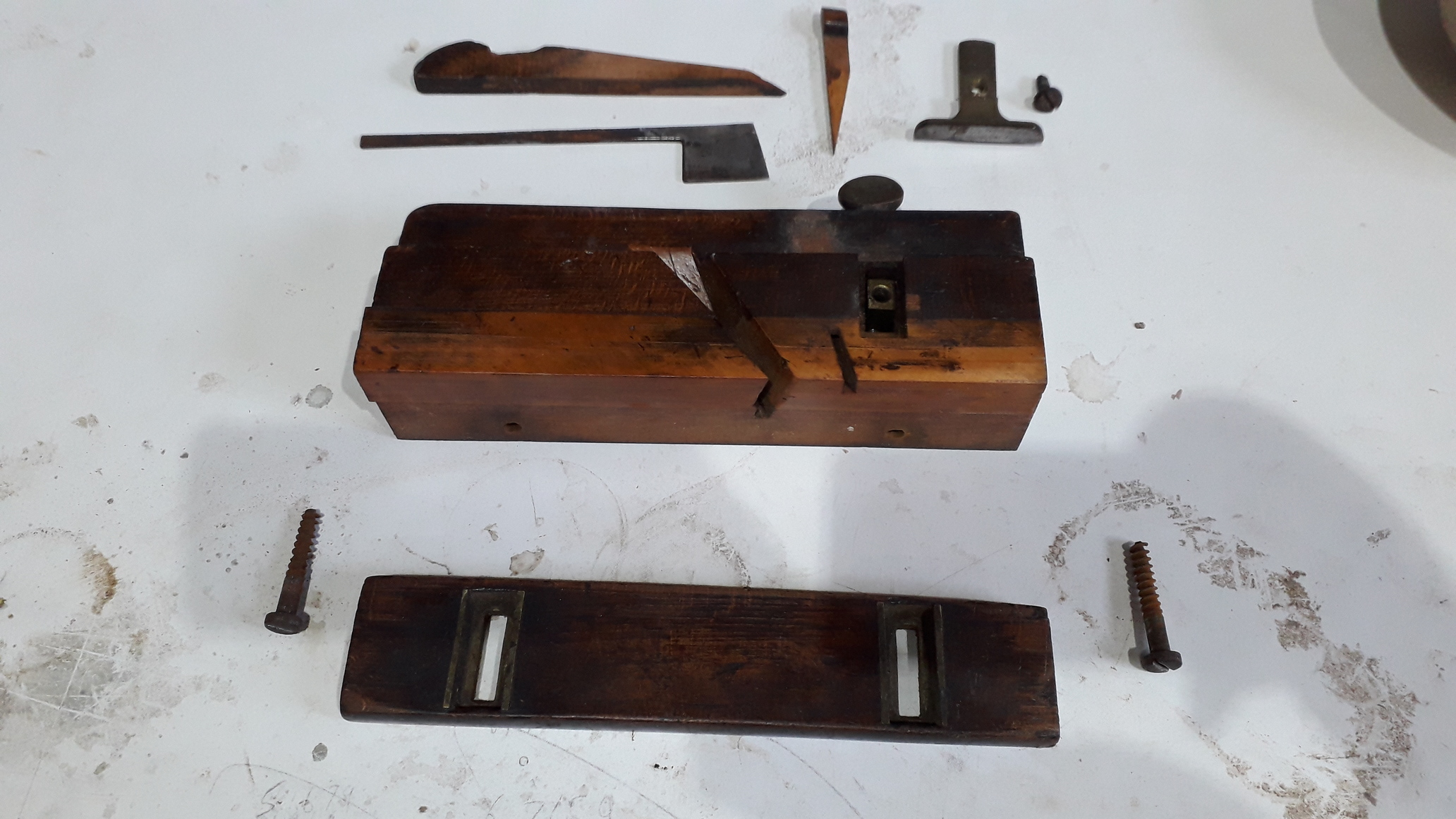 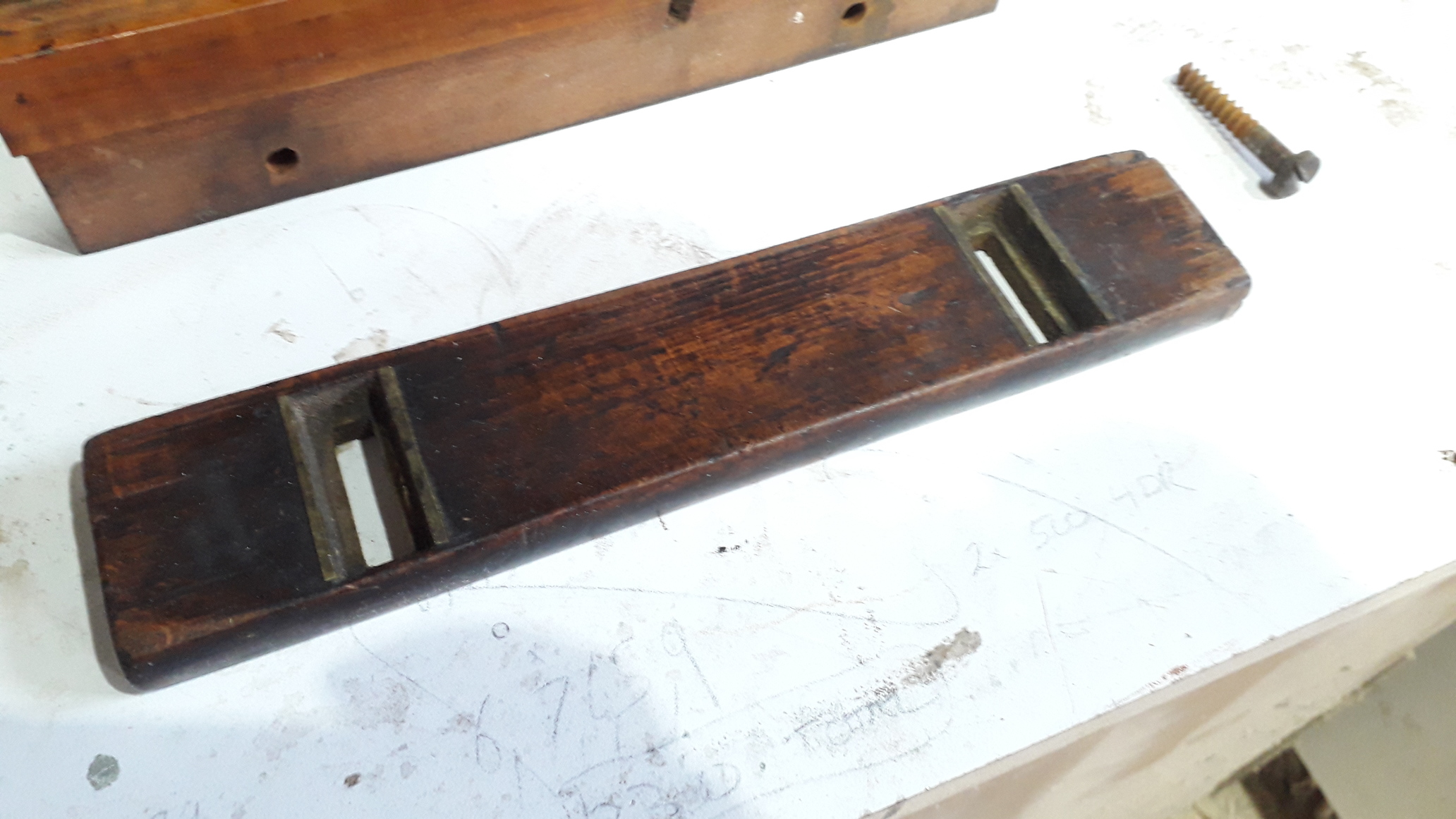 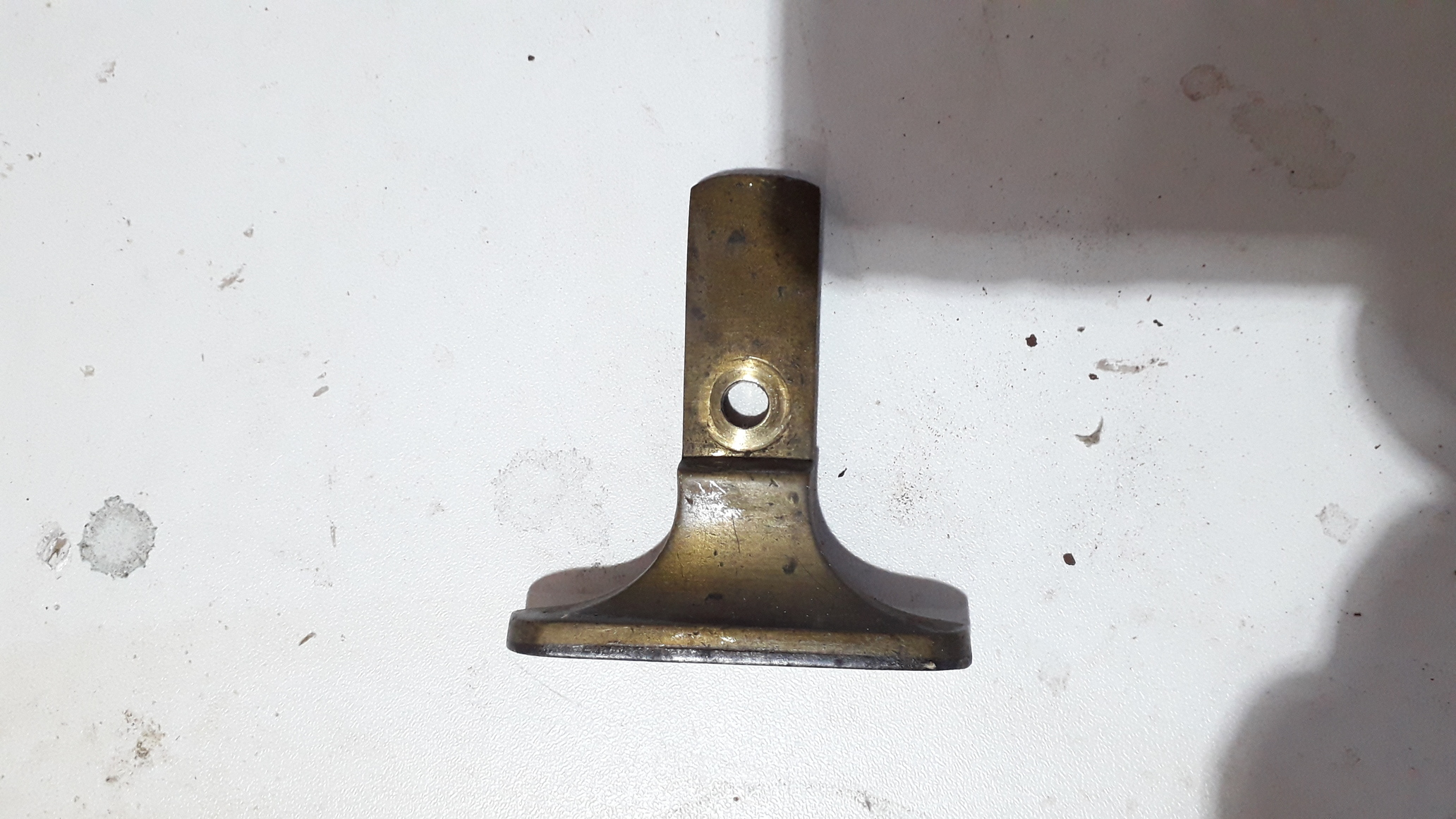 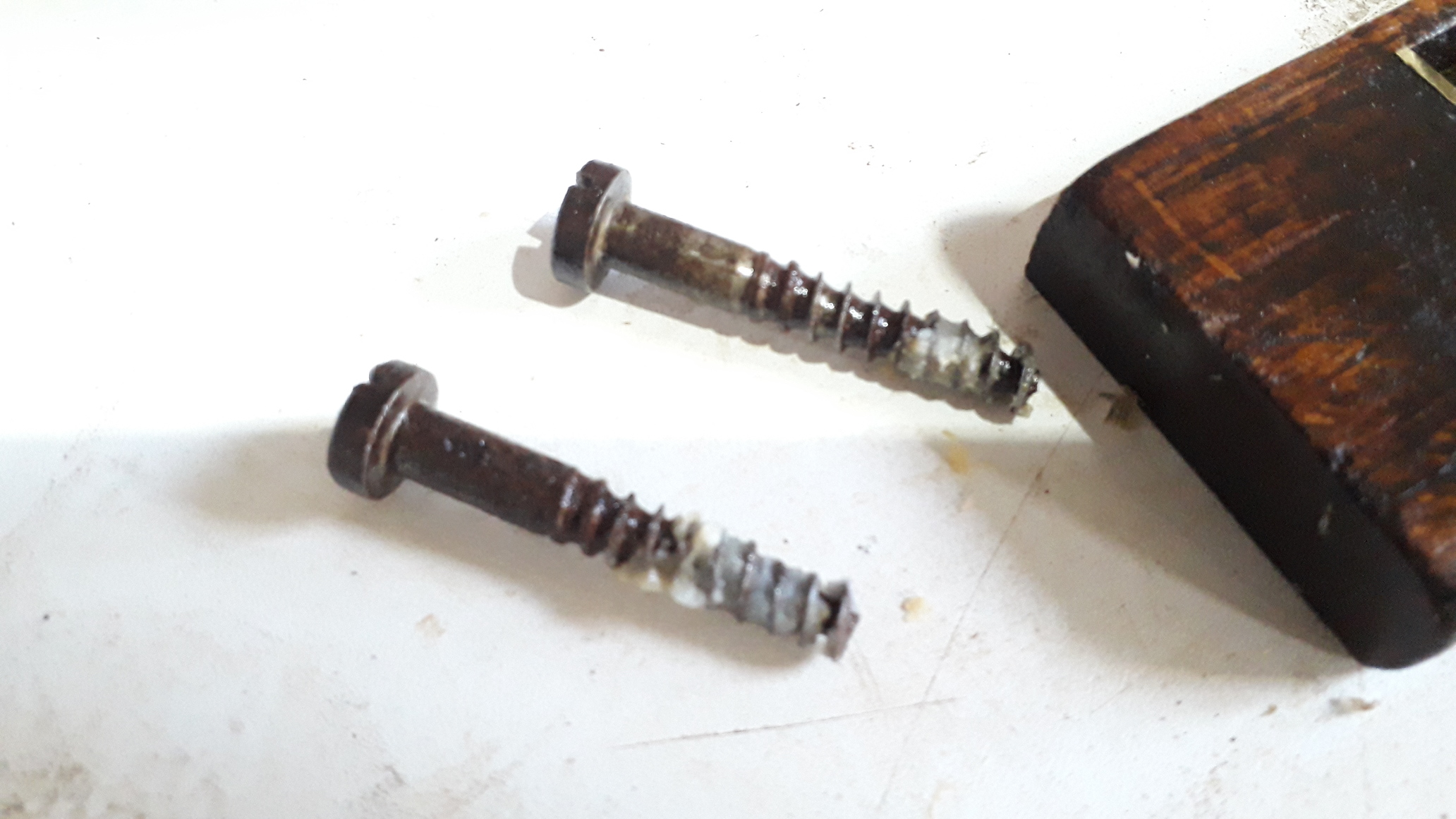 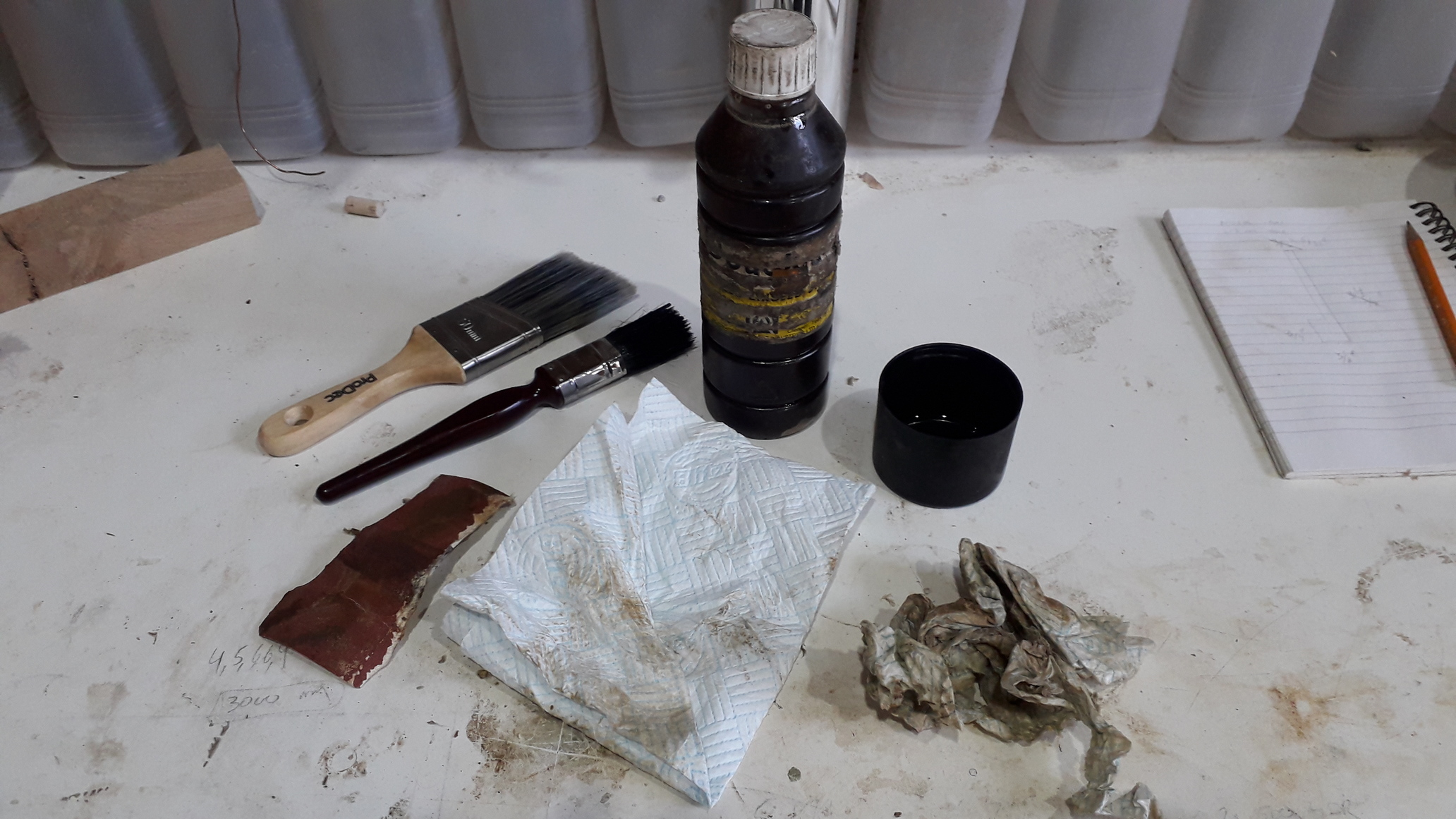 For the rest of the plane I started with the least intrusive method to clean grime off I know which is wiping with linseed oil on a cloth.

This took off a lot of the grime but left some paint splatter which I tried to remove but it wasn't coming off easily and I didn't want to use any abrasive methods like nylon pot scrubbers for fear of removing the use related wear pattern of the users hands behind the blade and at the front.

The paint is less visible in person, the camera makes it seem worse than it is honestly. The plane itself doesn't look much cleaner but the dirt and grime is gone which makes a difference. I started with a clean cloth and by the end it was almost all black. Everything I used is in the picture above, The sandpaper was only for the blade where it sits against the wedge as it had some stubborn rust. I was careful to not use too rough of a paper (240g) and didn't goo to heavy so I wouldn't leave sandpaper scratches.

Now about the missing nicker iron, I am assuming this is the reason there were no other bidders on the plane and I took a chance hoping I could make a replacement myself from some o1 ground flat stock which engineers and toolmakers would use.

In the process of trying to find some I remembered Phil Edwards from Philly planes makes replacement irons for moulding planes so sent him an email and enquired about getting a replacement intending to buy an iron and do the work myself. For a few quid more he made, shaped and tempered it which I couldn't argue with as wasn't too keen to learn how to temper myself. He suggested I make a card template to find the size.

I actually made one from 3mm hardboard, cut it all out with a chisel and made small adjustments with 120g sandpaper to fit. Measured it and drew a little dimensioned picture and sent that to Philly, few weeks and £20 later I had a nicker iron, albeit cost more than I paid for the plane but I'm not too bothered as both will probably outlive me. 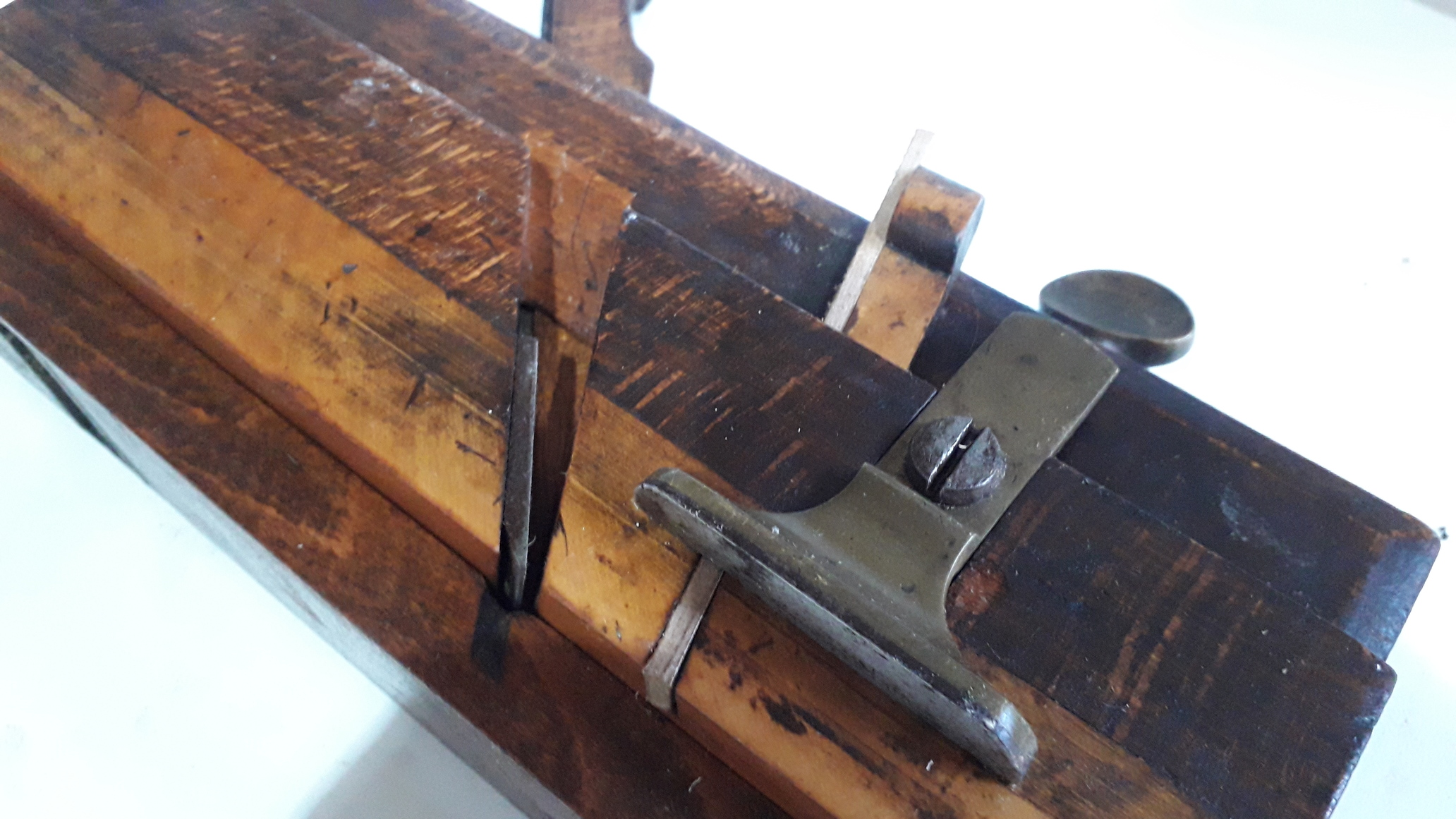 (Apparently I may only attach 10 files so you may consider this the intermission)
Last edited: 11 Aug 2020
D 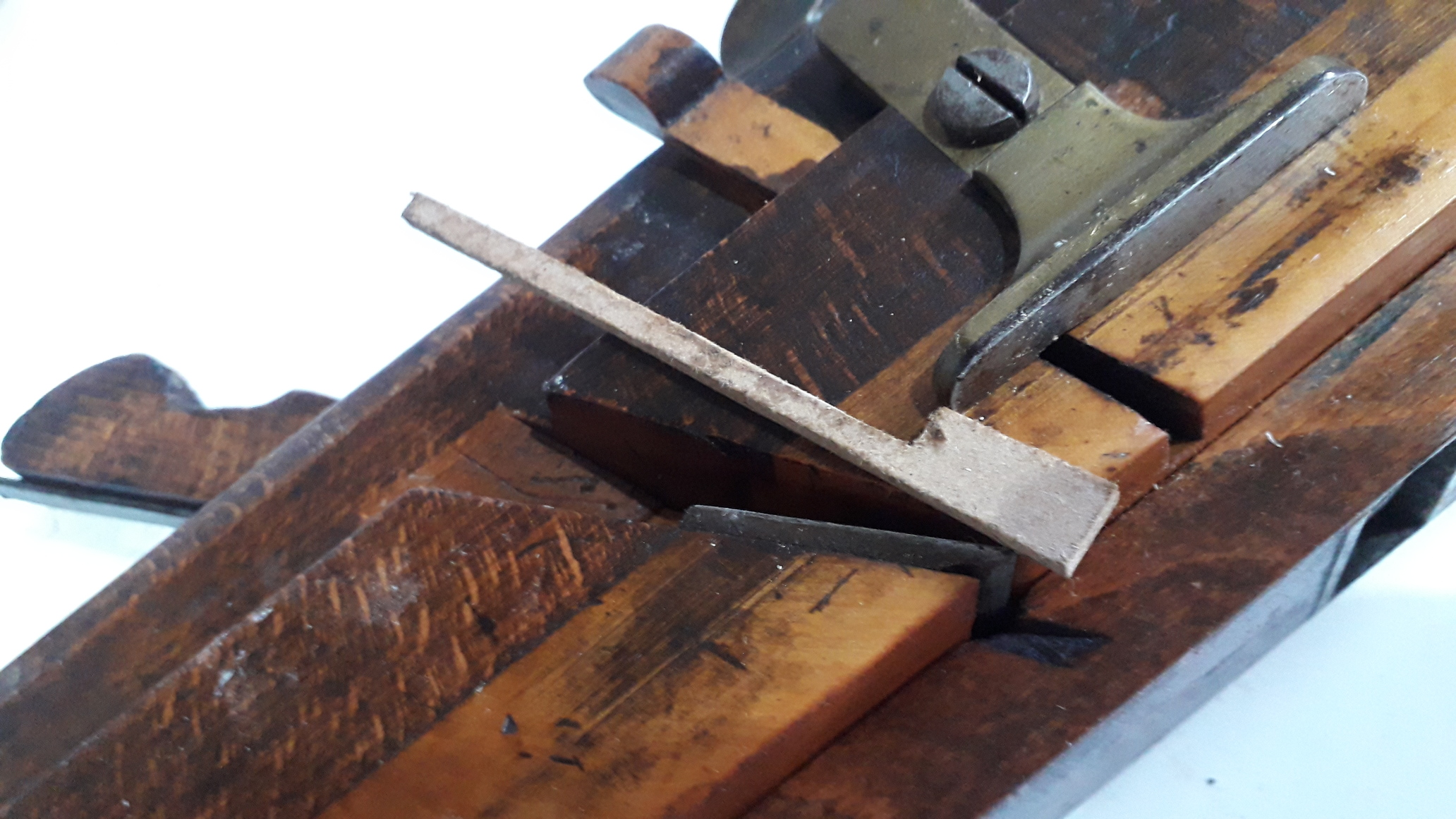 So with all the bits present now and everything clean and working it was time to sharpen and give it a little test. I thought that the best test would be one of the worst woods for tear out which is pine, I set the fence to 3/8”, took a stroke backwards to test the nicker, worked perfect, then a tap to set the blade and we were away! I can't fault the result, a very clean edge, and the end grain surface was very solid. The only tear out was the end which is my fault for not putting a sacrificial piece there but for a test piece I didn't bother. 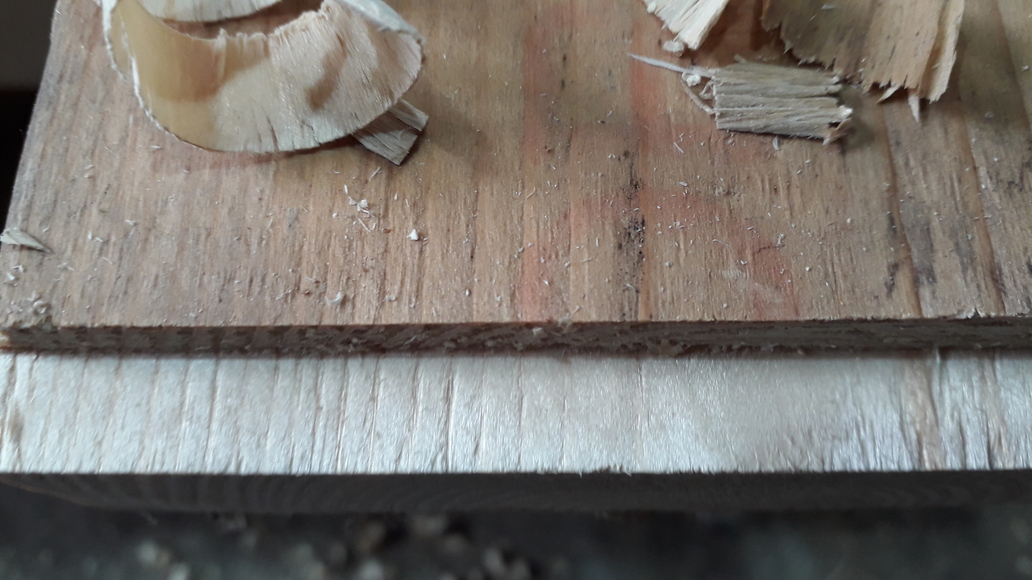 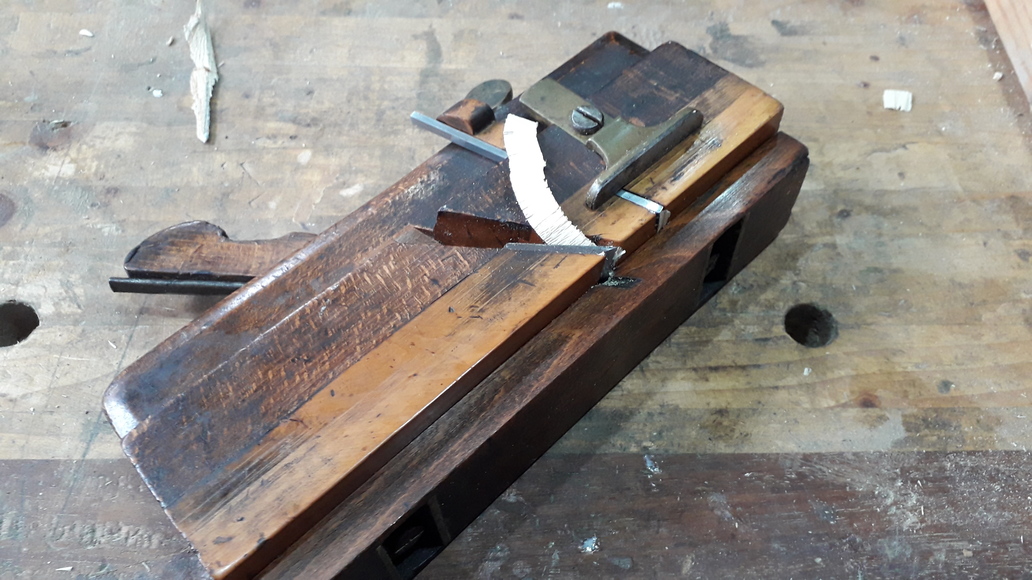 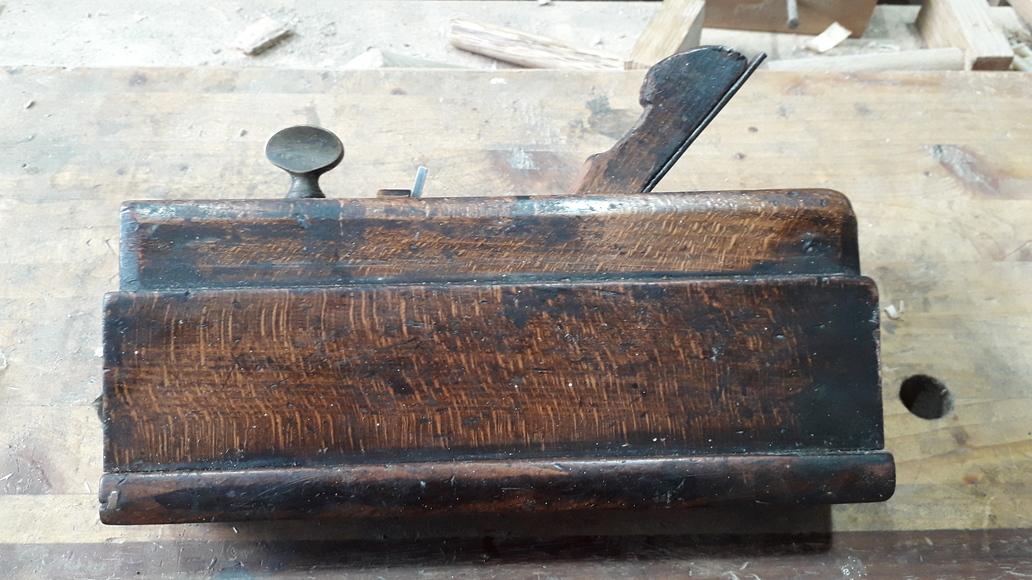 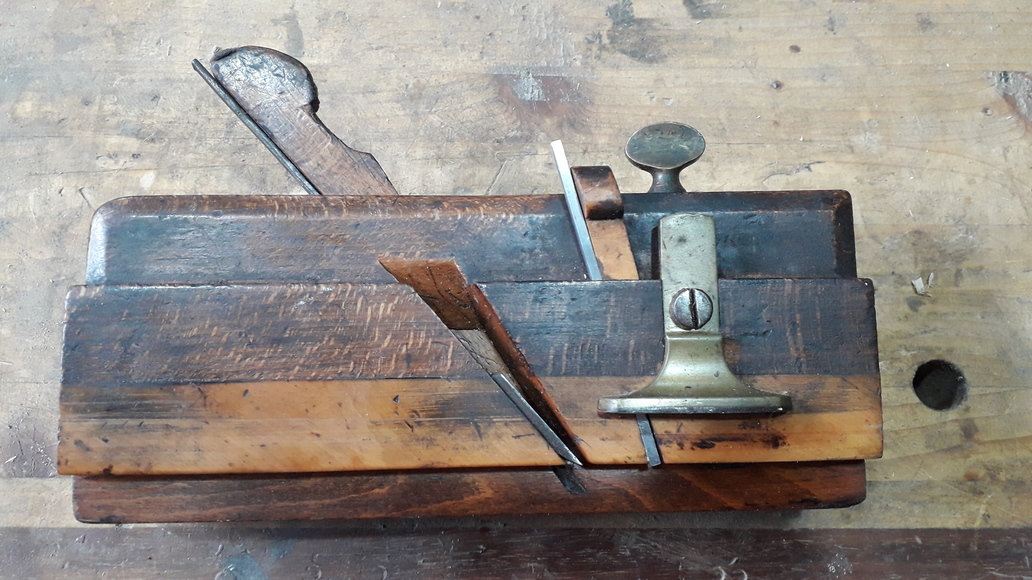 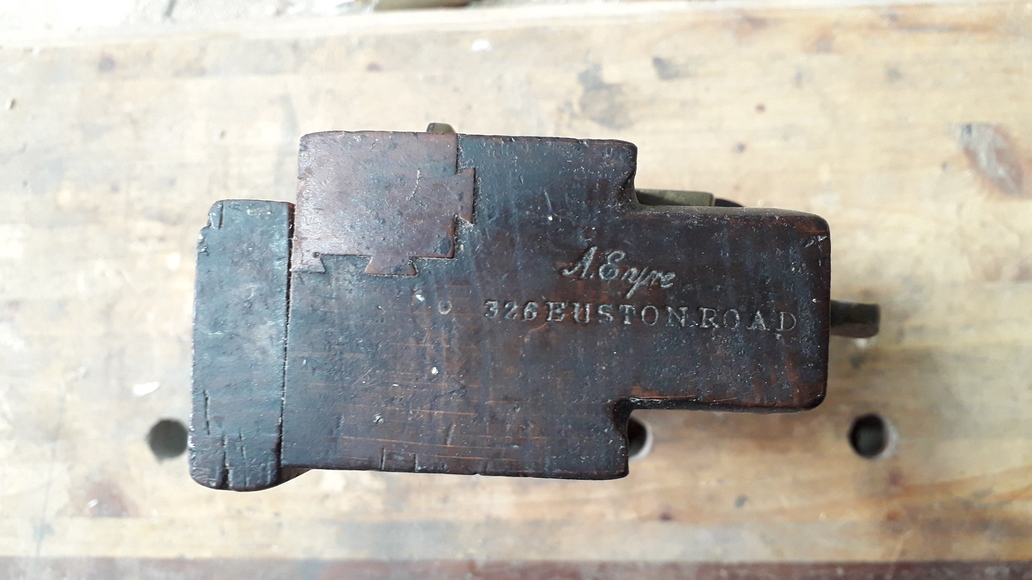 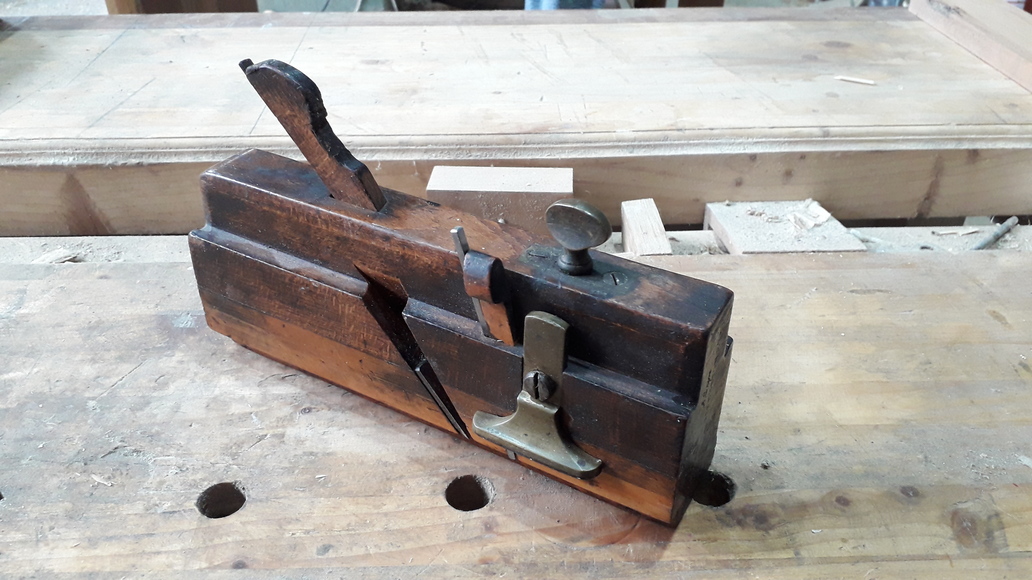 So that's it, I have a working plane to add to my collection which will see some use on some smaller projects, Here are some final pics and I hope my waffling on was of more than slight interesting to someone.
O

A good score at that price and looks to be working nicely. As to the paint spots they will usually scrape off with the edge of a small block of wood. Do it gently one spot at a time. Those bamboo skewers with the wide end are really good at it. Funny how nearly all old wooden planes come with paint spatter.

Excellent. A really useful plane, given just enough maintenance to keep it in working order. I'm glad you kept the light and dark patterning from the previous owner's hands - it shows you how to hold it!

I also really like the dovetail boxing. All planed, by hand and still doing its job.

Nice thought about the nicker too and very obliging of Phil.

It's interesting to note that moving fillisters seem to remain stuck at bargain prices and haven't gone the way of metal router planes.