Mounting riving knife to a Kity 419

Hi all, first post. I recently bought a 419 from eBay (massive thanks to this forum, the reading material I found guided me through the options for a beginner). The saw came with the riving knife, but no mounting hardware. I ordered spares through NMA and expected a complete set, but all they supply is 2 metal plates. The riving knife has a slot and the plates have two 8mm holes, do I just align a plate either side of the riving knife and secure the whole lot to the saw with ordinary nuts and bolts and a little thread lock? I presume the slot in the riving knife is to allow up and down adjustment relative to the blade? That's the most sense I can make of it, but I'd rather check before doing something stupid/dangerous. What would be really helpful is if someone could take a photo of how their 419 riving knife is mounted.

Here is how mine is attached. 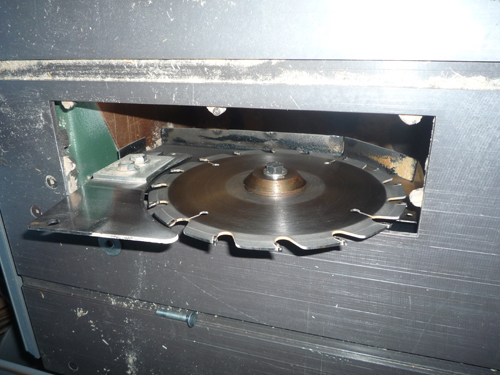 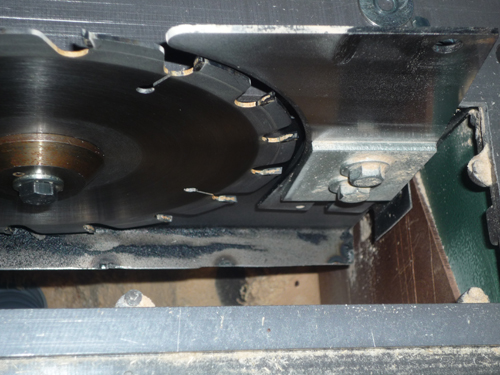 The bolts are threaded directly and do not have nuts.

I don't use thread-lock as I sometimes take the riving knife out for trenching cuts.

fidgec94":3gyc1px9 said:
I presume the slot in the riving knife is to allow up and down adjustment relative to the blade?
Click to expand...

Hi Chris
Welsome to the Forum.
Yes the slots are for adjustment. The riving knife should clear the blade by 3-8mm at table level. Blades can vary in diameter and that leeway will allow you to set the optimal position.

MickCheese":1mqwbvzb said:
Chris
The bolts are threaded directly and do not have nuts.

I don't use thread-lock as I sometimes take the riving knife out for trenching cuts.
Mick
Click to expand...

Thanks for pictures, it's arranged how I imagined, just surprised no nuts. The diameter of the holes in the 2 plates vary 8.25 to 8.5 mm. So I need some bolts that are large enough to cut a thread into both plates and that will pull the whole assembly together?


Steve Maskery":1mqwbvzb said:
Yes the slots are for adjustment. The riving knife should clear the blade by 3-8mm at table level. Blades can vary in diameter and that leeway will allow you to set the optimal position.
Click to expand...

I would expect the tapped holes to be in the body of the machine itself. M8. Isn't the rectangular plate just a big two-hole washer? Or am I missing something?
F

Steve Maskery":10tncxrv said:
I would expect the tapped holes to be in the body of the machine itself. M8. Isn't the rectangular plate just a big two-hole washer? Or am I missing something?
Click to expand...

No you're not missing anything, except me being a numpty. I've just been out to the shed and had look. The holes on the body of the saw looked tapped, in which case the plates I have are like you say, large washers. I haven't had the opportunity to have a good look at the saw since collecting and parts diagram isn't quite accurate. Sorry for the confusion, some M8 bolts should do the trick. Thanks guys,

Good. Don't forget that if you decide ever to fit a thin-kerf blade, you will need to make a new riving knife. I bet your RK is 3mm thick (for a 1/8" blade). 2mm Tool steel (gauge plate) is a suitable material for a blade that has a 2.4mm kerf, for example.
S
E

Too late tonight, but my 419 is dismantled to fix the riving knife. I have some pictures, which I can't get to right now. I'll have a look tomorrow.

Basically, the two spacer plates are different thicknesses, and the wrong way round the riving knife will be offset, and will foul the workpiece. It's easy to see which way is right if you try them either side.

Pics to follow. It's not a great mechanical arrangement. Be aware that if the riving knife's Z-shaped mounting plate gets bent, it causes all sorts of issues. DAMHIK!

I think the riving knife mounting plate is the weakest part of a poor design. You have to consider though that it's built down to a price, and good engineering costs money. Either you pay a lot more, or, like me, you buy something with good basic functionality and either live with the limitations or attempt to improve them.

In my case, I'm not reviewing the saw, merely trying to improve it for my own use. What I'm doing to mine I'm not going to discuss here, suffice it to say improving the riving knife arrangements are a big part of it.

I'm only going to consider the riving knife mounting, and points I think you must carefully take into account when fitting a knife to an unfamiliar machine. I must emphasize that I AM A NOVICE AT THIS, and you make your own judgements as to safety, etc. 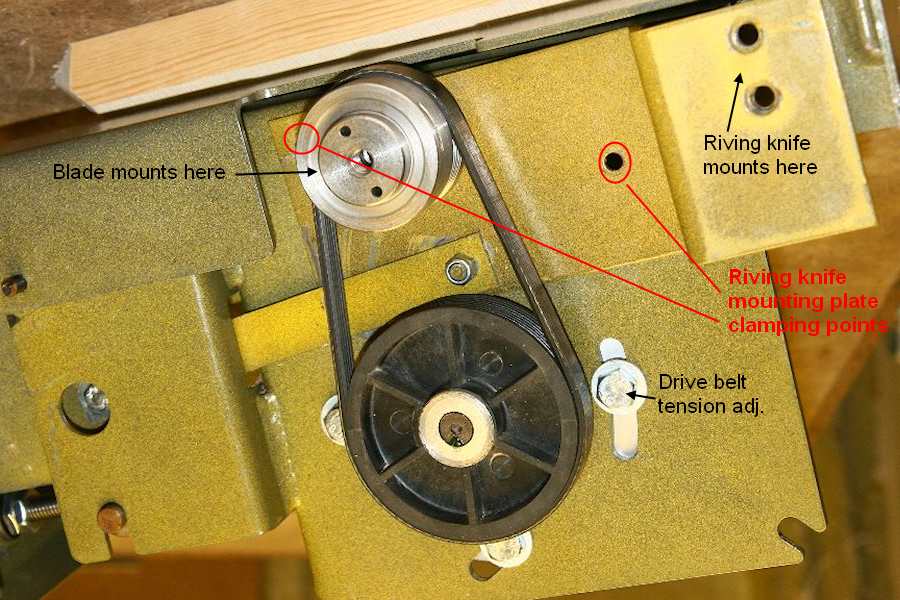 This shot shows the main assembly, partially dismantled so you can see a bit of what's going on. The front of the saw (with the controls) is to the left, and the outfeed table would be to the right. As it's on on the workbench, it's hard to see how it goes together, but 'up' in the picture (where the block of wood is) is above the table in use.

The sawdust deflector is removed, showing the arbour and drive belt, and the Z-shaped riving knife mounting plate. In the foreground is the heavy, datum plate to which the motor and arbour attach. It's welded (LHS) to the frame of the lift/lower mechanism.

The riving knife mounting plate goes under the saw blade arbour (the pulley that mounts the saw blade and drives it), and pivots on the same axis. It clamps loosely to the datum plate through the two holes marked in red. These also mount the sawdust deflector (which is stood off the datum plate on pillars and isn't in the photograph as it would hide everything!). EDIT: I forgot earlier to say that the thickness of the sawdust deflector is included in the riving knife alignment, as it's also clamped by the riving knife mounting bolts. I'll come back to the pillars in a moment...

There's a strap of thin metal (under the LHS of the belt), which makes the riving knife pivot as you raise and lower the saw. These often bend when people try to move the blade up or down beyond its limits, or if either the riving knife or upper blade guard (the plastic one fixed onto the top of the riving knife in use) gets heavily knocked in use. If it bends, the riving knife will not raise or lower easily, and the strap may foul the drive belt and damage it (there's very little clearance). Make sure it's straight, and the Nyloc nut holding it to the riving knife mounting plate is tight enough to hold it without wobble, but loose enough so that it can pivot freely. My nut+bolt factor tells me that Nyloc nuts are intended to be single-use, so if it looks worn, replace it (M6).

Back to the sawdust deflector: It's a PITA, because you have to remove it to change the drive belt, and it determines how rigidly the riving knife mounting plate is held to the datum plate. You'll see in the picture below two holes in the riving knife mounting plate (the ones marked in red in the first picture). These are where the sawdust deflector's mounting pillars go. Underneath the mounting plate there are semicircular slots in the datum plate, and the threaded parts of the pillars move round in these. It's part of how the riving knife 'follows' the saw blade as you raise and lower it in the table; the other necessary part is the thin strap (you can see it clearly below).

Like the strap, these threaded pillars have Nyloc nuts, and the tightness is absolutely critical to safety. Too tight and the lift-lower mechanism will stick; too loose and the riving knife can flap about either side of the saw blade. So you need to check their tightness.

Sorry, I don't have photos for this at the moment. On an assembled saw, unplug it first. Standing in the usual operating position, put the blade DOWN into the saw, and vertical. Remove the left-hand side panel. You'll see mainly the motor and the other side of the blade mounting ("back" of the picture above). There should only be two Nyloc nuts visible (with washers), just above the motor on the datum plate. Those are they. Adjust carefully (10mm socket with extension bar or long box spanner, probably), so that the lift-lower mechanism doesn't bind, but that the sawdust guard and the riving knife mounting plate don't wobble noticeably. Again, if they look at all manky (chewed-up corners of the nuts, etc.) REPLACE THEM (M6), and their washers.

Right! Back to the riving knife itself:

The picture below now ought to make sense! It shows just the riving knife mounting system, with the blade, etc. drawn-in (and the sawdust deflector also not shown for clarity). When you've assembled the saw, check the riving knife with a straight edge, for parallelism with the blade (power NOT applied!!!). If there is any twist, either up-down or left-right, chances are that either the knife itself or its mounting plate have been bent. 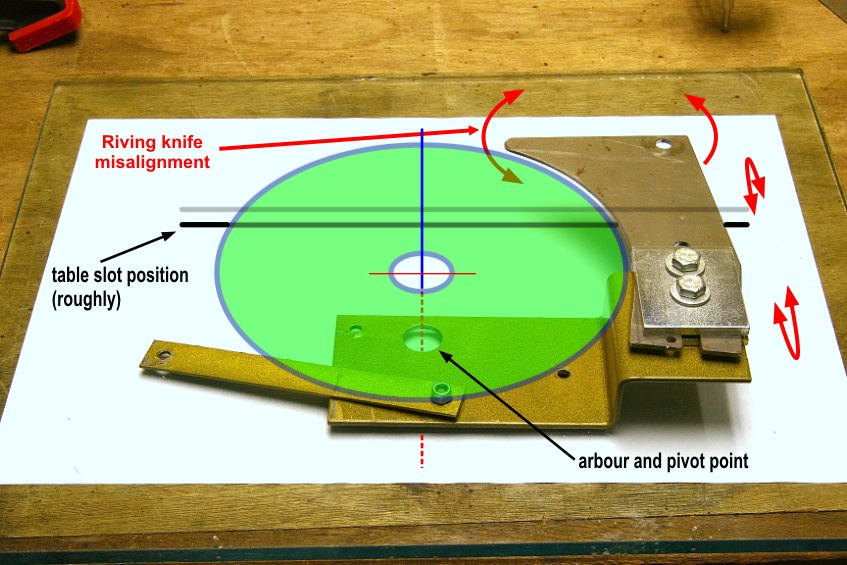 You can find out which by putting the riving knife on a very flat surface, and checking for flatness: does it wobble? can you see light underneath it? I use the piece of plate glass I do Scary Sharp on. If it's not the knife it's the mounting plate. In either case you probably need a replacement.

Alignment: In my first picture, the flange against which the saw blade itself clamps is obvious on the arbour (under the head of the black arrow). With the correct packing piece (edit) on top of the sawdust deflector and next to the riving knife mounting plate, that packer's surface should be exactly coplanar with the that flange on the arbour. You have to check this with a straightedge. Technically it should be slightly to the left of the flange, but that's only valid for a single thickness of saw blade. If you accept a riving knife that matches the thickness of the disk of the saw blade, then they should be coplanar.

I think this is hard to check with the saw assembled, but, if you don't get the alignment you expect and everything else is correct, it's worth a try.

Riving knife spacers/packers: mine are two different thicknesses. I think this is so that you can mount different-thickness riving knives, but I'm not sure. The outer one plays no part in alignment - it only holds the knife tight. The one between the knife and the mounting plate positions it correctly. If the knife won't align first go, swap them and try again. If it still won't, you may have a problem with the mounting plate.

I hope that's useful - probably way too much info, but now you do know about it! Hopefully, yours will just bolt back together easily and be properly aligned immediately. If not, you now know where to look for problems!

I would be interested in a WIP of how you are changing your saw.