I have a cheap scroll saw, but don't use it a lot, but I happened to see a Meddings advertised locally for a reasonable price. I didn't realise what a monster machine it was. I imagined from the ad. it was about half the size
Here's a picture of getting it out of the back of the car. 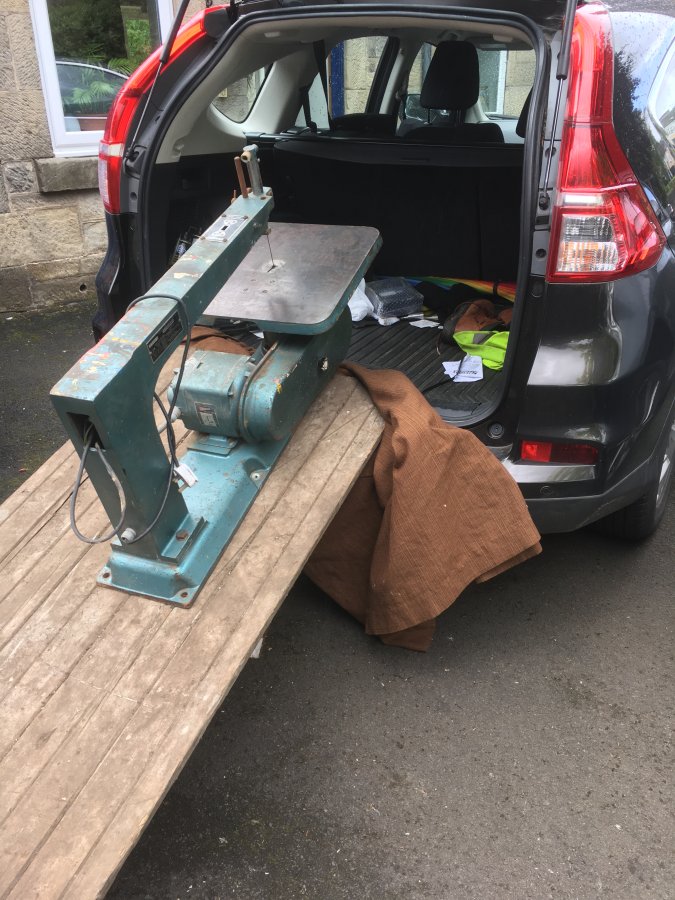 It's in reasonable condition. No stand (fortunately), single phase, all working OK. The spring foot is missing, but I can make something. The main problem is the shaft on the reciprocating drive has been mangled a bit due to the grub screw coming loose and the shaft being quite soft. By the look of the pully, a previous owner has solved the problem by belting it with a hammer. I was able to remove the pully and machine it on the lathe to make it look a bit better, but the pully is a bit worn and slightly oversize. My usual method to overcome this, is a wrap of copper tape on the shaft and see if it's going to hold. The reciprocating mechanism seems to be in really good condition despite the abuse. I don't want to take it to bits unless I really have to.
Does anyone else have one of these monsters? There is virtually no information about the machine on the internet that I can find. 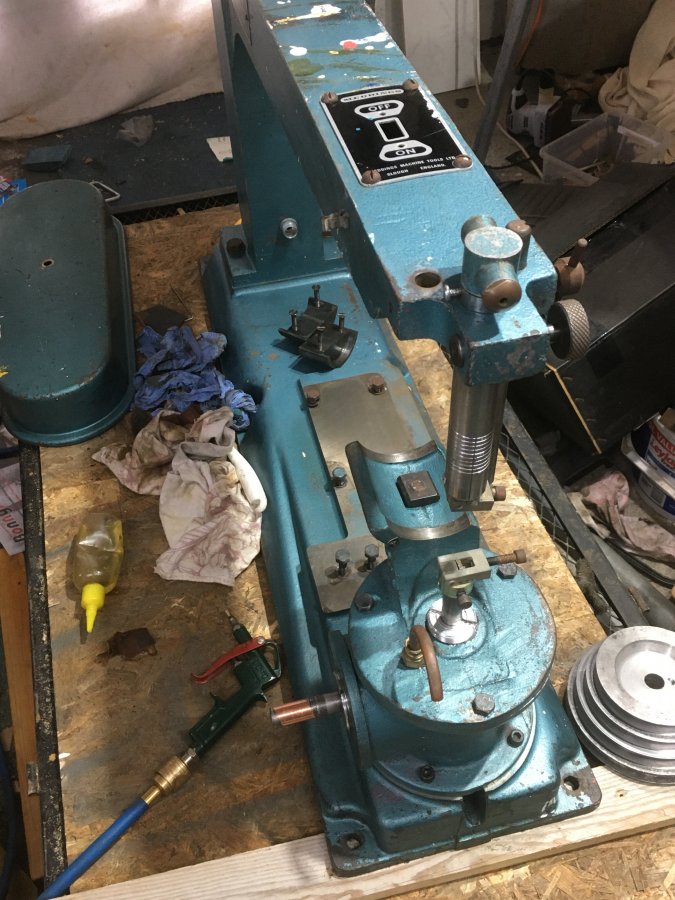 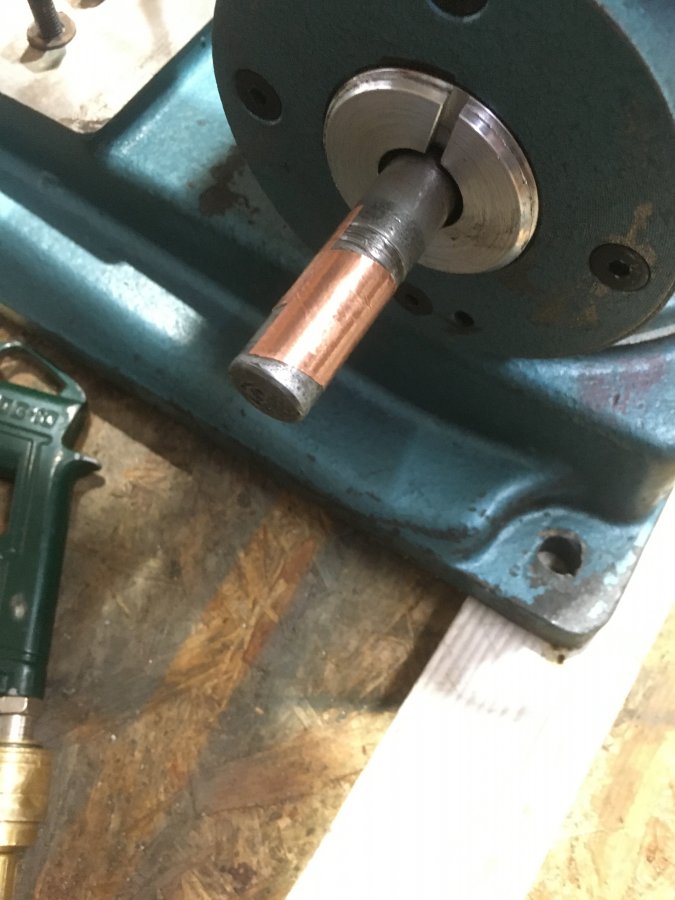 Looks like you are doing a good restoration of that.
From looking at your pics it has pinless blade clamps so it will take standard scrollsaw blades.
It will also take coping saw blades as mine does.
This machine has plenty of power and will easily cut wood ,steel plastics etc with the right blades,a good 25” throat for bigger projects too!,

I just give things a really good clean and repair what's needed to get it working well, but just getting the years of dust and oil off it made it look better. Years of neglect.
The saw does take pinless blades, but I'm not sure how I could fit a blade with pins. There only seems to be a screw clamp at top and bottom. I'm also confused about the top blade support. It doubles as the air pump, with spring loading to resist the movement of the blade downwards. The inner part moves about 100mm and the the support is adjustable 100mm up/down and has a scale marked on part it. The scale is from 5 to 10 and the distance between top and bottom marks is 28mm. Can someone tell me what the scale is for? 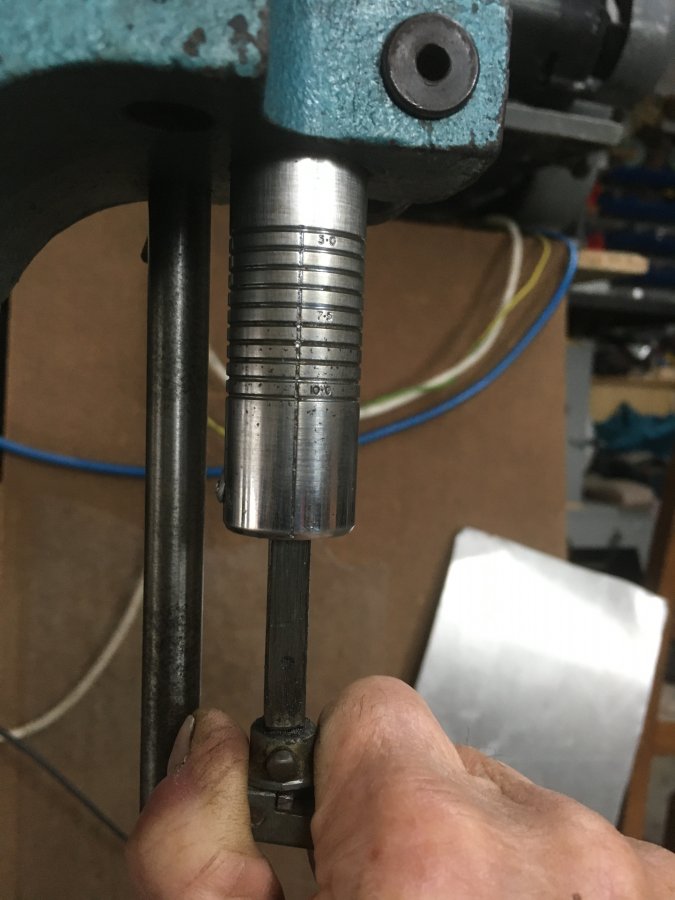 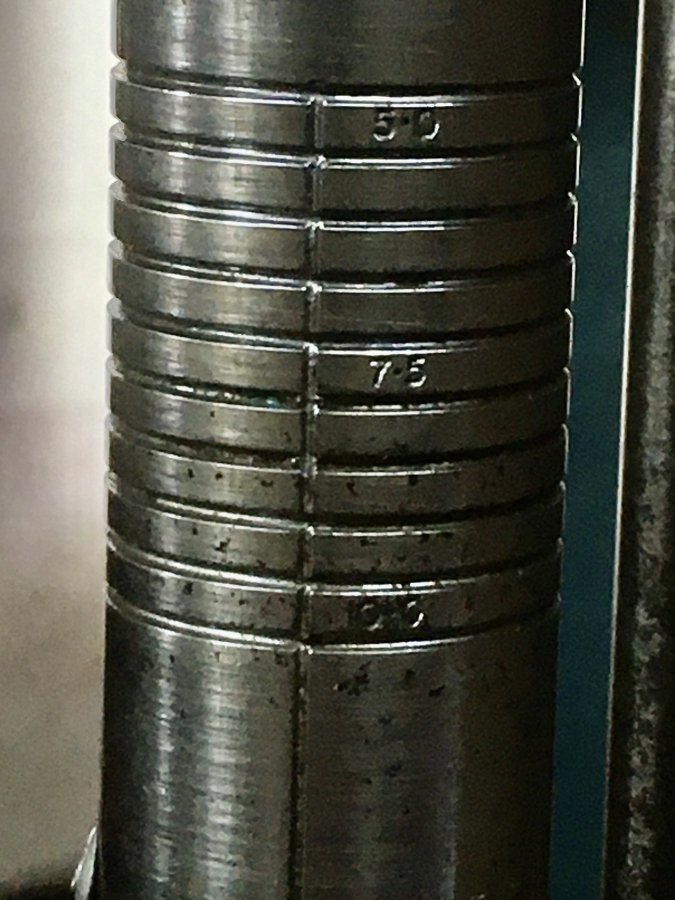 I don't normally do any kind of instructions, but there is virtually no information on the Meddings Scroll saw on the internet, so I hope this might be useful for anyone who has to work on the saw. (probable me in 6 months time). I will do it over several postings as I have time, It took a couple of days to dis-assemble, fix the problem then re-assemble.

I got the saw running with my copper tape mod. It ran for about 5 min, then the pulley started slipping again. Looking at the pulley bore, It was worn more than the copper tape would compensate for. When I checked the rotary motion, there was a real stiff part as the shaft moved up. Time for a re-think. The pulley shaft was quite damaged, but it still measured 5/8" in most places. I hoped I could dis-assemble the shaft so I could get it on the lathe,
I disassembled the unit to see how it all fitted together. 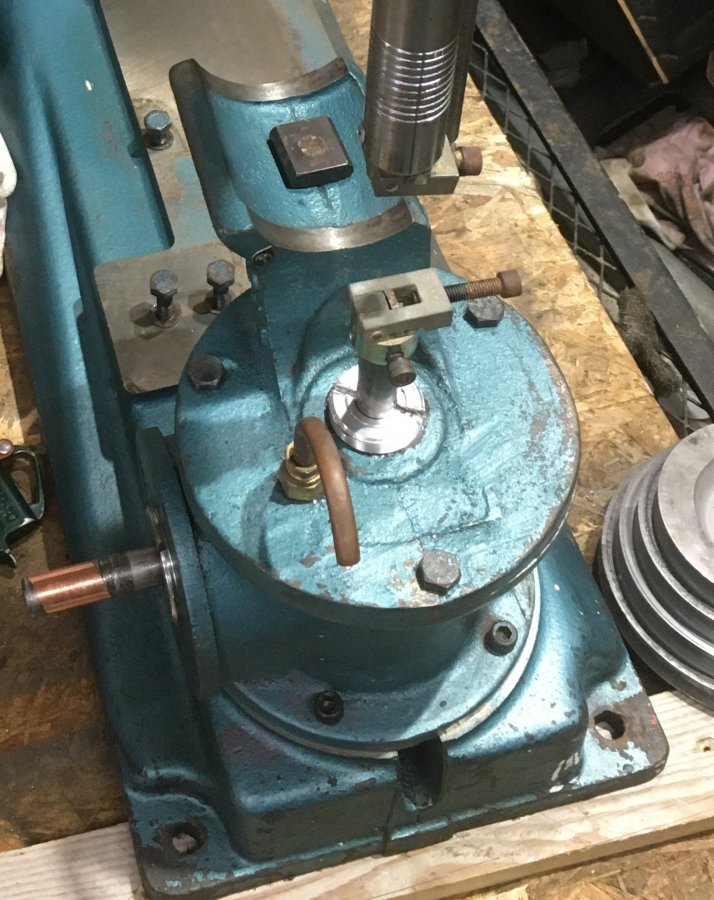 The drive shaft goes into the reciprocating drive mechanism, which I discovered is a Scotch yoke with sliding block. The pic above shows the oil sump which holds all the mechanical parts. Three bolts hold the top on and four allen bolts secure the sump to the body of the saw. 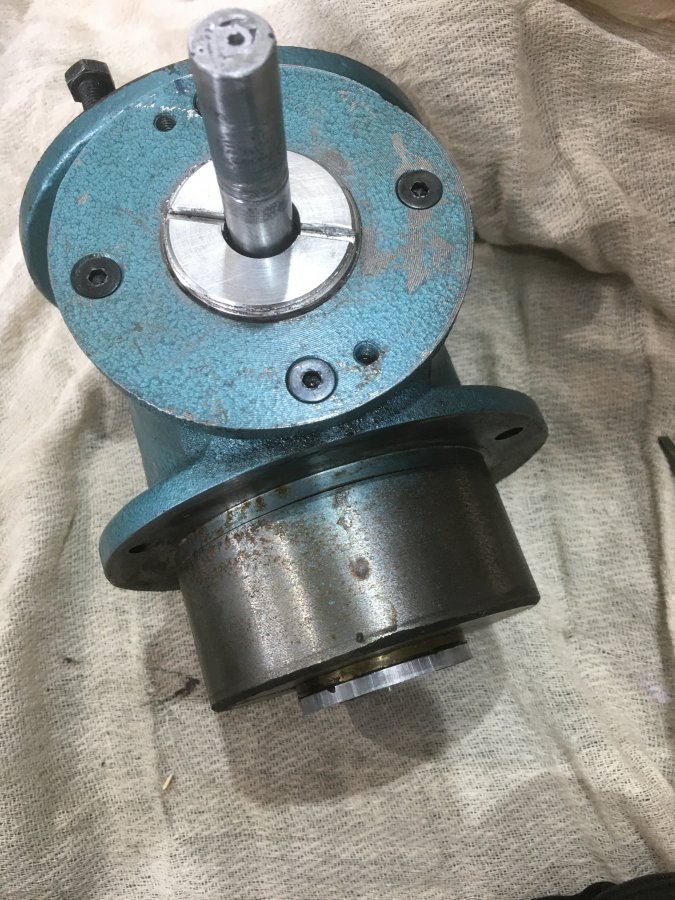 Sump removed with top off, looking at the input shaft. Four allen screws hold the drive shaft to the sump. Drain any oil in the sump and remove the screws. Once removed it is a very tight fit, so tap around the drive shaft flange to remove it. 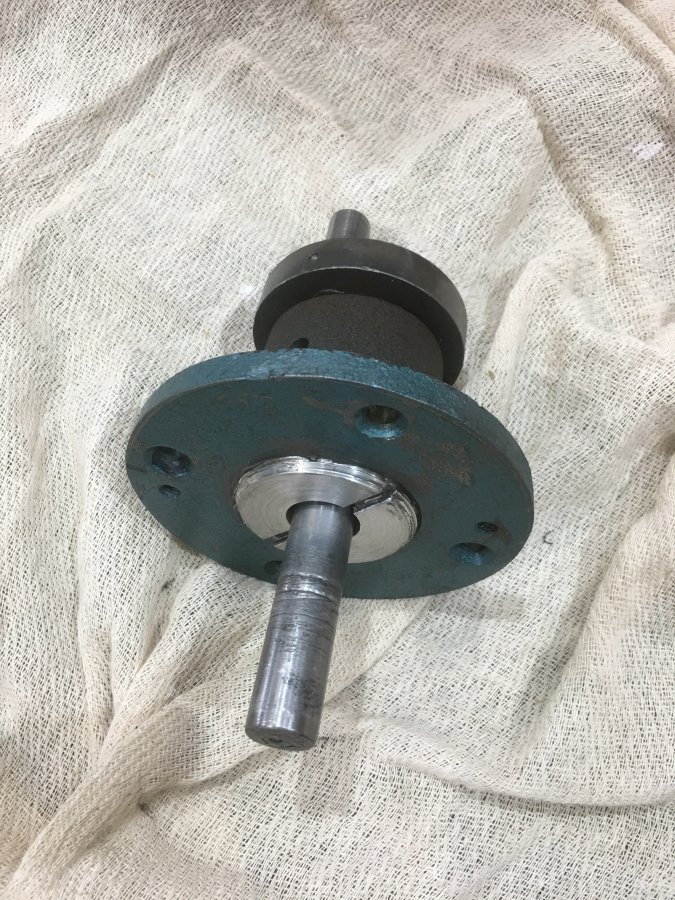 Drive assembly removed with the crank at the top end. The aluminium seal support has a sneaky grub screw (bottom hole in the pic below),which stops it from revolving. Once that is loosened, the aluminium support can be removed. The upper hole in the picture below gives access to another grub screw which holds a bearing spacer in place. Just slacked the grub screw don't do as I dis and try to remove it. It will fall inside the bearing assemble which will be sticky with oil, so it might get lost. 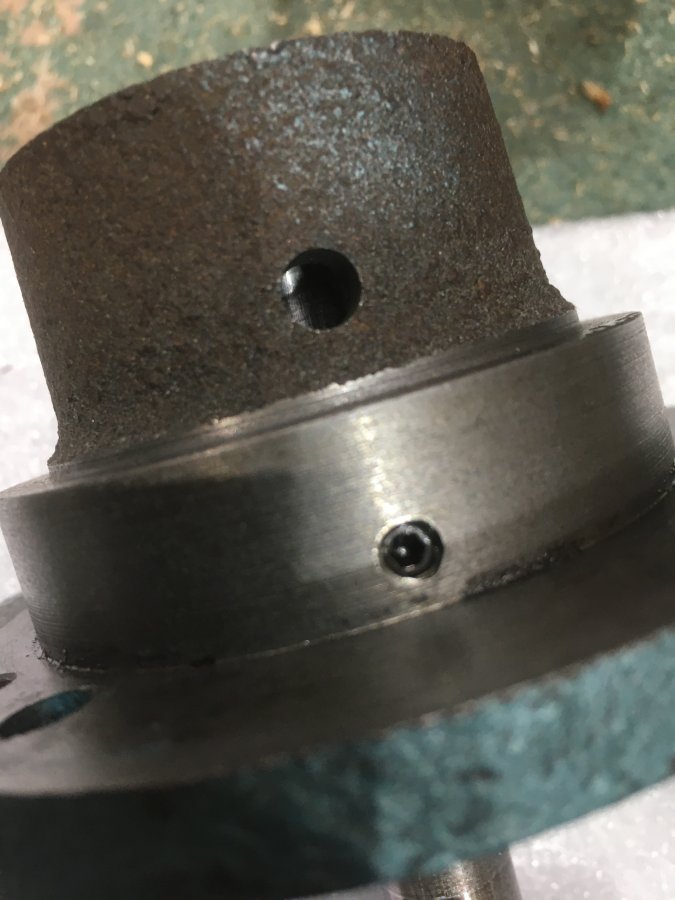 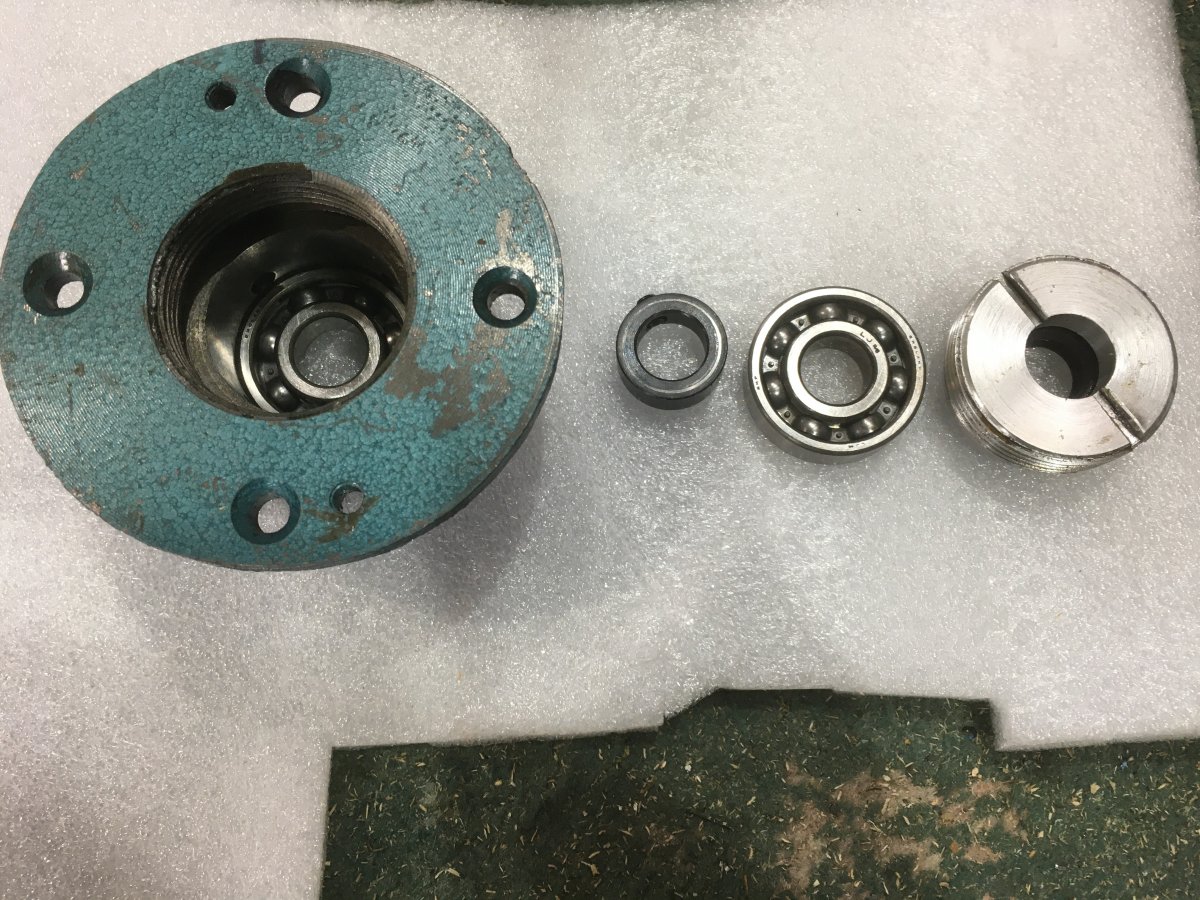 The bearings slide off OK. just gentle tapping is enough. I found that the drive shaft was splayed at the end from being hit with a hammer. I had to use the small crank on the shaft to turn it whilst holding a file to put a slight taper on the end so I could get the shaft through the bearing. 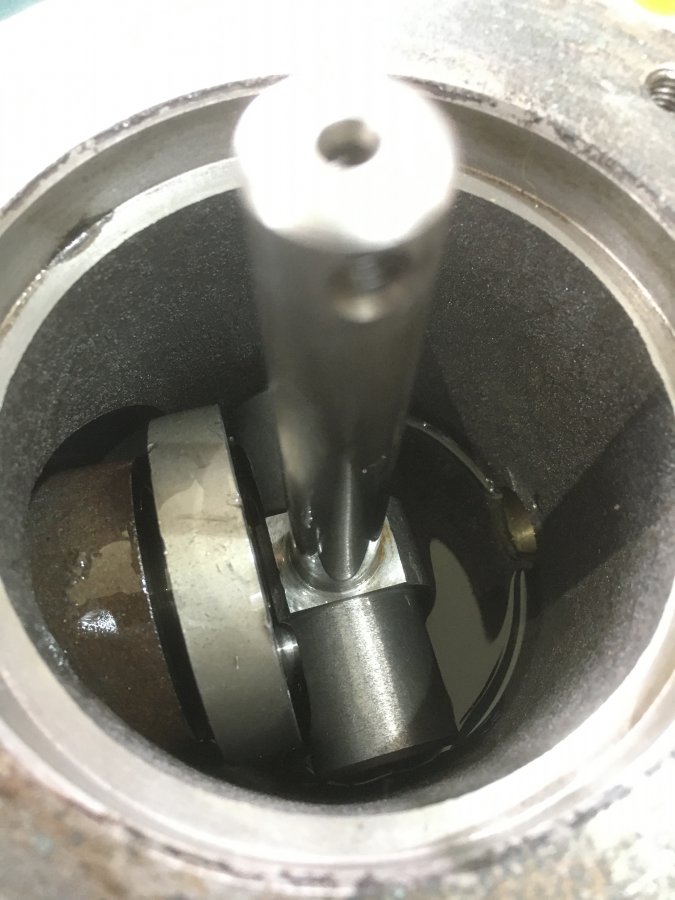 View in from the drive shaft port. 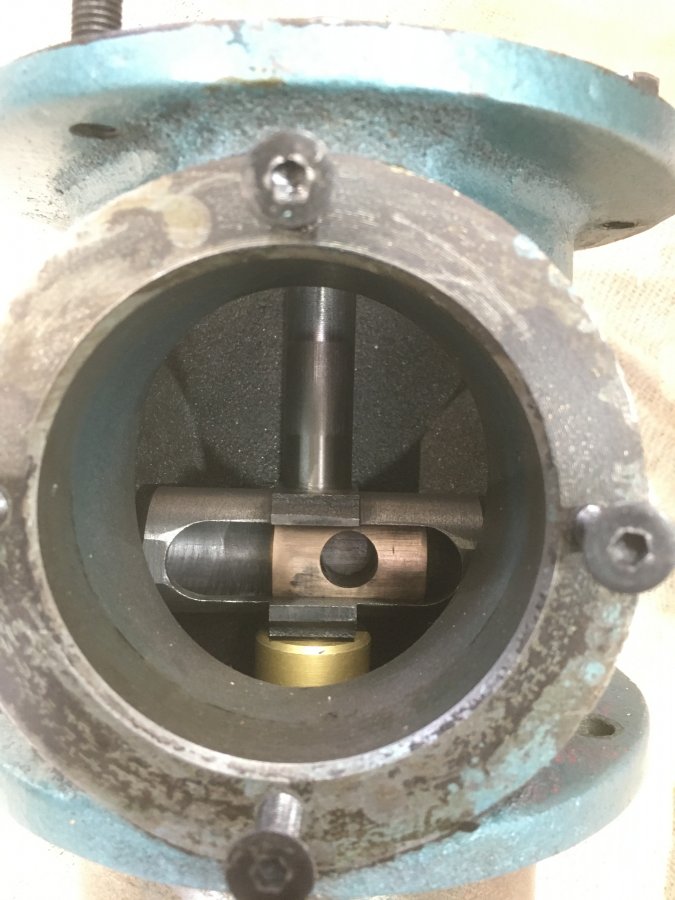 This shows where the crank of the drive shaft goes into the sliding brass block. This was the source of the stiff motion of the drive. There was some wear on the sliding block hole where the crank had been rubbing. The plan was to rotate the sliding block through 360deg. horizontal because there was less wear on the other side. This cause problems, because there were high spots on the brass block which jammed. Lots and lots of gentle filing and checking using an indelible marker to show tight spots did the trick and soon the brass block was sliding freely. 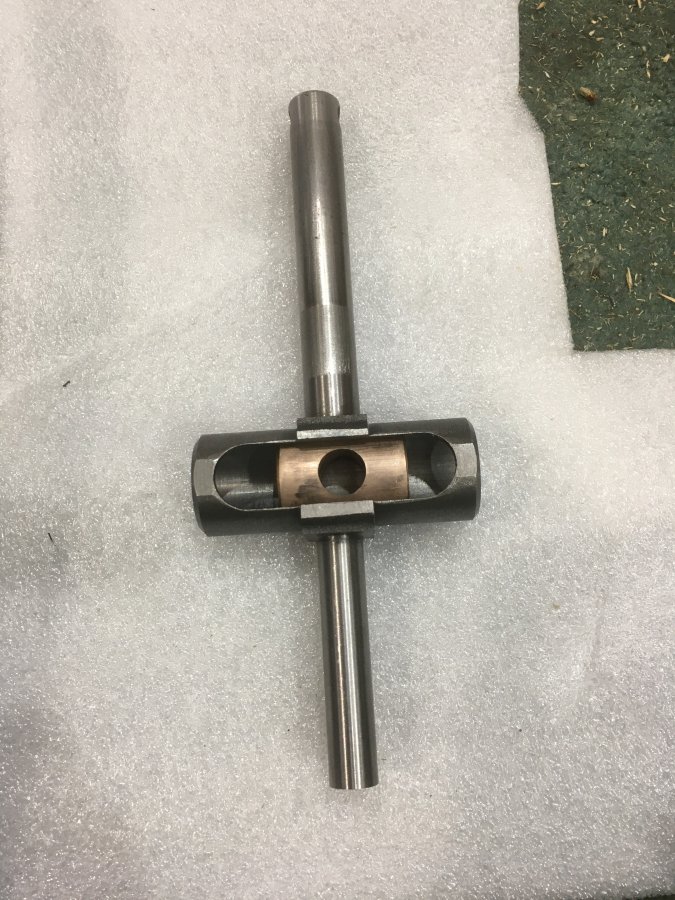 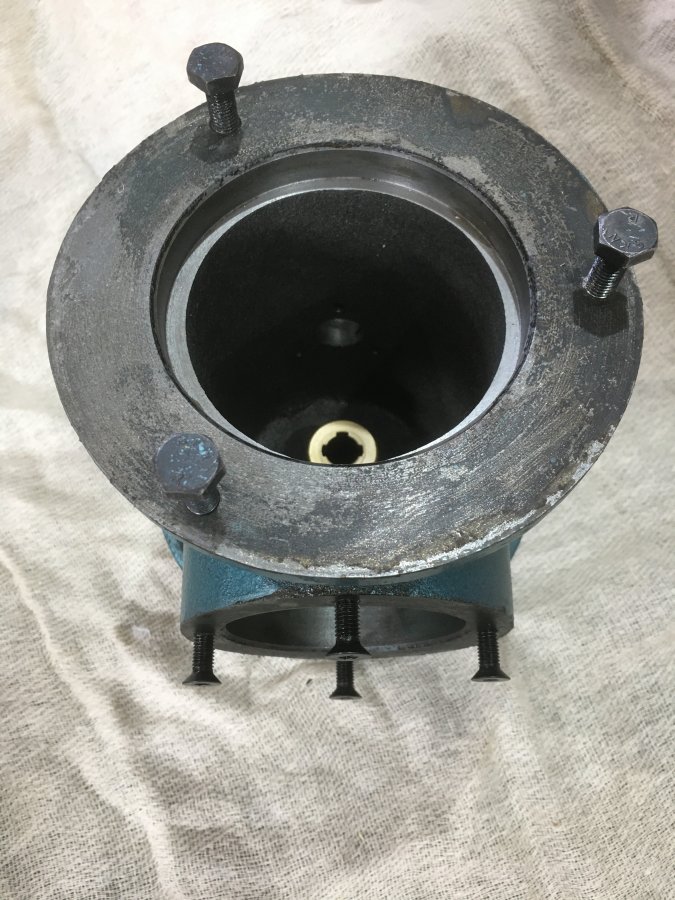 In the bottom of the sump is the bush for the lower part of the vertical shaft. It has slots cut so oil can flow when the shaft goes up and down.

At the bottom of the sump is a drain plug with taper hole, so a plug was printed on the 3D printer. 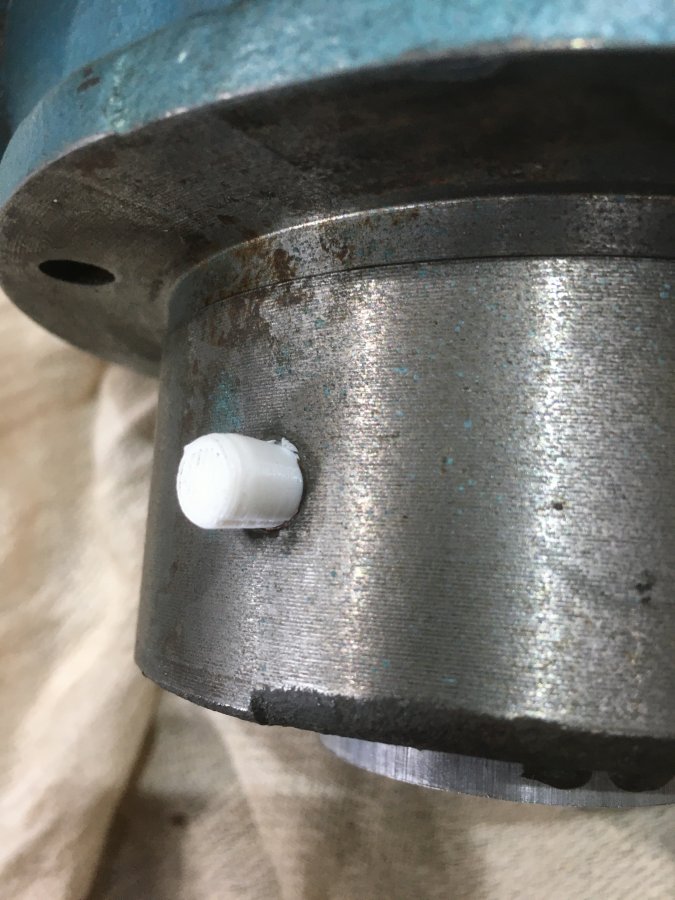 The next stage was to fix the shaft and pulley. When checked, the shaft was still pretty close to it's original size with some bits hacked out of it. I decided to make a sleeve to fit between the shaft and the pulley. I only has 1" square stock, so it took ages to turn it down to 20mm, which was the largest I could make the bore of the pulley without weakening it too much. I then bored the sleeve to fit the 5/8" shaft 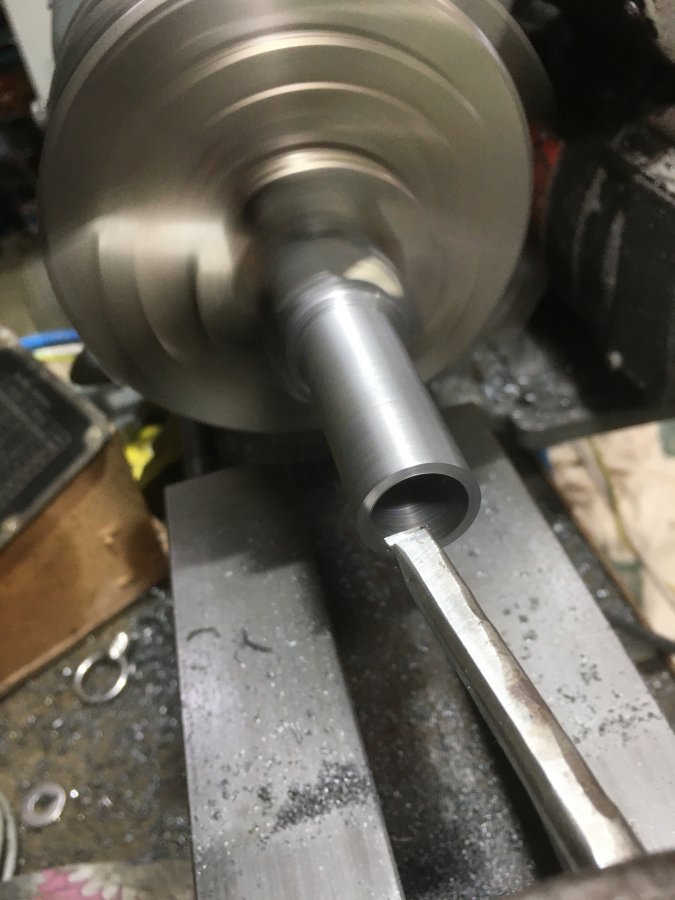 I decided to attach the sleeve to the shaft with 4off 4mm grub screws and drill a clearance hole for the grub screw of the pulley. 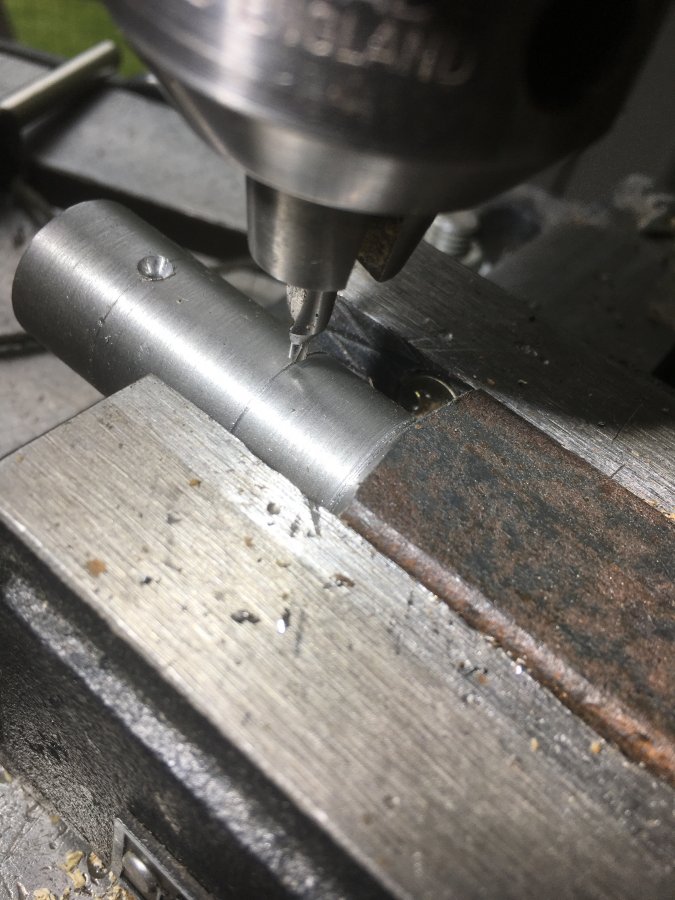 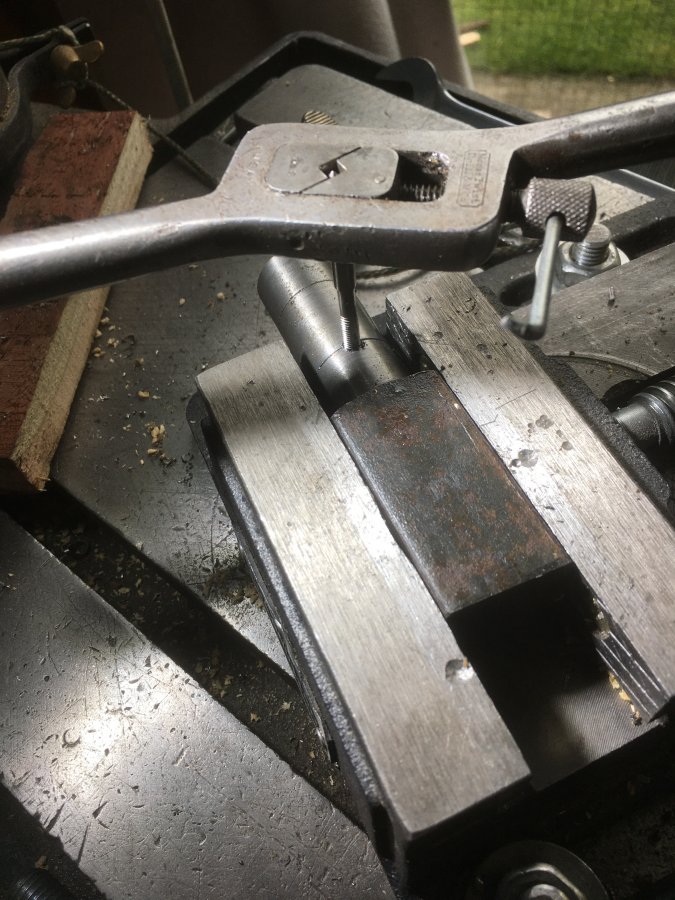 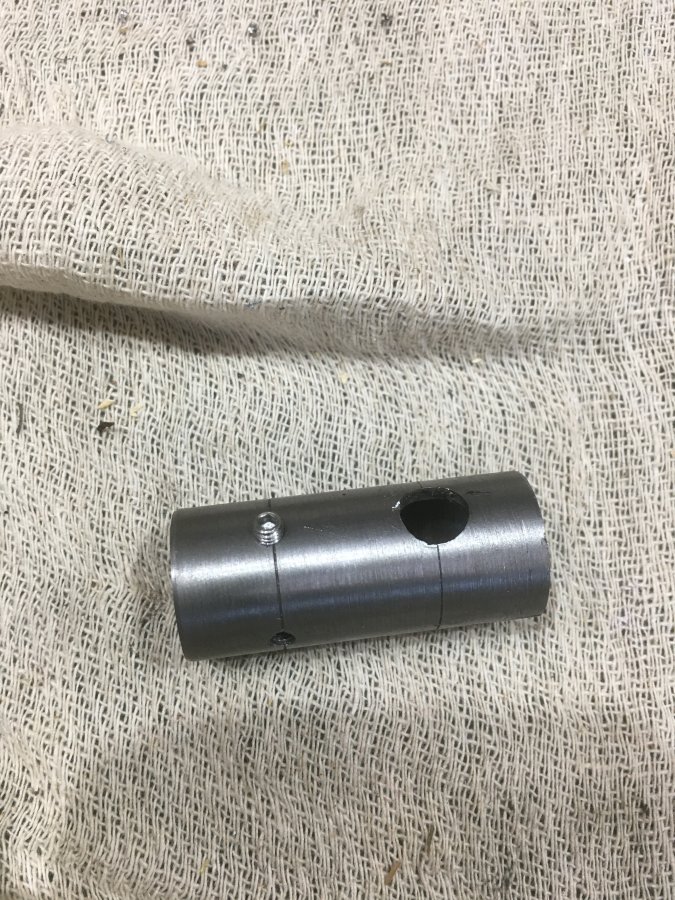 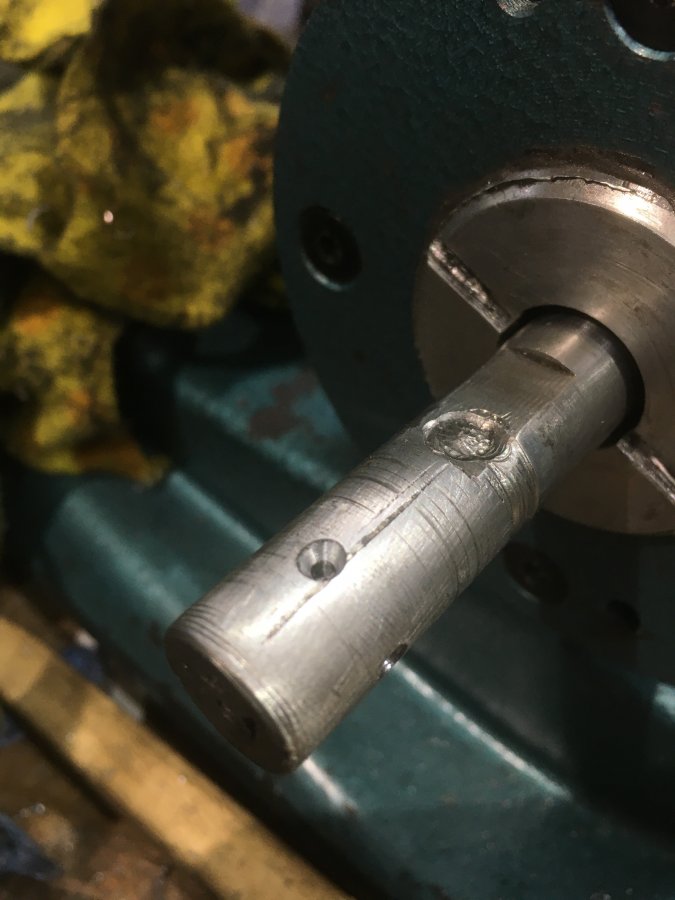 relief holes on shaft for grub screws. They have to be flush. 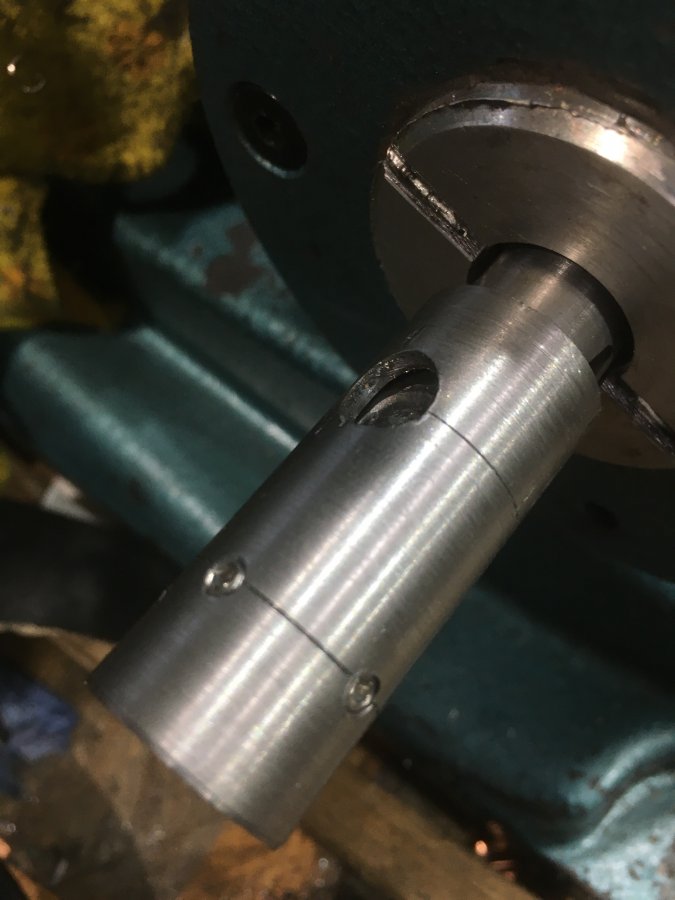 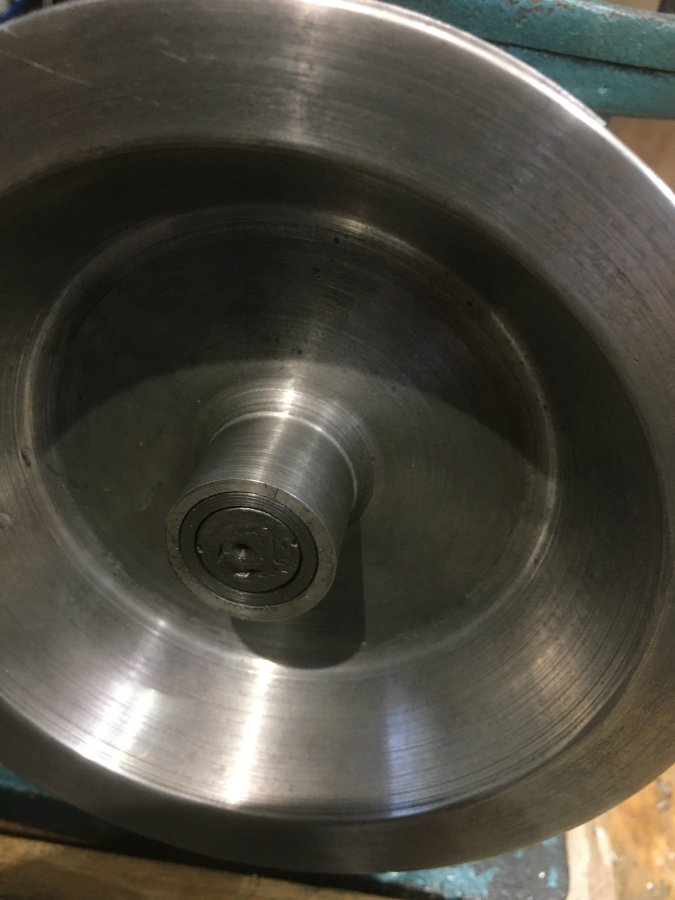 One problem I had was trying to centre the pulley on the lathe. I don't have a large enough independent jaw chuck to get it centred properly, but it's pretty close. and the machine runs like a sewing machine now.

Next stage is to reassemble everything and try the saw.

Nice project and great work by yourself

About 20 years ago I picked up an old Rockwell scroll saw which at that stage was already 30 years old and not looked after. No motor, so I had to source a motor and had pulleys made. Also had the oil filled "sump"
It took pinned blades for scrolling and also jigsaw blades which gave far more accurate cutting and control than a jigsaw.
I eventually replaced it with 2 old Hegners, the large Polycut and smaller multicut. These were refurbished, sprayed same colour, some new parts imported. I had to replace the Polycut motor about 3 years ago, local source a quarter of the Hegner price before shipping and import duties.