A guitar neck. Quite smooth maple. Tung oil applied.
On end grain has left a white mark, looks like a water mark (isn't).


Suggestions how to remove it please, and any possible causes?
P

Most likely cause is glue residue, if you have any glue joints in the area. More sanding is the answer. Glue always shows under finish.

If it can't be glue I'd need a picture to make other suggestions.

Clearly not glue, it's around the head of the guitar, nothing to glue.
S

Stray blobs or smears of glue can get into unexpected places, places that are long way from anything where glue was intentionally applied. It might be worth just double checking that it really isn't glue. Slainte.
P

As it's just a coat of oil, I'd take a scraper to the affected area until the white goes, then reapply oil.

And yes, glue likes to spread it's goodness around
B

Interestingly i had a bit of maple to plane up the other day. My first time with maple. I ran it through the thicknesser ( after flattening with planer ) and there were little grey splodges that remained until I'd taken off maybe 3 or 4mm. Is that normal with maple?
S

baldkev said:
Interestingly i had a bit of maple to plane up the other day. My first time with maple. I ran it through the thicknesser ( after flattening with planer ) and there were little grey splodges that remained until I'd taken off maybe 3 or 4mm. Is that normal with maple?
Click to expand...

Grey marks, small or extensive, may be a fungal stain. Sycamore, which is in in the same Acer genus is also therefore a maple, and maples in general are susceptible to rapid fungal (mould) attack if the wood surface gets wet and isn't subsequently dried off pretty rapidly.

So, in answer to your question, properly dried and stored maple sold as prime quality (or similar descriptions such as the American designation FAS) will (should) in general be fungus stain free, clear of discolouration, and essentially bright and white, with the occasional exception of things like mineral streaks. I suspect it's possible your wood has got surface moisture on it at some point after it was dried and stored and this surface moisture lingered for a while encouraging mould growth. I've witnessed a few times (maybe six or ten times) mould discolouration, some very limited and other times quite extensive, develop on sycamore and hard maple in as little as about half an hour to an hour after the dry wood got plenty of surface moisture on it.

You may be able to pinpoint a potential source of the likely surface moisture in your case, or maybe not. Maybe, for example, the wood got rained on and you didn't immediately take steps to dry the surface? Slainte.
Last edited: 23 Oct 2021
B

Fantastic reply, thank you, i love learning new things. Now I'll make sure i am careful with moisture when i buy m9re maple! I bought 3 boards from a guy in plymouth who had it left over after his kitchen build. It must have got wet at some point before my ownership, i stored them in my workshop, which is dry and has a dehumidifier. Hopefully next year I'll be doing a kitchen for myself, probably in maple and oak

Was the neck laquered previously or if new maybe had some sealer on it. A good sanding should sort it out.
Cheers
Andrew

the great waldo said:
Was the neck laquered previously or if new maybe had some sealer on it. A good sanding should sort it out.
Cheers
Andrew
Click to expand...

No, new wood. I suggested sanding, wondered if there was any experience here (there's quite a lot )
T

What brand was the neck ?

the great waldo said:
What brand was the neck ?
Click to expand...

Brand? It was Maple wood?
T

Did you make it yourself ? or did you buy it ? Sorry I should have made the question clearer also which kind of maple was it ?
Cheers
Andrew

Understood Andrew. Sorry, can't expand on that. A home made Gibson guitar bought as a kit? Not much help.
Doubtful if they say 'which' Maple? I'll ask.
T

The question really is - is it a Chinese kit ? some are ok and some are real rubbish. I bought one just to see how they were the body was ok apart from a few cracks in the end grain, had a really nice solid maple top. The neck was basically ok but had a real kink in the fingerboardd that can only be fixed by taking the fingerboard off and making a new one. If it is Chinese there could well be glue in the grain especially if it's in the end grain. That could sand out if it's not too deep. A photo (macro setting if possible) would help identify whats there.
Cheers
Andrew

Thanks Andrew. you could be right. The owner has promised to send a pic - but is not well atm.
Will do as and when.
I suspect Chinese....

Attached. Likely a Chinese import, though bought in UK. 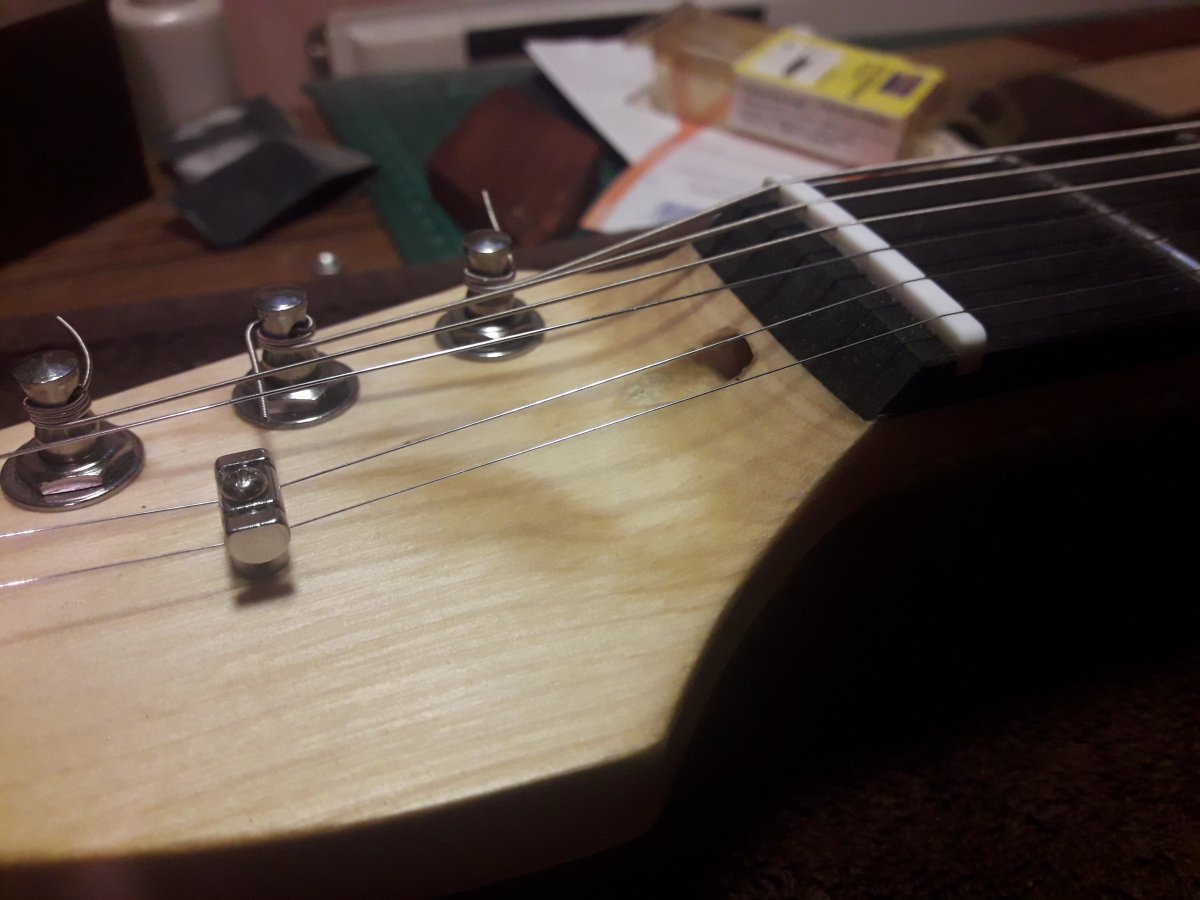 Hi Dave
That's deffinitely chinese. It looks like youv'e got a swirl in the grain which makes the wood look dark. Otherwise it looks ok. The only ways to fix that would be sand back a bit and bleach with oxalic acid to even the colour out a bit. If it gets too light a little stain something like golden oak (not too much) to give it a little bit of a vintage look (unless you've got a super strong sunlamp somewhere) I wouldn't tear my hair out over it, the guy probably paid peanuts for it and wants to have a "Fender" stratocaster on the cheap. I get plenty of guys turning up with Chinese guitar kits asking me to put them together and their jaws drop when you give them a price to do the work 3 times more than they paid for the kit as nothing fits together properly. It iritates me a bit when people turn up with something they have bought from china and screwed together and say they have "made a guitar"!! rant over! Please let me know how get on. I think the light patch in the picture isn't the light patch but more the dark patch.
Cheers
Andrew

Thanks Andrew, I'll pass that on.
Of note, sanded prior to the white marks appearing, which sounds odd. oxalic acid sounds good.

the great waldo said:
the guy probably paid peanuts for it and wants to have a "Fender" stratocaster on the cheap.
Click to expand...