Turns out there’s more to making miniatures than meets the eye!

A while ago I got a pack of 1095 shim stock to cut up into saw blades. It was an “assorted” pack, and apart from the thicknesses I really wanted (0.020 & 0.025”), it included a sheet each of 0.010 & 0.005 inch. I wasn’t much interested in the thin stuff & considered tossing it out, but then decided it might be of some use in making small-scale tools, something I’ve had an interest in for a long time, with an occasional dabble.

Then I stumbled on this & was inspired by to try making a 1/3rd scale saw. In my ignorance, I thought this scale would be an easy place to begin at & certainly a whole lot easier than 1/12 scale, which is something I have been considering.

I started out to make a “working” model of one of my dovetail saws (which is a loose copy of the smallest saw in the Benjamin Seaton chest).

The blade of this saw is 225mm long & 0.015” thick, & I thought I’d try using a piece of the 5 thou plate, which would have been just right in terms of scale, but it was far too flimsy & even my finest file caught on the edges & buckled a couple of teeth slightly. So I went up a notch – after all, who is going to notice 0.005” difference without a micrometer ? The 10 thou plate worked much better, but I had to compromise on tooth size. The sharpest file I have is a #4-cut needle file, the corners of which look knife-sharp to the naked eye, but are in fact radiused, just like any other file. At a squeeze, it could have cut usable teeth at 30tpi, but the first lot I tried went so badly I dropped back to 24tpi. This is way out of scale, the ‘real thing’ is 15tpi, so my model should have 45tpi to be in scale. My eyes water at the thought!

The handle (from a scrap of Macassar ebony) presented few problems other than being so ridiculously small that even my modeller’s rasps struggled to fit the curves so much whittling & sanding ensued. I made a rough mock-up then attempted the real thing, which ended in a mess. I began with 7.5mm thick wood, which was ‘in scale’, but I ended up splitting off a large chunk when cutting the slot for the spine. For handle #3 I upped the thickness to a shade over 10mm & all went well, this time. I don’t think the extra thickness is obvious on a casual appraisal.

The saw bolts are also out of scale. The shanks should be around 1.5mm diameter, and the heads 3-3.5mm, but the smallest taps I have are 3mm, so that determined the shank size. To get enough area on the head & nut, I made them 5mm. They look too big if you compare with the original, & even more 'wrong' from the back side, where you can see how fat the bolts are compared with the diameter of the nuts.

At least the back is (roughly) in scale, that was relatively easy to do, and if you look quickly at the whole thing, it’s tolerably convincing.

It does saw wood, but it’s not easy to hold the handle between a thumb & index finger, so I won't be making any miniatures with it…

As a lesser challenge, I made a 2/3rd scale model, which was a bit easier to keep at or close to scale.

The saw plate thickness is “correct” at 10 thou, the bolts are not as grossly oversized (but still a little over what they should be), and the handle was far easier to manage!

It’s only twice as big as the 1/3rd scale saw, but looks a lot larger, and I can actually hold the handle in a traditional 3-finger grip (I have medium-small hands for a male).

This saw is quite usable and cuts smoothly & fast with its 24tpi. I think it will come in handy for making small stuff like doll’s house furniture for my grand-daughters. The baby saw will remain a curiosity – unlike some of the other scaled-down tools I’ve made, which are all very usable & handy at times. 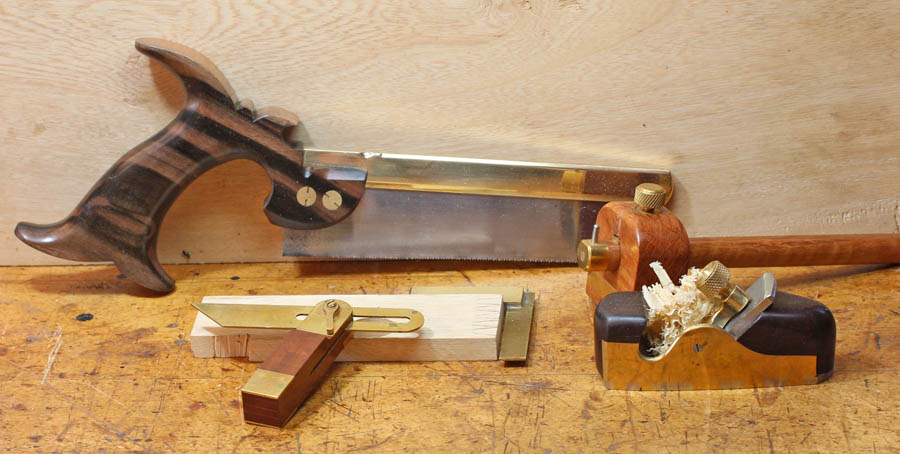 I learnt a few things from this exercise, in particular that accurate model-making (as opposed to rough facsimiles), has more challenges than I’d realised. I don’t have suitably small tools for some tasks & I would need a big re-think to tackle the 1/12 scale I’d eventually like to have a crack at. A working 1/12 scale infill plane would be way beyond my current skills & tooling. I can also see this is a rather deep & dangerous rabbit hole where a chap could lose himself forever.....

Hi Ian, there was a thread on here a while ago a guy had made tiny little tools and positioned them as if Barbie was using them, I couldn’t work out why he wasted as much time as he did but they were beautifully made. If you put Barbie into the search at the top of the page it will come up. Ian

Cabinetman said:
Hi Ian, there was a thread on here a while ago a guy had made tiny little tools and positioned them as if Barbie was using them, I couldn’t work out why he wasted as much time as he did but they were beautifully made. If you put Barbie into the search at the top of the page it will come up. Ian
Click to expand...

its an instagram thing and he does it with his daughter and her barbie collection.

Beautiful saws Ian. The Macassar ebony handles look stunning. I bet the smaller one is a great talking point and the kind of thing that would look great in a display cabinet along with some other miniature tools.

I think you've done an excellent job on the proportions of the saws. I imagine this is one of the most difficult things to achieve, as the miniatures get smaller finding the right materials must get harder and harder.

An old colleague had a fascination with making miniatures, people often think that because it's smaller its easier and quicker to make when in fact often its quite the opposite. He would come up with all sorts of jigs and methods for holding and cutting very small pieces. From what I've seen miniatures certainly throw up a fair few challenges along the way, something I'm dabbling in at the moment too.

They are brilliant Ian - nice one.
Not the same level of craftsmanship as yours, but on a similar vein I think there's something very satisfying about making miniatures.
Using my 3d printer I've designed the files from scratch on CAD as a learning curve / printed out and painted a few mini machines that sit on my desk at work.
I agree when you make something in a smaller scale it's definitely trickier to get it right, but it's good fun trying & making.
Cheers, Nick

Hattori-Hanzo said:
..... people often think that because it's smaller its easier and quicker to make when in fact often its quite the opposite....
Click to expand...

You're not wrong, Dan! It took far longer to make the tiny saw than the 2/3rd sized one, though some of the extra time was spent re-making the handle, or scratching my head over how to hold it while I shaped some of the curvy bits. The 2/3rd size was comparatively easy, my 'regular' tools weren't so clumsy & over-sized & it was big enough to hold in a vise while I worked on it. The teeny saw was another matter altogether, & I reckon to go smaller I would definitely need some smaller hand tools, and figure out ways to hold the work. Apart from the visual challenges that go with ageing, a set of clumsy, arthritic fingers comes with the package..

I need to do some more research & see how others solve the various problems when doing small-scale replicas, so I'll be interested to see what anyone else has come up with, & how they went about it. Or maybe I should just buy a 3D printer like Nick?

Nah, I know at least some 3D printers can make working models, but until I got the whim to make that tiny saw, all of the the other small tools I've made were meant to be used for small jobs: the little plane, square & marking gauge all see regular use, & I think the larger ebony saw is going to become a bit of a habit, too.

Making furniture was the primary pursuit that got me into woodworking, but I've long since made everything our house needs & my children don't have much interest in the sort of stuff I prefer to make - their "commissions" are usually elementary stuff I can bang together in a morning & give me little satisfaction. So I can see myself being drawn further into this small-scale stuff despite the practical side of me saying "Don't go there!" Maybe I'll make a small tool chest and fill it with miniaturised tools. I've always been fascinated by the old-style chests, with their beaten-up exteriors of some inexpensive wood, but beautifully fitted out & lavishly veneered inside. I considered making one for my regular tools, but decided a large cupboard was more practical and accessible, so a small-scale version of such a chest might be just the ticket. I'll be able to store it under the bed in the nursing home.

Unknown Hand tool - any ideas what it is?