Making a tap for wood

A few days ago, Prizen asked if anyone uses a metalwork lathe to help with their woodwork. Here's an example of the way I sometimes do.

Regular readers will know that my lathe is a nice old Barnes one, about a century old, powered by bread and cheese:

I have acquired a nice old Marples half inch size thread box for cutting threads in wood. Unfortunately it lacks a tap, which is why it was cheap. By cutting an external thread on a dowel, I could see that it has 7 threads per inch.

A tap for wood doesn't need to be especially hard to work ok, so I started by cutting off 4" of hex mild steel, and drilling holes in each end.

I set it up between centres on the lathe.

A bit of light treadling got the business end slightly round (as near as I could while keeping the outside diameter at a half inch) and a bit more established a reduced neck above that.

When that was done, I fitted up the right change gears to cut 7 tpi, fitted a suitable pointed tool at something like the right angle and started cutting the thread.

This needs some patience, as all cuts need to be very light. On the plus side there's no risk of over-running and crashing and it's easy to turn the lathe backwards so as not to lose the right position. (This lathe lacks any sophisticated stuff like graduated dials or a thread dial.) I had noticed that the thread form was not quite symmetrical - it was more of a buttress style thread. It was easy to follow that, when everything is freely adjustable. Here's the thread nearly finished.

The next thing was to cut some flutes along the axis. I don't have a milling machine, but continued on the lathe. I locked up the gearing and turned the HSS cutter through 90 degrees. Then I just wound the tool holder along the bed towards the headstock, advancing it very slightly each time, so as to just shave the metal off by hand. Here you can see a groove developing. The thread looks alarmingly messy in this close-up - it's not really that bad in real life!

Then it was back to the lathe for a spot of hand filing, trying to make sure there was some sort of systematic shaping to the starts of the cutting surfaces.

I also popped it back on the lathe to taper the end a bit more.

And here is the result. Not the prettiest but it worked.

That's a test hole in a bit of beech.

I had been intending to drill for a crossbar, but for the test I used a socket wrench instead. This worked ok, so I decided not to bother with anything else and just take advantage of the hex stock.

All in all, a pleasant way to spend an afternoon playing. Coming up soon - the tap and box in use together!

Nicely done. The 6 points from using hex stock should cause less tear out while tapping. Does it? I think knowing how is involved I would have used a steel that could be hardened. No problem if not making a lot of threads.

Tapping wood threads was never much of an issue for us but getting good threads from the thread boxes was. Some people use a router like the Beall accessory effectively. My father went a different route and wanted to use the table saw. I had a blade modified with 60º tips and he made some bare bones sleds that cut perfect threads. He even made a 4" x 4TPI one just to see if he could.

That's a lovely bit of kit Andy, you really don't need to go to the gym when you've got one of those!

Is the belt clipper laced? There's no noise as nice as the gentle click-clack of a clipper lace belt going round and round.

Thanks guys. Yes, in theory the six points help, but I think in this case I'm exploiting some rather loose tolerances...

Yes, it's a clipped together fabric belt, nice and quiet. I got it quite a few years ago now. You can read the whole excited story here

I'm very glad that I've got it.

I have a 7/8 tap and thread box; like yours, the thread box cuts an asymmetric thread. Taking the V cutter out, it is not symmetric - I presumed it was just badly made, and set it on one side to make another cutter when I get around to it. With the asymmetric thread, it presumably will only screw in from the right side ? I suppose it might be a useful feature for threads for clamps and vices, if you remember to cut the threads from the right side ?

Is there any chance the asymmetrical thread is to have a little extra strength when tightened?
M

Doesn't the asymmetrical thread simply mean that the cutting tool was not symmetrical with respect to the work?

There should in principle be a little asymmetry in the tool below the top, as the leading edge of the cutter should slant away at the same angle as the helix of the thread.

For precision metalwork these details need to be right but for your purpose Andy, not at all. I think that's a brilliant job!

I was thinking of a buttress type of thread but an out of kilter cutter would do it too.
See the illustration half a dozen frames down. https://www.wonkeedonkeetools.co.uk/vic ... king-vice/
I understand it is for a metal thread but it is always possible the maker of the wood thread had that in mind. Or just bad at sharpening the cutter. :wink:

If I remember right there is a write up on making wood taps in a TATHS journal Andy.
Cheers Andy

This is the Marples box:

I think it's superior to the common Chinese models available new from the usual places, because of the way that the cutter is mounted, secure but adjustable. If you take the cover off, you can see that the end of the cutter rests on a screw, accessible through the end of the box, so you can adjust how far it projects into the wood being threaded.

The back of it rests on two screws, just visible here, and is held in place by a screw from above

and clearer here from the outside

- between them, these control the angle of the cutter to the axis of the dowel.

There's no adjustment for the shape of the thread, that's a product of the way that the cutter is ground and sharpened. I'm pretty sure that the asymmetric thread shape is deliberate. It's not quite a buttress form, but I think the shape is for the same reason, to give more material behind the bearing surface. Frustratingly, I know I have read something recently about this feature, comparing it with the Beall system, and saying that the 60 degree shape given by the rotating cutter is not really ideal for wood, though we are all familiar with it from steel threads. I can't find where it was though. It wasn't in a TATHS newsletter or journal Andy - and a quick glance through them didn't yield anything. There is a piece by Roy Underhill in the Woodwright's Workbook which I read afterwards, but that starts with some forge work to make a cruciform shape for the tap.

Here is the shape of thread that this box makes:

About the same as the profile of a rip saw.

And here's the tap, showing that it's a close enough match.

The first project using these will be on show as soon as I have finished it, but probably not in the Metalwork section!

That was what I was thinking the thread looked like.

I agree that the 60º thread probably isn't the best form for wood but with a router cutting the thread it is the only way, that or 55º perhaps.

The table saw threading method my dad came up with could have that form ground into the blade and it probably would work for a square or modified square thread too. With the 60º any coarse threaded metal tap can be pressed into service. I might as well put the pics of the table saw stuff but it isn't meant as a highjack. 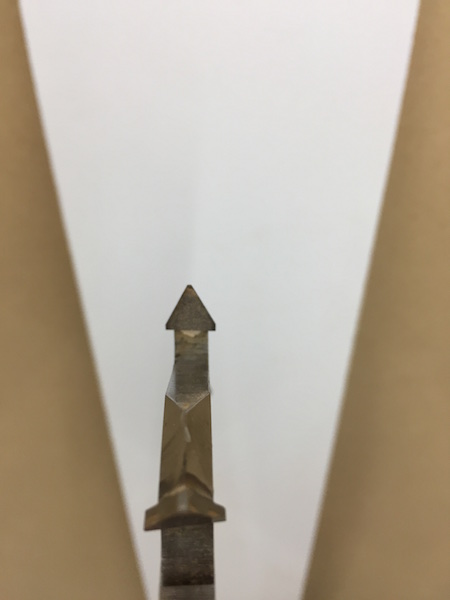 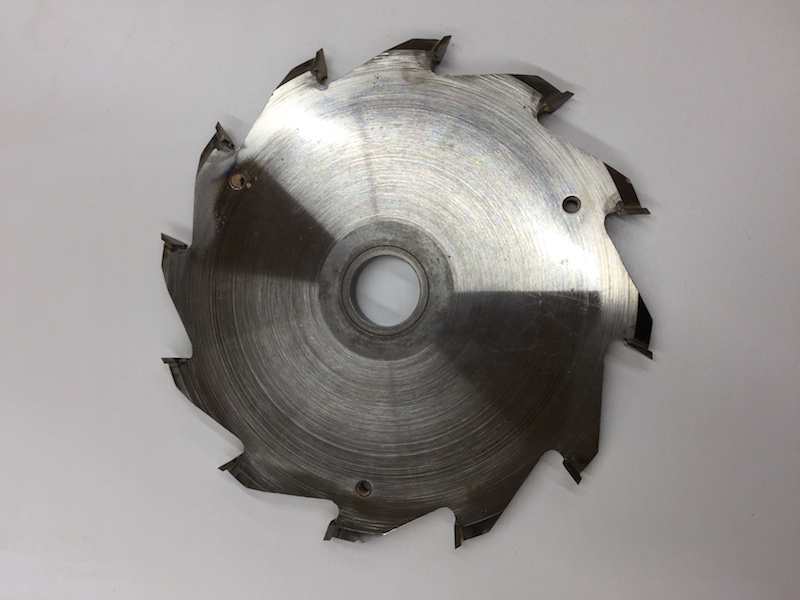 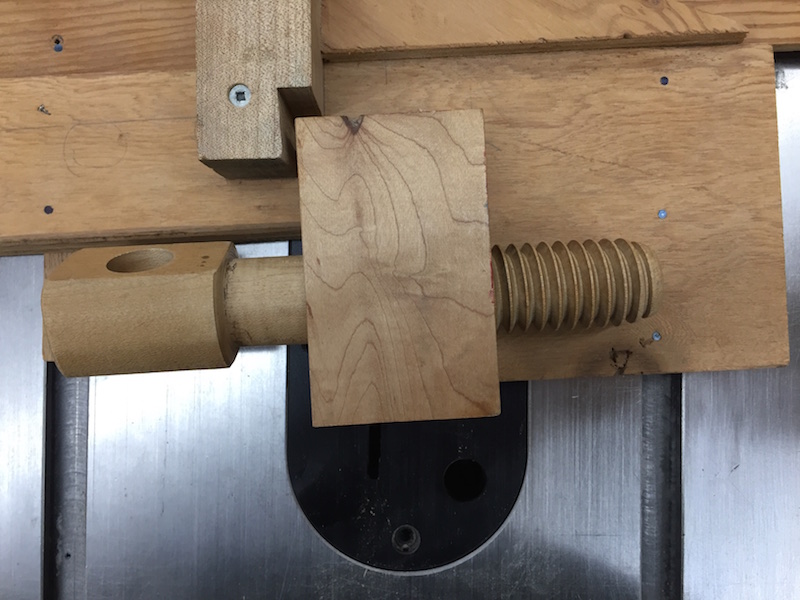 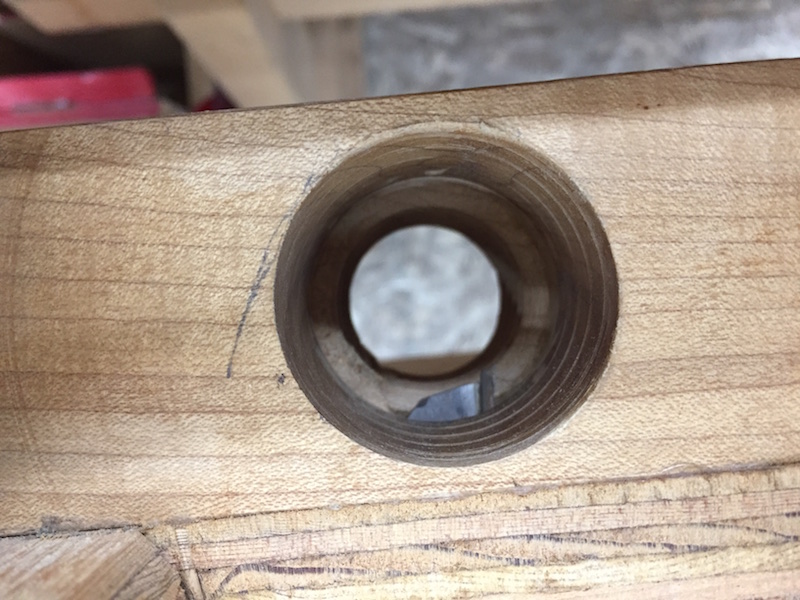 Now that's ingenious! And a method I've not seen before. Thanks for showing it.
X

Nice work Andy. Very ingenious to use the topslide as a shaper - I haven't seen that method before. Here are some taps made using my slightly larger Barnes lathe (electric motor driven as it is minus the treadle it would have had originally). I cut the flutes by milling.

Modern taps for wood have an angle of about 60 degrees. I have seen much larger angles on old wooden threads like this example from an olive press in Mallorca. I suppose that this one was made by drawing a helix and chiselling out the waste. I'd like to know how such large female threads were cut - a tap would require enormous effort to drive it.

rxh":3mqgvgbm said:
At a closer look you don't have a topslide so thread cutting is harder for you
Click to expand...

No, I can't use that excuse. I did approximately split the angle when cutting the thread, so as to mainly work down one side, but this doesn't feature in the photos.

I had a closer look at mine. I'm sure it is a poorly made replacement V cutter - it is too prominent for a start, sticking out a long way beyond the wooden threads. But the give away is the tap, which is a symmetrical 60 degree triangular thread profile. Interesting design on the tap - it is bored out up the middle, with cross-drillings to make the cutting edge, and somewhere for the shaving to go. 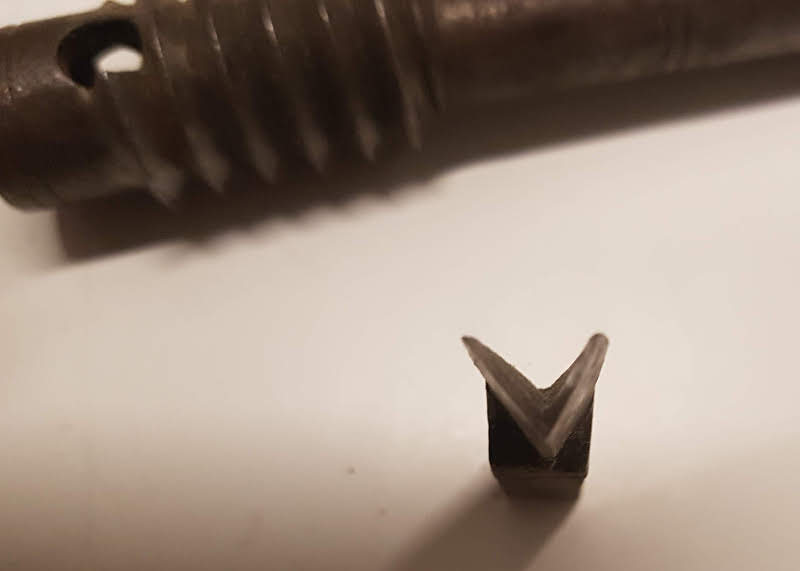 Drilling and Tapping behind a threaded hole (aligning/clocking a tap?)
2