I got a bee in my bonnet a little while ago & started making miniature tools, just for the challenge. The most ambitious one to date is a half-sized plough plane based on one I acquired about 30 years ago. It came to me in very rough shape, and someone has removed all traces the maker's stamp, but from its lines & construction, I'm fairly sure it's a Sandusky, a well-respected brand in North America. The wood is definitely a Dalbergia of some sort, presumably Brazilian rosewood: 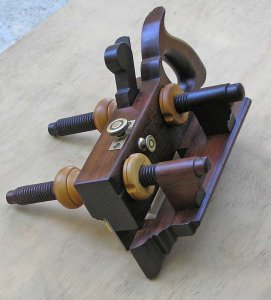 When I got it, it was in very poor shape, with one fence arm broken beyond repair. I eventually figured out a way to make a new one & re-furbished it to a good working plane but that's a story on its own.

Although it looks smaller, my miniaturised version is actually half-scale, though I took a few small liberties with some parts. For example the screw for the depth-stop mechanism should be ~3mm to make it half the diameter of the original, but I judged that a bit too flexible (the locking screw presses against the shaft of the screw to lock it in position) so I made it 4mm. The original is cast as a single piece, but I had to fabricate the model by riveting the sole-plate to a section cut from 5mm steel: 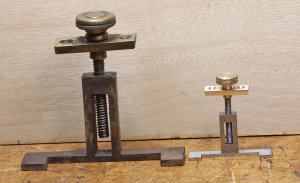 Of course rosewood is now unobtainable, so I used a wood with the colloquial name of 'western rosewood' (Acacia rhodoxylon). It's one of several (quite unrelated) species in Aus. with 'rosewood' in their name, and could pass for a species of Dalbergia if you don't look too closely. It is hard & dense & takes a very high polish like the Dalbergia rosewoods.

Construction of the body was tedious and exacting, but presented no special problems. I did make a mock-up from a more easily-worked wood to make sure I could chop out the mortises for the depth-stop & blade & form the indented rebate for the skate with sufficient accuracy: 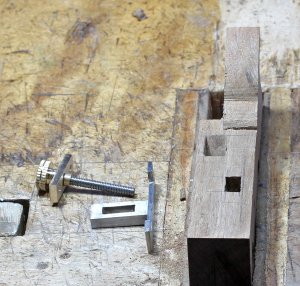 That was pretty straightforwad, so I moved to the real thing, which should have been straightforward too, except that in a moment of mental aberation, I made a saw-cut on the wrong side when cutting the repbate for the skate! I was about to start over, but as I'd already invested quite a bit of work in it, I decided to just fill the saw-cut with a "speed stripe" & tell everyone it was intentional: 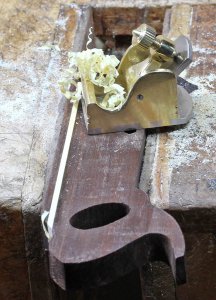 Making the fence was my biggest concern when I started. The original arms are 7/8" diameter, so I should have made the model's 7/16". However, that would have meant making up a new tap & thread-cutting jig so I opted for 1/2", for which I had the appropriate gear. I reasoned the compensation for the "error" would be somewhat stiffer arms that would make the plane more usable.

Making & threading the arms was fairly easy. I decided to add some bling in the spirit of the more expensive Sanduskys & made ivory tips for the arms. The "ivory" is actually so-called "vegetable ivoty" (Tagua nut).. Because of the large voids in the nuts, you can only get small pieces, but I was able to cut pieces just large enough from a large nut. These were tapped, screwed onto a 4mm mandrel, & turned to shape. The mandrel was then cut shorter & glued into the ends of the arms:

Making the body of the fence was a bit easier than I'd anticipated. I sawed off as much waste as possible : 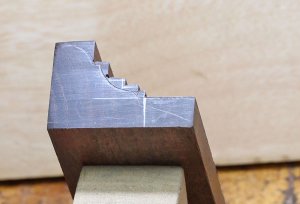 Then finished with planes & a scraper shaped to the profile (notice how some of my other miniatures come in handy for such a job ): 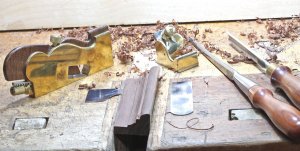 A. rhodoxylon scrapes beautifully being a hard 'oily' wood & the result is pretty close, though I did leave out one fillet, which I decided was too ridiculously small to manage without risk of ruining the whole job: 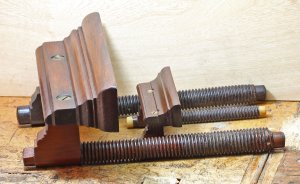 Finally, the nuts: I only had one small piece of genuine boxwood (Buxus) so I used a local species of tree which has very fine-grained, white wood & turns & threads very well. It's a little stark when freshly-minted, rather like lemon wood, but I'm hoping it will mellow in time & look a bit more like boxwood: 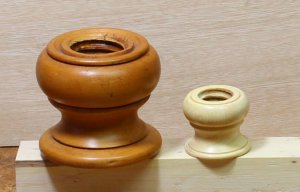 The boxwood nut on the left was made at least 30 years ago & is probably as dark as it's going to get. I might try giving the mini nuts a bit of chemical help sometime (after careful experimentation on scraps!) 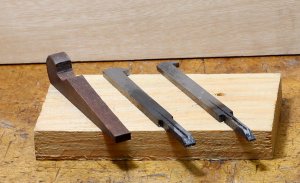 Finally, after a bit of fettling which mostly involved levelling the skate, I took it for a test drive:

It's not the most comfortable plane to hold onto, but works remarkably well & will be quite ok for the small jobs it will be likely to be called on to do.

Here it is beside the original: 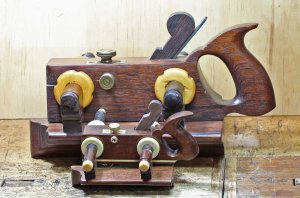 And posing for a final portrait: 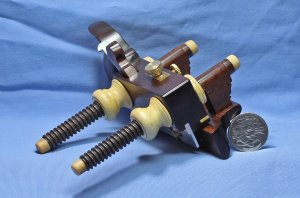 All in all, quite the fun project, apart from the moment of anguish when I realised I'd made that wrong saw-cut. However, my 'fix' does add a bit of bling, which is in the Sandusky spirit, even if not strictly "correct"...

Looks beautifully made Ian, that vegetable/nutcutlet imitation ivory is interesting, trouble is over here people would assume it was the real thing and have you locked up lol. Ian
I

Cabinetman said:
Looks beautifully made Ian, that vegetable/nutcutlet imitation ivory is interesting, trouble is over here people would assume it was the real thing and have you locked up lol. Ian
Click to expand...

Dunno Ian - it does look pretty convincing, it even has the lines of genuine ivory, caused by lines of tiny pores. It's quite a bit softer & easier to turn than the real thing, but it's limitation is the small size of the pieces you can cut out of a nut. Quite ok for models & little stuff, & I reckon there'd be several ways to prove it's vegetable & not animal, so you shouldn't stay locked-up for too long if you try some....