I would be grateful for your thoughts on this cleaver blank I’ve made: 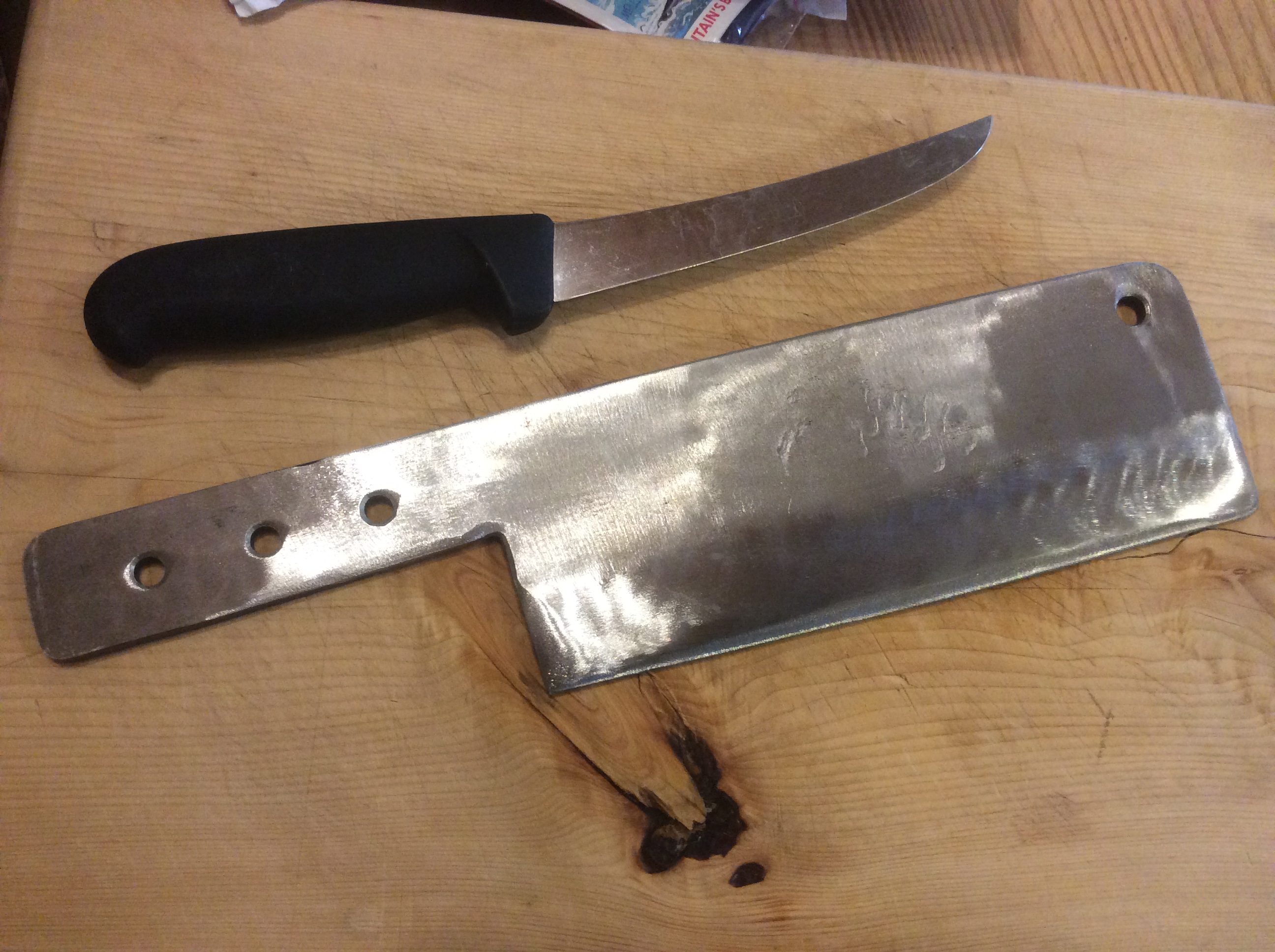 It’s cut from a log harvester chainsaw bar, and has been annealed and roughly shaped. Next to it is my 6” boning knife for a size reference. It weighs just over 1kg, and feels just right to me (I do lots of home butchery). The spine is about 4-5mm thick, so I’ve tapered that down towards the edge.

How would you heat treat it from here? The plan was to harden the whole thing, quenching in oil, then temper in the oven. Would I be better off just edge-hardening? I’m not sure how hard a cleaver edge should be, but presumably not as hard as a normal knife.

To heat treat you need to know the composition of the steel, since you are using unknownium it's impossible to say for certain.

If it were me I would heat it up until it becomes non-magnetic and then quench in oil, do a file test, if a file doesn't bit you have succeeded, then temper in your oven or use your heat treating method to draw it back to a dark straw colour (softer since it's for cutting bone), when tempered a file should just start to bite but not easily.
S

You need to get pretty hot before the quench and it's a big piece. You don't say if you have a forge big enough to take it, but how about coating with clay except for about 1" wide along the edge. If you concentrate heat for an edge quench, that might slow down the heat loss from the rest of the piece and help you get up to temperature.
That's just a thought. I've never done one of these but my one attempt at hardening taught me that you need to get the piece properly hot before you quench.
G

I’m not sure of the exact steel type, but reasonably high-carbon to resist wear from successive chains, and stiff enough not to bend in the cut. Years ago, I made this knife from a chainsaw bar, loosely based on the Malaysian parang: 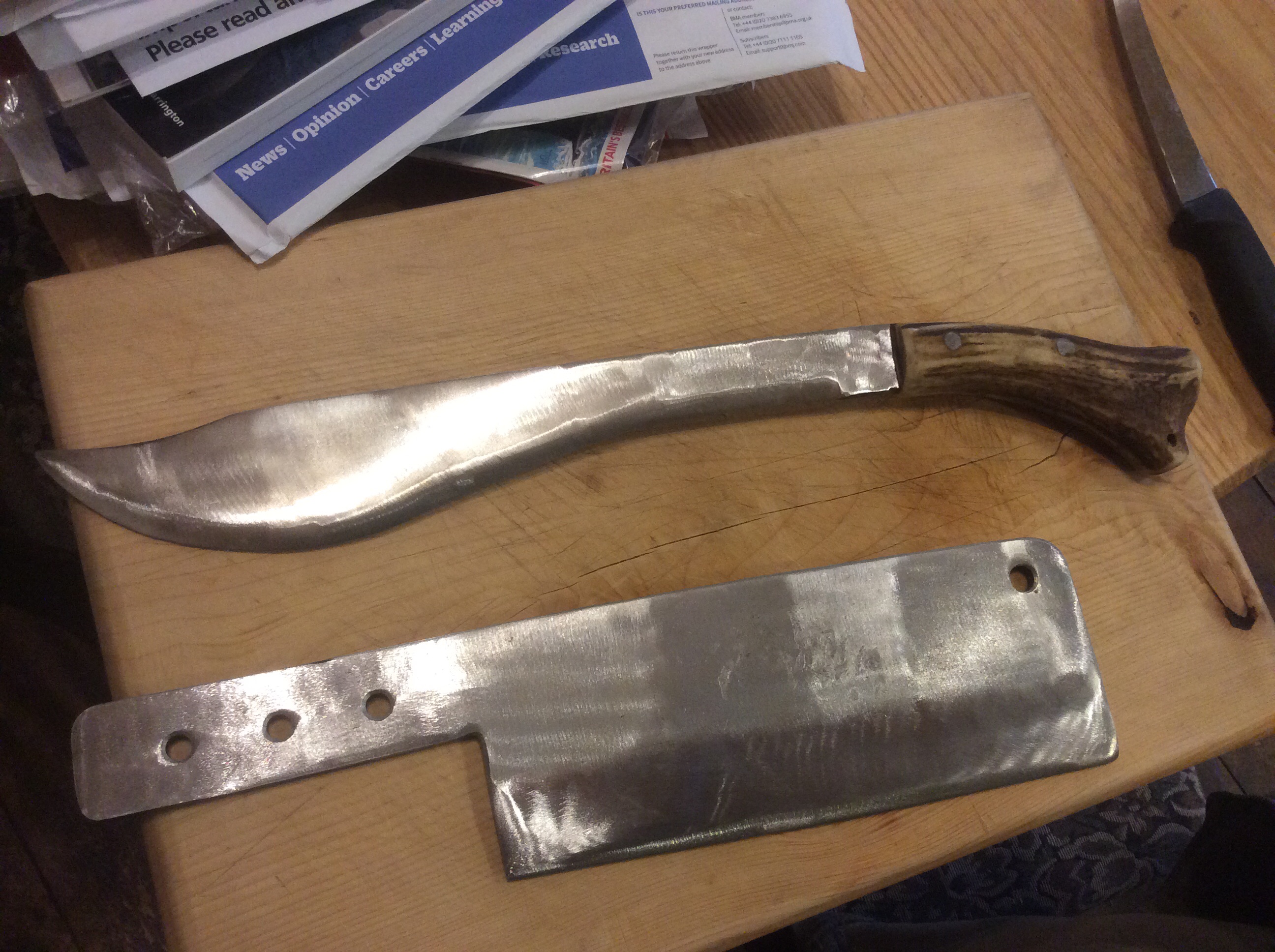 This was oil-quenched to harden (sump oil), then tempered blue in the gas oven. It’s had a lot of use hacking at broom and gorse, and seems to keep an edge and not chip.

I did get the cleaver hot enough to anneal it, as before that the drill bits just squeaked on the surface, and afterwards it was like drilling mild steel - nice big spirals of swarf. I don’t have a forge, just a big propane torch and some bricks.

Both your pieces of advice have been useful, thanks. I guess a cleaver should have a softish spine to absorb shocks, and a hard edge, so the clay idea might help. I’ll attempt to get the edge glass-hard (test with file), then maybe heat it till straw-coloured.

I'd say you want it harder than the parang but softer than a kitchen knife. You want the edge to be nice and sharp but ideally it would dent rather than chip otherwise it won't fulfil it's function very well.
G

The finished product - my 2lb cleaver! 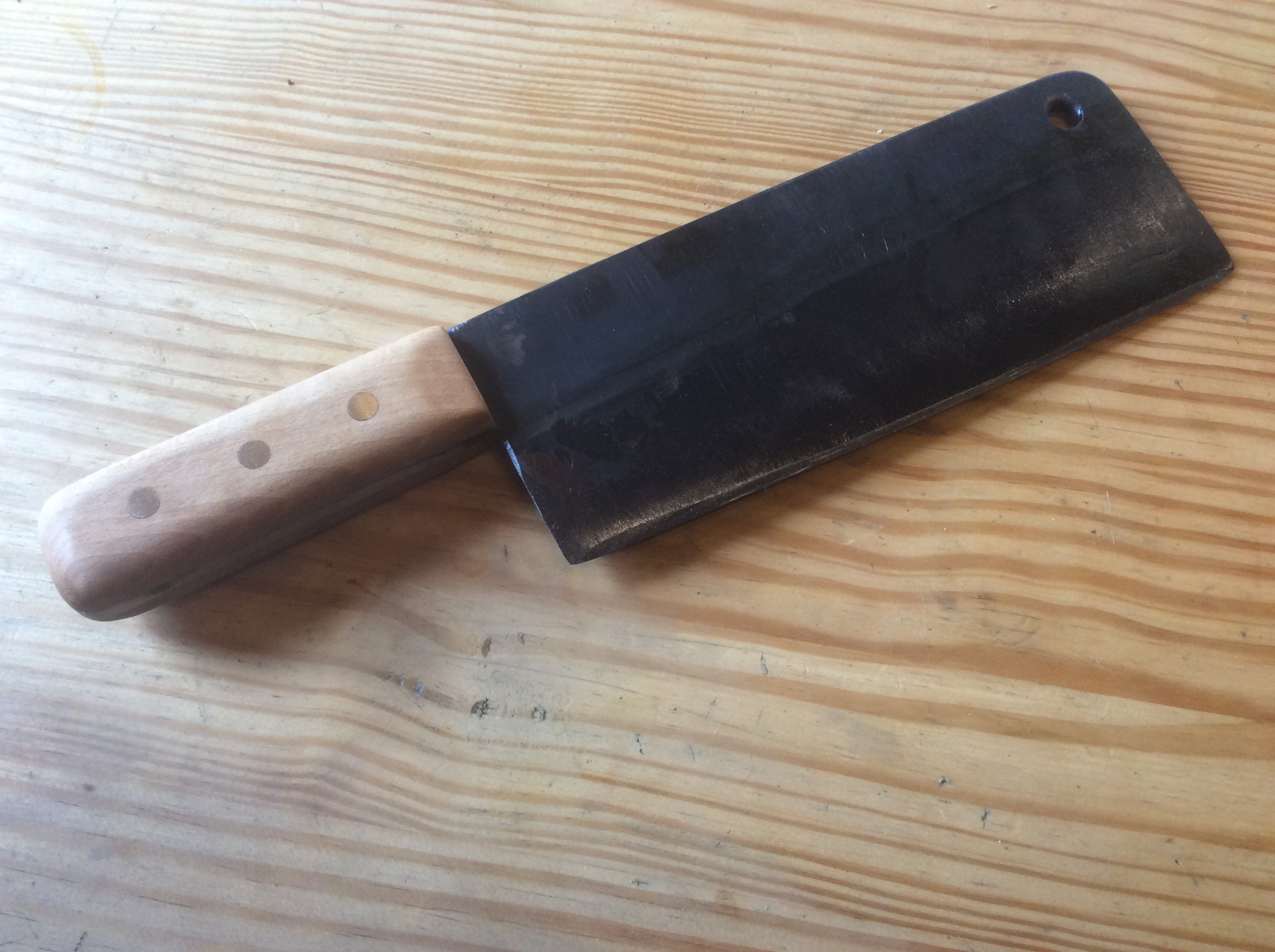 In the end, I heated the edge to non-magnetic, then quenched that only. This left the edge glass-hard, and the back still soft-ish, but still harder than mild steel. Sometimes you hit the back with a hammer to chop through a big bone, so I didn’t want it at all brittle.

Tempered to purple/blue in the oven.

D
Paring Chisels May Break Me
2