Adam W. said:
Out of nearly 500 UJK products listed on their website, 85 are made in Britain and they are all nicknacks and bits and bobs.
Click to expand...

Where did you get that info Adam...? Coz that's certainly not " the vast majority" as they claim on their website....

With a focus on British manufacturing, the vast majority of UJK products
are proudly designed, developed and manufactured here in Axminster, Devon

It's one of the filters on the left hand side of the UJK page.
M

I remember, many decades ago, having to beware of Gaedor spanners after they transferred production to India.

And it may be an urban myth, but I heard once that back in the day when "Made In Japan" meant cheap tat, they named a town there "Sheffield", so they could legitimately label the cutlery etc they made there "Made in Sheffield".

Not an urban myth - my Dad served in the East in WW2, and passed through Hong Kong. In the 20s/30s Ronson had invented and patented the first single-action cigarette lighter. There was a shop in HK selling them - big window display of Ronson Lighters. And right next to them, at considerably higher prices, "Genuine Ronson Lighters".
R

My Bosch table saw is made in Taiwan, my Bosch jig saw I inherited from my Dad is made in Switzerland, must be a least 40 years old.
This is reflected in the build quality.
Every Chinese made machine that I own has needed fettling, we should all know by now that “you only get what you pay for”

Old Chippy said:
Hi all. I don't know if this has been discussed before but there is a company near me that puts Union flags on its machines and labels them as Made in UK.
Click to expand...

I knew someone once who had a senior role in a civil engineering co. At one time he was project manager for (or in) an oil refinery build in Canada.

All the equipment being installed had to be produced in the USA or Canada by unionised companies, and stickered to say so.

The oil company had the equipment made elsewhere, and bought the stickers from the union leaders.
S

Distinterior said:
I've just had a thought......I mentioned Axminster UJK in a previous post......Does anyone know for certain that all their products ARE MADE in the UK...?
Do they state it as a fact or are they as ambiguous as a lot of other manufacturers?

Edit.
I've just had a look on Axminsters site and it states " the vast majority of UJK's products are designed, developed and manufactured in the UK "
Not 100% of them though...
Click to expand...

When I wanted to buy my table saw from Axminster, I had to wait many weeks for Axminister to gewt new stock in. It was that same for a lot of machines in their range at the time. The cause was the ship that blocked the Suez canal in March 2021 together with the pandemic. I even asked them when they expect the next shipment to arrive to which I received an ambiguous reply.

However, when I did get the table saw I was really impressed with it. It was already set up and ready to use from the box and the quality was above expectations. It replaced a Makita saw which, to be honest, was never accurate and wouldn't have been much use on a building site let alone a workshop.
S

thetyreman said:
people want stuff to be made in the UK again, but reality is we don't have infastructure in place, then even if we could go back to manufacturing in the UK again everything would cost a lot more, people are too cheap to pay what it'd cost, so we outsource slavery to third world communist countries then complain about the quality control, it's hilarious in a way.
Click to expand...

It's sad, but in Aus - back in the 1970"s - ( leaving socialist politics aside ) we "killed" local manufacturing.
It's part of the highly prized Free Trade Agreements.
Its the EU on a global scale.
You are correct, people do not want to pay for quality any more. Use it once and chuck it out. AND that's such an expensive way !
I would rather buy less often - buy better quality and NOT support Asian ( and especially Chinese ) rubbish.

These discussions keep coming up.

Everything made in China is rubbish… iPhones.

More examples are available if your strawman can be resuscitated.
T

We - the consumers - tend to vote with our pockets and must take responsibility for driving the actions of our suppliers in trying to source the cheapest.

In manufacturing the UK has a proud history dating back to the industrial revolution. By the late 20th century it was under invested, inefficient, unresponsive to the need for change, and expensive. Other countries were able to produce at a fraction of the cost and to a similar quality.

Containerisation and communications were the final nails in the coffin making overseas sourcing an easy option. I would observe that in "high tech" business (aerospace, precision engineering etc) the UK could still hold its own - but basic metal bashing in the UK had reached the end.

In a globalised economy, products are assembled from components sourced world wide - although the pandemic has exposed supply chain problems. The key determinant of a quality product therefore lies in design and quality control, not manufacturing location.
S

But there are also those who mistakenly believe that you don't need to buy Bosch, Makita, Mafell or such in order to get the same level of quality for a lot less by buying Erbuar and the like. Maybe they just look upon the tool as disposable rather than a lot of us who only think of the blades as disposable.

Overall I agree that people don't want to pay for quality, (read something that may last) because if it is fashionable then they don't expect to keep it that long, such as smart phones where a perfectly working phone is discarded because some advert says there is a better one available.

Rolls Royce cars may be UK made but up until recently the V12 engine was made by BMW in Germany until they re-organised so that plant only handles EV's and so it is now made in the same plant as mini engines in the UK. The transmission is still made in Germany
S

He may have been thinking of RR aero engines rather than cars.
S

I had this conversation a couple of days ago with a good friend of mine, my belief only but the West long term is in one hell of a mess.
Reasons being we in the West can not play the long game, politics does not allow it, elections circa every 4 yrs, policy changes etc etc in complete contrast to the East and Arab nations.
Patents mean nothing, thousands of products are reverse engineered with seemingly no penalties as we the consumer invariably buy on price point, lets not even mention fakes !
In this world of climate change we gladly import from nations that do not abide by the same rules and I can't see that changing any time soon.
We can't have a level playing field unless huge tariffs are added or corporation tax/business breaks are allowed to compete
This is nothing new, has been the same for years but in my humble with the situation in Ukraine and the willingness to not impose sanctions as has the West unilateral action needs to start now..
Rant over, apologies
S

I used to work as a civil engineer in the Middle East. We had to source some manhole covers for a project and it was mandated that they had to be made in the country of use (the UAE in this case). They also had to carry the BSI kite mark to show that they complied with British Standards. The clients material engineer and I duly made our way to a poky, scruffy little casting yard in the middle of an industrial area to inspect the covers being made from melted down engine blocks by underpaid workers wearing flip flops.
When asked about the kite mark, the boss of the company asked me to give him a picture of a kite mark so he could alter their moulds to incorporate it.

skeetstar said:
He may have been thinking of RR aero engines rather than cars.
Click to expand...

The spring clamps don't have any location information and could come from China. I didn't pay attention to the paper tag that was attached to them. The packaging for the unopened KPX20 and KP are marked "Made in China" and "Made in PRC", respectively. 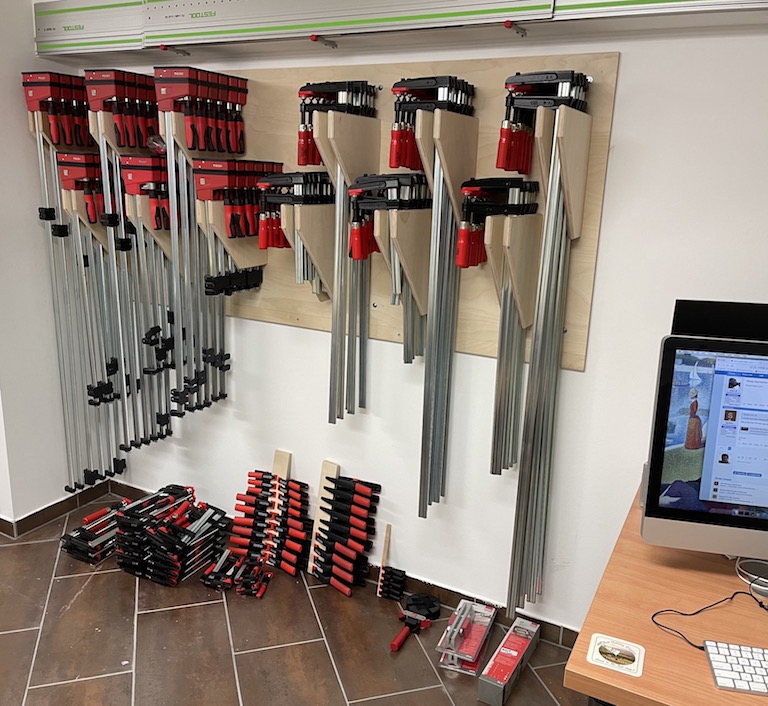 The H series 3/4" ones I have, have Made in China in tiny print ™ on the package, as do the spring clamps.

The spring clamps don't have any location information and could come from China. I didn't pay attention to the paper tag that was attached to them. The packaging for the unopened KPX20 and KP are marked "Made in China" and "Made in PRC", respectively.

WOT no dust , I did notice message to self on screen "must make something "

@MikeK You were really just panic checking that you hadn't been duped into buying a shed load of Chinese made tut like me, weren't you ?

Thingybob said:
WOT no dust , I did notice message to self on screen "must make something "

The last task for every shop session is to clean up and store any loose tools. It's a lifelong habit, but I start the next session with a clean and organized shop. The clamps on the floor were recently purchased when my Festool distributor closed and gave me a good price.


Adam W. said:
@MikeK You were really just panic checking that you hadn't been duped into buying a shed load of Chinese made tut like me, weren't you ?
Click to expand...

Not panic checking, just curious about the smaller clamps. If they perform as expected and don't break after the first use, I really don't care where they are made.