Finished building my first work bench last year (around October ish) and was well pleased with the result. However, I have now got a problem with the previously "tight as a gnat's chuff" planing stop dropping out of its mortise on it's own. Clearly it's down to recent timber movement due to the warmer weather but I was wondering if anyone has a solution to this, short of re making the stop?

The bench is a traditional english style (based of Richard Maguires design) softwood top and base with an oak planing stop (two bits laminated together). The stop is tight at first and has to be hammered in right until the last half inch or so but it doesn't matter which way up I have it, it drops through after that.

If I do have to remake the stop is it best to make it during peak summer time heat or will it then be too tight in the winter? (struggling to get my head arround timber movement as you can see!)

Pics for info (apologies if they don't appear, never done this before):- 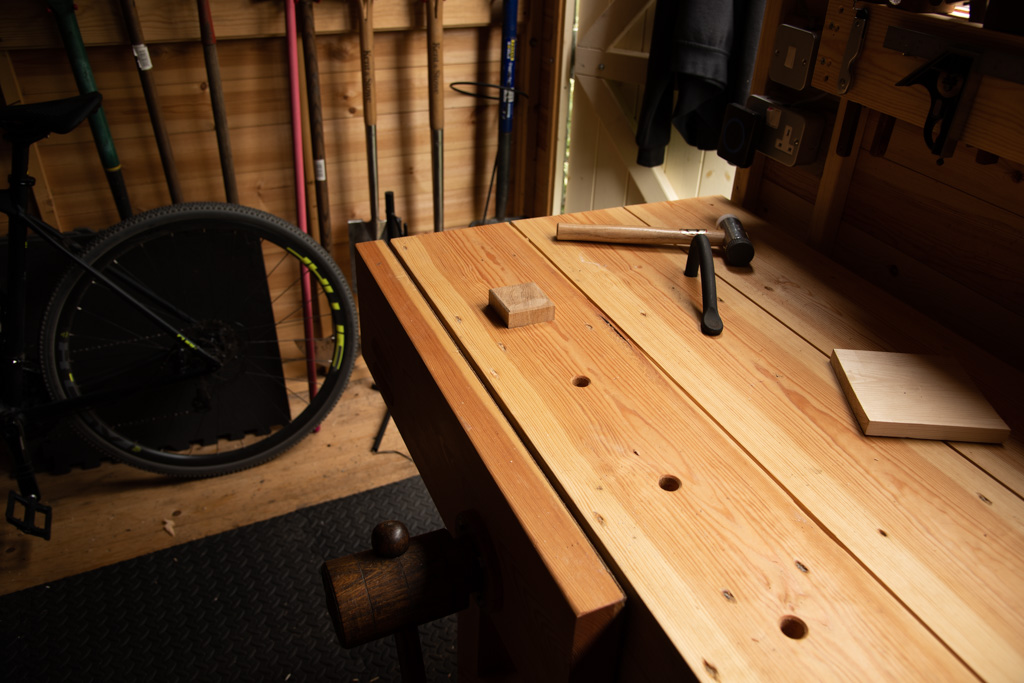 What about putting a piece of spring steel on the frame, pressing against the planing stop?
Tom
M

Thanks for your reply Tom. Could be a goer but not sure how to secure it?

Cut a couple of slots in the wood and bend the ends of the steel into tabs or something? Would an old card scraper do or are they too thick?

I was thinking just a bracket screwed onto the frame with some sort of leaf spring idea attached somehow.

Hi, I recently finished a bench and I used ball catches under mine.It works fine. I also made the planing stop extra long so I can just lift it up with my foot without bending down. :wink:

Ready to be glued and screwed. 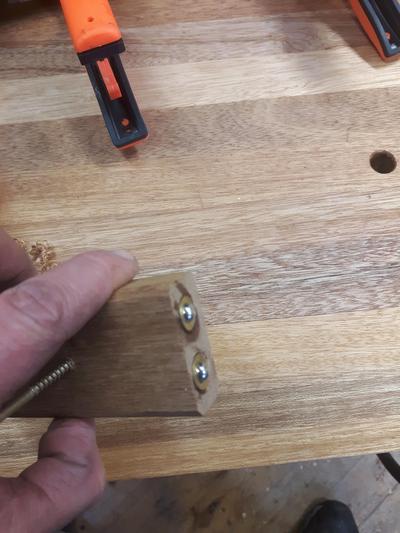 Screws removed, dowels drilled and banged in with glue. 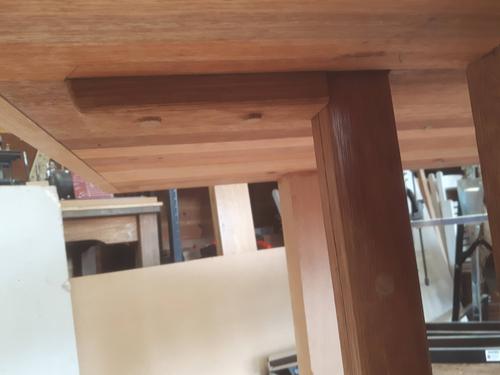 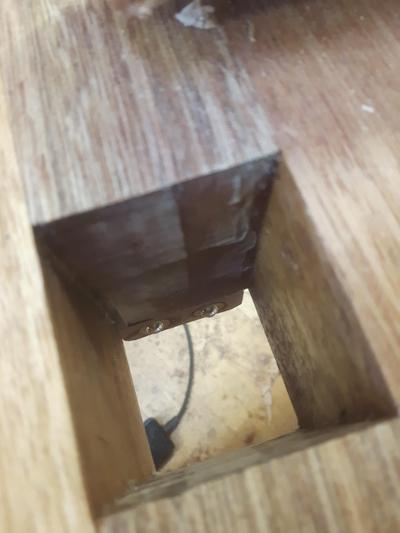 If either fails I should be able to prise it out and replace.
Cheers
Chris
M

Oooh, never thought of ball catches! They might work and could be a simple fix, recessed into the frame perhaps or even the stop itself. How are they fitted? Looks like you glued them in?

Great solution there from Bm101. The ball catches obviously provide a good long-term fix, but it occurs to me that the batten alone would provide all the friction needed for your stop not to fall through, for now at least and possibly nearly permanently given the wear rate of end grain in a nice hard species.

Check out Paul Sellers' You Tube site. He does a simple spring attached to the stop. From memory it's a round stop but easily suited for a square one.

Cheers ED65, am proud of it when it works! You might have a point actually. I could install a batten with slot fixings for further adjustment for now. Definitely fancy the ball catches though. Need to get something sorted as my lazy sub conscious is using it as an excuse not to start my next project!

Thanks John15, I will check it out. Haven't been on his site for ages.

maranoblet":1nw1u5d8 said:
Oooh, never thought of ball catches! They might work and could be a simple fix, recessed into the frame perhaps or even the stop itself. How are they fitted? Looks like you glued them in?

Hi John,
I epoxied those in.
Hadn't really thought too much about it until now but a better method might be to not to glue and dowel the bottom piece on. A recess and screw might be better. Probably stronger but also a lot easier to replace the whole piece if a ball catch fails.
I suppose in theory if you go for the extra long planing stop (patented now I'm afraid :wink: ) not only can you lift it up with a foot which is actually far better in practice than it sounds . It's fast and easy. Perfect. Then you just push it level when done. You could I suppose not glue them at all if you accurately depth stopped the holes, they would work fine without glue as long as the stop stays in place.
There's a link to my bench build here neverending-bench-build-surprises-hobby-woodworker-by-ending-t116593.html?hilit=bench%20surprises&start=15 Not for any reason other than more pics.
There's another link with terrible photos that you might possibly find handy being 'mid' build. Maybe not. magnetic-bench-aid-possibly-t116200.html
Lovely looking bench by the way. =D>
Cheers
Chris
M

Thanks Chris, I will definitely check your link out, i'm intrigued by the foot action! Always like reading a bench build.
M

Thats a beautiful looking bench you built there matey. Well impressed! I should see if I've got enough pics lying around to do a half baked WIP of my own. warts and all.
S

I've an old school double sided bench with planing stops similar to that. Mine has a long slot in the planing stop with a bolt and wing nut to secure. Bolt goes through the bench frame through the stop and is secured in position with the wing nut. Works well.
M

For anyone who is interested. I tried the ball catch option but it didn't provide enough tension so opted for a steel spring arrangement. 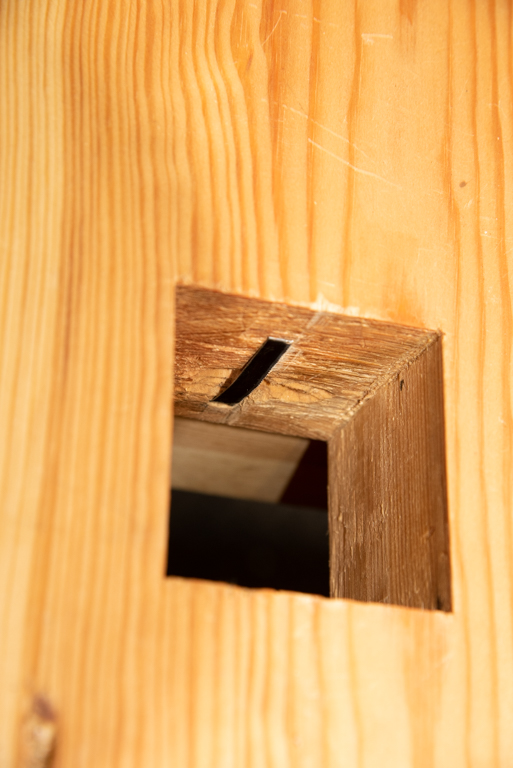 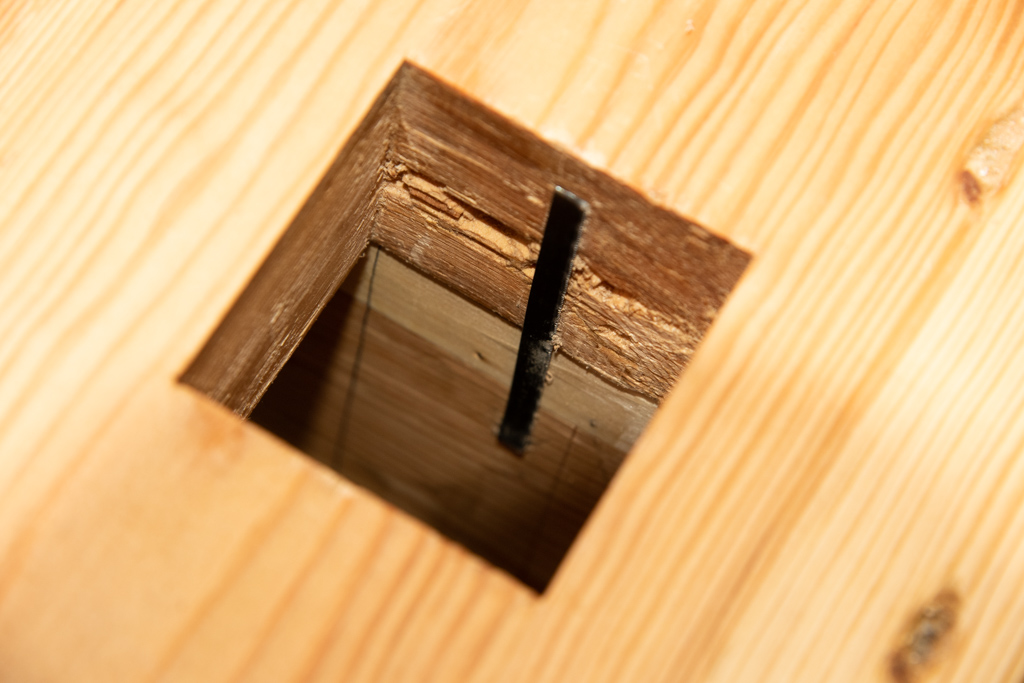 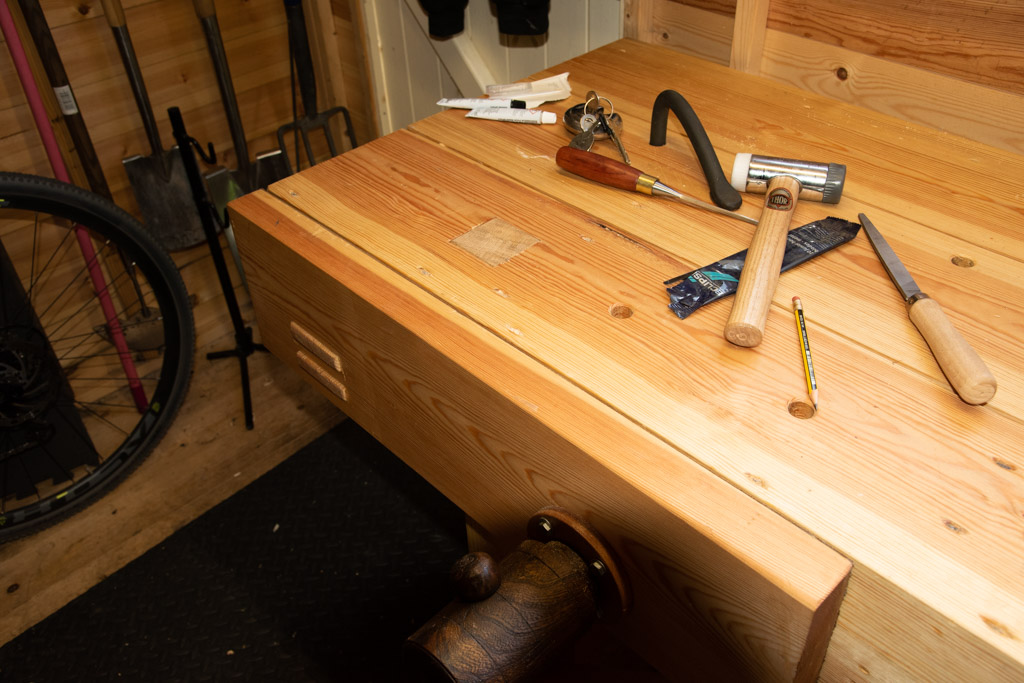 Excuse the gashed sides of my mortise hole (first woodworking project after all!)

I think the stop is tappered off at both ends from bad planing which is why it wouldn't grip as it got near to flush with the top.

Excellent result. Thanks for updating John.
Good to have you on the forum.
If you can; do the half baked WIP.
Everyone loves a benchbuild.
Warts and all is even better.
More photos the better.
Cheers
Chris

Whilst cleaning up just now, I came across some couch springs and was thinking of posting them
I forgot about them completely.
One of these screwed onto the truss grasping the stop.

This is how I did mine. I also have round wood bench dogs that use a wire spring but after some use I find they can get a bit loose.
Regards
John

I make no calls for originality as this was on a bench I was given.

The bench stop is alongside a leg. On the leg is a round wooden disk mounted off centre. The off centre disk supports the stop at any height in its off centre range by turning it. 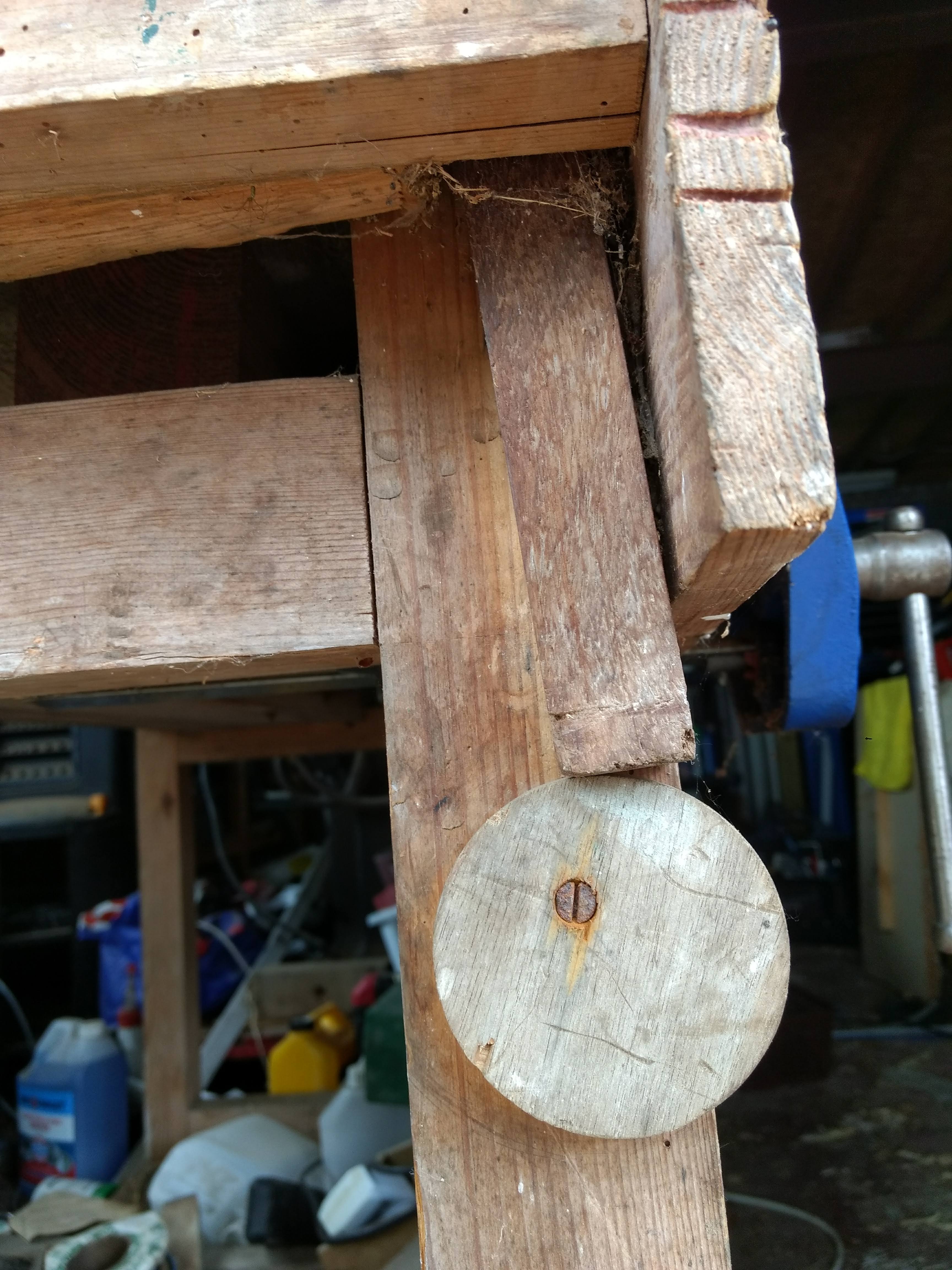