Looking at changing fluorescents to Led's......

I have no idea what to look for...confused by "starters - lumins - daylight - cool - battens " etc.
...any advice ( not too technical ) would be most welcome!

The easiest and cheapest way is to replace the tubes in your existing fittings with led tubes. Then the fun starts. Colour temp is the first choice, warm white through to daylight, about 6000K (very cold looking light) which may be better for a workshop as it gives better colour rendition. The next is the CRI which needs to be about 90 (I think, there is a 9 in it) this is an indication of the colour quality of the light. As the LED tube does not need a starting voltage the starter is not required and you usually get a false starter with the tube. If you have a fitting without a starter you would have to read the instructions. The lumens are the brightness as the use of watts with LEDs as an indication of brightness does not work. I do not think there are any LED replacement tubes that are less bright than the old fluorescent tube they replace.

Apart from replacement tubes there is a whole world of LED lights you can expelore and get confused with.

My recommendation is to go with the better quality LEDs that have had proper testing and the results are available. TLC do some good ones. Other have not had a problem with cheap Chinese imports but I hav

I replaced the one in the garage where I work with an LED panel, which I can highly recommend, it's much better light and more diffuse, more comfortable on the eyes as well.

If you are getting tubes that replace the fluorescent bulbs then you won't get much of an energy saving because you are going through the ballasts. If you get replacement bulbs that don't need the ballasts you'll have to take the fixture apart to remove the ballast and rewire the tombstones. Here, doing that in some areas of the country invalidates the fixture certification which can void the insurance if there was a fire. You also have to know what you are doing with all that electrical sparky type stuff.

When we built the house and shop in 2016 I ordered T5 equivalent fixtures through Alibaba direct from China. I bought 22 fixtures, 4000 lumen (40 watt), 6000º Kelvin. I like the bright noon day light they throw. Delivered to my door cost the equivalent of about 21 pounds each including shipping, brokerage, exchange and tax. Took about two weeks to arrive. I have had no trouble with any of them. If you have further interest in that going route let me know by PM and I'll send you the link to the new I bought.

I do not think there are any LED replacement tubes that are less bright than the old fluorescent tube they replace.
Click to expand...

I think it's the other way round - LED's are not as bright as the equivalent fluorescents and by a considerable factor. I looked into this a few months ago, and concluded I would have to double the number of tubes. I was looking to improve my lighting and change to LED's. I've just done a couple of comparisons to confirm my earlier conclusion and, sure enough, LED brightness is probably 60 - 70% as compared with the old tubes.
However this may not be the whole story. Fluorescents radiate light in all directions unless they are fitted in reflective housings whereas all LED light is directed downwards making them more efficient.
In my workshop the fluorescents are unhoused and what's more covered in dust. So there may well be a good case for replacement. It would be nice to get hold of one just to try it out.
T

As tubes blow in my workshop I'm replacing them with screwfix LAP double battens of the same length. Feels brighter as the old ones were only a single tube fitting. Its really noticeable how long flourescents take to warm up when there's an LED next to them!

I forgot to say that in my research on how much light one should have I came to the conclusion that I needed about 1,000 lumens per square meter. So I have 16 fixtures in my shop. You may be younger and not want it so bright or feel you only want it that bright over the bench and table saw letting the rest of the shop be lit just enough so you don't have to feel your way around. I wanted it bright no matter what part of the shop I was in. Besides I move stuff around and didn't want to move lights around too. #-o

My goodness that is a high figure. None of my references suggest a figure above 600. I'm not saying that you're doing anything wrong, just that anyone else calculating their light requirements might want to start with a more typical figure.
F

i have used these

I would suggest buy one to try before you go all in and buy too many.

My landlord was looking at changing the 8ft fluorescent tubes in my workshop as replacements are getting expensive. He swapped a couple of fittings for Led panels but I could not stand the light they gave off, was way too bright and white for me. He ended up putting them in his workshop and I am using up his old fluorescent tubes.

If you get the right brightness/colour they are probably fine but these were just awful.
L

My goodness that is a high figure. None of my references suggest a figure above 600. I'm not saying that you're doing anything wrong, just that anyone else calculating their light requirements might want to start with a more typical figure.
Click to expand...

No sweat Mike. Like most things in our shops there is a lot of variation. Here is how I got there.

At the time I found an article written (in the days before LED's) about shop lighting from one of the woodworking mags (can't find in now of course) that said 100 foot candles per square foot was needed. That equates to 100 lumens per square foot so my 634 square foot shop (measured inside) would need 63,400 lumens. When I found the lights I wanted, they were 4,000 lumens, I ordered 16 for the shop. That theoretically gives me the roughly 1000 lumens per square meter. The walls and ceiling are OSB, so absorb a little of the light but I will paint them white someday. As they are on two circuits I can just turn on one if it is too bright for someone, like my wife. :roll:

This light selection article for workshops after conversion shows a starting point of 700 lumens , closer to your number, on up to 1,000 lumens, closer to what I did.
https://www.instructables.com/id/Worksh ... -Tutorial/

I'll admit to having a much brighter workshop than most people do but I have always hated working in the dark. (hammer)

I bought one of these. I liked it so much I bought another. I had one suspended above the mitre saw and another above the router and that worked well enough till I started reorganising the layout (again!)

I came up with the idea of mounting them side by side in a sturdy frame, drilled holes in the frame and inserted lengths of steel tube then threaded some steel cable through the tubes to suspend the lights from the ceiling. Now I can pull them the length of my workshop to light up whichever part I'm working in. It's the first (only) thing I've made that visitors to my dust making room look at and say "That's clever!" (without being sarcastic!) 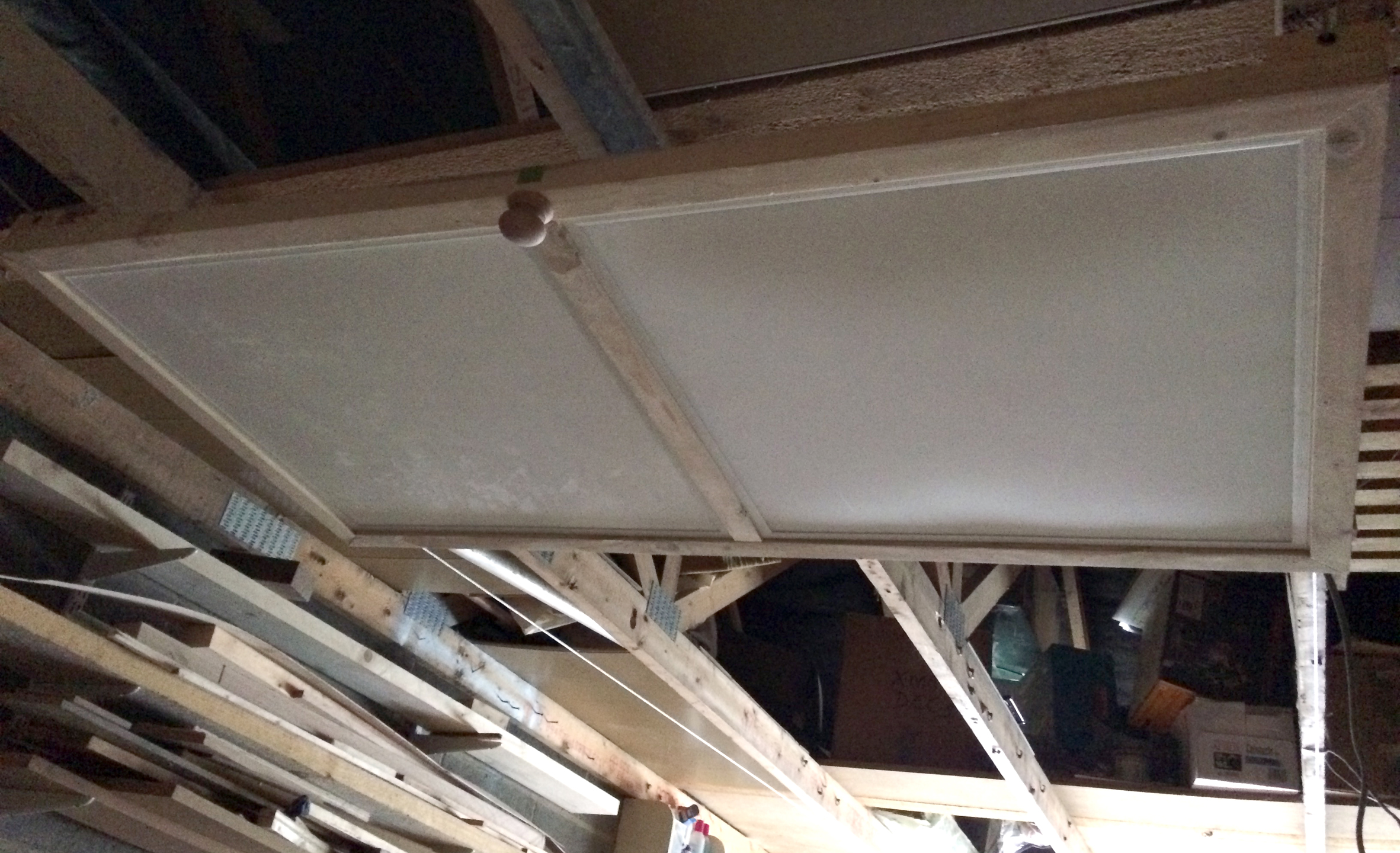 NB: Although both lights came from he same supplier and look identical they're not. one being slightly thicker than the other.

So did I. Now I have 5 panels, and only 1 working properly whilst the supplier (not the same one as yours) tries to sort out what on earth is wrong. Cheap Chinese C... is my conclusion. The light they give off when they're working is fantastic, but the dead ones are piling up in the corner of my workshop and the process of having them replaced isn't amusing me any more.

Inspector":2vgeshkk said:
.....This light selection article for workshops after conversion shows a starting point of 700 lumens , closer to your number, on up to 1,000 lumens, closer to what I did.
https://www.instructables.com/id/Worksh ... -Tutorial/

Excellent Pete, thanks very much for those links. I'll adjust my advice accordingly.

My workshop is well served with several standard fluorescents of differing sizes on 2 circuits and as I have spare tubes I won't be changing anytime soon as much as I would like to.
What I have done is bought half a dozen 8w LED security lights and mounted 4 these so far on or around my 2 lathes, bandsaw, pillar drill and over workbench so can be switched on and angled as required, next will be one over my saw table. It's like Blackpool illuminations in there when they're on! :lol:

The lights were only around a fiver each so throw away items when they give up the ghost.

One tool in most everyones arsenal is the free light meter apps for cell phones. See what the light is on a bench, machine, kitchen countertop, desk or any area you think is good to work under. Just for grins you can take outdoor readings at different times of the day and for overcast/sunny days. With that information it is easy enough to figure out how many fixtures you might want to put up.

Awe bo**ocks Pete I'll have to have that now, as if there aren't enough apps on my 'phone already. #-o