I currently have 6 fluorescent lights (five foot each) in my garage.
If I’m updating these- do I need the same in LED or can I get away with less?

Lastly, can anyone recommend some good LED lights?

I got myself 60cm square led panels from ebay at about £18 (postage included) a piece. I bought one, fitted it, realized itbwas just a bit too dark. Bought a second one and installed it. Now I feel I have the right amount.

I recommend getting two or three at first, try out different positions, then buy more if you think you need it.
L

I just finished my new garage with LED panels. First when some one adviced them to me I was a little skepticle. But now when they hang I love it. I chose for 4000K mainly for the soft color for the eyes. I'm set on them and not expensive at all.

Edit:
My tip would be, more lights is better. I called a lighting guy wich gave my an direction wich lights would work and the amount. I put 60% or so more in it and love it!

DBT85s Workshop - Moved in and now time to fit it out

stop showing off that all your sockets are level................ looking like it needs a nice layer of sawdust soon

Here is the lighting levels you want for given tasks. Illuminance - Recommended Light Level A workshop is about 1,000 lumens per square metre at the work surface. Your shop being 21 square meters would need at least 5 of 4,000 lumen fixtures, preferably more, so say 6. If the ceilings are high you will want to have more to make up for the distance. They should be spaced evenly about the room if you can and painting the room white will reflect the light around better than dark walls. When I bough my fixtures I bought 5' batons directly from China and saved over local because of the quantity, (22of). 16 for the shop and 6 for the garage. They were 4,000 lumen, 6,000K fixtures and the electricians said the installation was straight forward.

I had daylight fluorescent tubes, which emit less light than standard tubes, and replaced tham like for like with strip LED fittings which have turned out to be a bit brighter and fine for me. With regard to colour temperature I have to say I am a big fan of daylight and opted for 5000k fittings which is a bit warmer than daylight but a lot closer than 4000k. I have found that something close to daylight is a big help when assessing and matching colour and have not found it at all tiring.

I would think more to get extremely good light where you need it rather than worry about overall lighting. It's not expensive to do.

Hsmith192 said:
I currently have 6 fluorescent lights (five foot each) in my garage.
If I’m updating these- do I need the same in LED or can I get away with less?

Lastly, can anyone recommend some good LED lights?
Click to expand...

Most 5ft fluorescents lights emit about 2800 lumens of light. You will need LEDs of about 30w to match that. Check the spec of what you a thinking of buying for its output in lumens. 30w is about 3000 lumens.

Given the layout of your workshop and its area of 21m2, I'd estimate your 6 fls are emitting 17,000 lumens of light, but given 4 are against walls you are probably only getting about 70% of that light ie about 12000 lumens of light, maybe a bit less. This will give you an average illuminance at your bench of about 550 lux which is about right of a workshop, however as LED lighting is relatively cheap and long lasting and cheap to run, I'd recommend you up the illuminance by 10% or 20% overall. It will be higher under the lights against the wall, maybe as high as 1000lux under those fls.

For even lighting of your workshop, your current layout is a bit inefficient in terms of light output so a rearrangement may achieve a brighter effect. I presume you have sighted luminaires against the wall to give added light in those areas? If that is not the reason, then I'd recommended a change to your layout by moving the lights that are against the wall into a more central position, if you space all the luminaires out evenly across the ceiling ie 2 rows of 3 you will achieve a better overall illuminance a 20 to 30% gain in overall illuminance at the bench. However you may want bright areas for certain tasks and local LEDs work very effectively at these locations as all the light is emitted down from the luminaire. So this is a matter of choice.

The technical terms are a bit confusing with lighting.
The light output from a luminaire is the luminous flux and is measured in Lumens. Roughly speaking you want to match the new for the old to achieve a similar overall light output. The light that is effective at the bench is the Illuminance measured in Lux and its just the luminous flux divided by the area. most background light in offices is about 300 lux and task lighting is nearer 500 lux. A desk lamp give about 750 lux ie bright over a small area.

As others have said check the colour temperature of your existing lights and if you like it match them up. I like a temperature of 4000k to 5000k i find below 4000k a bit to yellow and above 5000k a bit blue.

One last thing to consider is glare, if you find that your existing set up has a bit too much glare - which is caused by having a few very bright sources of light. Then you may want to get more luminaires that are a bit lower in brightness. That is go for 8 luminaires that are 2500 lumens rather than 6 at 3000. It will cost you a bit more to buy and install but the effect is nicer and less strain on the eye. If this is a major concern ie you get tired or headaches then you could lower the glare further with more dinner luminaires, they come in a range of brightness's these days.

Inspector said:
Here is the lighting levels you want for given tasks. Illuminance - Recommended Light Level A workshop is about 1,000 lumens per square metre at the work surface. Your shop being 21 square meters would need at least 5 of 4,000 lumen fixtures, preferably more, so say 6. If the ceilings are high you will want to have more to make up for the distance. They should be spaced evenly about the room if you can and painting the room white will reflect the light around better than dark walls. When I bough my fixtures I bought 5' batons directly from China and saved over local because of the quantity, (22of). 16 for the shop and 6 for the garage. They were 4,000 lumen, 6,000K fixtures and the electricians said the installation was straight forward.

Hi
I've just seen Petes post. Agree with all his analysis. 1000 lux (lumens per m2) is a bit brighter than I use, but as LEDs are cheap its not a bad thing, you may want to set the switch so that you can turn some off to lower the level at times as 1000 lux is bright!
One thing I'd bear in mind with 4000 lumen fixtures is glare. I you have a tall room that will be ok, but if your garage roof joists are quite low then I'd go for lower power/brightness fixtures ie 2500 or 3000 lumens but have more of them.
J

+1 for 600mm sq LED panels. I put six in my white walled single garage and that is bright. I also have them in my workshop one over the bandsaw and one over the planer/thicknesser. I still use protected fluorescent tubes on the ceiling edges where tables are against the wall to prevent working in my own shadow.
O

I went for 3 of these in an 18' square workshop without windows, there is a large beam in the ceiling so needed one either side of that, then added two more one each side of the shop switched separately to get rid of shadows when I need to, I don't use the side lights often but am glad of them when I do. All five on is way to much light but being able to change it's direction was worth it. 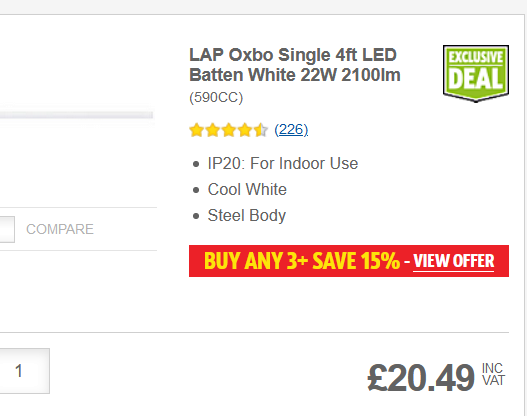 I bought some LED strips in Costco a few years ago and they are, imho, very good. Suspend from roof, hanging chain to switch on, long lead, fixed plug and very bright for craft and workshop type things. I saw them and bought them without looking into the colour, less white may be usefull but I still like them. They may be cheaper if you go get them?

The Feit 4ft (1.2m) Slim LED Shop Light requires no lamps to replace and lasts up to 50,000 hours or 46 years (based on normal household use of 3 hours per day). The PIR motion detection allows for intuitive use, turning on when motion is detected and off when there is no activity. Alternatively...

Thank you so much everyone. I’m going to stick with tube/Batton lights and try and hit the right LUX levels.

Excellent and comprehensive article. Thanks for info. Very relevant, as I’m having new lights in my rented Workshop.
As I’ve got older decent lighting is an absolute must...and heating in the winter!
J

My 20’ x 33’ x13’H shop had 11 fixtures 8’ long with 2 high output T12 tubes in each. 22 tubes at 95 watts each. Over 2 kw of power. The tubes were old so not at their peak output but lighting was adequate. I had replaced 2 ballasts at $50 a pop and had 2 more failing. When I had the rolling scaffolding up to install the dust collector ducting I figured it was a good time to change the lights as well. I had a lighting designer from a local electrical supplier come and do a design. I ended up with 9 strip fixtures 8’ long in 3 rows of 3. These units are selectable between 6k, 8k or 10k lumens and 3200, 4100 or 5000 kelvin. I set them for 10k lumens and 5k kelvin. It’s like daylight in there now and almost twice as bright. I was so impress I went back and bought 5 of the 4’ fixtures for the storage shed and laundry room.
J

Have a look at this older thread too, lots of good info here too. I went for 4 LED battens @500-550lux with an anglepoise at the bench

Hi Don't buy cheap, buy recomended because buying twice is more expensive. Cheap units can have a flicker and not produce a good spread of lumens. Personaly I have used LED bulb arrays for overall lighting and use local lighting with mag bases or clamps to light up the task in hand, this...