Is this a Mathieson plane ?

I recently bought a job lot of planes which included one metal "half infill" and four wooden planes. All the wooden planes bar one were by Mathieson. The metal plane is jack size, has no makers mark on it but the blade is unusual and is stamped with the Mathieson mark. I would like to know if this is actually a Mathieson plane. Did they make hybrids such as this one ? As you can see from the pics, it has a bailey type frog and blade adjustment but has an overstuffed wood (I think mahogany) front bun. The bun is held by four screws, only two of which I've been able to get out (they were obviously a later addition) while the toat is held in place with rivets. The frog is a very heavy bit of kit with the yoke in cast brass. The securing screws are dome headed and, regrettably, pass through the sole. The screw holes do not line up at 90 degrees to the body - they're off by a fraction. While it is tempting to think that this is a panel plane which has been "modified" by someone, there is no indication that a brass/gunmetal lever cap has ever been fitted. Given the design of the frog, it seems that the lever cap would have been the Stanley type (it's missing, unfortunately). Also the toat has been installed by someone (professional or otherwise) who definitely knew what he was doing. The parallel blade is 5mm thick (3/16") and seems hardly used. It is unusual in having only a small slot to fit onto the frog so it's definitely intended for this plane. There is no mark anywhere on the plane - not even a users stamp. The guy I bought it from is located in Prestonpans (Scotland) which, in company with the wooden planes, inclines me to the belief that this may be a Mathieson. Whether it is or not, it will make a nice addition to my toolchest once I've located a suitable lever cap. 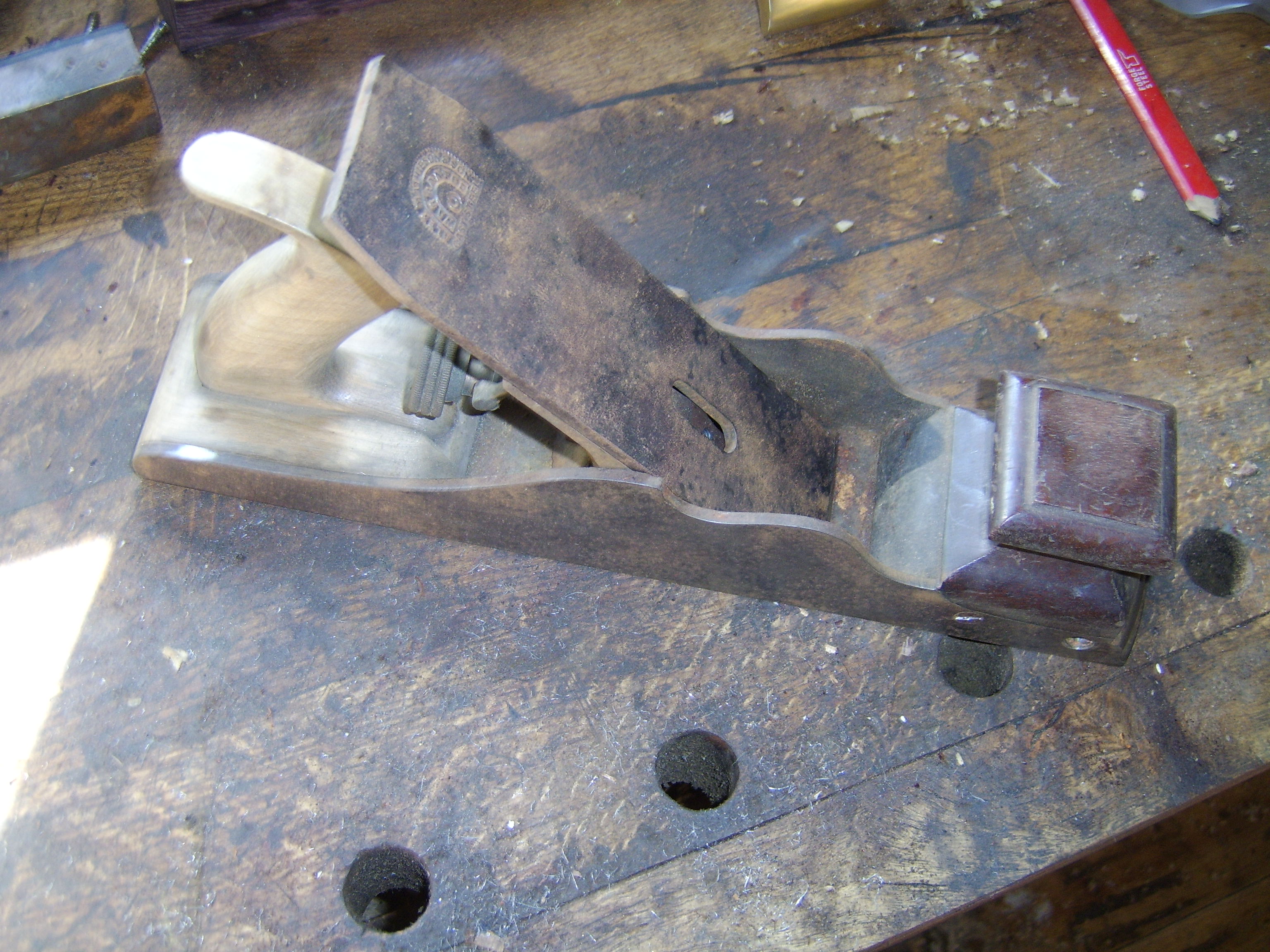 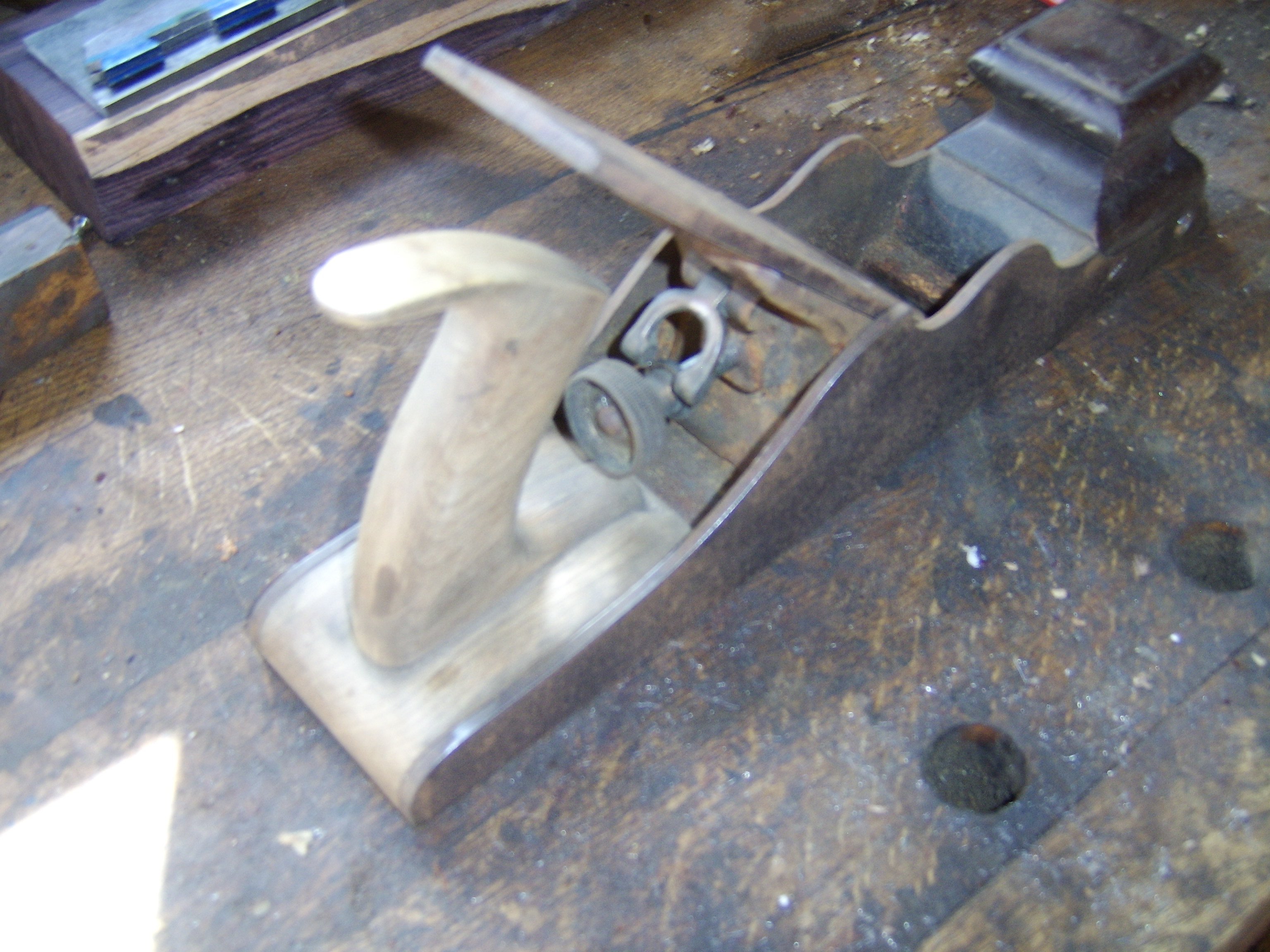 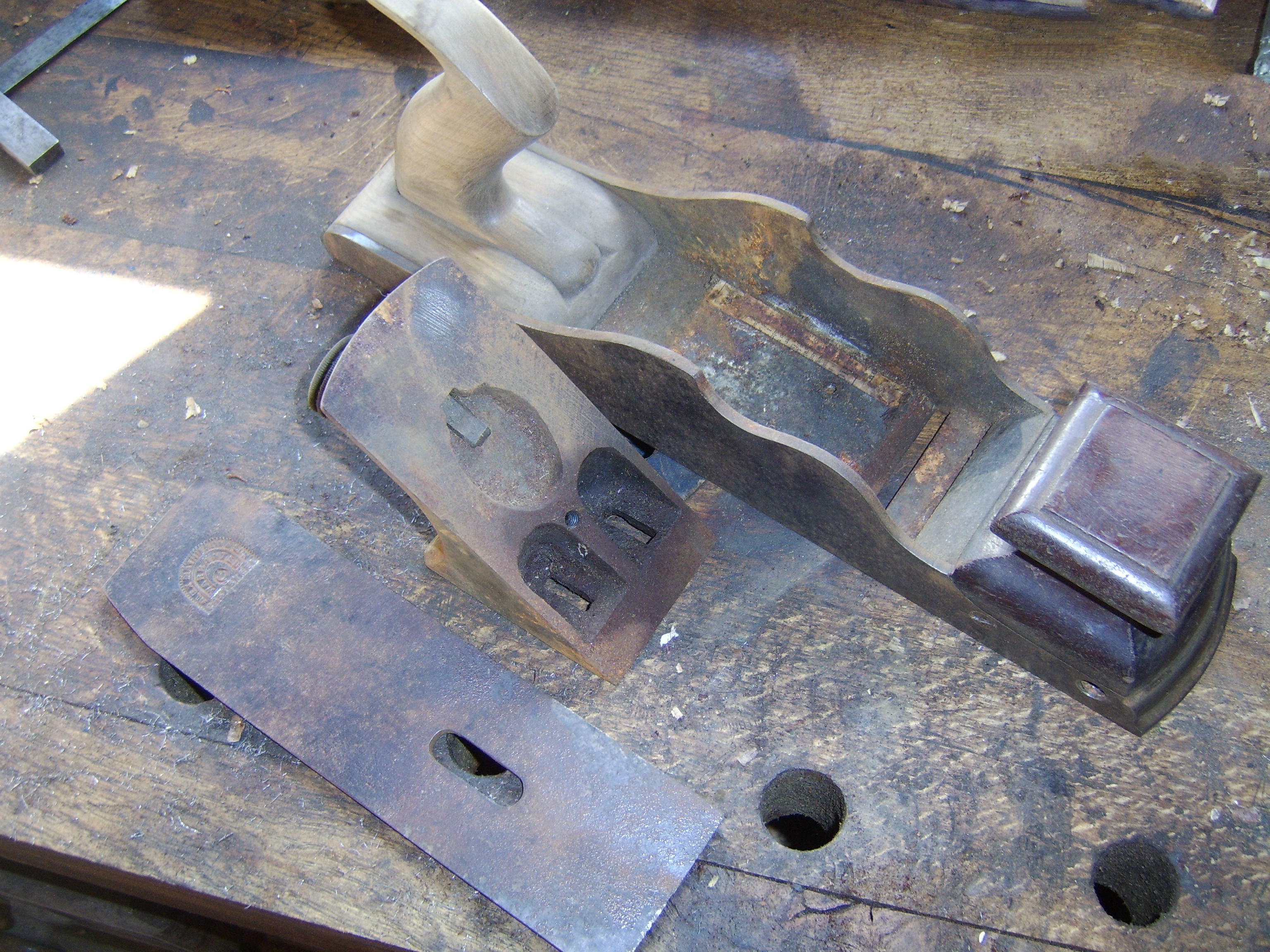 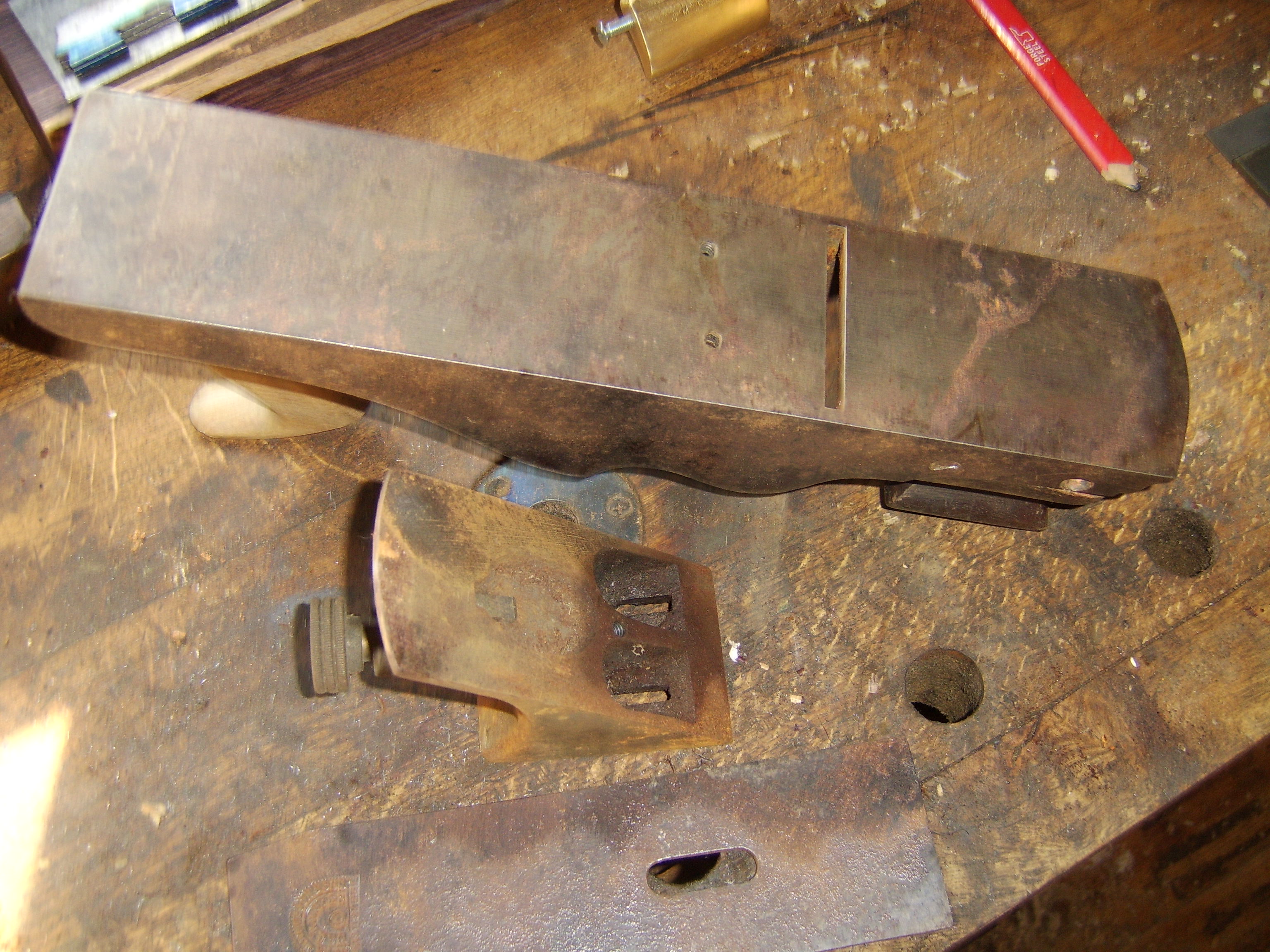 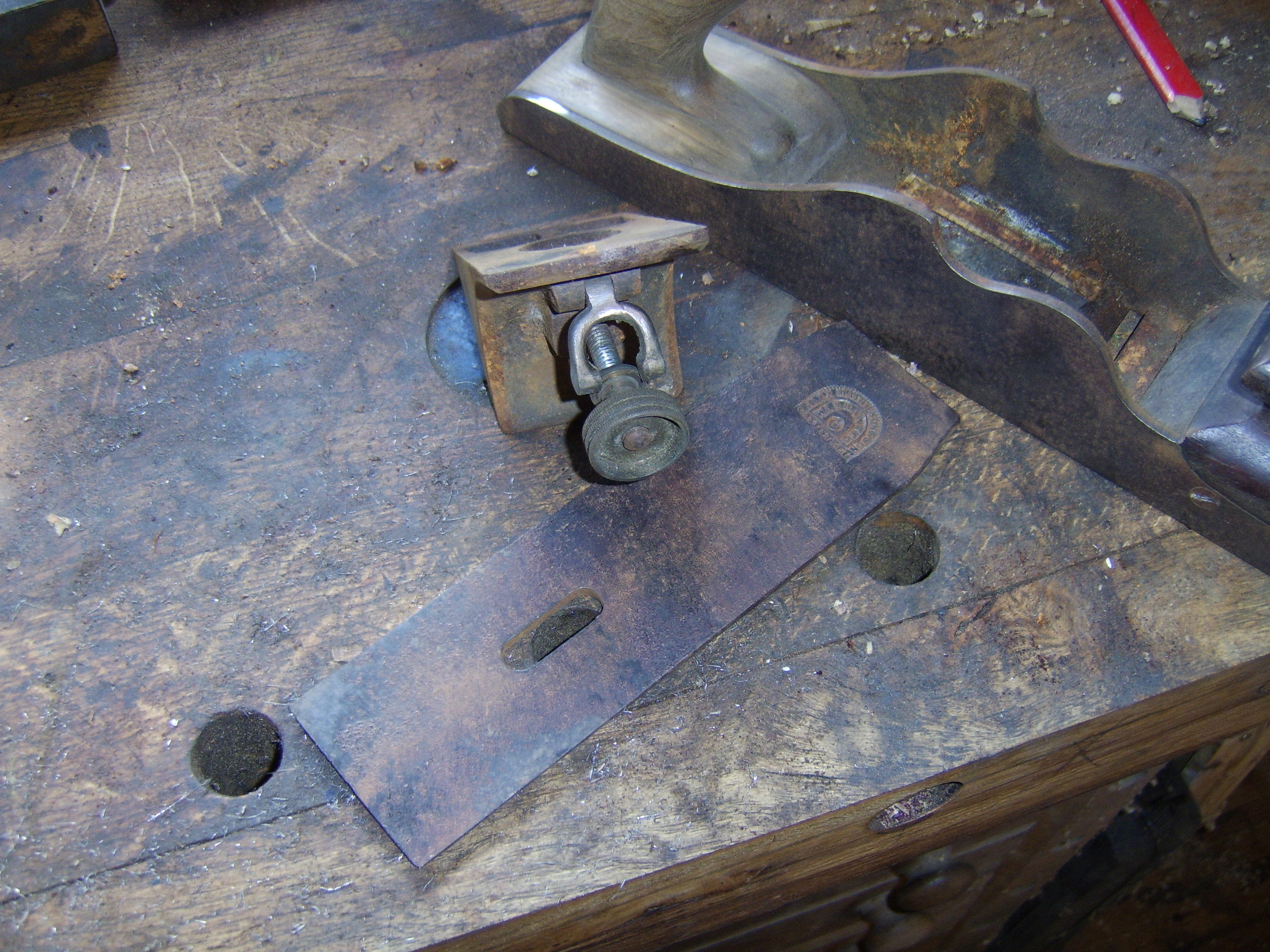 As you got it in the Pans, it is more than probable that it came from the Old Mathieson's "works"/shop that was just off Leith Walk 10 miles from from there.
You're a very lucky bissum, I live 500 yards from where the shop used to be and try to only get Mathiesons planes but it's a veritable nightmare finding stuff that isn't marked with the crescent works stamp as if it doesn't have it as far as I've been able to find out means it was Edinburgh made rather than Glasgow
F

That's very interesting. It's just dawned on me that there's no cap iron with this plane nor is there any provision for one on the iron, unless one is supposed to be installed as on the continent - i.e. loose. The only crescent to be found is on the iron itself. Unless there's something such as casting marks to be found under the wood, it's completely anonymous. The fact that there are no screw holes in the body to accommodate a brass or iron lever cap does indicate that what you see is all original - not an amateur modification. There's circumstantial evidence that this is a Mathieson but I'd be happier if I knew it figured in a catalogue or book somewhere.

There is, of course, the enticing possibility that this was a Mathieson experiment. Presumably such things exist, just as they exist with Spiers or Norris.
F

Also occurred to me in a blinding flash that if the frog is original then the iron cannot be, because otherwise there is no way of adjusting the depth of cut. The original iron must have been a straightforward iron, cap iron, lever cap assembly. Thus the Mathieson connection is probably a total red herring, other than the fact, as I stated, that the other planes bought at the same time and in much the same condition, were 99% Mathieson, and they were all bought in Scotland. (Smoother, bead, rebate and chamfer).

Stupid of me not to have seen this before. Which opens the possibilities even more, to include such as Spiers.

Maybe the best expert on Mathieson tools is Hans Brunner in Australia. He used to run tool auctions and sell online but has retired. However, his website at http://www.hansbrunnertools.com has old auction catalogues as pdfs with lots of pictures in - I've not been through all of these.
He did publish a book - Mathieson Tools, A Guide to Identification and Value http://www.hansbrunnertools.com/Mathieson.htm
which is available as a paperback or ebook. I can't see anything like it in there either.

However, you could try an email to him and see if he can suggest anything.

For what it's worth, my totally unsubstantiated guess is this.

There's plenty of evidence from catalogues, written accounts and user-made planes that it used to be possible to buy a professionally made cast iron plane body to finish off yourself, especially in Scotland. Your casting would normally have been fitted with a pair of infills, drilled through the cheeks for a lever cap, given a double iron and turned into a very nice panel plane.

In your case, the maker wanted to try the new-fangled bailey style adjuster and got hold of one. (I don't know enough about the tiny details of old Stanleys to say if yours might be by Stanley; if it wasn't, there were plenty of copies about.

The casting had no thick part on the inside for mounting the frog, so he had to drill and tap the sole. (To me, this suggests a pragmatic user, not a professional toolmaker.) With a pair of newspaper shims, this worked.

The front bun is pretty normal, but the rear handle is rather nicely dovetailed into a short "cushion" block.

For the plane to have worked with the Bailey adjuster functioning, it must have had an iron with a slot for the tab end of the yoke, plus a cam lever cap and screw to go into the frog.

Those have gone missing (or just possibly were never bought). To press the plane into service, its owner has bought a simple, uncut iron. (Number 1370 in the Mathieson catalogue, the cheapest option.) He's drilled and filed a slot into it, to take a screw through into the frog. The slot allowed for adjustment and wear as the iron was sharpened. The rotary adjuster was wound back out of the way. Adjustment would have been by hammer tapping.

I know nobody can prove these things one way or another, but to me that seems plausible as the actions of an economical workman and is the sort of story written only in the tools.
S

the Old Mathieson's "works"/shop that was just off Leith Walk
Click to expand...

Droogs? Whereabouts please? No1 child lives in Dalmeny Street and I wouldn't mind a dander up memory lane when she and her mother get too "virtual retail therapy" for my liking...

They used to have a shop near to the junction of jane st and leith walk #90 Leith Walk as far as I have been able to find out. Most probably there to service Leith docks and all the companies that were in and around them on Salamander st. They also had 2 works one in Gilmore St at where Pauls Work used to be in Fountainbridge, basically where the union canal ends. And one at 48 Nicholson st, which is now a big Lidl - witht he middle of lidl seems appropriate really

Location maps and pictures feature in the first few pages of the Hans Brunner book. I don't like to promote Amazon but the Kindle version is only£2.99 at the moment...

awesome, all his books are "free" if you have kindle unlimited
will have a good look through and order those i like
S

Thank you Droogs and Andy. I have walked past this locale a few times without realising its significance.

I have Brunners book on Infill planes which deals with Spiers, Norris, Mathieson and Preston. No, there's nothing like this anywhere. I think, Andy, you are right. The sides of the plane are not chamfered as all other panel planes are. This is a casting, not dovetailed and the nose of the plane has a nice little ovolo moulding to it. Some time ago, I bought an infill smoother off E-whatsit which was obviously intended to be fitted, by the user, with an iron and a brass/gunmetal lever cap but there were no corresponding screw holes for the pivot pins/screws (this is logical as the maker didn't know what thickness of iron was going in the plane). The plane was supplied with an overstuffing front and back in what might be one of the cheaper mahoganies fixed in place with screws. This must have been purchased 80 to 100 years ago or more with the intention of making a DIY plane but without the hassle of fitting the wood. At that time, you could get brass lever caps in any ironmongers (happy days) but for whatever reason this never happened and, amazingly, the tool survived in it "virgin" state until I got it and finished it. As you say, Andy, this "Mathieson" plane must also be a similar plane. Panel planes were expensive then just as they are now so this was a reasonable compromise.

What to do with it now ? As it stands, it's a curiosity but my workshop isn't a museum so I will have to decide whether to buy or make a suitable lever cap or whether to scrap what's there and install a nice Rosewood rear filling and fill the two screw holes. Decisions, decisions.

I don't know Prestonpans but I know Edinburgh reasonably well and Perth very well having lived there for over twenty years, man and boy.
F

P.s. - re the original plane - I do have all the fixing screws.

Re what to do with the plane now - I guess one consideration if you want to put it to use is that you presumably want a double iron. You can't have that if you are just relying on a screw into the frog to hold the iron in place, as the last owner shows us.
I think if it was mine I would try to fit a Stanley style iron and cap iron, with a corresponding lever cap, as the first owner presumably intended and possibly did. This would not need any modification to the plane as it stands.
Maybe as a first step, you could use parts from another plane* and see if it does all work ok and is adjustable with the wheel and yoke that it has. Then if you want to have it complete and usable see if you can get bits suitable for it which are close to it in age.

Yes, this was my first thought. All that would be necessary is a 2-3/8" lever cap - I have all the rest. I'll clean it up and try one of my No 5-1/2 caps in it. If it works well, than I'll keep it in it's present configuration with a suitably old lever cap (e.g. without a brand name). If I get bored with it in the future I can always rebuild it as an infill plane.