Is Imitation the Best Form of Flattery (another drill thread

And we can't have too many hand drill threads...

It is said that imitation is the finest form of flattery.

But is this anything new.

Back in January 1931 C & J Hampton released a range of bench planes and other tools under their Record brand name. It’s well known that these planes were direct copies of the then current Stanley planes. Record so closely copied the Stanley USA type #14 bench planes that even the non-standard screw threads (a relic of the mid to late 1800s) were the same. Components between Stanleys and Records of the period are completely interchangeable.

I wonder what Stanley though about this. Maybe they were so enraged they bought out JA Chapman and started producing planes in the UK just a few years later.

Firstly some dating (with help from the Millers Falls website oldtoolheaven.com, and my favourite Record website recordhandplanes.com).
The Millers Falls No.12 was in production from 1874 to 1957, with my example dating from between 1915 and 1925.
Their No.118 was produced from 1913 to 1957, with mine being post-1931.
And (I was surprised) Record only produced their breast drills between 1933 and 1938.

The breast plates: (the Record in the centre in all photos) 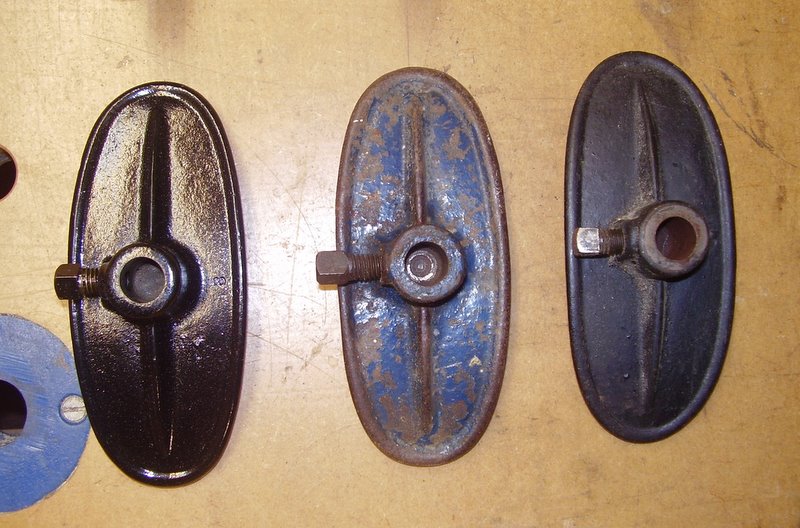 Looks about the same on all three. All have the same size spigot hole and so are interchangeable. The tightening screws are 5/16” with MF using 20tpi, while Record used 18tpi. 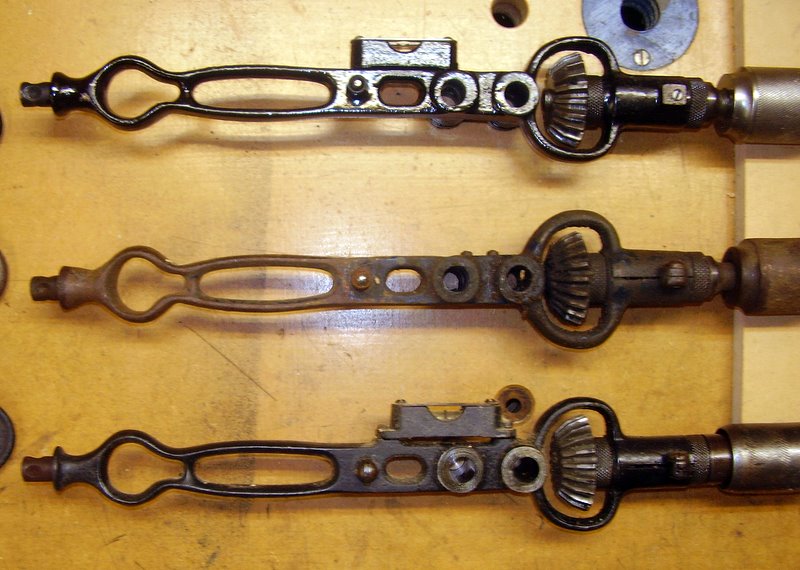 Very similar in shape, but sufficient minor differences to indicate they didn’t quite come out of the same moulds. One difference on the Record is the beefed up frame around the pinion. 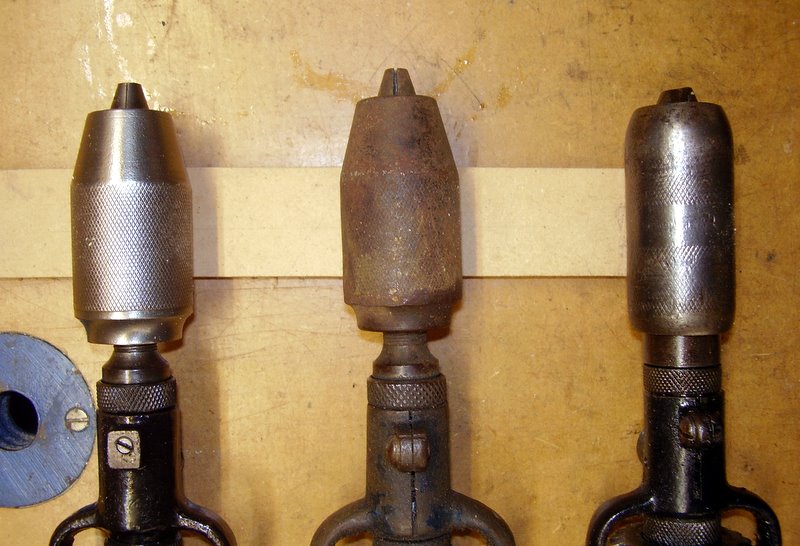 I haven’t figured out how to remove the two-jaw chuck from the Millers Falls No.12. However the No.118 and No.145 chucks are so similar, they even share the same 9/16” x 24tpi spindle thread.

Handles: All three have handles that are adjustable to 4”, 5” or 6” crank and mounted on a 5” diameter drive gear wheel. They’re interchangeable. The handles are attached using identical knurled thumbscrews with a thread of 22tpi, however the Record thread at 5.5mm is around 0.4mm greater in diameter than the Miller Falls threads
Both the No.118 and No.145 are missing their side handles. The No.12 uses a ⅜” diameter thread with 18tpi. It doesn’t fit the No.118 nor the No.145, which appear to both use a ⅜” 16tpi thread (I’ll check this out when I get my hands on a ⅜” BSW or UNC bolt).

Gearing: All three have a 5” diameter drive gear wheel. The drive gears have 56 teeth on the outer ring and 20 teeth on the inner. The pinion gear has 24 teeth. They can all be interchanged (although the older No.12 uses a different shaft locking mechanism).

So, did Record shamelessly copy the Millers Falls breast drill, just as they copied the Stanley bench planes?

Without a doubt they did.

The only thing I can say in Record’s defence is that at least they manufactured quality copies, using engineering standards up there with the originators of the designs, and (I assume) they paid their workers a reasonable living wage.

But it does make me pull my horns in a little when I snub the products of Quangsheng, Woodriver, et al.

For another slant on this, have a look at the 1935 Buck and Hickman catalogue, conveniently available on line at Rose Tools.

They listed all three of these drills. The MF 12 and 118 shared a picture, with the only noted difference being the 2 or 3 jaw chuck. Both cost 20s 6d.

So they weren't competing on price. Can you see any difference in quality?

Maybe some buyers preferred an American tool while others would only buy British?

(Just to make it even more intriguing, the apparently similar Chapman copies (the ones that Stanley were about to buy up) were cheaper, at 12s, 12s 6d or 15s, depending on your choice of chuck for the model 97, 98 or 99.)

Wasn't there an embargo by the U.S. on imports from overseas during and following the Depression (Circa 1929 - )? Britain adopted a similar stance in terms of only importing from within the British Empire and I think it's among the reasons why Stanley couldn't begin producing tools in this country until the late 1930's and much the reason behind Record picking up the reins and seizing the opportunity regarding British tool manufacture in the early 1930's.

Copies? Yes, but damned good ones based upon expired patents (Plus a few of their own designs) and good old British know how.

GazPal":2kh5ddim said:
Wasn't there an embargo by the U.S. on imports from overseas during and following the Depression (Circa 1929 - )?
Click to expand...

That would appear to be close to the way it was:

'The first time Record Adjustable Iron planes were seen was in the No. 10 catalogue January 1931. There were 8 adjustable iron planes from 03 to 08 and three block planes No. 0110, 0120 and 0220. Record marketed these planes as an entirely new British product. Government import tariffs of the late 1920's assisted British manufacturers in combatting the influx of foreign hand planes, mainly from the U.S.A which at that time dominated the market. A "Buy British" campaign was also launched to combat the depression in the United Kingdom during that period.

Record adjustable iron planes numbers 02, 03, 04, 04½, 05, 05½, 06, 07, 08, 010, 010½ and a number of block planes were copies of Stanley Bailey planes of that time. Stanley patents by 1930, had passed their expiry date for protection thereby allowing many competitors to copy their products without patent infringement. There were many imitators making copies of Stanley planes but Record never compromised on quality and it was not long before they were accepted by the woodworker of that time.'
From http://www.recordhandplanes.com/history.html

Presumably this was why Stanley acquired Chapman in the 1930's, to bypass the import tarrifs, import controls continued after the war as well... http://www.history.ac.uk/reviews/review/38 , hence the Beatles played Hofner copies of Fender Strats and not actual Fender guitars!
V

AndyT":3i0s0j81 said:
Can you see any difference in quality?
Click to expand...

I haven’t put any work into the Record 145 yet (I’ve got enough half finished tools on the go :roll: ) but it spins freely, not quite to the standard of the MF 118, but freer than the MF 12.

The Record also has a kink in the frame about 1” forward of the breastplate. I don’t know if this is a manufacturing fault or damage that has occurred since (I’m also not sure if I’m game to heat it hot enough to attempt to straighten it)

Stanley patents by 1930, had passed their expiry date for protection thereby allowing many competitors to copy their products without patent infringement. There were many imitators making copies of Stanley planes... ?
Click to expand...

Yebbit, why did they copy them so closely?

WS Tools also made “Bailey” type planes, but rather than copy EVERYTHING right down to the wog threads, they changed the styling – distinctive side profile; brass lever-caps, etc. I know the patents had expired and as such there was no legal reason not to copy Stanley, but copying down to such fine detail still seems a little immoral.

Maybe, with the British government encouraging local firms to replace US exporters, Record figured there’d be a market for spare parts for Stanley planes already in the country. That would be a valid reason to so closely clone another manufacturer’s product. I suppose as a strategy, that worked with the Stanley clones (for instance my Record 06 foreplane has a Stanley frog). On the other hand, Record’s Millers-Falls-drill-clones only lasted 5 years.