Hello folks
I managed to snap one of the threaded rods that connects the motor assembly together.
One of them was very bent, and was causing issues with assembly.
Looking at the inside of the fan shroud, you might be able to see where the fan was making contact with it.
I was thinking of replacing the threaded rods with stainless steel ones, to enable me to have this shroud sitting further away to avoid rubbing with the plastic fan,
and also the fact that these four rods are taking the full weight of the motor.

Checking with a magnet, these rods are of normal steel with a "smooth section" for lack of a better word, and is a regular thread.

Why does these threaded rods have a smooth section?
Can I just ignore this, and replace them with stronger regular stainless threadbar with no smooth section.
I see no good reason for this, as nothing will be in contact with them.
I was thinking of getting stainless nuts while I'm at it.
Thanks again 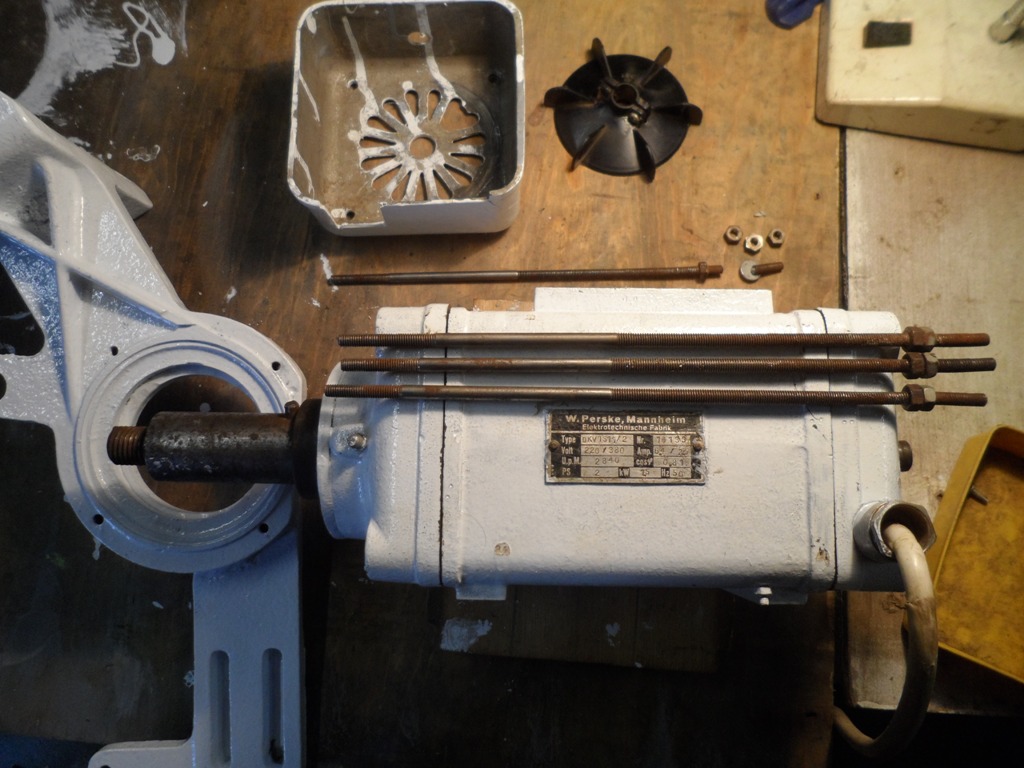 Its cheaper to use iron. Its even cheaper to not thread the entire length of the bolt.

Stainless threaded studding will do the job, nyloc self locking nuts are fine. Torque on tightening is the only important factor here.
The only difference is cost, which when youre making a million motors, is very important.

I would have thought that it would be cheaper to just buy standard threadbar from a supplier, rather than make them
yourself?
I don't think this motor is very old, but cannot find info on the machine.
I think this machine was a prototype judging by a whole lot of things.
Thanks Sunnybob

Even if it was a prototype, which is unlikely as prototypes usually show blocky brackets and many machining marks, Its pretty certain that things like the armature body and bolts are standard parts adapted to fit the new shape.
Fully Threaded studding will always be more expensive than rods with threads at each end even if its only fractions of a penny each.

In most cases threaded rod is not high strength steel whereas rolled from solid can be. Grade 5 verses grade 8 or 12 over here. I don't know why the originals have such a long thread on one side unless they use one rod for a number of lengths and cut off what wasn't needed or if someone before you replaced the original. If you are going SS make sure they are equal or better in strength to the ones you are replacing.

The rods are longer to thread into the bracket on the left.
Here is another picture to explain things.
Not sure how this fan is supposed to cool the motor, but that's a different matter.
The motor runs grand.
I don't get the impression that these rods are extra strong, but I'm not willing to do any destructive testing yet.
Thanks for putting my mind at ease folks 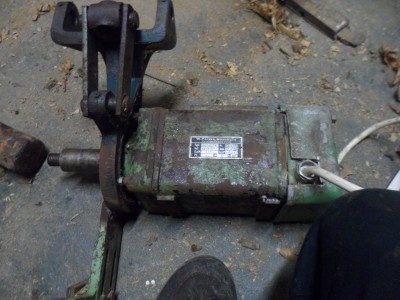 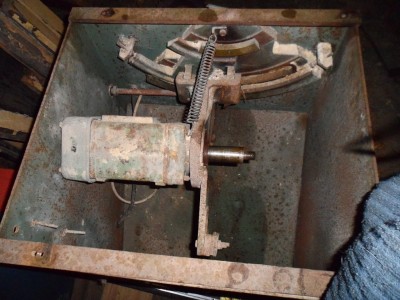 when assembling a motor it is useful to have longer threads to allow you to loosely assemble the parts then use the nuts to draw the pieces together tightly and evenly.
Torque is everything on a motor, and its always less than you think you need.
DO NOT strong arm the nuts and bolts, you'll overload the bearing cups which are only cheap alloy.

These four threaded rods are definitely not longer than needed, in fact, they are too short for my liking,
as they thread into the mounting cast metal part way, which supports the motor.
I will make them thread into the full thickness of the mounting assembly when I buy some rod.

At the other end it also needs to be longer than this for a decent job, to reach beyond the end bell, and well past the plastic fan, so the alloy shroud can sit a bit further away from it without rubbing against it, (see witness marking)
essentially floating it by means of sitting on nuts, with another four nuts to keep the shroud on.

Just for giggles :lol:
Do you think the plastic fan can actually serve a purpose sitting outside of this TEFC motor?

Interesting to know about the different grades of threaded rod though.
I wonder what's the best way to go about figuring out the grade of this rod.
Deflection tests I suppose, as that's where the strain is going to be.

I could give the broken one that's stuck to the magnet a rub with a file to get more of a clue.
It might look like I snapped it by overtightening, but it was really bent from a fall or something,
I just tried to straighten it to gain as much length as possible, and to a lesser extent to aid assembly.

It seems like I've nothing to lose by getting a regular stainless length or two.
Never really tested how much deflection a stainless rod this thin has, as I would always go for a
thicker rod.
I hope it won't bend like a hose, as I might have to weld the snapped rod, if I can't buy some
locally.

Nice to know you folks seem agreed that there's no special reason for the smooth section, so that's the most important part.
I was kind of thinking I was wasting your time, but didn't want to get bitten by ignorance.

Another thing about this strange motor is the nipple on the left of the top picture..
Do ye reckon this for oiling the bearing or something?

That would be a grease nipple. DO NOT put oil inside a motor, it will fly everywhere and short out. Very high melting point grease will lubricate the bearing, but to me that smacks of being a very old motor. When I was a lad it was common to grease bearings every so often, but I havent seen a grease nipple on a small motor in almost 50 years.Do you have any idea of age from the data plate?

Motor retaining bolts are not structural. In your case it would make no difference if you used stainless or iron. Do not overtighten those rods. All of the weight of the motor is taken on the front collar.
R

If that is a grease nipple then you might want to consider replacing the bearings for modern sealed replacements.

If you do think about replacing the bearings, pay close attention to sizing. That motor is old enough to have bearings with Imperial measurements, where I think even the USA now uses metric sizes.
The bearing size should be stamped on the side of the race, but at that age, who knows. :roll:
S

The fan moves air over the outside of the motor for cooling. That's how it's meant to work. If the motor was meant to dissipate more heat the outside surface would be finned.
It's probably not an issue but if you are repurposing en old motor, be aware that motors can be designed for different duty cycles. On modern IEC standard motors these are coded S1 through S8
https://www.engineeringtoolbox.com/iec- ... d_739.html
Q

If you're planning on moving the fan shroud away from the impeller, be careful not to move it too far away, as you'll be reducing the airflow the further you move it.

Thanks again folks
Not really needing this machine at the moment, as I have another Startrite working sound for me.
It was bought for 100 euro's, and I was planning on using the motor for a cyclone,
whilst doing something else productive with the rest, as I thought it was a repurposed PTO farming one from the picture, that had got a modern motor affixed onto it.

That all changed when I seen that it might be a good machine.
Now I just want to get it assembled and tucked into the corner, so I won't be doing more than I need.
Not even sure how the assembly will go, as it was in partly disassembled state, with broken bits.
Couldn't watch it rust to bits though, so it needed some welding done to it, and some paint.
It will make a nice winter project...that was a plan that didn't happen.
Now I can't move in the workshop :roll:

This German motor is no older than 1954, quite old I suppose, but not General electric old.
Maybe I'm desensitized from watching too many Jack's, and Wallace's though

I will peck away at it for some time making bits and bobs for it, so don't be expecting manglitter too soon.
Cheers
Tom

If its german made it will definitely have metric bearings. Get new ones when you rebuild.
You must log in or register to reply here.

New shaft on a motor