I don't understand why there has been a big fuss over the metric system. (Officially the UK has been metric since 1965.) For me, the solution is simple - use metric rules and forget imperial and all the conversion formulae It's exposing you to making mistakes and cock-ups.. The result of using metric rules ignored thinking in imperial, II found that my accuracy improved and the finished result was good. (working to the mm instead of messing with fractions in the imperial system reduces measurement errors.)

In 1965, when I was in technical school, we switched to metric, this made science tricky going from BTUs to Watts etc, just before GCEs. But in design and making the switchover was much easier. In 1975 I re-trained as a D&T teacher and in my first lesson observation the teacher in charge asked the 12 year olds to cut inch squares of cloth, to her embarrassment one of the children asked what an inch was. Throughout my career there was a lot of resistance to metric from colleagues who didn't teach maths, science or D&T. Before I retired I was working with disabled children. One day, making xylophones, the classroom support staff found, on the Internet, an American design with the proportions for the notes. They were thrilled as they were in inches, which they said they liked. That was until they had to help the children work out which was bigger 7/16 or 7/32 and they hadn't a clue. I think that summed up one of the reasons why we have such trouble (in this country), we like to live in an imaginary past when everything was easier and better and resist sensible change.

I use either but was raised with Imperial.....
for a laugh...read on....
I was in big DIY store near Bordox,FR....and was using my Stanley fat boy tape......like u do....
went thru the check out no probs but security pulled me over......a low educated giant of a chap.....
straight off he accused me of stealing it.....now everything getting loud and pushy....with plenty of spectators....
so no problem I asked if he would call the manager over.....
another dumpling in a fancy suit arrives.....
I explained the problem politely and got the usual French shoulder shrug......
When I opened the tape for them to see it was Imperial/metric, these are not available in France.....
So I gave em both barrels......made my day......hahaha.....

I use imperial for woodwork and metric for metalwork

I watched a great youtube video that explained that during the Apollo Space Program all the American computers were programmed in metric, but to give the astronauts something they could easily visualize all results were converted back to imperial ! There's a couple of great examples of official NASA documentation that says things like
"The cross-bar is 4.82 metres long, and has 15 3/8's inch holes spaced 32mm between centres" haha 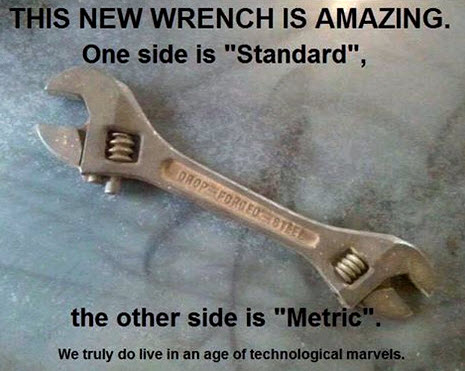 when making things that were made in imperial its actually dead easy to use imperial. its a dead duck to neglect a thousand years of size specific tools and things. ie window rebates are 1/2 inch. doors are 2ft 6in. the rails and stiles panels are batten, deal and plank etc etc. wardrobes are 2ft deep
but metric is Good for measuring but I design in imperial!
J

heres why things are made to set(imperial )sizes

For me Imperial just makes it harder. I always work in mm.
I think it is whatever you were educated with. I would love to be good with imperial, Americans are very fast with fractions as it becomes natural.
My dad was trained as a toolmaker pre metric and his brain works in "thou".
Of course these are both modern measurements on the grand scheme of things. The Japanese used to use a system where there is no measuring as such just proportions derived from the longest part. With designing things the eye is usually right and tuned in to the golden ratio naturally. That is why all the modern housing developments look strange they are designed to a building regs book and ignore the basic principles of good architecture.
Ollie
Last edited: 18 Oct 2020

I grew up with metric in school and imperial at home so while I'm happy with either, I don't faff around with things when they get to 5 5/16s and all that rubbish. I'll say something is 6ft tall or I need a 2 inch board for example, but if it needs to be actually accurate I'll default to mm. My usual tape measure doesn't even have imperial on it.

But we live in a country where we buy petrol by the litre but talk consumption by the gallon on cars that are made entirely of metric parts on roads marked only in miles where imperial hasn't been taught much in schools for the better part of 40 years.

If you've only known metric, I can understand why you might find imperial a bit difficult. IMO there are two aspects to it:

I reckon that if you work in imperial for two projects, you will crack it.

Then there are the things where it doesn't matter in the least bit whether you choose metric or imperial. For instance, yesterday I needed the depth of a groove which I'd cut to the point where it "looked right". I didn't actually need the numbers associated with the depth but rather the actual depth. The nearest thing to hand was a metric combination square, so I measured the depth with it and then transferred that to a wheel gauge without looking at the numbers.

Secondly, if you e.g. want to divide a piece of wood into e.g. 7 equal parts, don't bother with measuring and faffing about with calculations (either metric or imperial). Just use a pair of dividers. No Maths, no headache, job done in seconds.

The big advantage of metric is that it really facilitates complex calculations. You wouldn't want to be without it if you were a physicist or an engineer but how often do you need to do complex calculations in woodwork? The first big advantage of imperial is that it tends to get you thinking in halves, quarters etc. and that is something which is very intuitive and natural and it is there that metric fails badly.

The real trick is IMO to avoid numbers except where you must have them. For instance, I started a project recently where the length was decided by me holding out my arms and saying to myself "about that long" as the top had to fit into a space. "About that long" turned out to be about 37 1/4". I decided that the legs needed to be about an 1/8 of the total length in from the ends. Cue the dividers.

Finally, the really big advantage of imperial is the absolute mass of old tools which are available. And of course there's the matter of N American tools still being in inches. I can imagine somebody ending up with imperial chisels but metric drilling bits. Only rarely do you have to have both e.g. I've got two sets of Allen keys.
C

Well thanks Andy Kev, I know how to divide up easily by laying a ruler across at an angle but never used dividers for the same thing and can’t quite picture it, would you care to enlighten me/us please? Ian
G

This device can be used to divide up equidistant things, but various laws dictate that if you took the trouble to build an up-to-8 steps version your next project would need 9.

I too am old enough to have learnt both units. I can visualise imperial better but I tend to work in whichever side of the tape measure gave me a nice number, if the thing is clearly 12 inches long then I'm not going to call it 304.8mm.

On the subject of using tape measures, despite me now having a metric only tape that is marked both sides on both faces I STILL read numbers upside down because that's how I've done it for years on tapes with both metric and imperial.
C

Thanks Gridsquat, yeah I’ve got it now.
Yes I’m the same as you I use whatever is nearest nice round number, but once past the outside dimensions of something I just do everything by proportions, golden square and transferring from one bit to another. Ian
A

Cabinetman said:
Well thanks Andy Kev, I know how to divide up easily by laying a ruler across at an angle but never used dividers for the same thing and can’t quite picture it, would you care to enlighten me/us please? Ian
Click to expand...

Take a piece of wood or a line or anything which represents a straight length. Say you want to divide it into five equal lengths. You guestimate what looks like a fifth of the length and open up the dividers by that amount. You then "step" the points along the line. If you've fallen short, you open up the dividers by a guessed fifth of the amount of the shortfall and close by a guessed fifth in the event of an overshoot. Repeat the foregoing. Once you've made a couple of adjustments, you are usually bang on. Then you can press the points in a bit to mark the wood.

If you're going to have to repeat the division on pieces of the same size, just set the dividers to one side and you'll be ready to do it instantly. The beauty of this technique is that other than deciding by how many times you want to divide the line, you never have to work with numbers.

And as AndyT said some pages back, it is handy to have some drills in metric and imperial sizes so surely one will give a good fit. Now my auger bit collection has several of the popular sizes, 3/4 and 1/2 - this is useful because I know the shiny plated 1/2" bit is a scant 1/2, the old gedge pattern is a slightly generous 1/2, and that Irwin one is almost a millimetre over.

But if you think that's fun, try working in electronics. Lay out a PCB - half of the components are legacy decimal inch sizes - once 0.1" grid would suit anything. Now newer packages are metric. Some are metric but with decimal inch pin pitches. The CAD package of course supports either a metric or imperial snap grid, and you are forever switching to suit the devices on that bit of board. But better remember which units each feature was drawn in, or get ugly not quite aligned tracks when you edit one while set to metric grid that was drawn with an imperial one. And you think woodwork is hard !
L

MikeG. said:
Also, why the hell does a 25 year old, say, want inches on his tape measure?
Click to expand...

Despite being born well into the metric era I will often think in imperial to size something up when sketching a rough design: i.e. "that hand rail should be about 3' 9" from the floor" but will convert to metric and round non-critical dimensions to the nearest convenient standard size when I actually do the detailed design drawings and prior to working out any fine details.

Pretty much every British young person I meet is similarly at least somewhat conversant in feet and inches, and generally has a natural feel for sizing up human sized objects in imperial dimensions (and mostly sizing up human like weights in stones too).