An obscure musical instrument, but I wanted one! It looks like this: 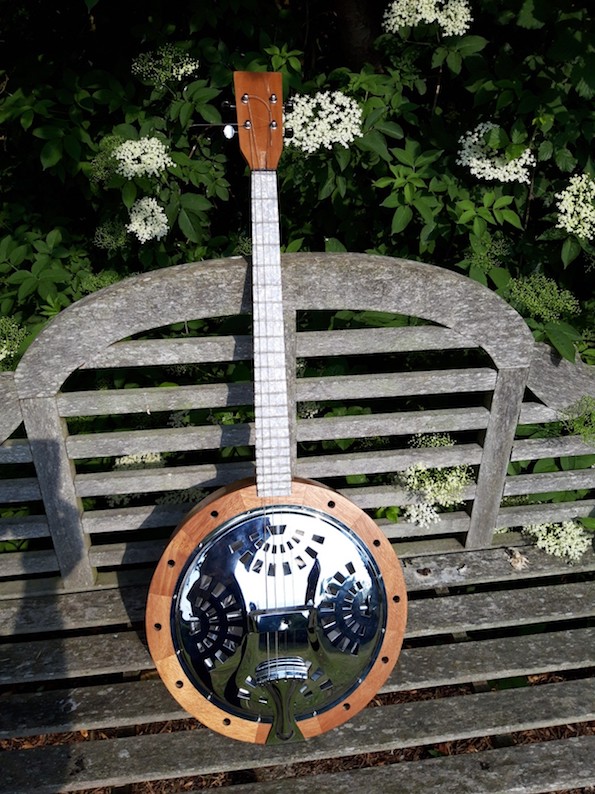 And here it is in action:

Making one of these is roughly 70% woodwork, 30% engineering and about 98% swearing. I posted build pictures on a luthier site, and so could reproduce them here if this interests anyone. The same (or similar) construction techniques could be used to make an acoustic slide guitar if anyone has ambitions in that direction.

Wonderful! I'm a musician, one day I'll build myself an acoustic guitar.
S

Very nice.
How is it tuned - 5ths or something else?

Construction would be nice to see. Curious how you thick the sides are and how you aranged the sound well.
P

I'm very much inventing this as I go because I couldn't find any images of the inside, except for one which was heavily modified to take a National cone. So I'm largely working from what the few repairers have written, and my gut feeling about what will work.

The core of the instrument is a plywood skeleton: 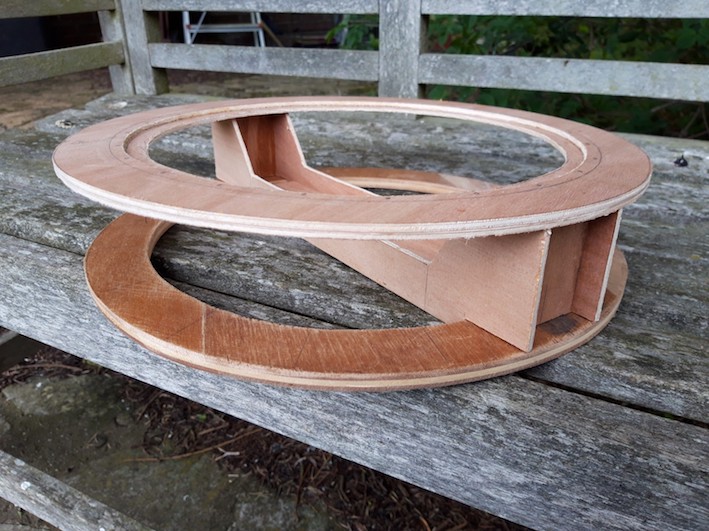 The cone sits in the hole in the top, and I've made a pocket for the end of the neck. The neck will bolt on, and its angle can be adjusted with shims.

Here are the skeleton components:

Top rim, which is made of two 3.5mm plywood rings (one with a bigger hole than the other). This provides a lip for the cone to sit in. My one question is whether I need reinforcement under the lip - I'll decide once the skeleton is glued together by putting the cone in, putting downward pressure on the cone, and seeing if the lip seems stable or not. If not, I'll glue another layer of plywood underneath. 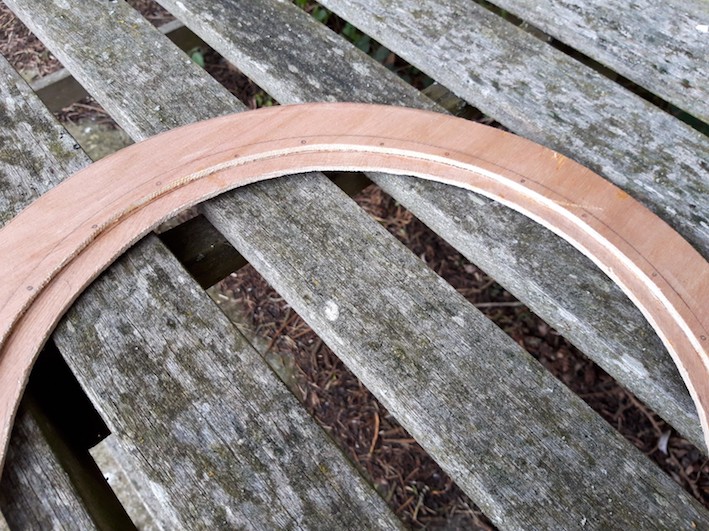 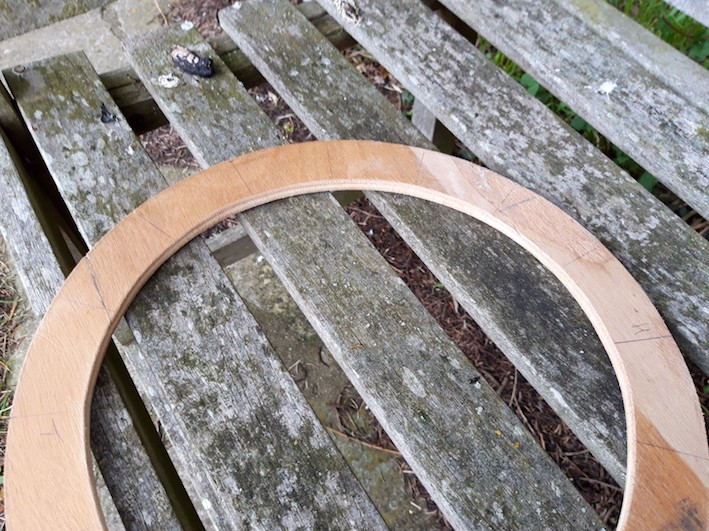 What I'm calling the connector - basically a plywood I-beam with mahogany blocks at the neck and tail. It's cut out along its length to make space for the cone. This part keeps the top and bottom rings apart, and also take the pull of the string tension (which is trying to compress the top and stretch out the bottom. I'm (fairly) confident I've made this strong enough! 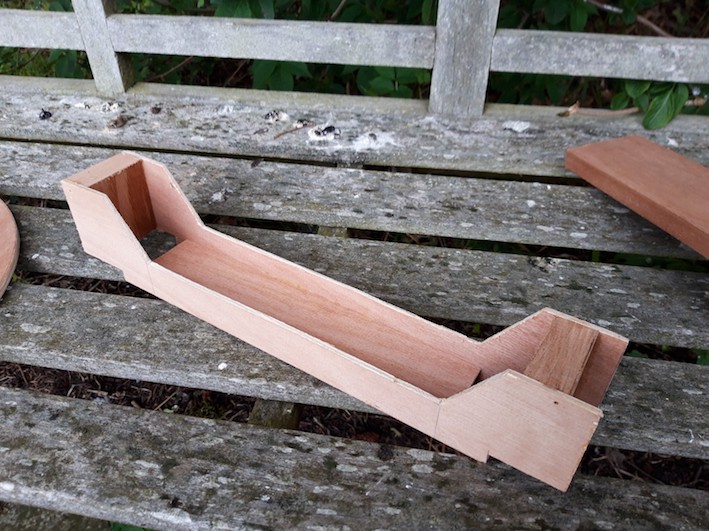 Form here on in it's just cladding the skeleton, bolting on a neck, dropping in the cone etc. Of course, I have lots more pics ...

The sides are just under 2mm thick (they're not structural, but sides that thick are tough enough to keep an acoustic guitar in one piece, and any way, anything over 2mm is tough to bend - I use a hot pipe).

The back is another matter. What kind of fool would plan to make a 12-piece back, you ask? This kind obviously!

Partly aesthetics - it's a wide circle, and it would look pretty dull if it were completely plain.

And partly available wood - I could cut a two-piece back with the join down the centreline, but it's hard work resawing a 7 inch wide plank, and would still look fairly dull.

So instead I cut 12 triangles, each of which is slightly over-size.

I glue three together, glueing them face down to some stout printer paper, to make quarter backs. The joints are end grain to end grain, so they are very weak. The paper is pretty good as a reinforcement, and will anyway be removed later. 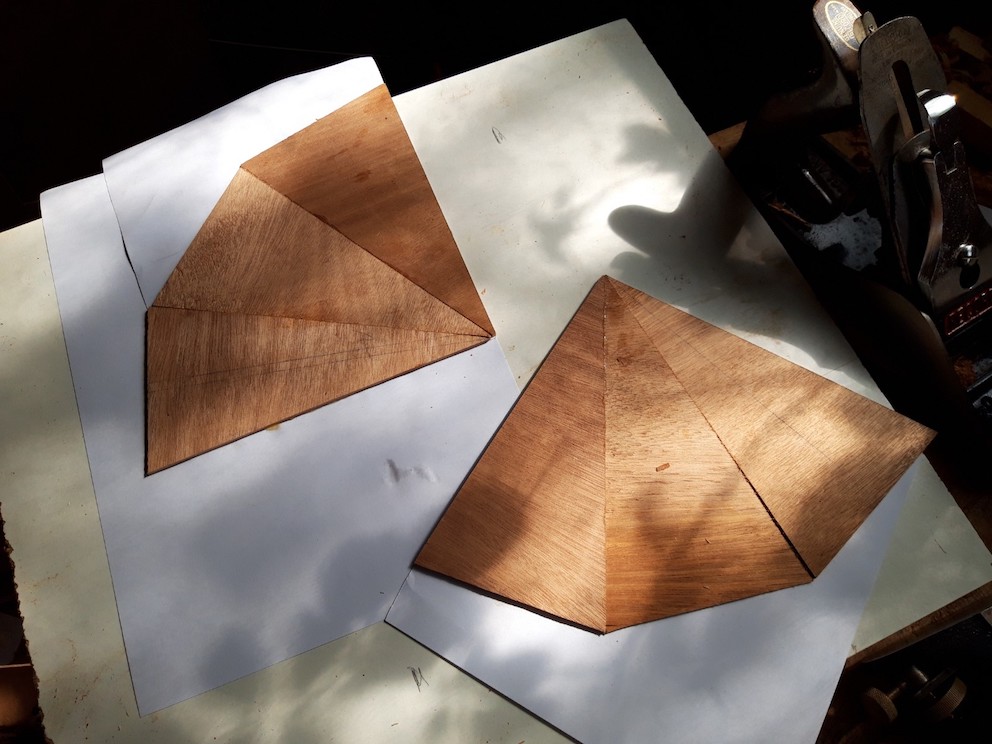 Then I trim one side to make the whole thing closer to a right angle, and glue to a second quarter back to make a half back. 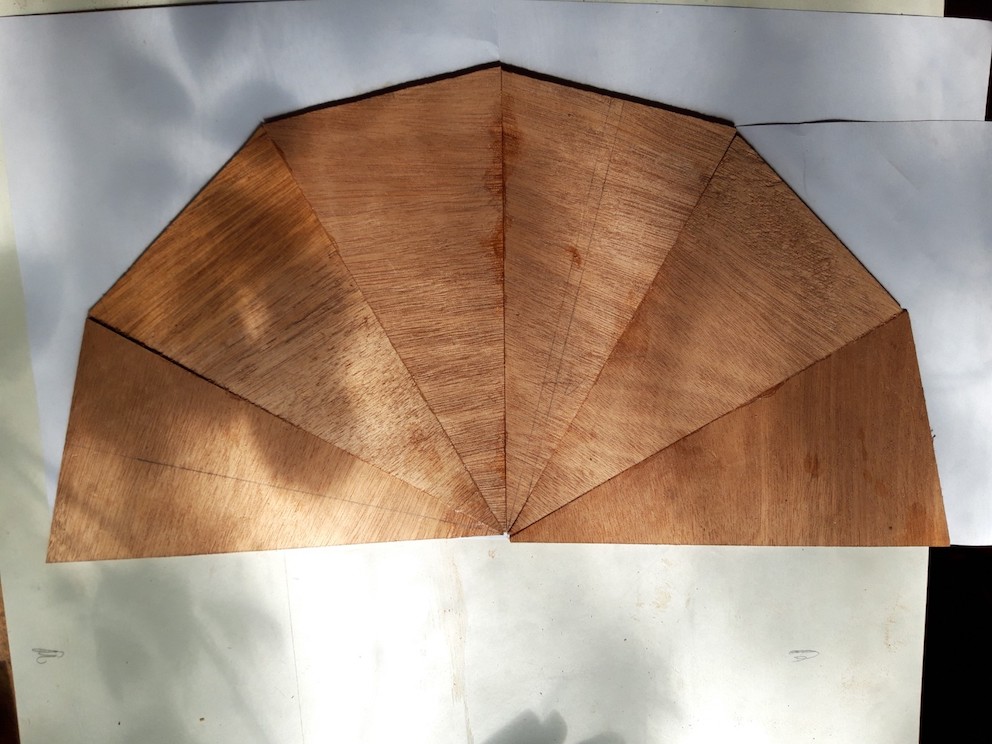 You will see that each quarter is still a little more than 90 degrees, but I'll plane the open side back to a straight line before joining the half backs. The final result won't have exactly equal segments, but I'm hoping that won't be noticeable!

Here's the visible outside of the back once it's assembled: 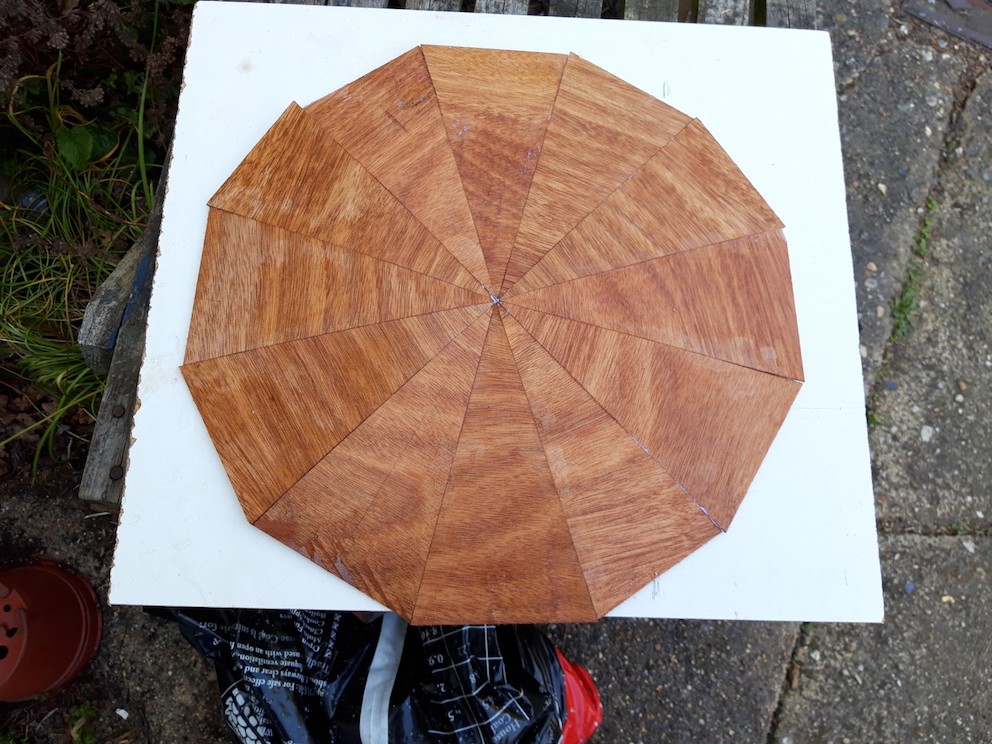 The inside is reinforced with brown paper (although it looks grey in this pic). 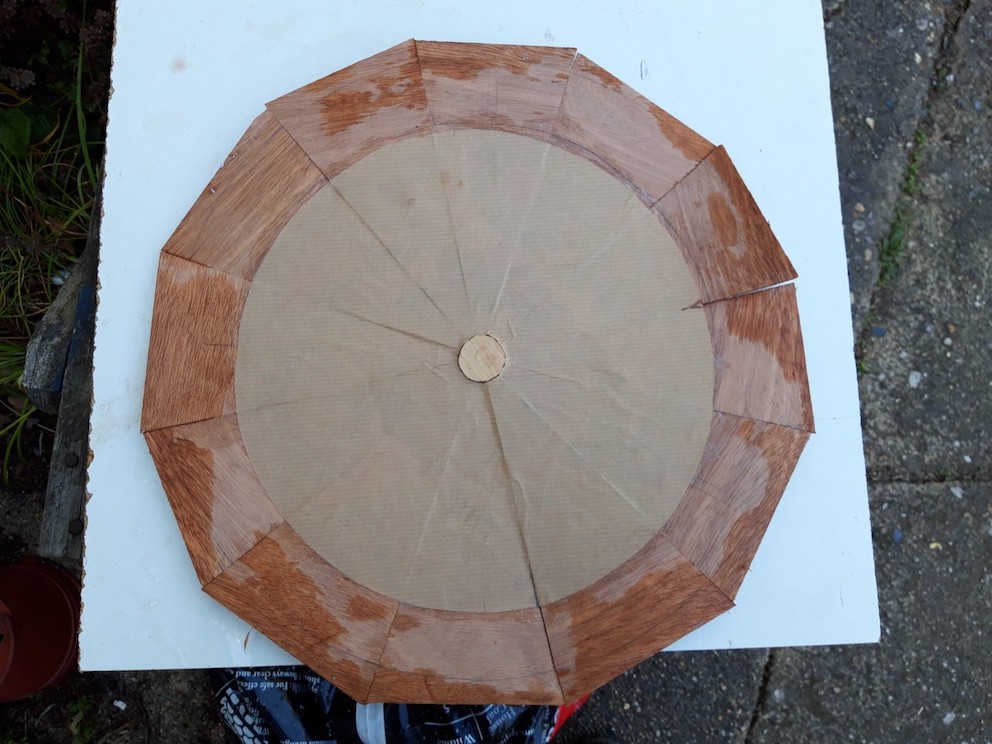 Some segments are dangerously thin at the rim, so I'll laminate some mahogany inside before I glue up, to give me a reasonably even rim. Then the final challenge will be to sand the back without sanding through the thinnest parts! Livin' on the edge, me.

And once shiny, it looks pretty much OK: 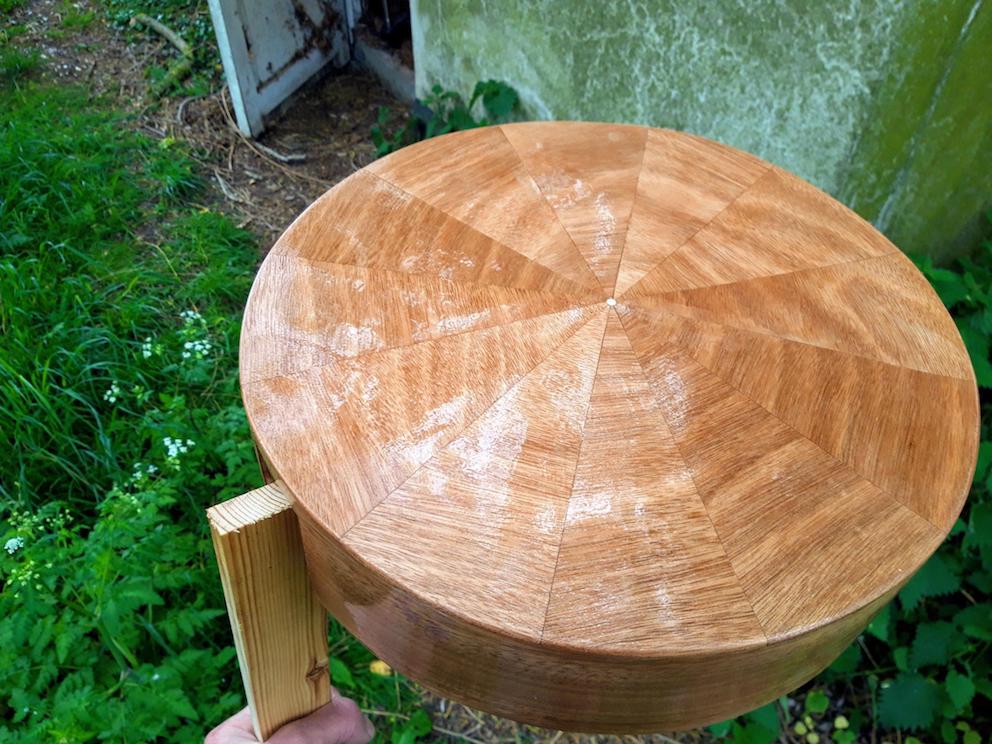 Thanks for posting that. I build cigar box guitars and junkyard instruments but had not heard of a Tenotrope before. It does have a nice bright sound.
Regards
John
J

That is a very lovely piece of work.
I'm far from qualified even to attempt it, (except for the swearing part!)
P

Most of the swearing came after this stage - getting the neck angle right, setting up the cone so it sounds sweet and not like an old dustbin lid, and so on.

I won't post all that here, but if anyone decides to make a resonator instrument then do PM me, I have hard won experience!

looks great! I liked the video as well, it's always good to hear what an instrument sounds like as well,

did you buy the metal resonator part? I presume you didn't make that bit

I've always loved resonator guitars, so this is an interesting post.

thetyreman":2vm7x5yo said:
looks great! I liked the video as well, it's always good to hear what an instrument sounds like as well,

did you buy the metal resonator part? I presume you didn't make that bit

(edit just seen that you bought the metal part from china) :lol:
P

Oh yes, you have to buy resonator parts unless you have very advanced metal working skills!

Mind you, a few years back I combined the ideas of tin can resonators with the tri cone concept to produce the world's first Tri-Can ukulele, powered by three Asda red kidney bean cans. It worked but not well (I needed a complex metal bridge to connect the cans) so it now uses a Lidl Premium Ham can.

I hammered the cover plate from a bit of aluminium caravan siding and then drilled holes in it, but that only worked because the whole thing had a strong steampunk aesthetic

R
Gear cutting in a lathe.